This week was a busy one - we started off with another trip to the pediatrician to get the remainder of her 2-month vaccines and to remeasure Josie's head. As her head circumference had increased dramatically between her 2-week and 2-month appointments, the pediatrician had asked us to have it rechecked at this appointment. Two weeks ago her head measured 16 1/2" and this week it was 16 5/8", so that was good. She also gained another 4.5oz in the 5 days between appointments, and is now up to 15lbs 12.5oz. She got two shots this time, which were pretty rough. She cried and screamed pretty bad, and actually had some tears going too (she usually saves those for special occasions), but I was able to get her relatively calmed down before we left, and then she was happy and content during the drive home. She did get a slight fever the second day after the shots and was a bit fussy, but given that we weren't dealing with an ear infection at the same time again, the rest of the week wasn't nearly as rough as the first round of vaccines. [Not quite ready to go to the doctor]

However, this week she had gas problems instead, so she had some problems sleeping since she was so uncomfortable, even crying and kicking in her sleep for up to half an hour before settling down. The pediatrician prescribed Zantac for her since she suspects Josie has acid reflux, but we're not really comfortable with putting her on medication. So instead I'm eliminating foods that are the most common culprits of food sensitivities in breastfed babies to see if that will help first. I cut out dairy and soy immediately, and while she still has some gas, it's been much better than it was so hopefully that will continue to get better.

This week marked some big changes in her attitude towards her swing. She had been tolerating it more and more, and was up to contentedly hanging out in it long enough for me to eat lunch without having to scarf it down. On one of her bad nights of gassiness, Ryan had tried putting her in the swing and she actually slept in it for the first time. For four hours. Then I had her in it for lunch one day and she fell asleep again for about half an hour. Oddly enough, it now seems to calm her down now, whereas before she had to be calm when we first put her in it. So there have been times where she's fussing and not feeling up to being consoled by Ryan or me, and yet she'll calm right down when we put her in the swing. It seems like it should be the opposite, but I guess we'll go with whatever works!

For developmental changes this week, Josie is definitely reaching for objects and grabbing them more. She is my little helper when I take her temperature under her armpit, as she likes to hold the thermometer for me now ;) [Holding my hand and part of her morning stretching routine]

We also came up with a new game I like to call "Kiss the Squishy Baby Feet". It involves kissing her foot as it passes by while she's in her swing (kissing baby feet is also something I didn't think I would ever do - and how that changed once Josie got here, despite the horrors of the lint collection that I know resides between her toes). She found that game quite amusing, and then more interestingly to me, started lifting her foot up as it passed by me and staring at it, so I think she's starting to become more aware that she has feet and she can actually control them. She also seems to be able to see much further now - she normally stares straight off to the side when we're on our walks, but now has been looking up. Whether she's looking at the sky or trees, I'm not sure, but she seems to be more aware of the ceiling too (and not just the shadows of the ceiling fan), so I think she's discovering there is an "up" up there.

Josie also got her first haircut :( Just a few hairs, though, as she got a knot in her hair that we couldn't get out. So her little rattail she's working on is still intact at least! 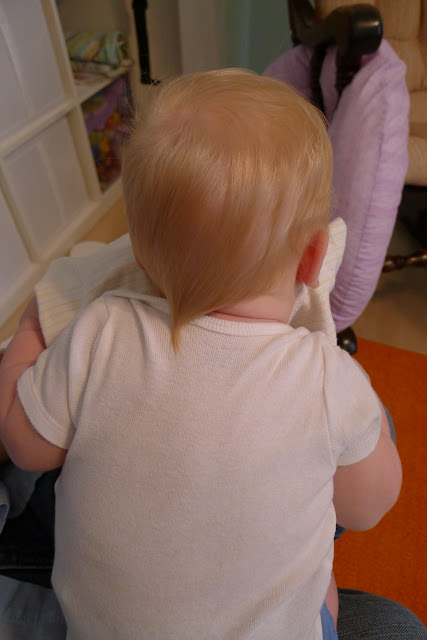 And finally, the biggest changes this week were that she started daycare and I returned to work. I was expecting to be an emotional wreck the first day away from her, so she actually started daycare a day early (on Thursday), and I spent the day painting at the rental house we're getting ready to put up for sale hopefully next month. I think since I hadn't returned to my previously regular routine, it still didn't seem that real to me, since I did pretty much just fine being away from her on Thursday... but then cried on the way to work on Friday and teared up each time I thought about her too much while I was at work. After being near her nearly non-stop for the previous 12 weeks (and carrying her for 10 months before that), I definitely felt like I was missing a part of myself to not have her around. Yes, it was nice to be able to eat and go to the bathroom whenever I wanted and not have someone crying at me, but the end of the day couldn't come fast enough for me so I could see her again (especially since I was exhausted and a little overwhelmed after emerging from the vacuum where I had spent the last 3 months).

Josie has done very well at daycare so far. Her daycare provider called a couple of times the first day with updates, which was so nice. Apparently Josie had refused a bottle at first, which concerned them, but after she fussed for a while and they got some gas out of her, she then did better and drank her whole bottle. I had been worried about her napping, and she actually slept close to two hours total for them the first day - although that was coming on the heels of a night where she got half as much sleep as normal since she was so gassy, so she was absolutely wrecked by time I picked her up at 5:00. She was sitting in one of the play rooms with the other kids, and while she seemed content, her poor little eyes were red-rimmed from being so tired. She started crying, so I tried to nurse her for a bit before heading home but she was just falling asleep, so I got her home, Ryan held her for a few minutes (where she actually accepted a pacifier for the first time in weeks, and even held it in her mouth on her own! Except she spit it out again as soon as she saw me), and then I nursed her down to sleep. She then slept from 7pm until we woke her at 7am, just waking a couple of times from gas and once from when I tripped over the scale in our bedroom - which was the first time she also flat-out refused a nursing. I offered, and she turned away and very clearly let us know she was not happy at being awake, and she wanted to be back asleep. Now. So I bicycled her legs in case she had any gas again, and she fell asleep while I was doing that, so back in the crib she went. [All ready for her first day at daycare]

The second day she slept less than the first day, but she was apparently happier, chatting and smiling. She also ate twice as much, so although she's still not too consistent with taking a bottle at home, hopefully she'll be more amenable to it at daycare. They had tried to keep her upstairs away from the other kids so it would be quieter, but ended up running back and forth too much so they moved her bassinet into one of the downstairs rooms and her bouncer/crib into the other. While that's probably not helping her nap at all, since she's been content to spend most of the day just watching the older kids play (she's the youngest, but the other kids are all under 3), I think the activity may be good for her. She definitely seemed more interested in watching other little kids more so than adults, and since she usually doesn't hang out quiet and content for us for hours at a time, apparently the activity there is more engaging and entertaining for her. But while I don't want to complain too much about this, since it is really nice to get a nice chunk of sleep (and this probably won't last for too much longer anyway as she adapts to her new routine), it is a little sad that she's so tired when she gets home now. So for the two days she's been at daycare so far, she was awake with us for about half an hour in the morning, and then for about an hour and a half in the evening... and of those times, all but about 45 minutes of that was me nursing her anyway, so we haven't gotten much playtime in with her lately. We'll see how this next week goes though - the first full week of daycare and work. Eek.

To finish this off, here's a fun trippy picture of Josie and my mom: And Josie kicking and squealing: