We came to the realization in the last month that Josie's toddlerhood kind of snuck up on us.  She doesn't have tantrums or anything (yet), but has developed an ability to suddenly go limp and lose all of the bones in her body (causing me to almost drop her several times now), and telling her "no" can prompt a truly pathetic bout of (fake) crying, sometimes culminating in her sobbing face-down on the floor.  She's still usually happy and funny and exuberant, but just has some moments of contrariness now.  And although I knew to expect this starting from several months ago, it just didn't click that Josie had in fact hit this stage of development until I realized that I had been a little bemused by how "erratic" she's been the last few weeks, when really she's just being a toddler. [The lovely face she makes all the time now - courtesy of me, I think]


After having a relatively healthy winter so far (at least compared to last year), poor Josie came down with RSV, strep, and an ear infection all at once :(  Since two out of three of her ailments were contagious, we all ended up staying home for a week, which was pretty rough on all of us.  The first couple of days she was really hurting, so her sleeping suffered (with her waking as frequently as every 20 minutes overnight, and sometimes not napping at all during the day) and she was just miserable.  She also hardly ate or drank at all, which was unsurprising but still worrisome.  So she basically just subsisted on a bottle or two of milk and a couple of sips of water a day (down from 4-5 bottles, plus water), and as many lima beans and grapes as she would eat, since she wouldn't touch anything else.  And then when she started feeling better midweek, we ran into a new problem of trying to keep her entertained when we were housebound and trying to work some too. 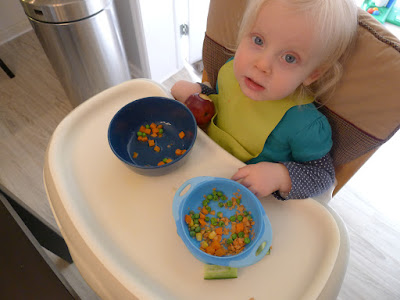 [Mimicking Ryan in his attempts to entertain her]


Josie has added a few new words this month - and while she's not breaking any records with her language acquisition, I've been doing pretty well so far with not geting panicked when I hear how many more words other babies her age can say, since Josie has proved over time that she may be a bit slower in certain areas (e.g., walking, teething, talking), but she is still hitting her milestones just fine.  I think she's just more cautious and deliberate when trying new things, which doesn't initially seem to mesh with how outgoing and confident she normally seems, but I think it's also easy to overlook that she has a more serious (and shy) side too.

So Josie now says "hi", "bye", "up", "down", "all done", "open", "door", "stop", "mine", and "no" unprompted and appropriately (some she had said before but not always in the appropriate context),  as well as "elbow", "hair", "eyebrow", "elephant", and "stuck" when prompted.  She also called out "yaya" whenever I left the room a couple of weeks ago, and I was thrilled that she was calling for me, and would correct to "mommy" when prompted.  However, last week her favorite lady from daycare walked behind the car as I was buckling Josie into her car seat and so I asked her to say bye-bye to Ana, and Josie immediately yelled "yaya!".  So no, she wasn't calling for me (and still doesn't), but at least Ana was thrilled by this development instead ;)

Josie is also getting better at non-verbal ways of communicating, and will sometimes try to open the fridge if she wants her milk, or will go over to her high chair if she's hungry.  She has also started grabbing us by the hand to bring us to what she wants, although she's a bit hit or miss sometimes with whether she has fully thought out her plan.  She does well bringing us to her crayons, but she has also led me around just to stop without any goal or destination in mind (as far as I can tell, at least).  So these are all very positive things to help her communicate with us, and hopefully she'll continue to figure things out soon.... especially since she has been biting other kids at daycare lately :(  It seems to be mostly when other kids are annoying her or stealing her toys, so I can understand why she's biting if she isn't able to communicate effectively otherwise, but it still obviously doesn't make it all right.  She has just started to say "no!" and "mine!" to the other kids at least.... which normally I wouldn't be all that pleased about but it's so much better than what she has been doing.  We'll tackle sharing on another day ;) 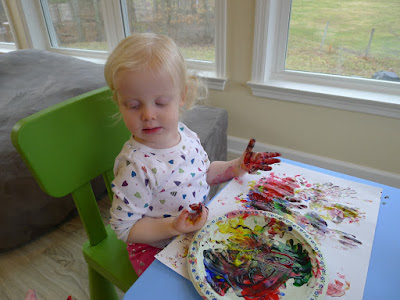 [First time painting at home with me] 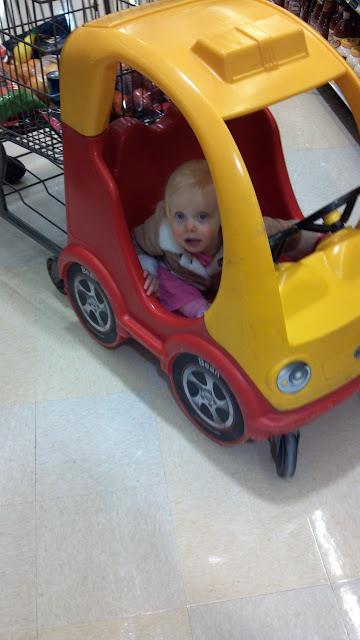 [Another first - she was far more excited than she seems to be here, squealing around the corners and shrieking whenever she saw me] [Hanging out in our shower with my shower cap on] [Trying to hand me an invisible piece of... something] 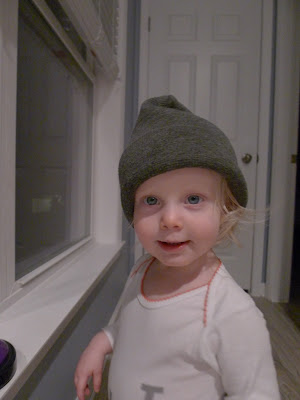