Well, I was hoping it would be a little more clear-cut, but we're going to go ahead and call it anyway: we have a crawler :) While Audra is not motoring around with hands and feet working in coordination quite yet, she definitely is moving both her hands and feet now - and even doing a few little frog hops - so I think that's close enough :)
Audra is also babbling a lot more now too. Putting her down to bed has gotten even more difficult, since now, just as she's drifting off to sleep, she'll suddenly pop up again with a string of "bla bla blas", along with her compulsive need to get on her hands and knees and rock back and forth. We have little conversations of babbling at each other, and I think I may have surprised her a bit with how excited I got when I said "aaah bla" to her, and she responded with a very clearly enunciated "aaaaah BLA!" Too cute.
And if that weren't already enough, we met our preliminary goal of exclusively breastfeeding for her first six months, so we started introducing solids this week. We're doing the Baby-Led Weaning method again, so we'll just be starting out with giving her fruits and vegetables and whatever she's able to grab from our plates for her to feed herself with. The actual ingestion of the food is less important than the experimentation at this point, which was a good point to keep in mind since Day One of solids was a bit anti-climactic: after everything she can get her hands on making an immediate beeline for her mouth for weeks, we expected the same once we gave her some food. But instead, it was like a little switch flipped with her, as she went "ooooh, food" and proceeded to squish it between her fingers instead, with only the bits stuck to her thumb when she took a thumb-sucking break actually making it in her mouth :) 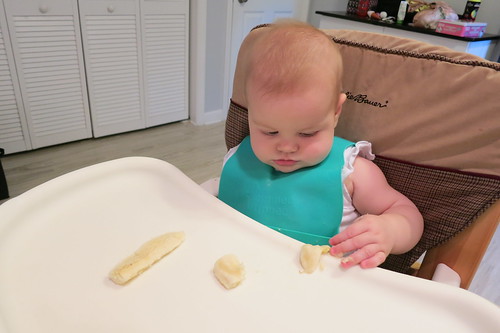 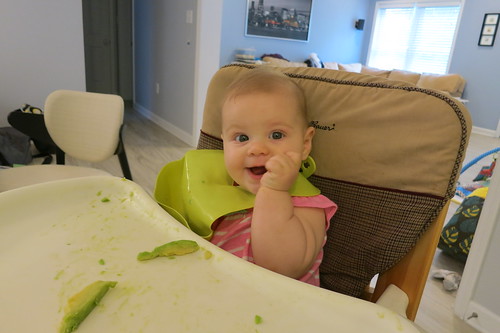 So bananas and avocados were mostly just squished, although she has gnawed on an apple a couple of times since then too. She loved sharing an apple with me (although I have to admit I didn't really eat it after she left copious amounts of drool all over it during her turn), holding onto my hand with hers as she gnawed away on it, pulling away to make a face and then attacking it again with a grin :) She did actually break little tiny pieces off of the apple and then proceeded to gag it all right back out, so I'm not sure that she has actually swallowed any food yet, but that's just all part of the learning process right now. 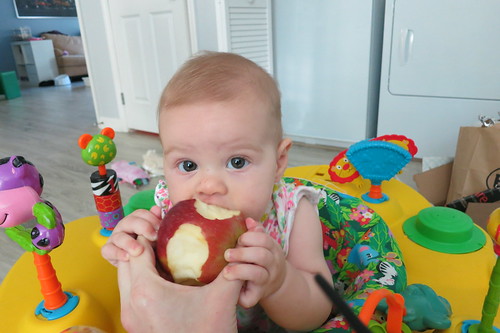 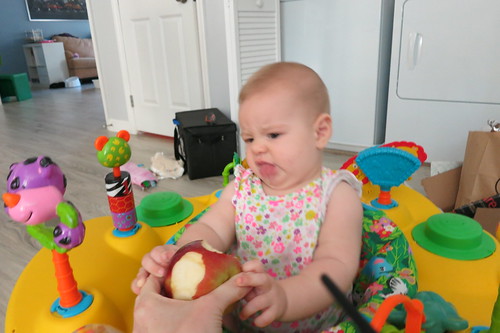 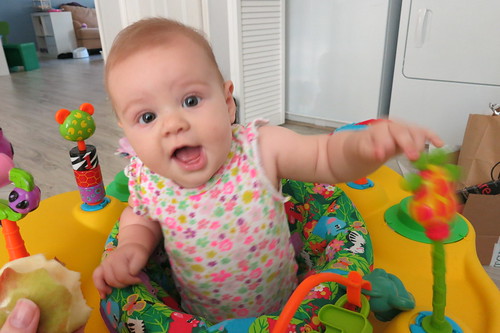 Audra appears to be in a "stranger anxiety" phase, which unfortunately seems to include anyone she just hasn't seen in a few weeks. She cried for Ryan's parents when she saw them for the first time in almost a month (before smiling and babbling for them later), she was on the borderline of smiling and sad crying for my mom at first (who she had seen just two weeks prior), and she apparently gets quite upset by anyone outside of the core group of caretakers at daycare. She has been a bit clingy lately, and is still getting very upset whenever we walk out of the room. So while she's usually quick to laugh and smile still, she's also equally quick to flip that switch. All of this is sort of unsurprising to me, though, as she is going through all of these other big changes, and we're her safe, stable place... so while it's not always possible or all that convenient, we're trying to just hold her more in hopes that will help ease this phase for her.

We're back to Audra waking about every 1-2 hours overnight again, although the silver lining for this week is that she was actually able to get herself back to sleep on her own a few times overnight after just a minute or two of fussing. As I mentioned above, getting her down to sleep for naps and nighttime is more difficult now, since she's not falling right to sleep while nursing and will often pop off and on a bunch of times. I usually cut her off when she does that so she doesn't get a belly full of air, but then she just gets really upset since she's usually already overtired now since she's having more troubles sleeping. It's a bit of a vicious cycle.

I also tend to go through cycles concerning Audra's sleep, from fighting it and getting really frustrated with the situation, to accepting that it is what it is and will pass soon enough, to even cherishing the extra time and contact we have overnight. Unfortunately, I'm in the "fighting it" stage at the moment, although since I've been feeling a bit defeated lately, hopefully acceptance is just around the corner ;) I'm also trying to get as much sleep in as I can, so I've just been going to bed with Audra a few times a week around 7pm, which somewhat helps, although I've had a few nights recently when I just couldn't get to sleep, which pretty much defeats the purpose of going to bed early.

Anyway, it has continued to be so neat to watch the relationship between Josie and Audra. Audra just lights up whenever she sees Josie, and her daycare provider even commented on it, since Josie went with Audra to daycare when her school was closed for a day last week . Apparently Audra does react much differently to Josie than the other kids, and would just smile and laugh at her even when Josie wasn't doing anything :) Josie was even able to calm Audra down one evening this weekend - it was the end of a long day of fighting naps, so Audra was an overtired mess as we were trying to eat dinner. Josie kept trying to play with her and entertain her, and eventually her persistence paid off - Audra stopped crying and even started smiling. Ryan and I weren't even able to make the slightest difference in calming her down, so this was pretty amazing to see. 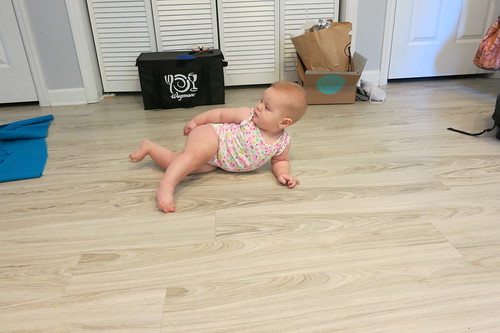