It looks like I broke my streak of only being up to a month late for the monthly updates, since it's now April and I'm just now getting to write the February Josie update :( The March update will follow... sometime.

The big excitement from February was that we did a spending challenge ("Frugal February"), so that led to some changes from our normal routine. We usually eat out for every lunch and dinner on the weekends, and are pretty quick to make use of our Amazon Prime subscription, so we decided to curb all discretionary spending for February... meaning, no eating out (unless it was free, so birthday parties (with presents bought in January) were ok), no clothes, no costs of any kind beyond groceries and other necessities. Naturally, things immediately started breaking (the greenhouse, my phone, the kitchen faucet, Ryan's car), but beyond that, it went really well and was a bit easier than expected. It made us take a much closer look at what (and how much) we're eating at restaurants, as Ryan did all the cooking on the weekends for us, and will hopefully make us think twice before we buy whatever the latest thing is that we've decided we need from Amazon.

We also made good use of the pool passes my brother and sister-in-law gave us for Christmas, with Ryan and Josie going swimming nearly every evening and the entire family going on the weekends. As it turns out, Audra's skin reacted pretty badly to the chlorine, so she and I skipped the last weekend once we finally made that connection, but our goal with Josie was just to get her more comfortable with the water and it seemed like that definitely happened over the course of the month. So she went from crying just about every time her face got wet to being able to go underwater -- with her eyes open! -- and grab rings from the bottom of the pool :) She doggie-paddled a few feet on her own, but that's about it so far on actually swimming, but she blows bubbles and is starting to figure out how to move her arms and legs to be able to stay afloat, so we'll see how much more she improves once we're at the lake for a week this summer :)

February was also Josie's first full month in Pre-K. The first few dropoffs didn't go super well, with her quite upset - while she willingly walked away from me, she was slumped over and dejected, which just broke my heart :( A boy from the older Pre-K class also called her a baby during her first week, and perhaps I was already overly sensitive about her age since I was/still am second-guessing our decision to move her up to Pre-K when she was a bit young for Preschool anyway, but I totally told on that kid and he got a talking-to by the teacher :-\ Dropoffs started going much better after the first week, though, and her teachers continue to assure me that she is fitting in very well with her class, academically and socially, so it seems she'll do all right. In fact, they were quite impressed by her attempts to sound out and spell different words on her own, and her interest in writing different words, as she asks for help spelling anything she can think of. 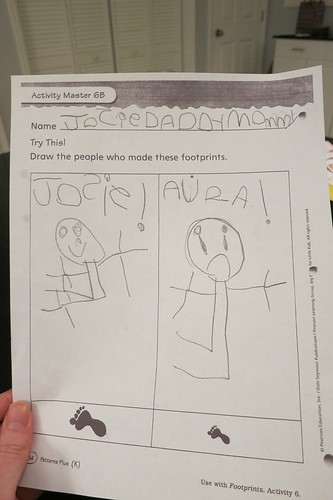 [Poor Audra is crying in most of Josie's pictures :-\]

As seen above, Josie had been working on trying to spell "Audra" but kept forgetting the "d", but she can proudly spell it correctly now, and has moved on to learning her and Audra's middle names :) She does like to write every name she can spell on her papers, so -- also as seen above -- her "name" is usually "Josie Mommy Daddy Audra" at the moment :) She also continues to enjoy the "kitty game", which has led to some days where she insists on only communicating via meows. She has extended the game so it's not just her playing, though, as she'll now ask "Who wants to be my kitty or doggie, raise your hand!" and then we all have to volunteer. I'm usually the kitty, Audra is the doggie, and Ryan is.... the treehouse. Hey, he picked it. I also walked into a whole herd of baby kitty cats crawling around when I picked her up one day from school, although it wasn't clear if all of the girls played that game anyway, or if Josie was the/an instigator.

The weather was a bit crazy in February, since it ranged from Josie being able to actually play outside at school (they haven't sent them out when there's been snow on the ground this year) to it being cold enough that our pond froze. So she gets to play on a new playground now, since she moved up to a different playground for Pre-K too. This one has a tire swing, which appears to be her current favorite, although it also caused a reappearance of her motion sickness since she threw up after spinning around on it a little too much :( So we had a talk about recognizing when it's time to get off the tire swing, and the three ideal locations to aim her throwup (including the barf bag I've kept in my car in case of emergency, given how bad my motion sickness has been ever since my pregnancies). And then a week later, we had almost a foot of snow and Josie got to make her first snow angel. She did not like it one bit at first because she got all wet, but after putting on her snow pants she was dropping every couple of steps to make a new snow angel :) 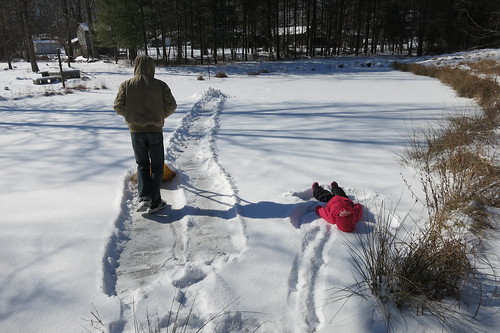 [Ryan inexplicably shoveling the pond, and Josie making yet another snow angel]
As far as developmental stuff, Josie suddenly seemed to have gotten very good at her puzzles and word search games, so I initially suspected she had just memorized them but now I think it just clicked for her and she "got" them better. She also legitimately beat me at a memory game, although shortly after that she realized if she laid out the cards that she could just put the matching pairs right next to each other, which makes it so we're more consistently evenly matched but also makes the game significantly less interesting (for me, at least - I suspect she's ok with it). Josie also seems to be impressively good with delayed gratification - we suspect she'd ace the marshmallow test ;) She gets a cookie every Friday from school, and she'll hold her cookie the whole way home (since we don't normally eat in our cars) without trying to sneak a single bite. She just seems to like to hold onto whatever it is I've told her to wait on (food, stickers, whatever), and seems to be fine dealing with any temptation.

We also tried some different foods for February, especially since we were eating at home much more than usual. We've been putting more thought lately into the quality and source of the food we're consuming, so in preparation for Frugal February, Ryan went out to a local farmer and picked up a whole bunch of different cuts of grass-fed and -finished pork and beef for us to experiment with. We've been reading more and more about how lard is not actually as bad as we've been taught it is, so one of my requests was for him to get some back fat so we could render our own lard... which led to me spending an absurdly long time cutting it away from the skin and then it becoming very apparent that I had severely underestimated how long it would need to be in the crockpot (we put it in around 4:30pm, and Ryan checked it several times overnight, finally considering it done around 3am). But now we have a couple containers of lovely white lard, which we've been happily (and deliciously) using for cooking ever since :) 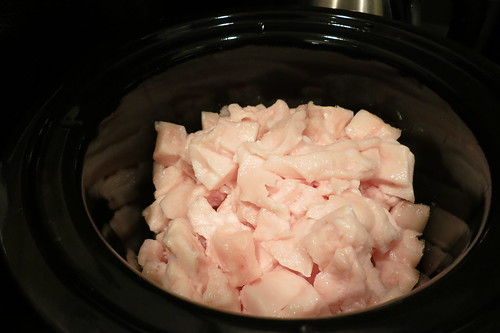 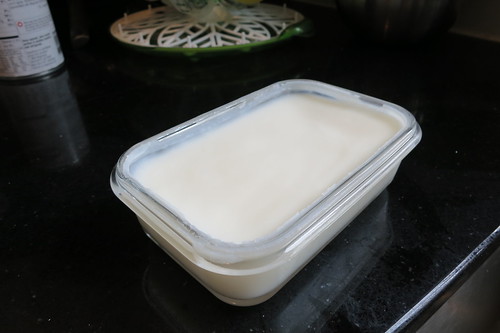 We also learned the hard way that there is such a thing as too many cracklings. We had maybe a good-sized bowl full of solid bits left over after the fat had turned to liquid, so we fried those up and ate the whole bowl.... when a couple of bites for each of us probably would have been more than sufficient. Josie only had a few pieces and seemed to fare better than Ryan and me, as we felt a little gross the rest of the day and then barely ate any dinner. They were still delicious, we just need to pace ourselves a bit more! Also new for last month, given the abundance of snow we had available to us, I explained the nuances of eating snow to Josie (eat the snow that's white and doesn't have any footprints in it) and then that's pretty much all she wanted to do after that :) We gave snow cream a try too, and she certainly seemed to like it, since she kept adding to it and asking for seconds. 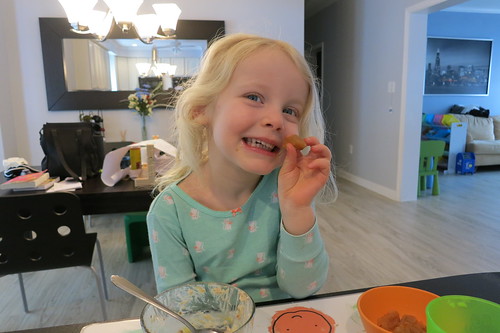 Josie also had plenty of funny things to say last month. I told her I loved her one morning, and she flatly answered "Good." Not quite the response I was expecting! She also called me out on my driving when I had stopped short and her head came forward off her seat - she said I wasn't following the rules, and "no, thank you" to making her head go like this.... and then demonstrated (repeatedly) her head falling forward. She got into it with Ryan one morning since she was being poky and not getting dressed, and it clearly stayed on her mind since she brought it up on her own in the car on the way to school. She told me that she got so mad at Daddy, and he was grumpy, angry, and roared at her (this was perhaps an overstatement). I suggested that she and Daddy hug after school and say I'm sorry for being grumpy and roaring and for not being a helper, and then they'll be ok, and she was like, naw, I'm ok now. Well, then. And finally, Ryan and I wearing smart watches has apparently rubbed off on her, since she yelled "ok, Google!" at her (pretend) watch on her wrist, and asked it if Chick-Fil-A was open :) 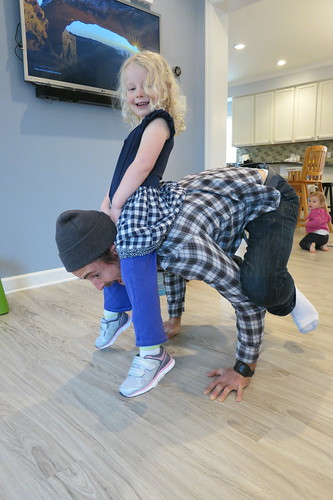 [Helping Ryan with his yoga] 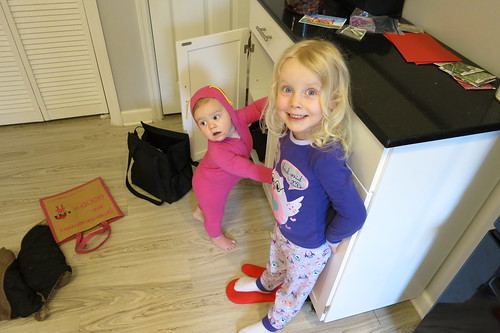 [The picture of innocence] 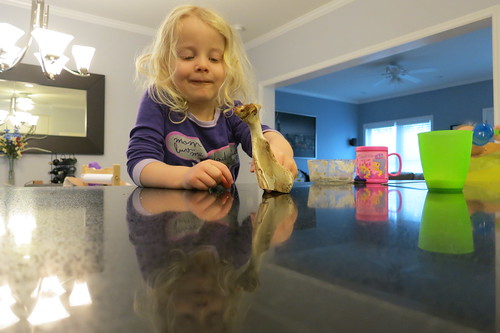 [Playing with a shoulder bone, naturally] 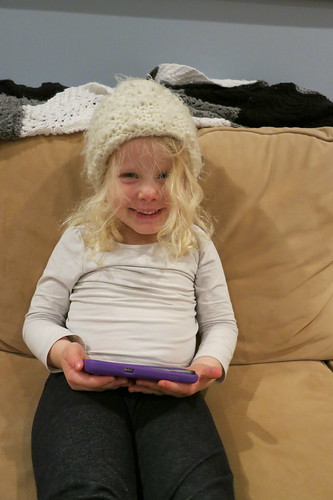 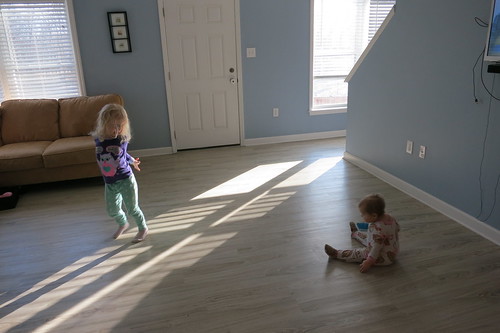