Although not quite as bad as Audra's March, Josie got pretty sick in March too. She had the worst case of pinkeye she's had so far, with both eyes pink, watering, and goopy, but at least it responded readily to the antibiotic eyedrops. And then a couple of weeks after that cleared up, she had eye problems again - after tripping on a rug at school, she landed face-first onto her cot, so she was sporting a black eye for a week or two :-\

But really, the big news for March was this: 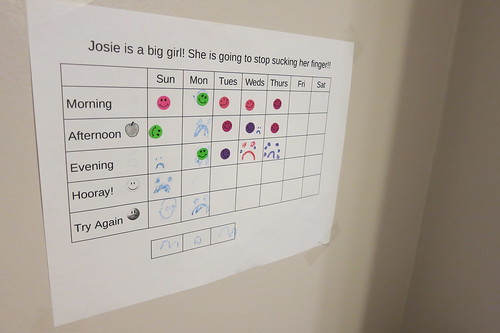 We decided it was about time for Josie to stop sucking her finger, and after doing some research of various methods (and, unfortunately, drawing from personal experience, since I sucked my thumb for a rather absurdly long time), we came up with a plan. First, we got her on board, and she agreed that she wanted to try to stop sucking her thumb entirely, including for naps and bedtime. Then we did the sticker chart, and had her pick out her special prize (her very own Legos that Audra is definitely not allowed to touch) that she'll get after she stops sucking her finger.

As seen above, her first sticker chart wasn't exactly a success (in part due to the fact that Josie added to it herself, and gave herself more sad faces than she needed to), but she still progressed more quickly than I was anticipating. A couple of weeks later, and she has entirely dropped her finger sucking during the day, although falling asleep for nap and bedtime (and sometimes overnight) is still a struggle.  She is coming up with different techniques to avoid sucking her finger, though (like sleeping with her hands clasped together under her chin, or holding onto a stuffed animal), and we're just really impressed with how well she's doing. It's also been an adjustment as we get used to seeing her whole face now, without part of it obstructed by her hand at any given moment ;)

So in some ways, Josie felt more grownup last month, but in other ways it seemed like she was going through a regression. She went through a week of having accidents again (to the point that we finally just took out the rug in the bathroom because I was getting so sick of having to wash it every other day), and then stopped eating as well as she normally does, only eating 2-3 bites of dinner before declaring she was done for a few nights in a row. And before we started on the no-finger-sucking campaign, she went through a few days of sucking her finger even more than usual, to the point that even Audra started pulling Josie's finger out of her mouth ;) But then on the flipside, she appears to be starting to drop her naps. She used to sleep for a solid 3 hours on the weekends, but now she's only sleeping around 1.5-2 hours, and she apparently almost never naps at school now. It used to be very apparent when she skipped nap at school since she would be a crying mess by dinnertime, but since there's only a slight increase in her emotional volatility lately, it appears that she's able to cope better without a nap now.

Also noteworthy? The fact that she had TWO no crying days in a row. This is one thing I wasn't really expecting with having kids. I expected crying when they were little, but wasn't really anticipating that there would still be daily crying nearly four years later... So, for several reasons, I particularly like the days when Josie can make it all day without any tears :)

Backing up to the beginning of the month, we had Audra's birthday party, which Josie was super excited about. She asked just about every day when it was, made some of her own decorations for it (although they're now hanging in Josie's room instead), and nicely helped blow out Audra's candle for her :) 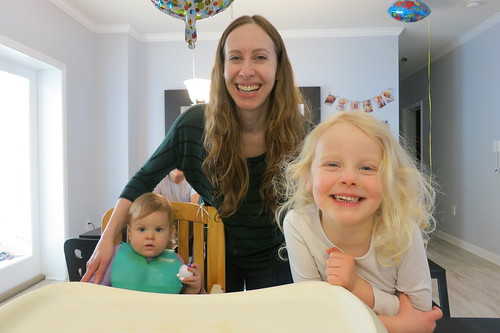 We also had one more snowstorm for the winter, so we finally got around to building the first snowman of the season, and not a moment too soon... unfortunately. Since Ryan had already built up a big pile of snow in the middle of the pond, they just used that as the base and so we had a snowman in the middle of the pond for a brief moment in time. The very next day, the temperature had warmed up so much that the pond wasn't safe enough to go back out on it to collect the snowman's accessories, so we thought his nose, hat, pipe, and the rest of it was gone forever. And then maybe a couple of weeks later, I caught sight of the carrot on the bank of the pond, and was able to wade out into the muck (unintentionally, in ballet flats) and retrieved maybe half of his stuff that had washed up on the sides rather than draining out to the Potomac. So that was exciting :) 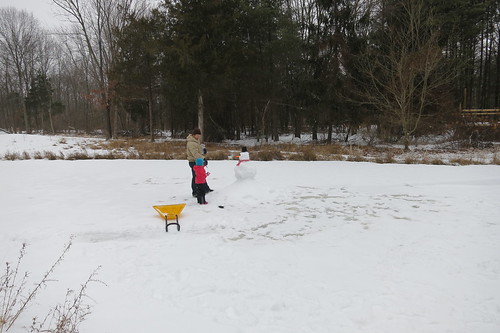 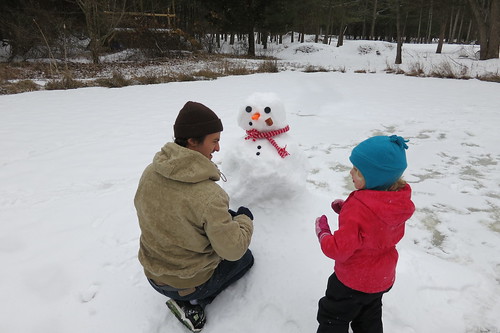 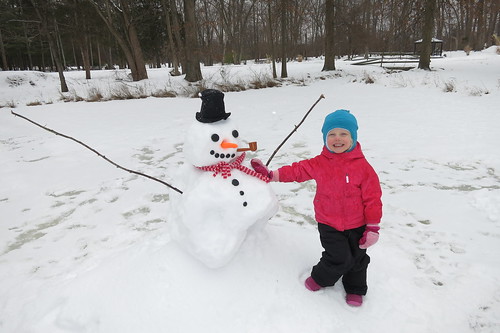 We had another parent-teacher conference too, and her teacher said she's very independent and doing very well academically, but doesn't always listen or comprehend instructions, and will just go ahead and does what she wants before she knows what the instructions are. Ryan and I were pretty ok with this, though - Josie is normally quite the rule-follower, so seeing that she's thinking for herself isn't the worst thing that could happen ;) Also, since she still is only 3 (which her teachers didn't realize), that may also be why she's not quite able to understand the instructions, if they're just a little beyond her current comprehension.

That said, Josie continues to be more inventive and her learning really seems to have accelerated after she moved to Pre-K. She has been much more descriptive with her storytelling lately, and I always like when she uses words like "otherwise" and "actually" correctly ;) We've been able to start doing Mommy/Josie outings again on occasion, and although they're not all that fancy, it's still so nice to get some one-on-one time with her again. So one of the times we went to Wegman's, and she helped me pick out some chocolates to contribute to my coworker's candy dish. Since we bought two bags, she thought for sure that we'd keep one of the bags and give the other away, so it took some convincing before she finally believed that we were in fact going to give away two. I thought that was the end of it, until over a week later she decided to make a "popsicle" out of some construction paper, and asked me to bring it to my "friend at work with the two bags of chocolate". But then... my coworker wrote Josie a card back and sent her some little gifts, so Josie tried to keep this exchange going, by promptly writing a card for another of my coworkers who she somehow remembered from her one visit to our house just after Audra was born ;)

Speaking of Josie's memory, she also got a haircut for the first time in almost a year (I still haven't cut my hair since before Audra was born... pretty sure I'll get that taken care of this year, though. Maybe.). She did great for her haircut, and yet somehow remembered that she also got a lollipop the last time she had a haircut, and of course wanted another one. She is also getting more adventurous physically. Josie was never really one to push her limits with climbing, crawling, etc., as a baby, which has held true for the most part through her first 3 years. She is starting to get a little less cautious on the playground, though, and has finally started to climb in and out of the various cribs in the house. Better late than never, I guess ;) When we remember, we also set Josie up with some kids yoga videos on Wednesdays, which she enjoys and has gotten pretty good at now... even when her baby sister isn't exactly helping. 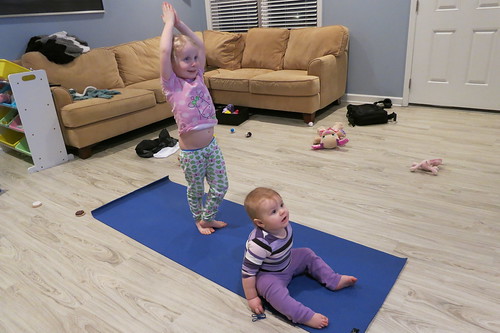 Josie's sillyisms for the month included listening to her cousin talk about wanting to go to Ohio during dinner, until Josie finally grabbed my wrist (her signal that she wants to talk so she doesn't interrupt - this is a work in progress still but is a beautiful thing when she remembers!), and then when it was her turn to talk, asked "What does Ohio even mean?" and shrugged her shoulders, later following up with "But Ohio doesn't even mean anything!" And then we blew her mind by telling her she had even been to Ohio before, and in large part because of her (see recap here), we hope to never set foot in Oberlin, OH again ;)

Josie also got sick at school, and threw up in the boy's bathroom (unclear why she was in the boy's bathroom, but that's probably her favorite part of the story). We had a nice chat about what we should aim for (pun not intended) when getting sick, and she's now proud to list off the three appropriate places (basin, bag, toilet), and was quite excited to learn that I had thrown up before, and asked if she could see a picture or video of it, since that's normally what we'll do to illustrate things we're talking about... which led to another nice chat about how people don't normally like to document that sort of thing ;) She also told me one day that I had a really big belly and that my eyes were little, and asked me if I wanted to see "the beautiful, beautiful under my tongue". Ha! No. 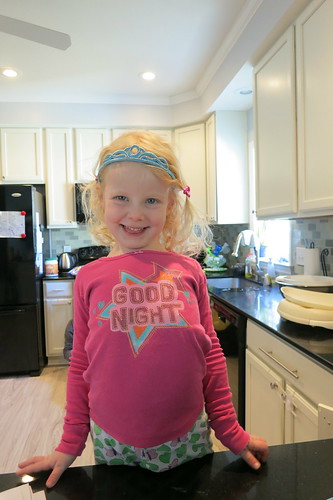 [Apparently all you need to be a princess is a tiara and two barrettes ;)] 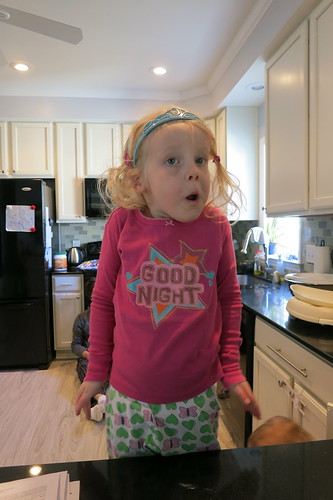 And finally, after several months of taking ballet classes through school, she's now starting to share what she's doing in class. So now she'll be off practicing the different positions in front of the mirror, or showing us dance moves. I especially like that there's apparently punching in ballet (to be fair, it's mixed with some other dance styles too), as seen in the video below ;) She still is a little funny about changing into her dance clothes for class, though... and apparently changing out of them. I asked her where her dance clothes were after school one day, and she said under her clothes - and then promptly ran away from me, giggling, when I tried to confirm. Once I finally caught her, sure enough, she was wearing her leotard, tights, and skirt under her regular clothes... AND she was wearing her ballet shoes INSIDE her regular shoes. She truly is one of a kind :) 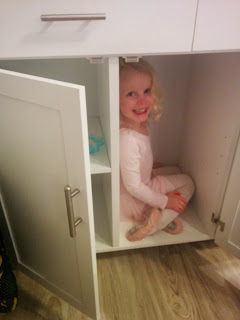 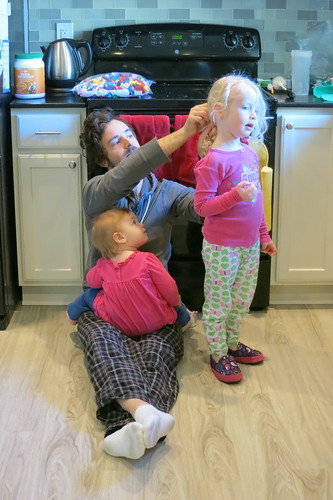 [A typical weekend sight - Josie still in her pajamas, Audra sitting on someone ;)] 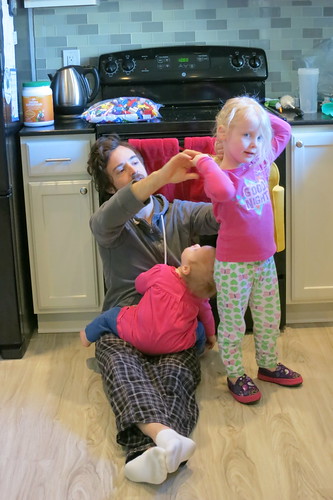