In June, we were all very excited to welcome my new nephew Benjamin to the family :) The blonde hair reigns again, and I was floored by how much he looked like my brother... although now that I look at these pictures again, I see far more Emily in Benjamin now than I did at first. Either way, he's absolutely adorable and so sweet. <3 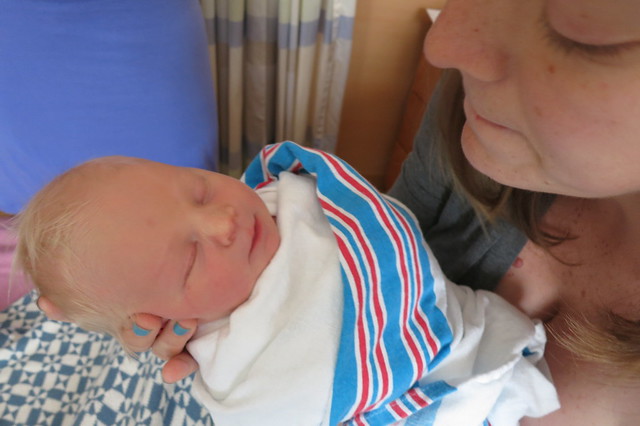 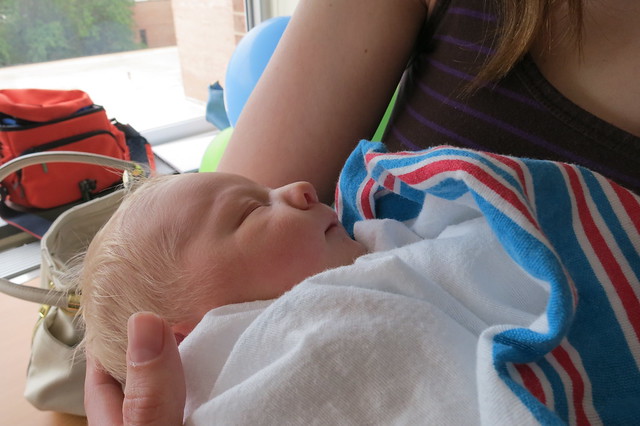 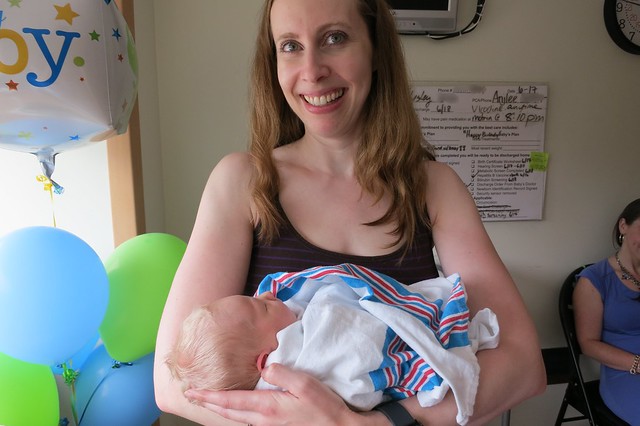 Speaking of birthdays, Josie was extremely excited about her own. She loved her birthday invitations, although, note to self: hand-writing all the invitations is not a winner (it took hours). We ended up inviting all of the kids in her Pre-K1 class before the end of the school year, and then the new kids who moved into her class at the start of summer, plus other friends and family... so, yes. Lots of invitations. And then Josie took it a step further, and basically every day after we distributed the invitations she came up with "cards" to give to her friends, or endlessly created lists of everyone she wanted to invite to her party.

One of her friends had a pool party to mark the end of the school year, so we all went to that and had a great time. It's so crazy to me to see Josie gradually getting more independent, and that was quite apparent when Josie went off to play with her friends and rarely needed our attention at all. She was much more hesitant with trying to swim, though - while she had gotten much more comfortable being in the water after her pool-intensive February, it took some cajoling this time for her to put her face in the water or jump in (with assistance). We had hoped to have her closer to swimming before our lake vacation in July, but I guess we'll just have to take it that she's more comfortable in the water at the same time that she at least seems to know her limitations better.

On a related note, we got out the cot for her to try sleeping on before we brought it to the lake, thinking that Josie would just sleep on it for a night so we could make sure it was comfortable enough for her and that she'd stay on it. Instead, she apparently loves it enough (or perhaps it's more that she's able to sleep in Ryan's room with him) that she has slept on it every.single.night since then.

It appears that Josie is completely done with napping at school; she has even been moved to the "non-napping" side of the room :-\ And after telling us what we wanted to hear for a while, she now is readily offering up that she did not, in fact, nap at school. Like one evening when I asked her if she took a nap after she started crying when I wouldn't let her bring a snack home from school, and she said no, then wailed "I only take a nap at hoooooome", and threw herself in my arms in despair. She went to bed an hour early that night.

After several weeks of seeming like she was done with sucking her thumb for good, she started sucking it again on occasion. It seems to have coincided with the end of the school year/beginning of summer, when most of the kids in her Pre-K class graduated and the Preschool kids moved into her class. She seemed to regress for a couple of weeks, with not using her words and just crying instead when she's upset, singing instead of being quiet when asked, refusing to participate in activities, and, of course, sucking her thumb. I suspect that was just due to the changes at school and her new classmates needing to get used to the rules and routines in Pre-K, and she's doing a lot better now. 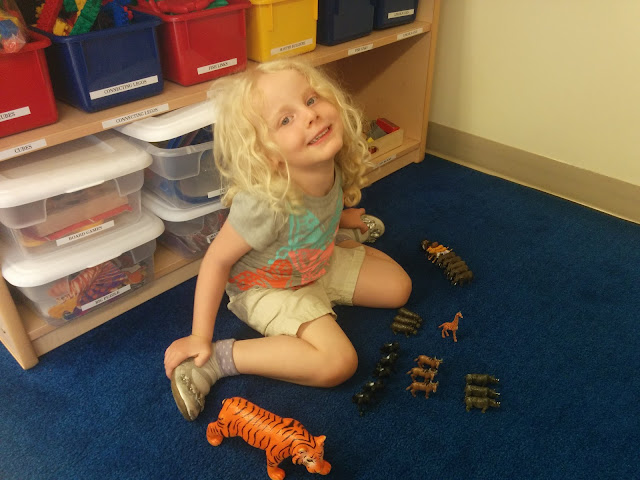 [She has important animal organizational work to do at school] 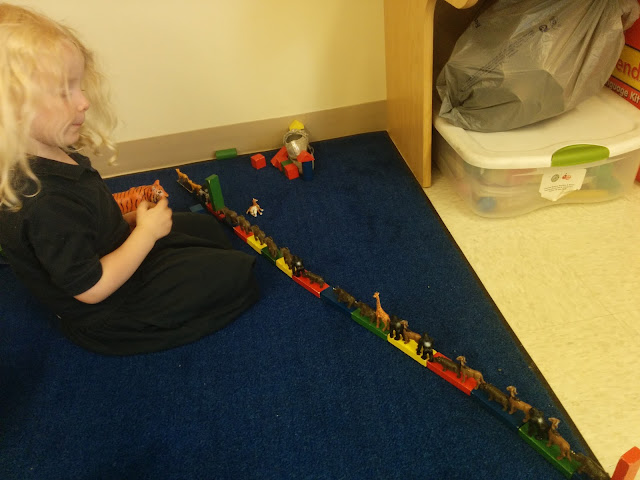 Josie rather astutely pointed out that she never gets angry, which, after I thought about it more, seems to be pretty accurate. Sometimes she gets a little mad, but it's so short-lived -- and a lot of the times she's just pretending to be mad -- that it hardly seems to count. Instead, she just gets sad and cries pretty easily, but yeah. She is a pretty happy and goofy kid :) She's also getting more affectionate with Audra, hugging her and linking arms with her. Josie also stroked her face and told Audra that she was so sweet... which prompted me to tell Josie the same thing :)

Josie discovered her new favorite "sauce" that she likes to douse her food in: olive oil and vinegar. She requests salad quite frequently, and while at first it was almost entirely due to the toppings (e.g., almonds, cranberries, etc.), it seems to have shifted somewhere along the way to her really liking the dressing. So her poor salads tend to be swimming in olive oil and vinegar, but she eats it all... and then drinks the remainder from the bowl.

We all went to an animal park, which was also pretty fun. Josie ran off and made friends, hanging around on the different play trains and ships they have there, and spent a decent amount of time in the moonbounce. She also proved to be rather resourceful - I didn't want to shell out for the cup of animal feed, but she quickly realized that mounds of the feed were around each of the enclosures where the animals/kids had dropped them.... so she scooped them up and got to feed the animals herself ;) We also rode on a camel together. I don't know if I'm slightly proud or embarrassed that the picture below seems to show that I had proper equitation even on a camel ;) 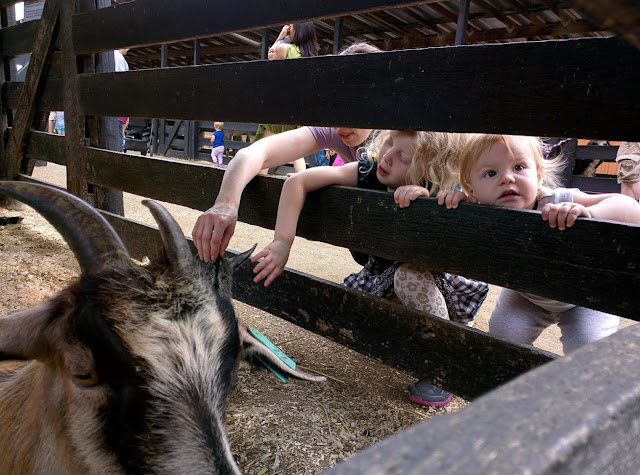 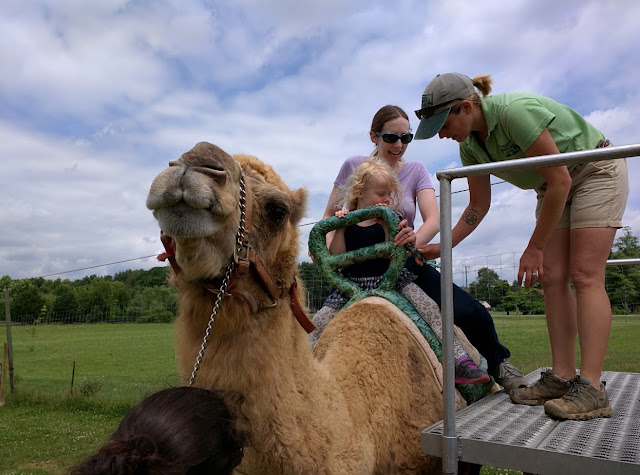 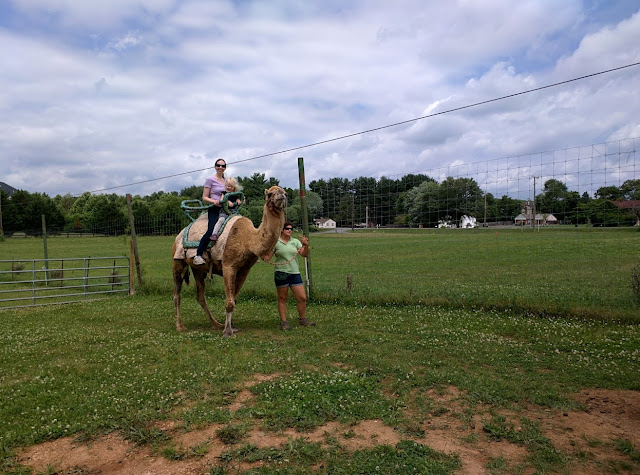 Silly Josie-isms for the month:
As an update for the house and garden, Ryan built another terrace in the front of the house, and then moved the blueberries to their permanent home there. With the fence, the small area, and how close to the house it is, we're hoping that all will be enough to deter the deer. Ryan has also been gathering rocks from around the area, and we're planning on the front part being sort of a rock garden, eventually with more plants in there too (we're counting on some mint to take care of filling in the gaps). To be honest, I wasn't too sure about the rock garden at first, but we've added a bit more since these pictures, and with the addition of some dark mulch, I think it looks pretty sharp.... and will hopefully require hardly any maintenance ;) 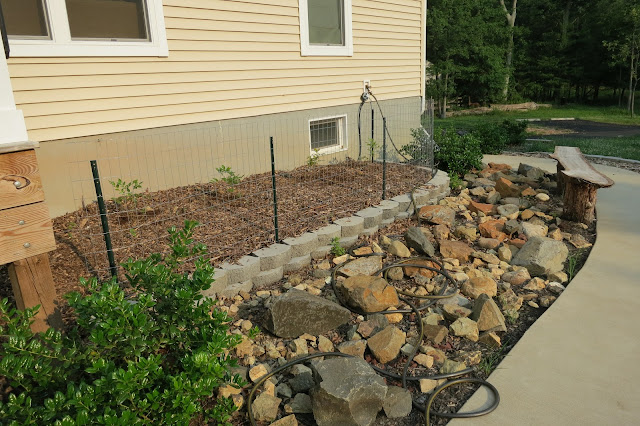 Apparently one of our biggest (literally) crops for the year was marigolds. We had planted marigolds before at our last house and those only grew to about 5-6 inches. We expected that they would do slightly better in our garden now, since they were planted in almost pure compost, but they well exceeded that expectation: over the course of the month, they grew from nothing (as seen in the first picture below) to several feet high. Lesson learned, and next year we will not be planting them in the raised beds; they ended up taking so much space and shaded the other plants too much. I had also planted them as trap crops to try to attract the pests (i.e., Japanese beetles, the current bane of my existence), and while they were certainly overrun with them, I'm not sure if they were luring the bugs away from our other crops or just attracting them to the general area. We'll do some experimentation with the placement of the marigolds next year to see if maybe that makes a difference with how bad the bugs eat all the leaves on our other plants. 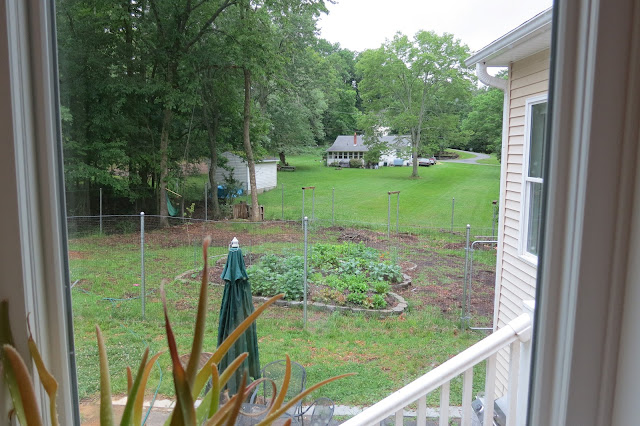 [As it turns out, I love having this view from the kitchen window] 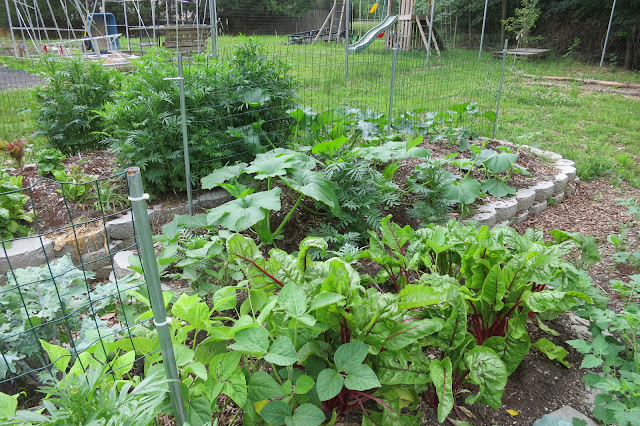 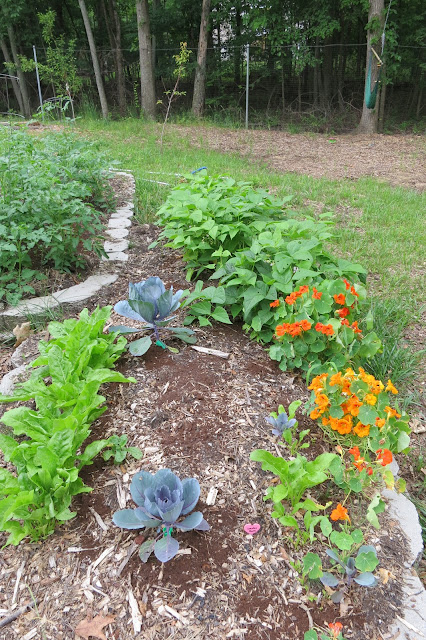 [From left to right, by bed: tomatoes, sugar beets, a couple of cabbage, green beans, nasturtiums] 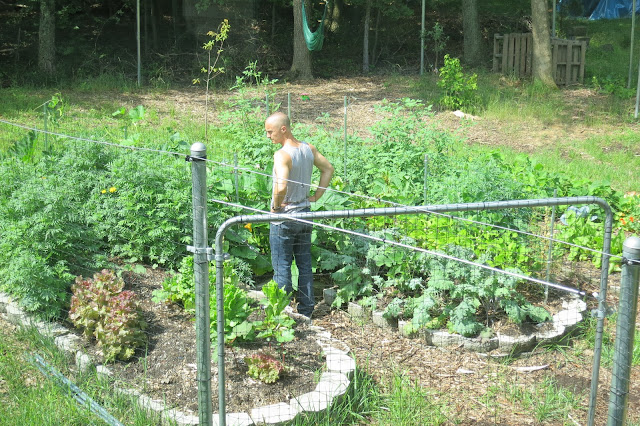 The kids seem to like the garden too. Josie helped me plant quite a few seeds and label the rows (although Audra promptly removed all of the markers), and they both help harvest: Josie can pull off the beans at least, and Audra pulls off all the leaves ;) There is something gratifying about growing our own food though, seeing the progress from planting seeds to being able to eat it, straight from the garden. We've even found that the kids are more likely to eat certain vegetables if they're fresh (even better if the kids are able to pluck them straight from the plant themselves), and one evening we positively gorged ourselves on fresh green beans. 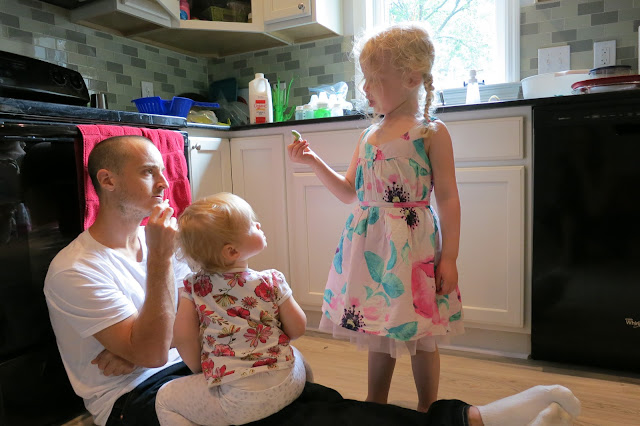 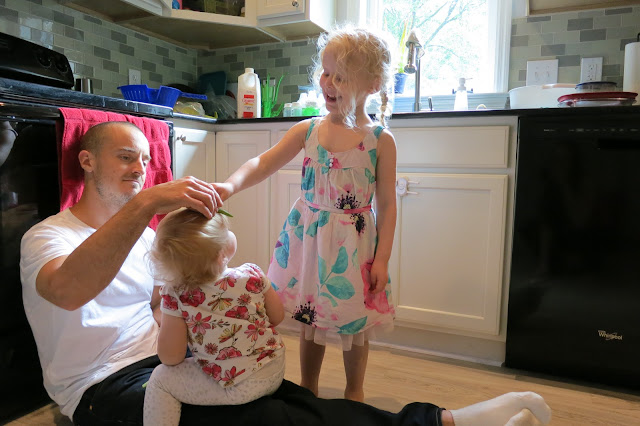 We also finally decided to do something about the collapsed greenhouse, and we had the guy who helped finish our basement come out to dismantle the first greenhouse and start building a new one. Hopefully this one will stay up for longer than a couple of months ;) 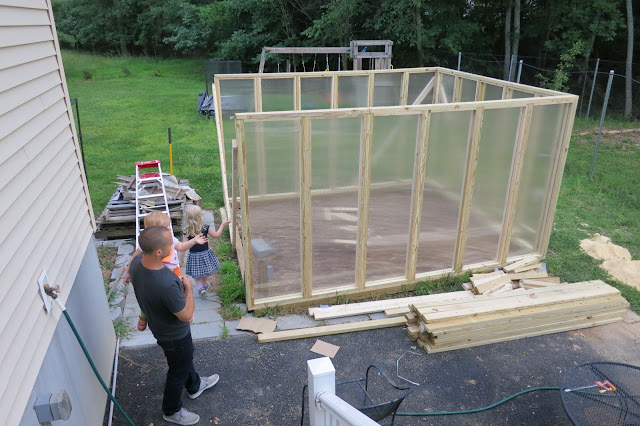 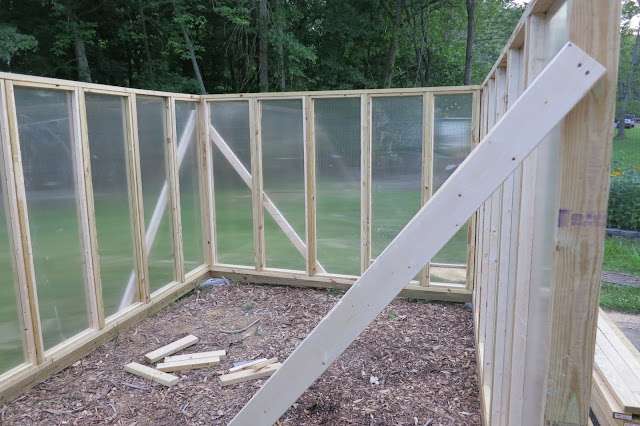 Oh, and I finally got my hair cut, for the first time since Audra was born. I think this was a new record for me - it had been 16 months since my last cut ;) 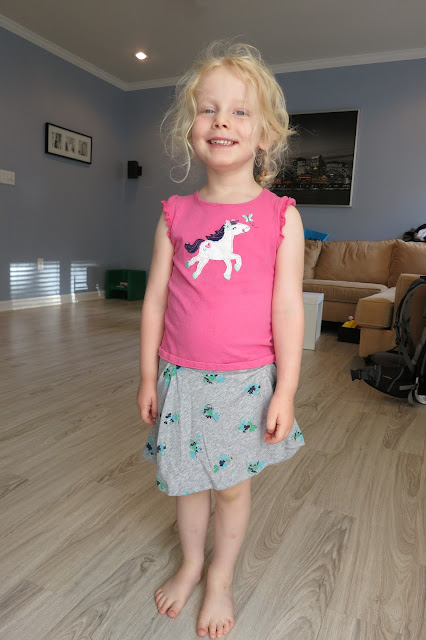 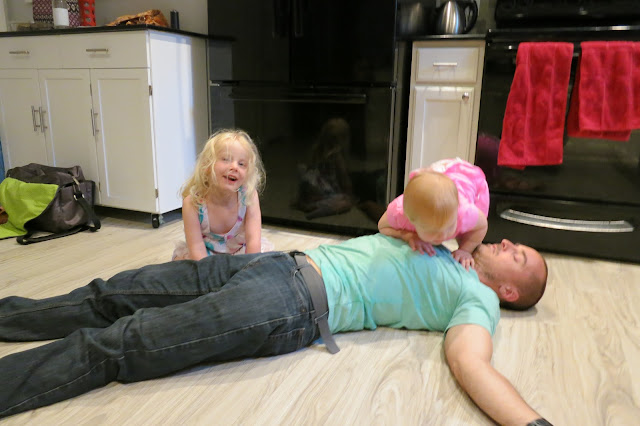 [Ryan's down for the count] 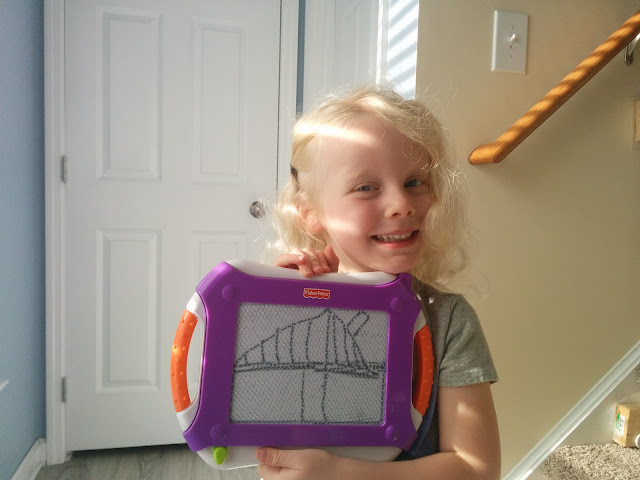 [The picture of a house Josie drew for her cousin Benjamin] 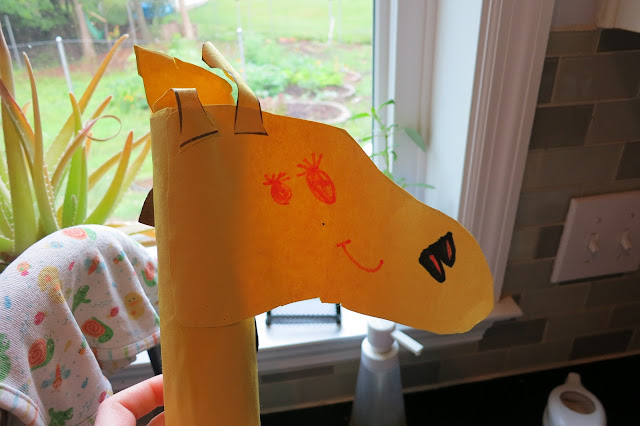