At long last (and not without some struggle), I have hereby fulfilled my commitment to myself to document the first two years of Audra's life. It wasn't timely, but it got done eventually ;) Although, this is not the complete recap of Audra's 24th month, since Audra's developmental updates and birthday just weren't going to fit in the same post as our trip to Florida - so Florida is coming separately. And then I'll be trying to figure out a different strategy for this blog, since the massive monthly posts aren't quite working for my schedule at the moment....

Anyway, so Audra is two now! Two whole years. This was the milestone I had looked forward to of when I thought we would be sufficiently out of the "survival mode" of the little baby years so that things might get a little stressful/overwhelming, and that has pretty much been the case. Audra is still massively challenging in some aspects (mainly screaming and now out of control tantrums, wheee), but she is my everything: she is such a source of exasperation, yes, but also the source of so much joy for me. Looking at her face as she's peacefully sleeping grounds me when I get stressed about work or life in general, as I think "this is all that matters". And it is.

We celebrated Audra's birthday by having a celebration at her daycare, and Ryan and I met there to sing Happy Birthday to her and eat too many of the Rice Krispie treats I had made. Audra has been singing Happy Birthday a lot lately, and she seemed so thrilled to have it finally be her turn to be sung to. 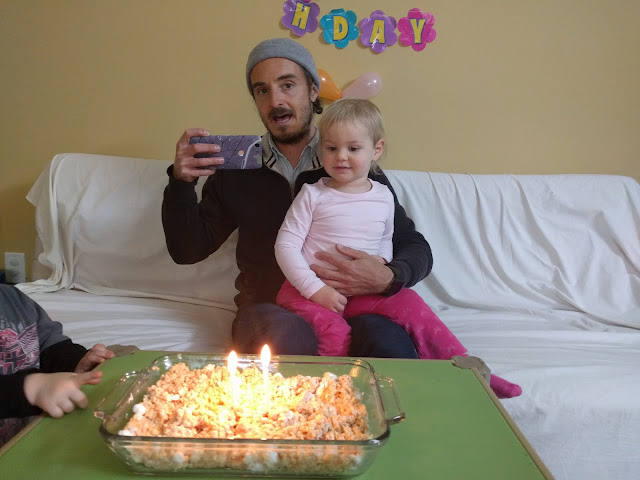 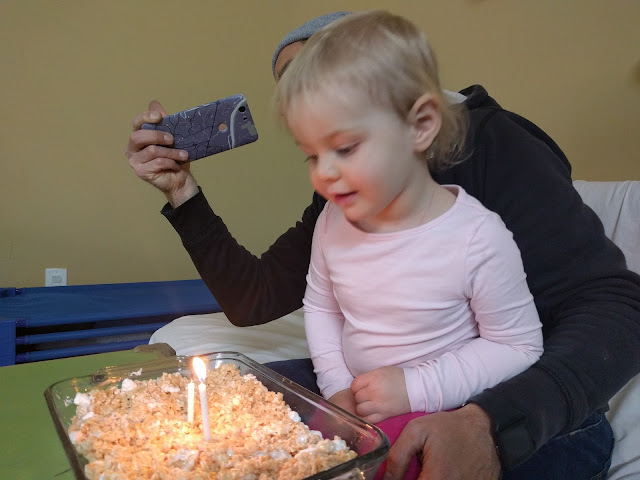 On her birthday proper, we did presents in the morning, where Josie helpfully supervised (slash micromanaged) Audra's prompt opening of her presents. I will probably regret getting an Audra an umbrella of her own, but until then, I'll enjoy how excited she is about it :) We also went out for her favorite meal for dinner: miso soup from the sushi restaurant. So she had bowl after bowl of soup, in between handfuls of edamame. 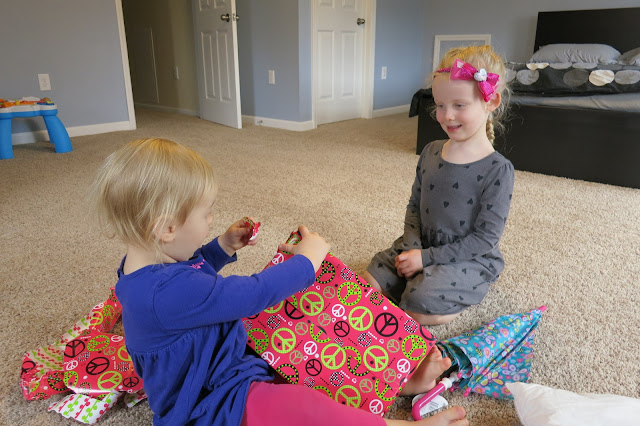 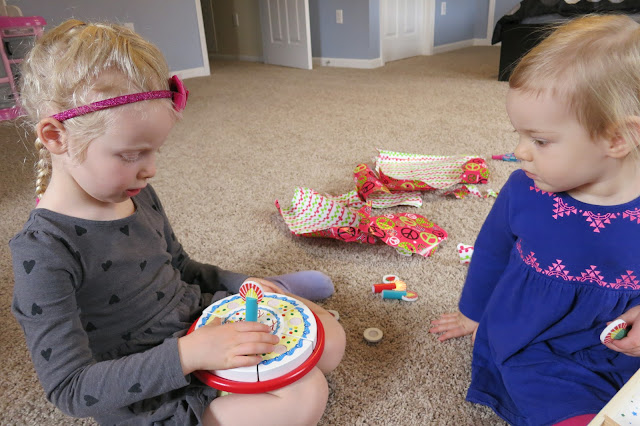 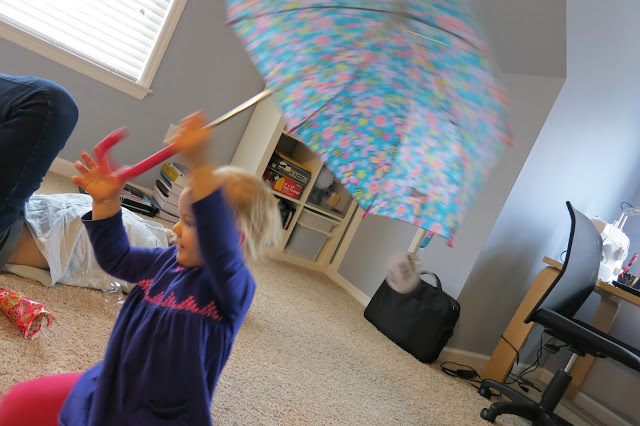 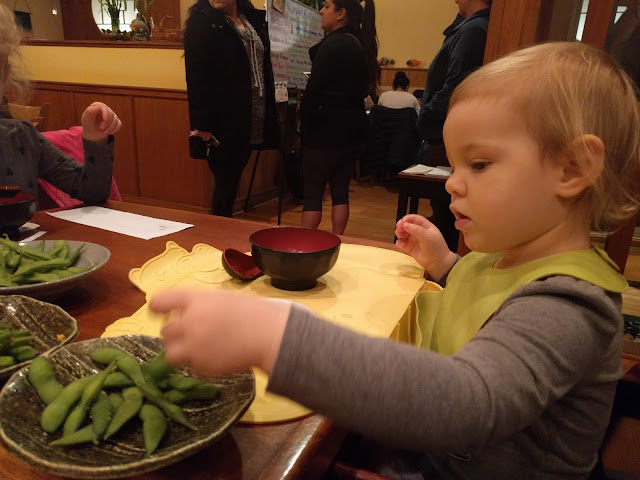 Then the next day, we had a party with family at our house. Audra takes a while to warm up when she first wakes up from her nap, especially so when people are over... and especially so when said people bring a larger-than-life-sized Tinker Bell balloon. Audra just did not know what to make of it, although she eventually decided that it actually was quite all right, and, in fact, was her new best friend. So we spent the next two weeks involving dear Tinker Bell in so much activities, like playing Ring Around the Rosie, holding her hand to bring her to different rooms, dancing with her, hugging her good-night, etc. 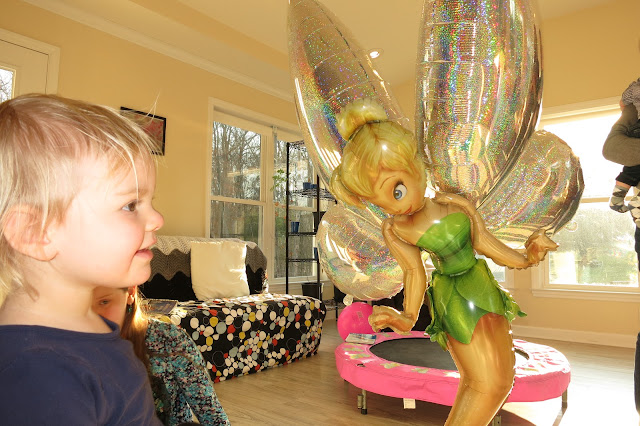 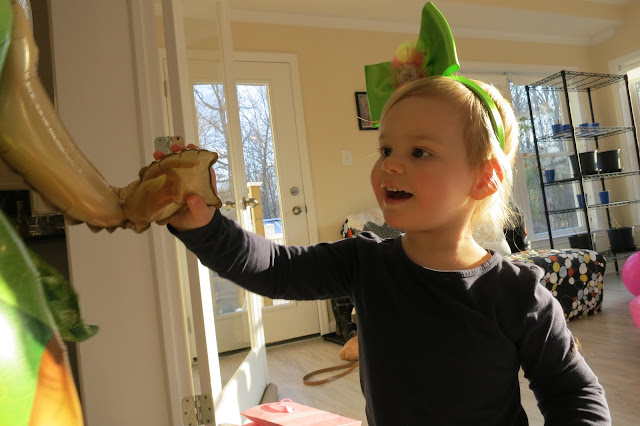 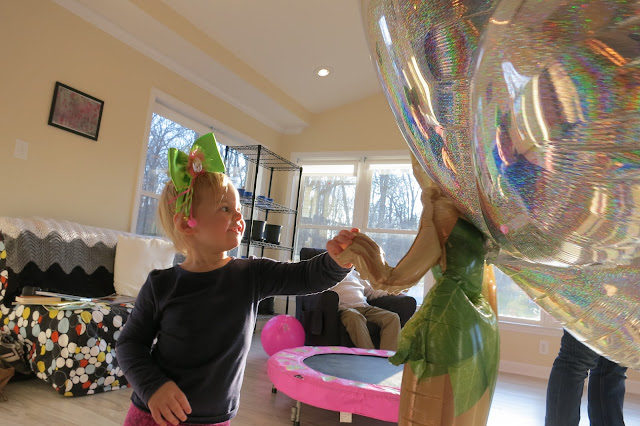 Besides that, Audra had a great time with family, presents, and all the other balloons we got her too :) She liked her new gardening tote bag (repurposed as a purse), I liked all the clothes she got since she has just about caught up to Josie's size, so she needs her own clothes instead of hand-me-downs, and she particularly liked her ice cream cake :) 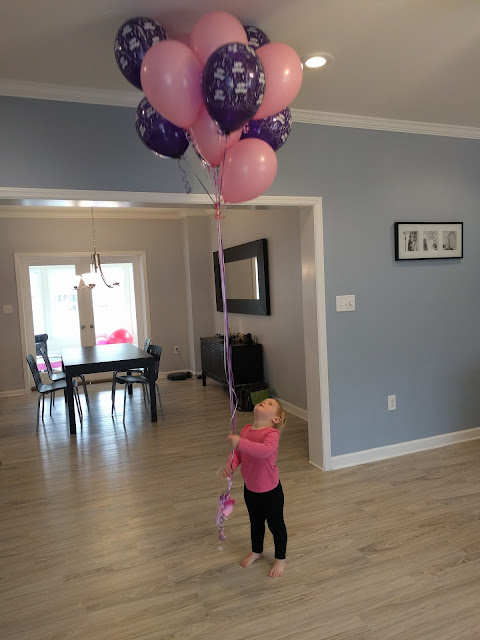 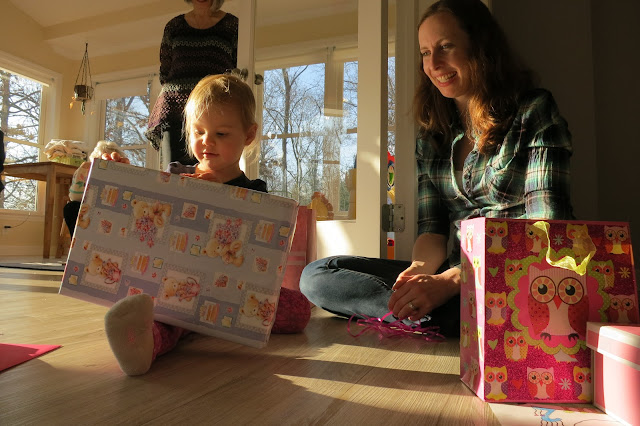 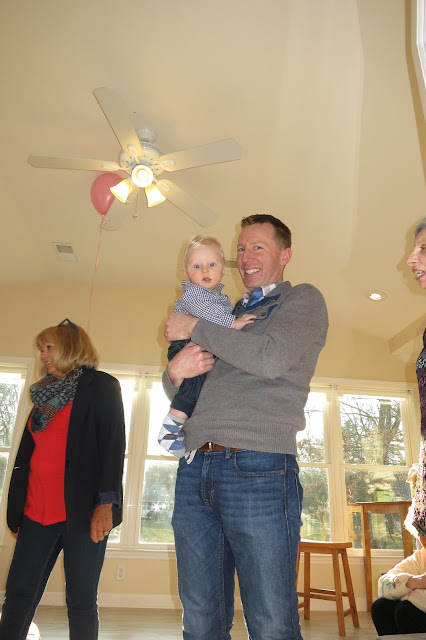 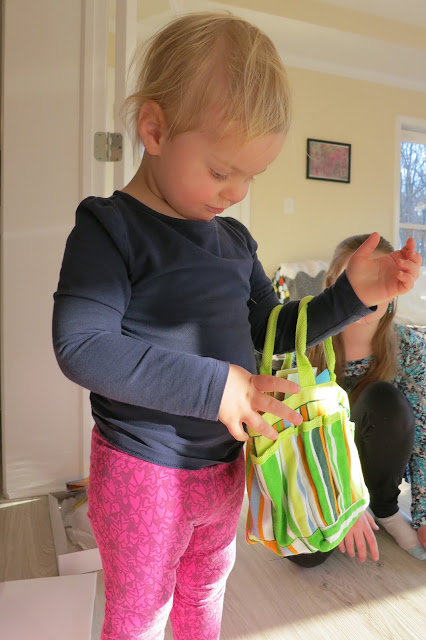 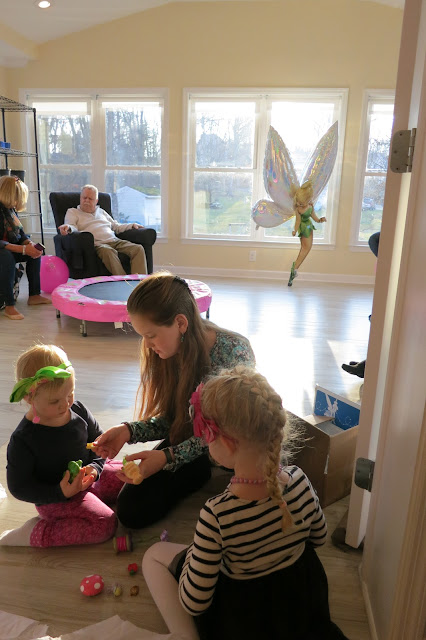 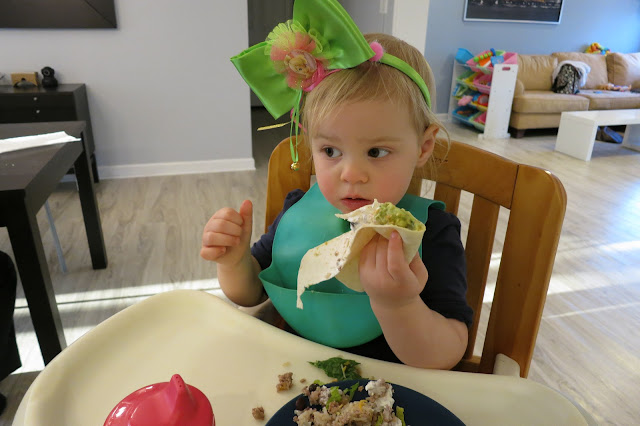 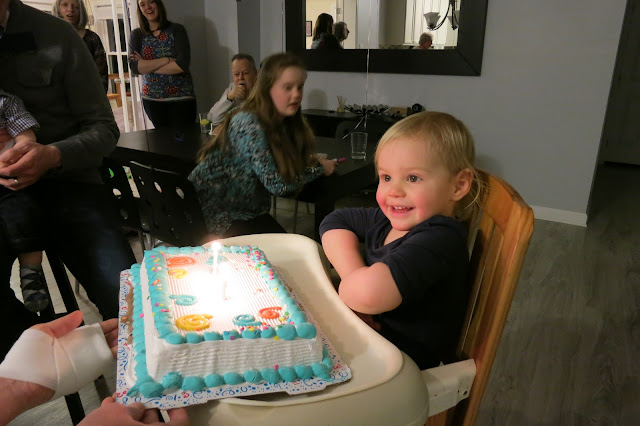 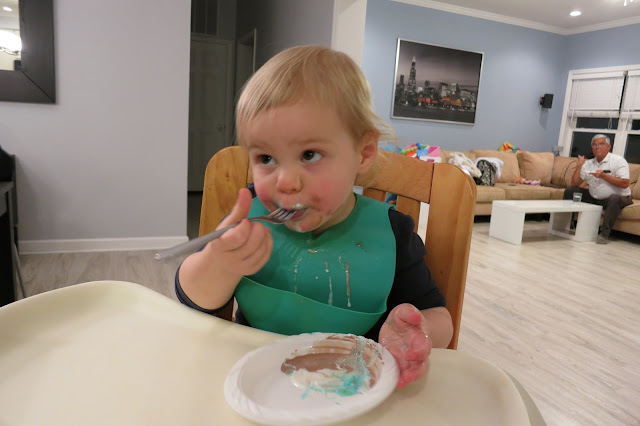 Audra just had so much talking to do - and the amazing thing was, she appeared to level up with her language skills in a single day, waking up from her nap one day talking in more complete sentences, asking questions, telling me things, etc. So she said "Happy birthday to you, Daddy" to Ryan, said "Where you, Daddy? Potty?" another time, and said her longest sentence yet: "Daddy built that skateboard ramp!" We even had a whole conversation:
A:"Uh-oh! Mommy phone!"
S: "No, it's ok, it's over there by the vitamin D."
A: "Ohhh."
S: "Thank you, though."
A: "Welcome!"

Audra likes to read after me - she'll pick out books for me to read to her, then grabs the book after I'm done, says "Audra read" and then she usually calls the book a phrase from the book and then repeats the same thing for each page. It's so cute. Like "Ten Little Ladybugs" is known as "One Two Wawwybug", which also appears to be what each and every page says too :)

More silly Audra-isms for the month:
While Audra had been sleeping through the night on occasion over the past 6 months, she had pretty much stopped for a few weeks... and just as I was reminiscing about those times so long ago when she slept through the night, she started doing it again :) She is also starting to fall asleep at home without needing to nurse to sleep, so instead I've had some success with asking her to lay down and then we hold hands until she falls asleep... very sweet :) She seems to be handling it better when she doesn't nap during the day too, and while I would prefer her to sleep at daycare, at least it means that she's not guaranteed to be a complete disaster in the evening. She may just fall asleep at random times. 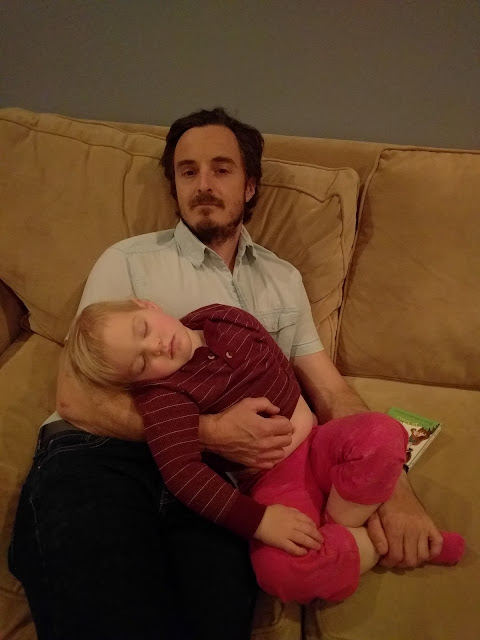 I'm also thinking our days of having a baby gate up are probably numbered. We had left the gate open a couple of times on accident, and given that Audra was able to safely navigate her way up and down the stairs.... once with a broom, once while transporting pool balls from the pool room upstairs to a bin in the living room... I think it's probably time to ditch the baby gate. 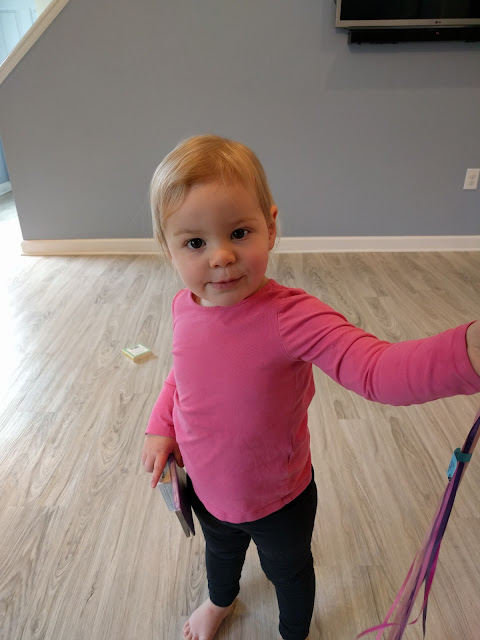 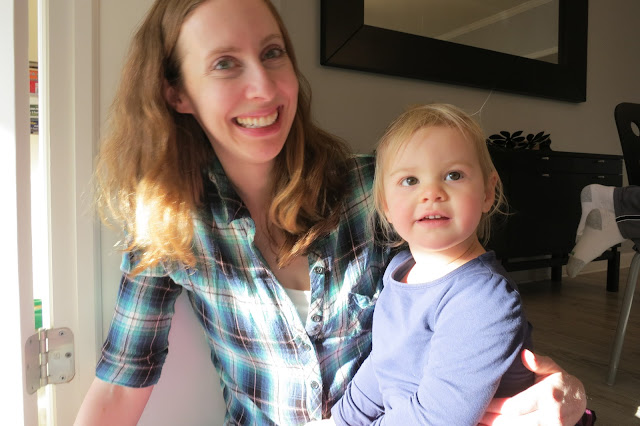 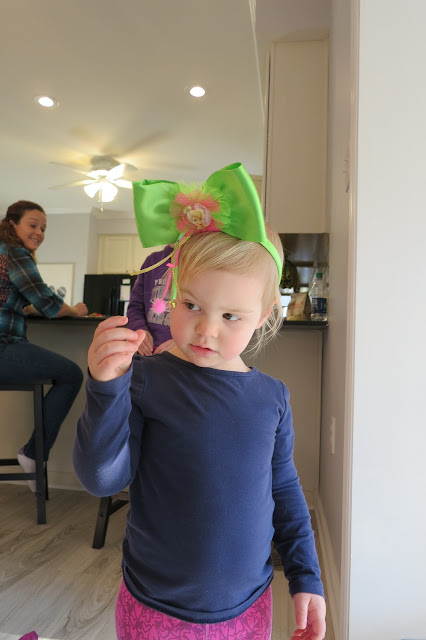 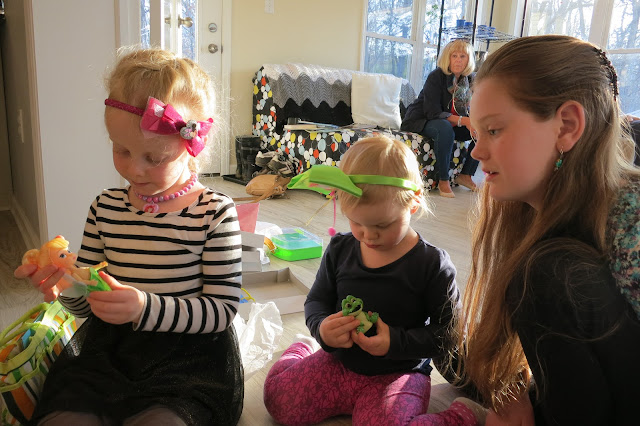 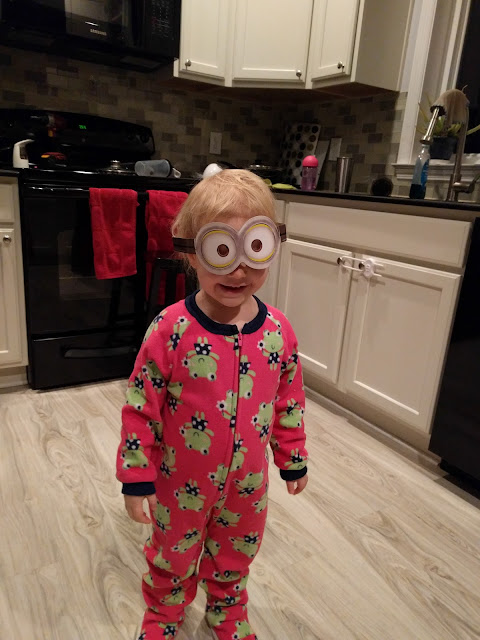 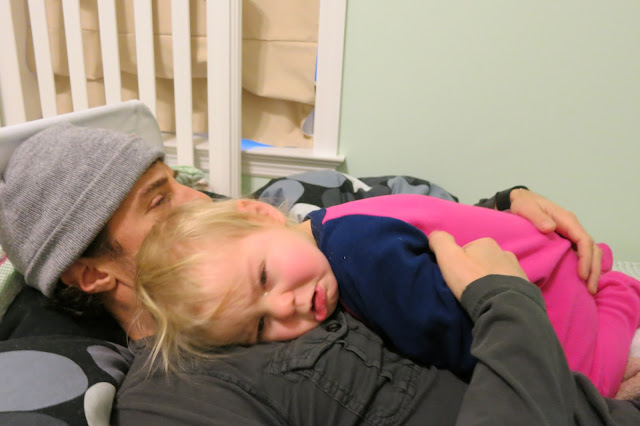 [Sometimes it's hard to be an Audra] 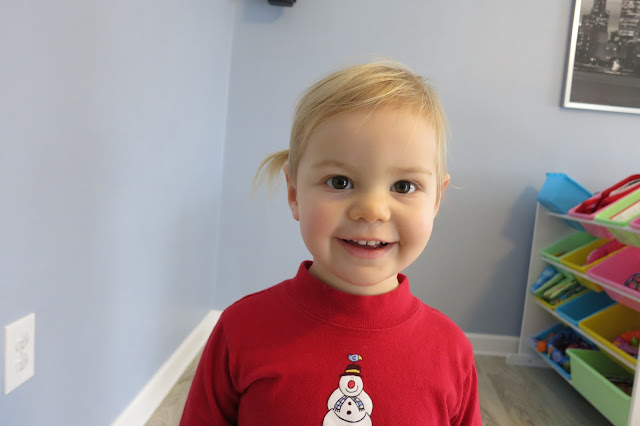 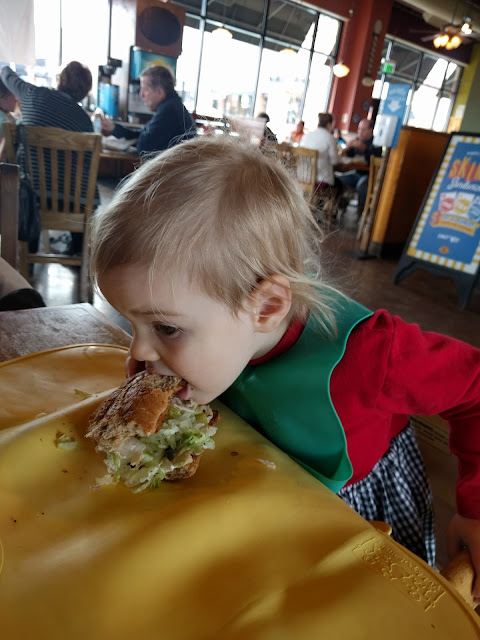 [A little unsure about how to eat her sub] 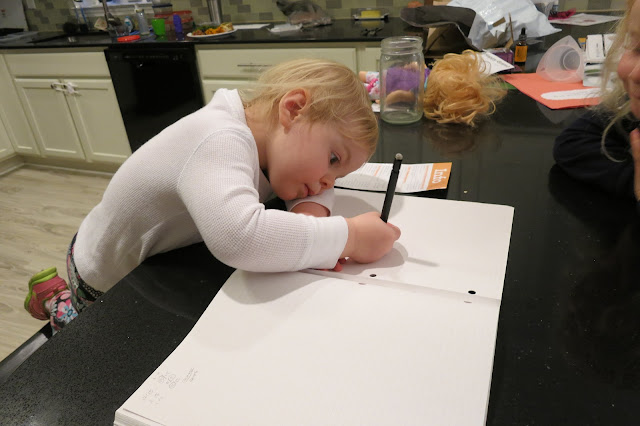 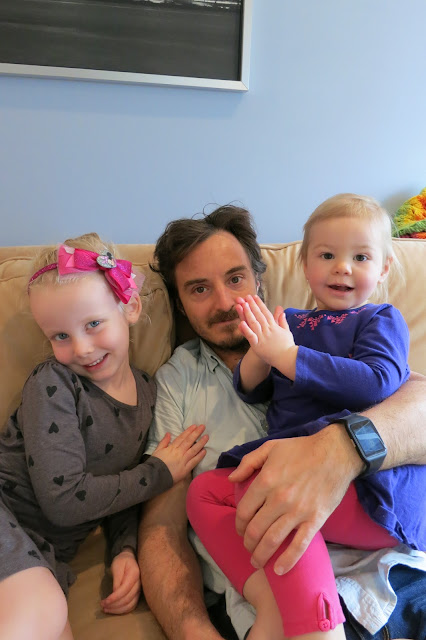 [Playing Ring Around the Rosie with her dear friends the monkeys]
at 8:46 PM