After reading "Charlotte's Web" (where a fair is quite significant to the plot), I thought Josie should perhaps experience a county fair in person... also, she really likes rides, and I had misread the website and thought we just paid a flat fee to get in and all the rides were included. That was not the case, so I'm feeling even more gouged than normal, but ah well. 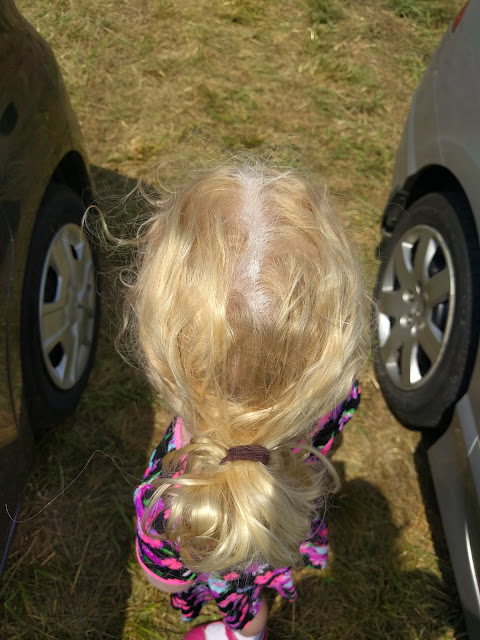 [Doing what I can to protect her scalp from the sun]

So we went to our county fair, which was supposed to be a whole family outing but then dwindled down to just Josie and me. Audra is going through an especially volatile time lately, and so we thought it might be better if she sat this one out (also, we had to abandon going out to lunch earlier that day because she was screaming so much just trying to get her in the car, so our appetite for screaming was already depleted by the time we were leaving for the fair).

Our first stop was the petting zoo, where Josie pet a tortoise, llama, camel, and bunny, but I was probably most excited about the cavies, since I've never seen one in person before. 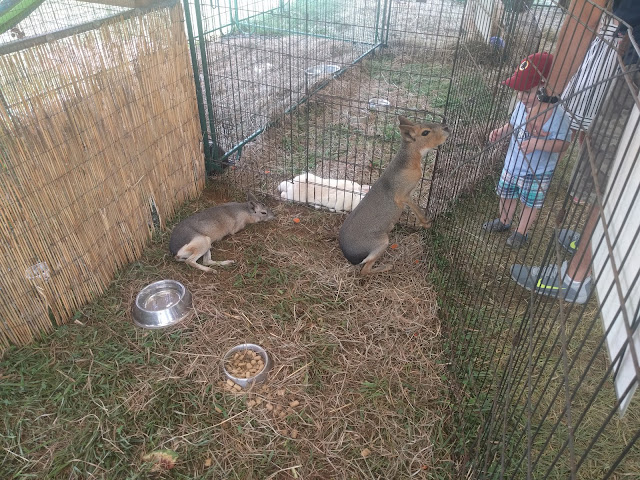 We then walked through the beef barn on our way to the midway, where Josie decided to cash in her one allotted sweet early, and she chose ($4 each) sno-cones. It was still pretty hot out at that point -- and the sno-cones so refreshing and cool -- that I complimented Josie enough on her selection that she hazarded an attempt at a second sweet when she asked if we could each get another sno-cone. Nice try, kid.

It was starting to cloud over (with thunderstorms in the forecast), so we couldn't go up in the Ferris wheel, which is what Josie had been most excited about. She rode a little ladybug ride instead, though, which she claimed was her favorite for the day, so it all worked out anyway. 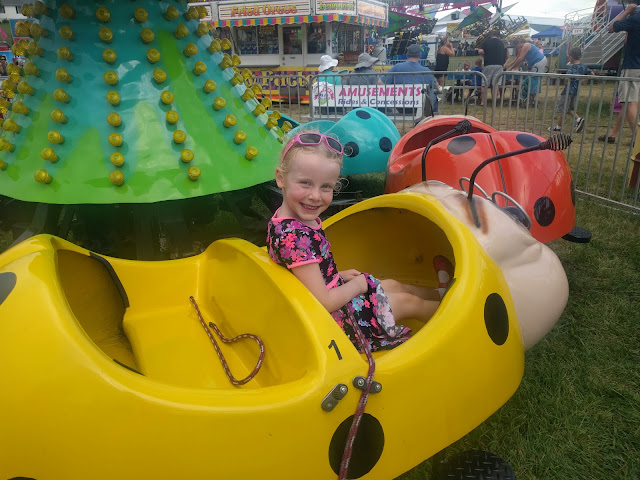 Next up was a fun house, then... bumper cars. This is what I think was actually her favorite, given the squeals of delight that were coming from next to me each time we hit another car. Then she went through another fun house, and that was the end of our tickets. Amazing how quickly they go!

I was still on the search for horses, so we then continued our way through the fairgrounds, including going through the pig barn. Josie was fascinated by all the pigs, even though she thought they were all dirty since they had some shavings on them. Meanwhile, I don't think I had ever seen such clean pigs in my life. We found a faintly glowing pink one that reminded us of Wilbur (after he had been scrubbed clean in a buttermilk bath), so that was exciting.

We finally found the "horse barn", which was really just eight stalls with what I'm guessing were just representative horses. There wasn't a big enough ring for a horse show at the fairgrounds, so I imagine that was (or will be) done elsewhere. But we took a peek at all the horses, and then I fell in love with one of the yearlings that were there, and I fawned over it and rhapsodized to Josie about how horses are the best smell in the world (as she looked rather doubtful about that opinion). 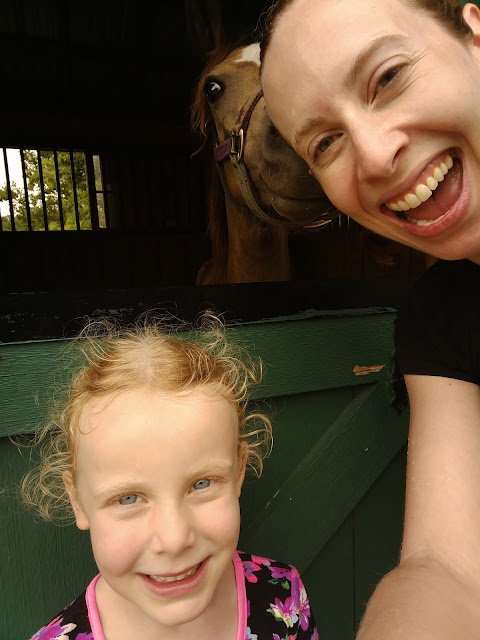 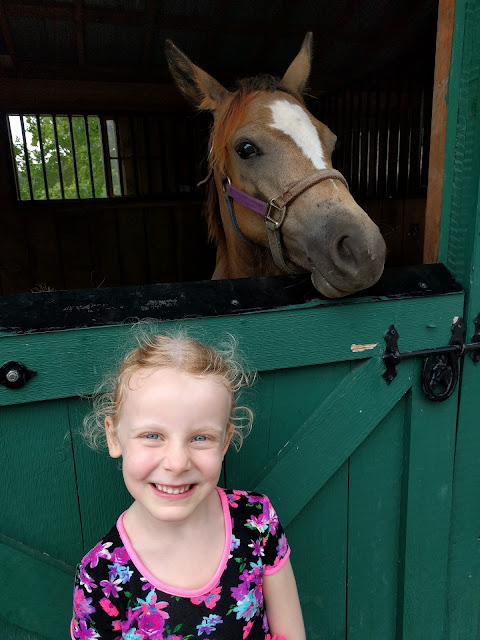 It had started to rain by that time, so we started heading back to the car, except I thought we should probably take a detour to a port-a-potty just to be on the safe side before we got back on the road. So Josie had her first experience in a port-a-potty, and while I won't get into the details of that, it was also notable that it starting pouring while we were in there. So then I had the fun experience of trying to decide if it would be worse waiting out the worst of the storm while stuck in a port-a-potty, or going for a (long) run back to the car in a downpour. Luckily, I was doing this thinking out loud, and Josie piped up that she wanted to make a run for it, so we did. We ran most of the way back to the parking lot, with both of us laughing and shrieking as we jumped over the puddles. We then caught a ride in a (mostly) covered wagon through the parking lot, so we were only mildly drenched by time we got back to the car. All in all (except for the price gouging), we had a great time at the fair, and Josie has already put in her request to go back next year :)
at 9:42 AM

Email ThisBlogThis!Share to TwitterShare to FacebookShare to Pinterest
Labels: Josie