Josie is now one year old! This was (obviously) a big week for us: her first July Fourth, a visit to my work on Friday, then her first birthday (including party) on Sunday.

So first up, the party we normally go to each July Fourth was canceled (due to the crazy storms we had over the weekend, which knocked out power to a lot of people, including our friends whose home we would have been going to), so instead we had a low-key day at home and then had dinner at Ryan's parents' house. We took Josie on a walk, which, I have to say, she seems to have lost some enthusiasm for. She used to either fall asleep or stare contentedly at everything passing by, but now, she looks like this for the most part: At least, until she sees one of us. Then she goes right back to being thrilled with life and overcome with glee: Also on July Fourth, I was finally successful in wrangling the child so I could put her hair in a ponytail. She has steadfastly refused to cooperate with any hair-stylings lately (and all barrettes are promptly removed by Miss Josie), so her hair has been quite messy and in her eyes (enough that Ryan even referred to her as a "ragamuffin"). Josie also celebrated the Fourth by taking a nap in her crib for the first time in... I don't even know how long. Many months, probably. As seen above, I do still like to take semi-creepy screen captures off of the baby monitor/webcam. It's hard not to, though, when Josie sleeps in such adorable positions :) Since Ryan had Thursday and Friday off work as well, he brought Josie in to my work on Friday for her first visit since she was six weeks old. Josie has been going through a phase again lately where she's crying more when I walk away from her or if someone else holds her, and has also been more shy with new people. So she was hiding against us at first at my work, and then eventually warmed up (probably because she had new people to walk her around), and then she was back to her normal of yelling and being generally adorable as she was walking and scooting around.

Josie's watermelon replacement/ball mentioned in last week's post has still been a big hit. She figured out how to play catch, so she now pounces on it as soon as I roll it to her, and then throws/bounces it back to me (at least, as long as I'm directly in front of her!). She'll play with it herself too, although that seems to mainly consist of her hugging and eating (or maybe kissing?) it.

Josie's mood has been a bit erratic the last few days. Some days she's been especially giggly, where all we have to do is look at her funny to set her off into peals of hysterical laughter, and other days she's been a bit more... morose, let's say. We're pretty sure she's getting ready to cut at least two more teeth soon (in addition to her top middle teeth, which are still coming through), so that may be part of it too, but her sleeping has been all over the place lately. She is finally napping better on her own (usually decent 2-hour naps now, although it appears she has already dropped her afternoon nap), but has been more difficult to get down at night and has been restless and waking up more overnight too. So hopefully things will settle back down soon once she cuts her next batch of teeth and makes the other big developmental leaps that she's working on now, since she's starting to at least consider standing and walking on her own now. She has pulled herself to standing using the stairs and various pieces of furniture, and then a couple of times has danced back and forth and lifted one hand up at a time (but didn't actually stand all the way up on her own), or taken a few steps on her own. She will also scoot to me now when I tell her to come to me and wiggle my fingers at her - she usually ends up stopping and yelling for me to come get her when she's about halfway to me, but I can't help the fact that she chose such an inefficient method of moving around ;)


Finally, we had a party for Josie's birthday on Sunday. We don't usually throw too many parties (I think this is the third one in the ten years we've been together?), and I'm remembering why as we're still trying to recover from all the work that went into it ;) The party went really well and it was a lot of fun, but we (especially Ryan) had put so much time and effort into preparing for it that I feel like I need to sleep for a week to make up for it now. Josie's naps got a little messed up before the party (she woke up after 45 minutes, but I was luckily able to get her back to sleep for another hour, but I think she still had more sleep in her when she woke the next time), so she was pretty out of it for the first hour of the party. She started perking up as more people/kids started showing up though, and ended up quite happy... until it was cake time. Ryan had made a cake for her that was designed for maximum messiness, and our normally no-holds-barred little eater rather primly ate the berries off the top and then tried to call it a day. Oh well :) 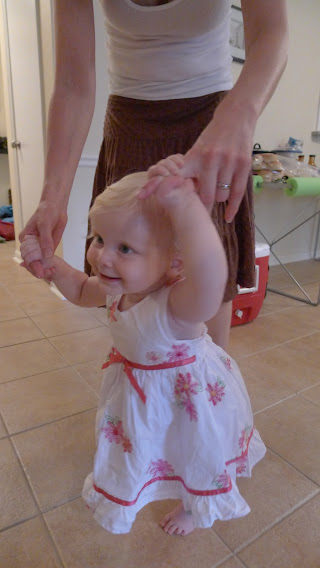 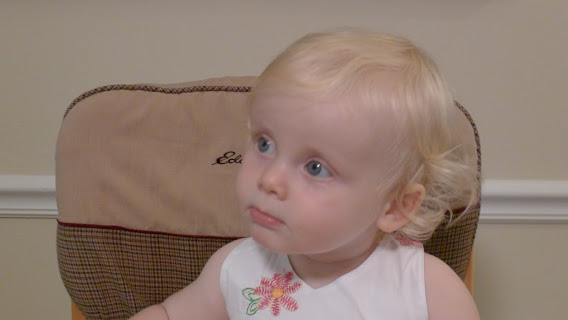 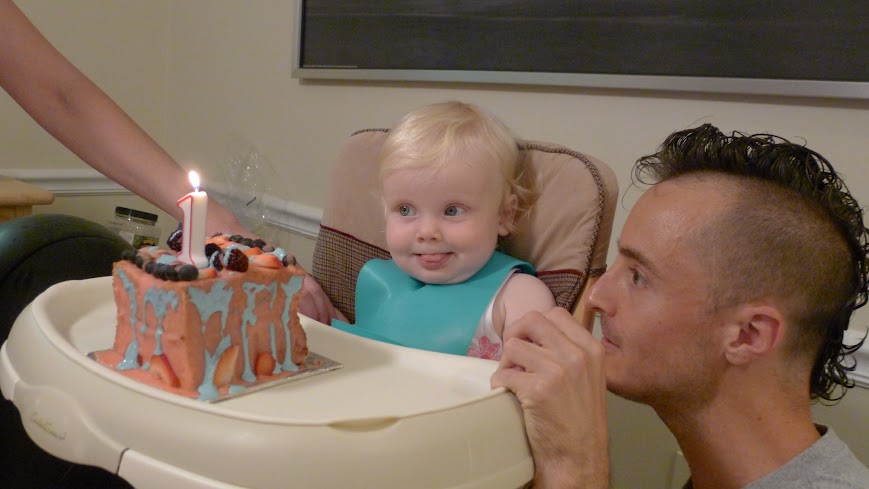 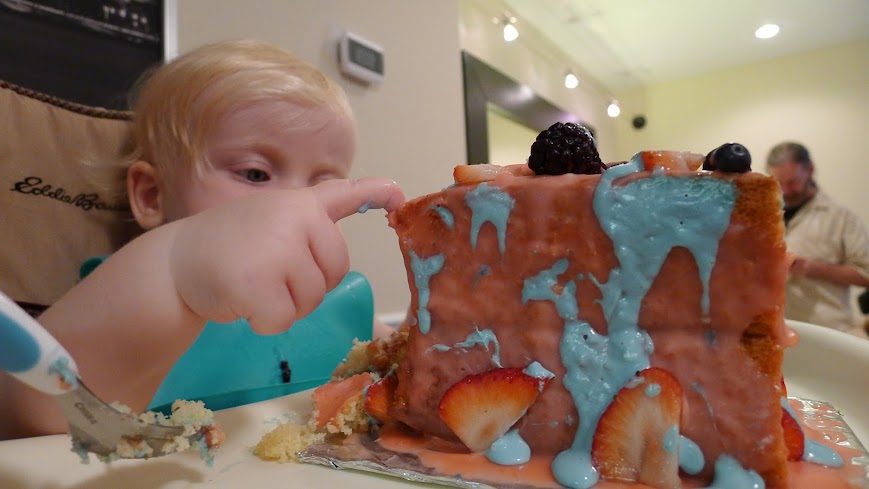 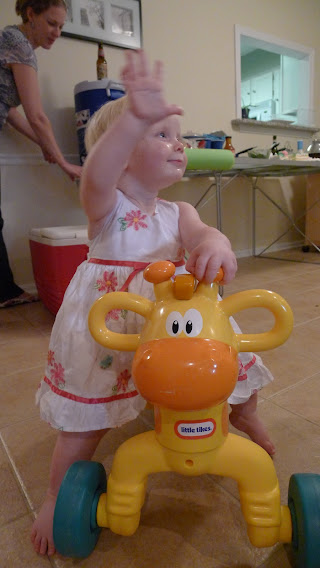 [Ready for a high five] 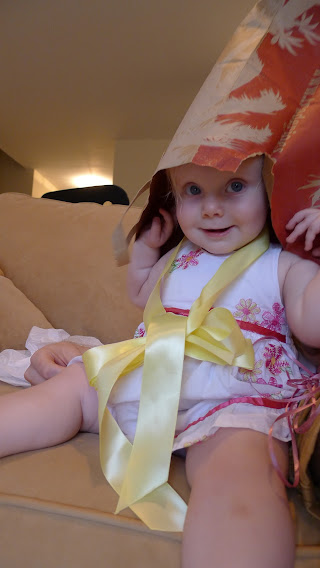 Coincidentally enough, as I was feeding Josie during the party, I happened to look at the clock and noted it was 3:48pm and Josie would have been a half hour old a year ago... and then realized that it was thunderstorming out, just as it had been a year ago too. Neat :) [Smiling with her eyes (or "smizing", for any ANTM-watchers ;)] [Josie has been pretending to talk on whatever's handy - blocks, keys, etc. - so we finally gave her an actual phone to play with instead]

And now I will be taking a (short) break from the blog. I met my goal of doing weekly updates through her first birthday, so I will probably be doing some review and editing next to figure out how to print out the last year of posts for Josie's baby book. We'll be on vacation next week, so I should be back with more pictures in a couple of weeks :)
at 4:50 AM