In May, Josie continued to do well with not sucking her thumb, and after several days of not sucking her thumb at all (even for naps), she finally got her reward - her very own Legos, that Audra is not at all allowed to touch (particularly because some of the pieces are tiny, and Audra still likes to try to eat things she shouldn't). She does seem to be having night terrors, though, as she yells out rather frequently overnight (and once when she fell out of her bed too).

We went to my sister-in-law's baby shower at the beginning of May, and Josie helped me prepare for it by putting together the bags for the prizes. She did quite well for the shower itself too, sleeping through the trip there (which took an extra ~45 minutes as my GPS wasn't working properly on my phone, so we basically went in concentric circles trying desperately to locate the house each time my phone found a signal for 2 seconds), then kept herself busy playing and eating while we were there. She even won one of the prizes for Bingo, so we got to take home some of the Speculoos I had bought on a whim (which was a bit random - maybe I shouldn't be in charge of prizes!). 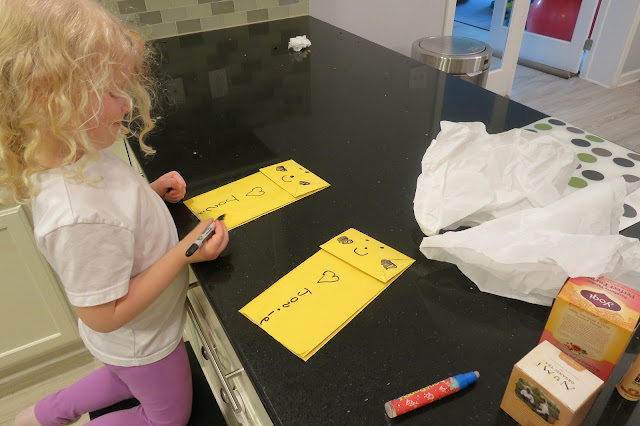 [Decorating the extra prize bags]
Also notable was the tomato Josie ate for lunch at the shower, since it exploded over the both of us as soon as she bit into it. We were both a bit speechless at first, as we were like, uhhhh. We're both covered in bits of tomato now. Josie also talked -- daily -- about the candy she got as a party favor, so that clearly made an impression ;) But the baby shower was fun, as we celebrated the soon-to-occur birth of Emily and Brian's baby. Spoiler: they had a beautiful baby boy on June 16th :)

Josie has been challenging us a bit more lately, sometimes refusing to help clean up in the evenings, even though she knows that means no books before bed (which always leads to hysterical crying). Perhaps on a related note, she also seems to be standing up for herself more at school. She was holding her own playing Legos with the boys when I picked her up one day from school, with one saying he was breaking her Legos and her calmly replying, "No, I am." This is one of the hardest parts of this age for me so far, with trying not to intervene every time a kid is not 100% nice to Josie, and since she tends to react overly strongly (usually yelling and crying rather quickly), I worry about her being able to effectively stand up for herself. So I was quite proud to see her calmly handle the boys :)

Her school also had an event at the end of May, which we all went to. Despite Josie taking ballet classes for months now, she rarely shows us anything she's learning at home, so this was our first time actually seeing her dance. It was very cute, and so touching to see just how hard she was trying to follow her teacher's instructions. And I personally think her "ballet walk" was the cutest thing ever (even though it does not at all resemble what YouTube tells me it should look like!). 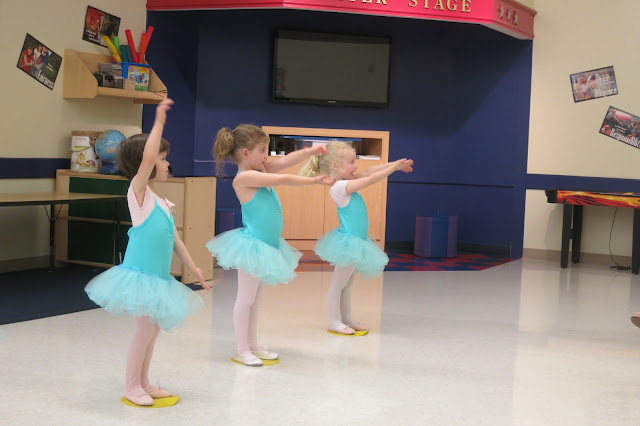 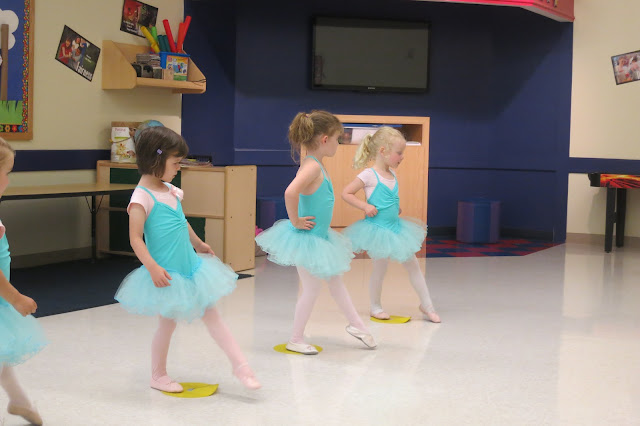 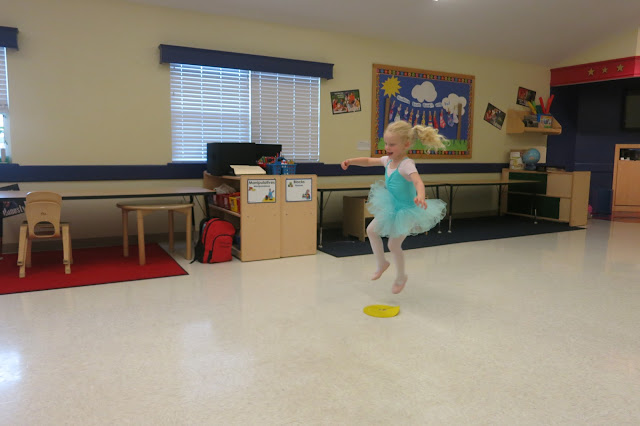 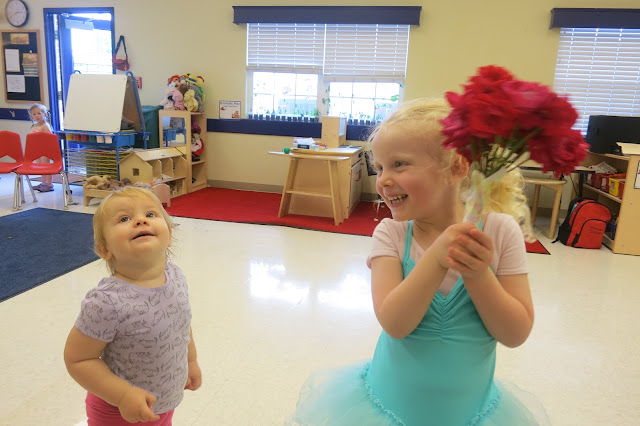 [With Audra calling in the background for her big sister ;)]

And after Josie danced, she and Audra went out and played on the splash pad for a while, then Josie got her face painted like a bunny rabbit (almost entirely because she wanted a carrot painted on her finger), and finished up with Josie going on a little ferris wheel. 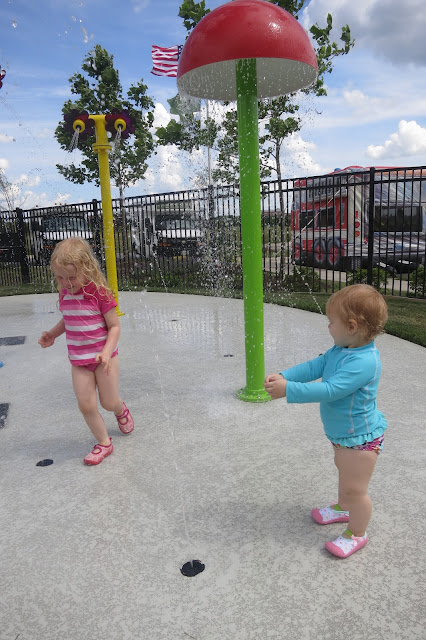 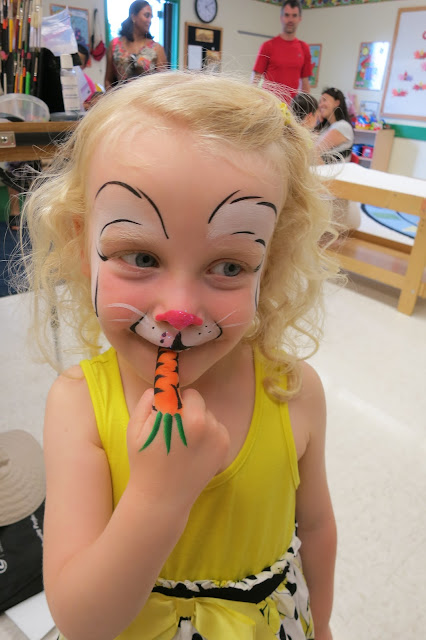 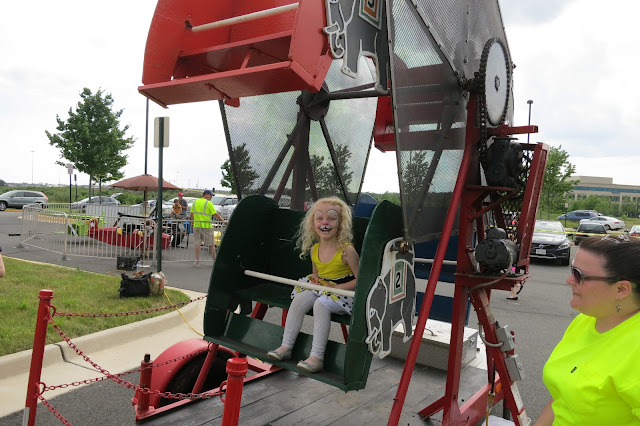 Josie and Audra do play well together, especially now as Audra is able to understand more, even though Audra keeps hitting her (most of the times unprovoked). Josie had a playdate with her (current) best friend at school, where they played together exceptionally well for a couple of hours. They hung out in her room most of the time, giggling, singing, climbing under Josie's bed... it was all very cute :)

The way Josie draws people now is drastically different from what it used to be - instead of a round happy face with feet coming out of it, her people now have hair, bodies with arms and legs (with some width to them, so not always just stick figures), and the faces have more features - but they are still mostly happy though :) 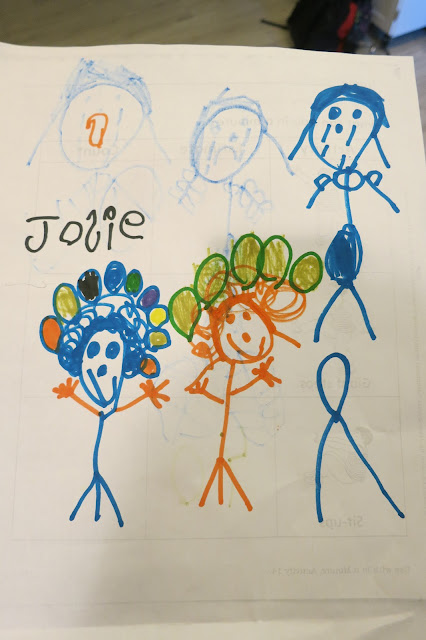 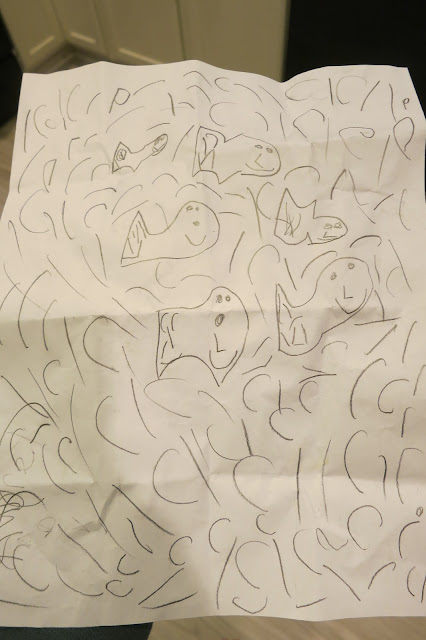 [A very busy picture of some very happy fish] 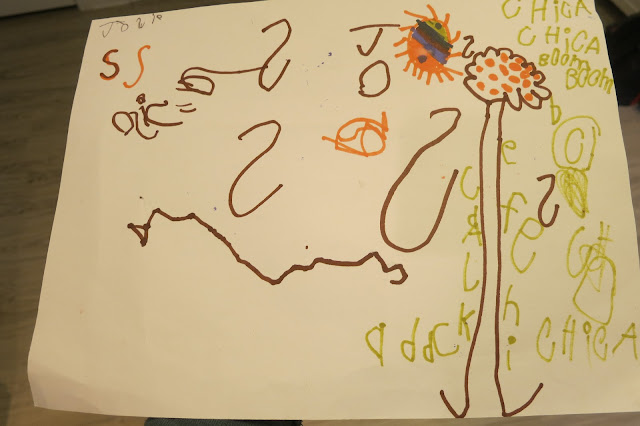 We also went through a few days of Josie asking me to bring various toys of hers to work, so I have a series of pictures on my phone that I take as proof that the designated toy did in fact make the trek to work with me :) 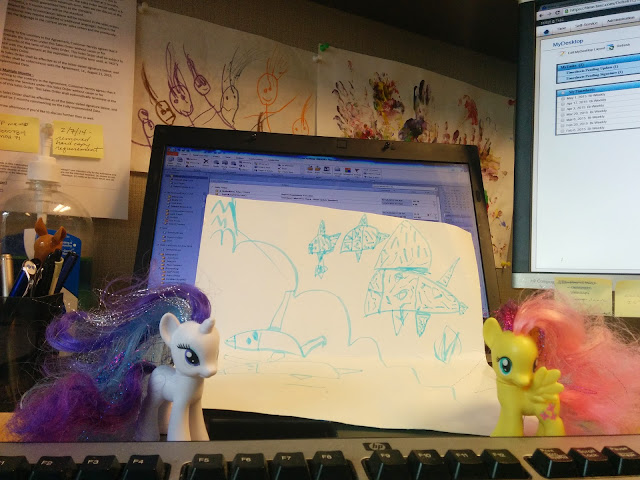 [With the shark picture she drew for me] 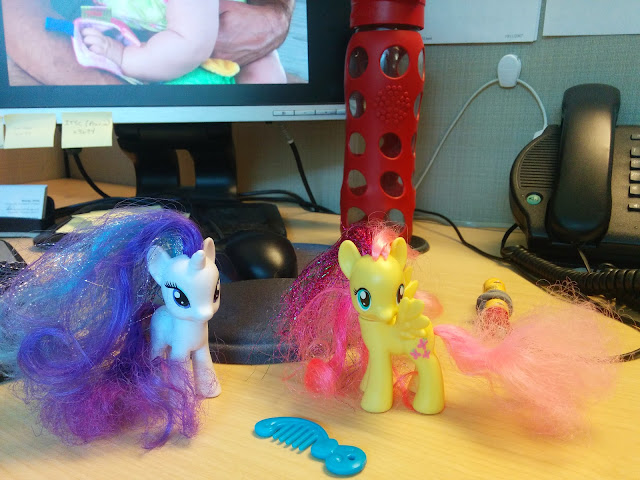 [Another day, this time with a comb]

Josie also played with oil pastels for the first time (which I maybe had more fun with than she did), and she helped me finish the Mother's Day cards we made for my mom and Ryan's. We all went out for brunch on Mother's Day, which Josie just loved, especially because she got to try cheesecake for the first time. 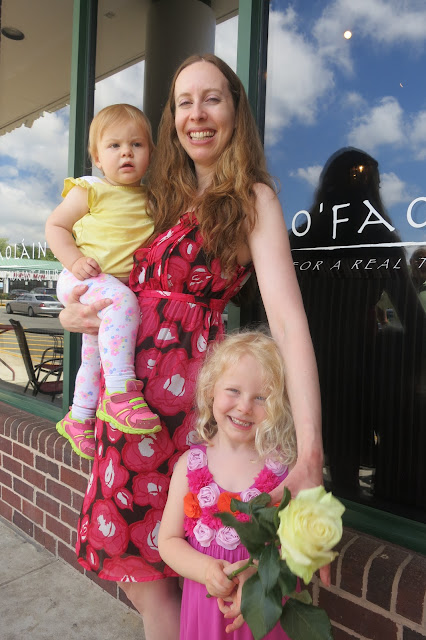 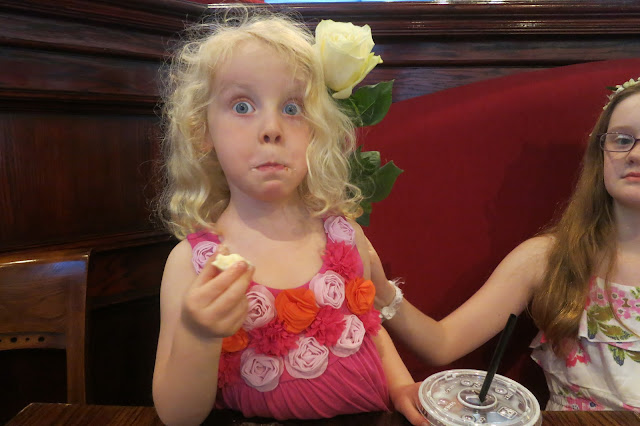 Josie is such a good helper (or at least tries to be, most of the time), and seems to really just want to be involved. She helped water plants outside with Ryan, then apparently decided to spray herself in the face with the hose. Let's just say that I could hear her reaction from inside the house, as she immediately started shrieking and crying because of how cold it was. Although it had already transformed into being a funny story to tell by time she came back inside and told me what happened ;) But while we were really just hoping to get the perpetual plants in the ground for them to start growing this year (the cane berries, fruit trees, and asparagus), with anything else considered a bonus on top of that, our actions did not align with these more modest goals. So we fully planted out all four raised beds, and were super excited to eat our first salads made entirely from produce from our own garden :) 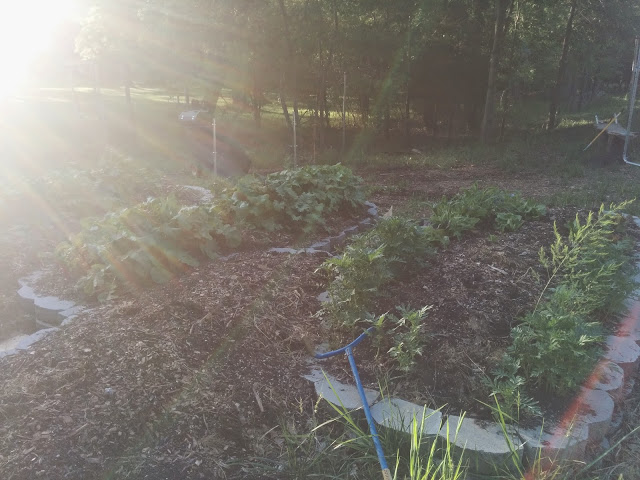 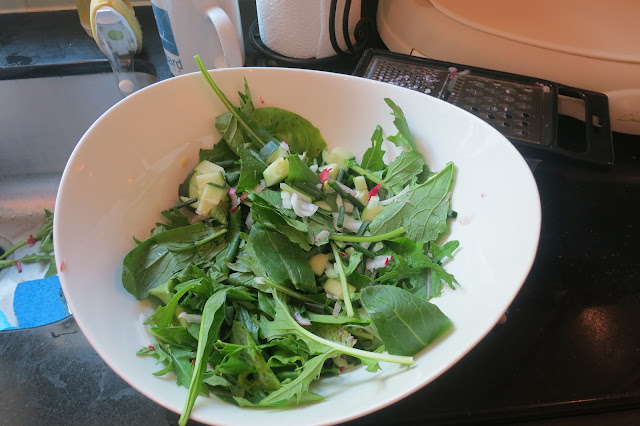 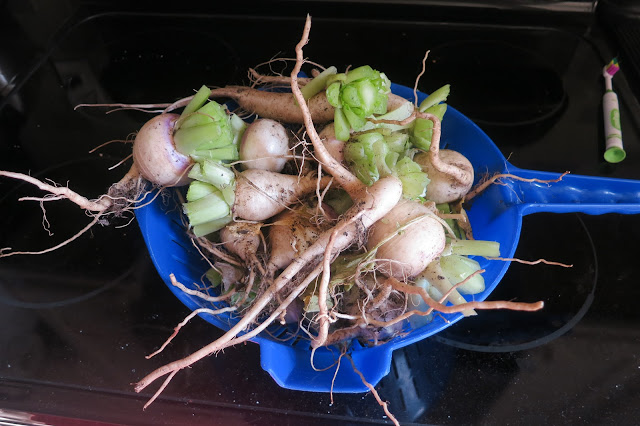 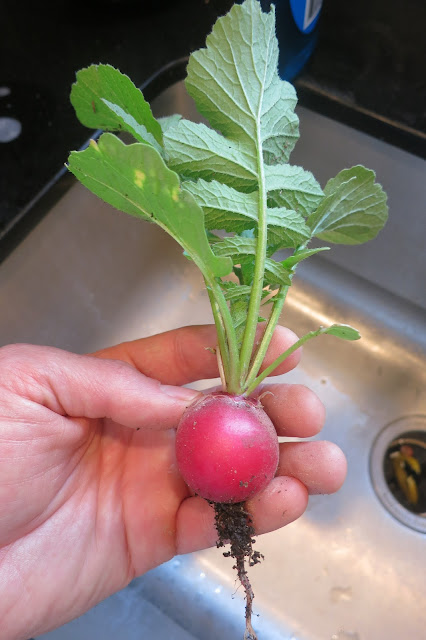 We also crossed off one of my goals for the year, which was to go on a family hike. We apparently just happen to live a few walking minutes away from a good trail, so we all headed out one morning and it quickly reminded me how nice it is to get out in nature for a while. The girls both liked it, and hopefully we'll be able to do this more frequently. Josie was quite impressed with the little hills we got to climb ("mountains" to her), so we told her about actual mountains that we'll climb with her, just as soon as she and Audra are a little bit bigger :) 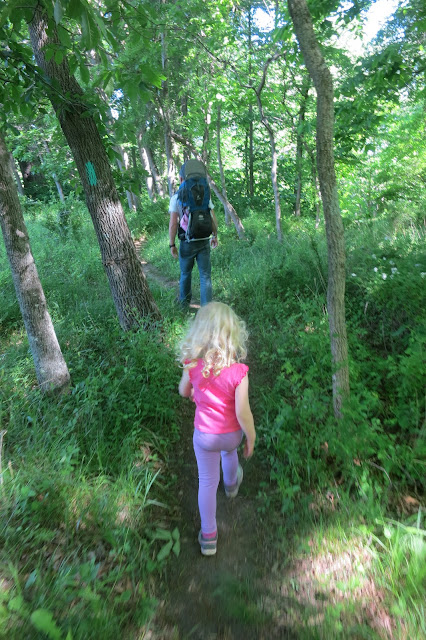 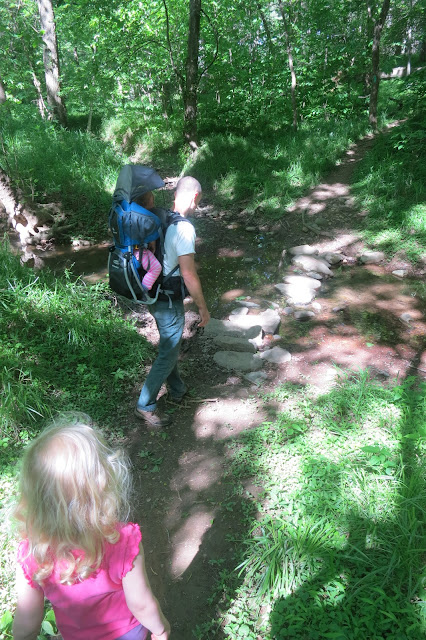 And apparently somewhere along the way, Josie memorized a whole book, and can recite "What the Ladybird Heard" at rapid speed ;) 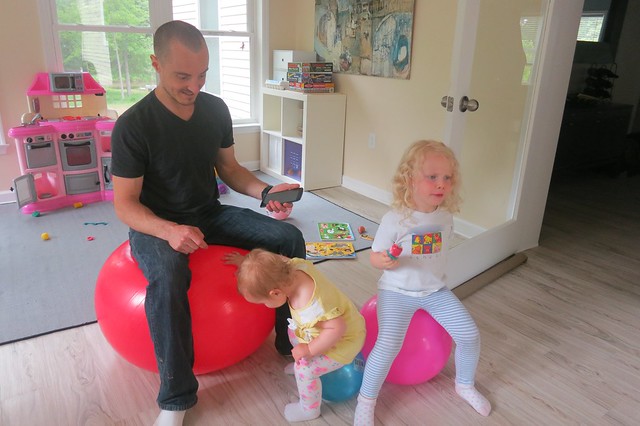 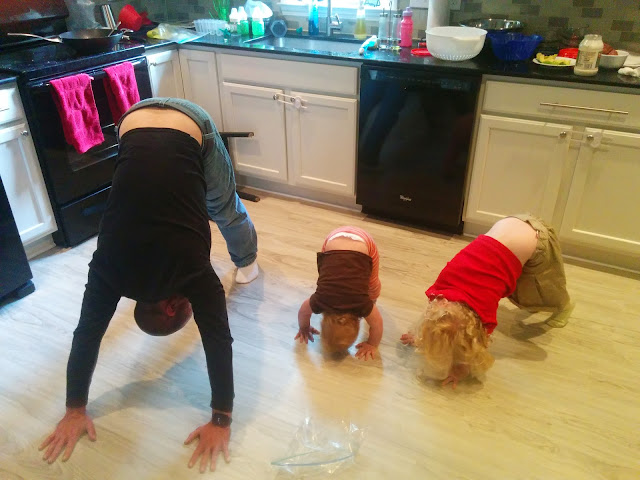 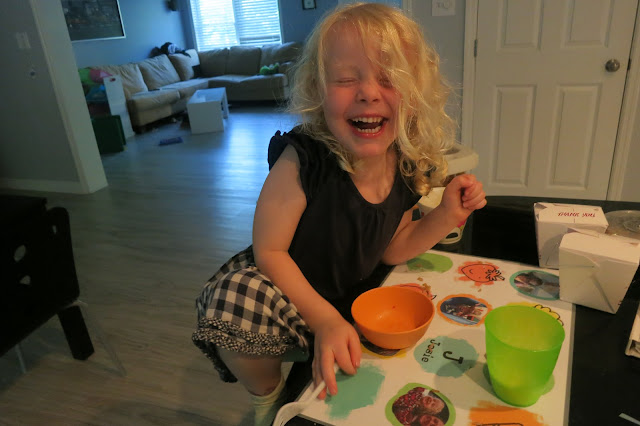 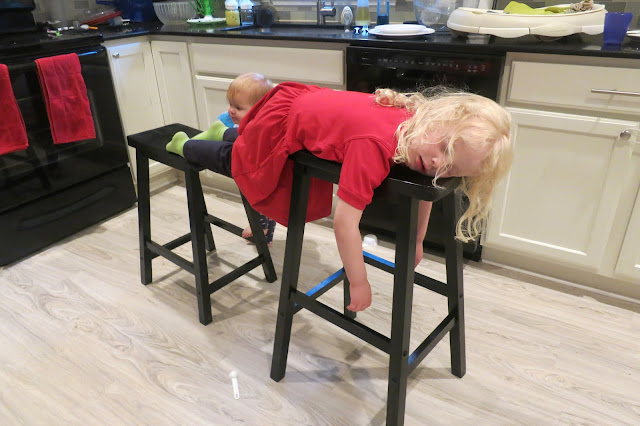 [This doesn't look as comfortable as she claimed it was] 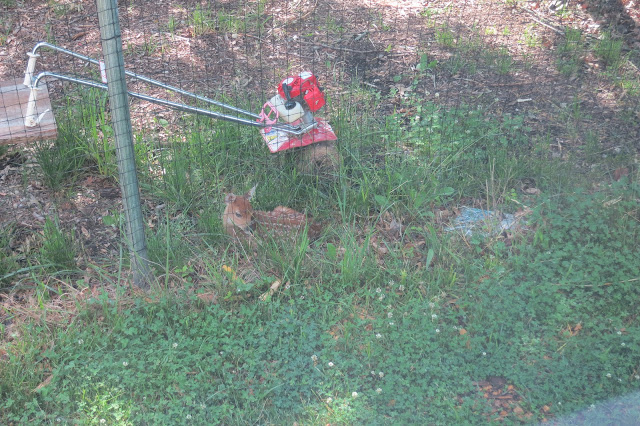 [The baby deer that somehow ended up on the wrong side of the deer fence]
at 8:25 PM