For Audra's 15th month, she continued the trend of the previous two months... and was sick. This is what I get for saying back in March that our first winter with two kids in daycare really wasn't that bad. Just when I thought we had made it through relatively unscathed, Audra got sick (just before her birthday) and hasn't been well for more than a couple of days at a time since. So she had a cold, lots of coughing and congestion (which led to some truly stellar nights of not sleeping for either of us), and a couple of days of a random fever. So her 15-month "well" baby visit to the pediatrician was a bit of a misnomer. While she's doing very well milestone-wise (can identify several body parts, knows several words - even without counting the questionable "d" words that all come out sounding like "da", like duck, dada, doggie), she wasn't quite well enough yet to get her MMR vaccine, so she got HIB instead and we'll try again in another month or so for her other vaccines. Her height (34") and weight (30lbs 6oz) are apparently laughably off the charts (literally, the nurse was laughing), while her head circumference (18 1/4") is in the 50-75th percentile. I keep asking if that's a concern, since it's such a lower percentile than her other measurements, but the doctor keeps assuring me it's ok so long as it keeps growing.

Anyway, on the nights Audra could actually breathe and didn't wake herself up coughing, she did pretty well overnight :) She was relatively consistently down to waking up twice a night, and one night only nursed once (although she woke another time or two, and was able to fall back asleep without nursing). She has been waking up either as I'm trying to sneak away in the morning or within minutes of me leaving her, except for one notable morning when she woke up and fussed a bit when I got up, then backed herself into the corner on the bed and fell back asleep sitting up (eventually falling forward and continuing to sleep on my pillow). She also, rather inconveniently, no longer tolerates me sneaking away overnight for a bathroom break. She used to just stay on the bed and cry, but after the morning when she got out of bed and went screaming through the house at 4am (mind you, screaming SO LOUD in her search for me that she couldn't even hear me as I chased her, shout-whispering her name), I now have to bring her with me.

But otherwise, she normally gets right out of bed and comes to find me in the morning. This is less than helpful for me to get ready in the morning, since she refuses to tolerate me putting her in the playard anymore, and unmitigated screaming is no fun for anyone. But luckily (sort of), she can now easily climb on the toilet, so she entertains herself doing that. Even better than that, though, is when she discovered she could reach the sink herself. So now she happily plays in the water while I get ready, which is great since it makes her happy... except she falls off the toilet fairly regularly, which naturally leads to much crying :(  We also had to hide the stepstool that normally lives in the kitchen, once she realized she could just push it up to the sink and have countless minutes of fun playing with the faucet/flooding the kitchen. 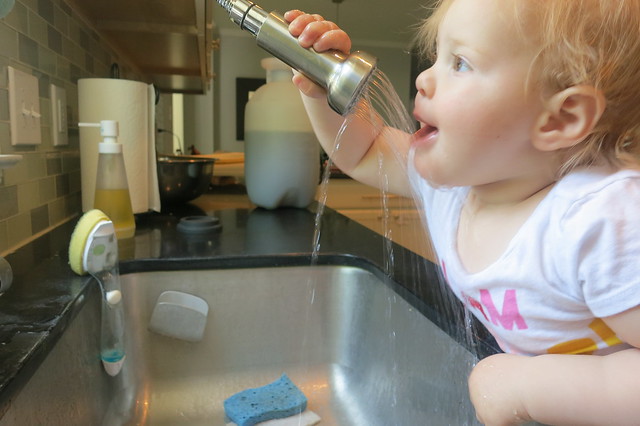 Continuing along the same theme, Audra climbs on just about everything. She climbed onto the tractor all by herself, and was very pleased as she pretended to drive it. She climbed up a ladder. She climbs up on the couch. She's working on climbing onto the dining room chairs (and then onto the table, sigh). She climbs up on the coffee table so frequently that I finally just gave up on trying to remove her, as long as she doesn't stand up. So now she just crawls back and forth on the coffee table like it's a little baby runway ;)

Looking through my notes for the month, apparently at least the beginning of the month was a bit rough (she was much more pleasant towards the end!), since there were lots of comments like "just so much crying/screaming when she's displeased" and "fussy and loud in the evening". I know when she's particularly cantankerous that she's probably going through some developmental leap (in hindsight, as it seems like she was), but that still doesn't make me feel too much better when she screams at me if she can see me and I'm daring to not touch her every moment. The evenings are especially tricky when she's going through one of these phases - she just started to do all right now if I stay put, even if I'm not actually touching her (and even lets me clean up some after dinner too! since that generally entails staying within a small area of the kitchen), but my constant motion and back-and-forth as I put things away after work and get dinner ready just sends her over the edge. But sometimes I'm able to find the humor in all the yelling, though, like when I was attempting to have a quiet moment out in the garden to harvest some vegetables... and Audra yelled at me the whole time from the sun room window (aaah! AAAHHHH!). Or when I brought down Buckle Bear for her (which is technically a monkey, but that lacks the alliteration), which she apparently found too frustrating - she carried it around, screaming, then threw it at my feet in such disgust that I cracked up at her.

Audra and Josie are starting to play together more and more. It's kind of nice that Audra basically likes the exact opposite toys that Josie did, so the things Josie barely touched when she was Audra's age are getting much more use now - either Audra will play with them on her own, or Josie will play with them too if it's part of a game with Audra :) They both love to chase each other through the tunnel, they played for probably close to an hour together with the water table, and we brought them to a playground for the first time together, where they/Josie (it was a little one-sided) spent most of the time playing hide and seek. Josie's school had an event that we all went to as well, and Audra had fun at the splash pad... trying desperately to catch and drink all the water, but also having fun just splashing around :) 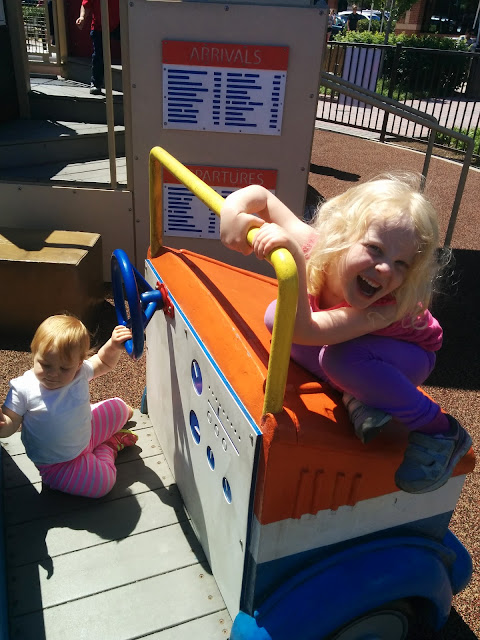 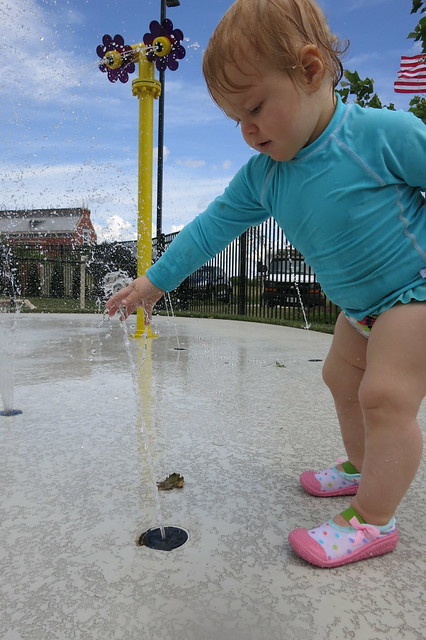 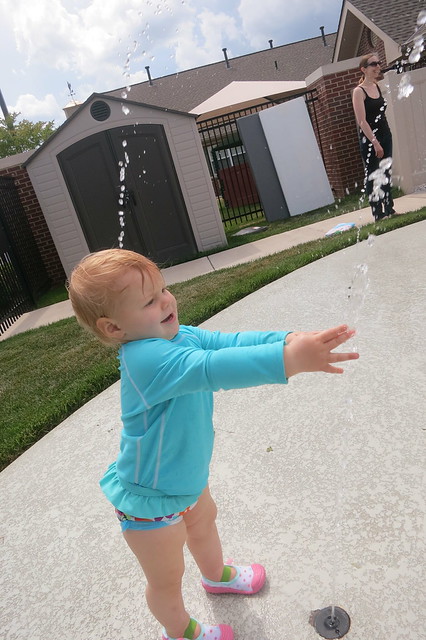 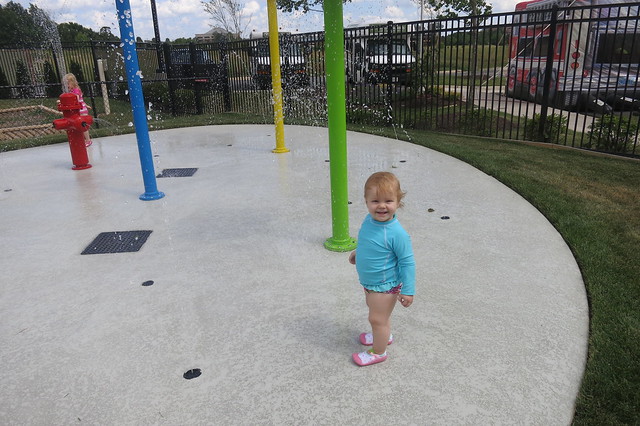 Josie danced with her ballet class too, and Audra did a great job sitting quietly throughout the performance... at least, until she saw Josie. As soon as Josie chassé-ed her way down to our end of the room, Audra immediately started calling for her, and didn't really stop for the rest of the performance :) 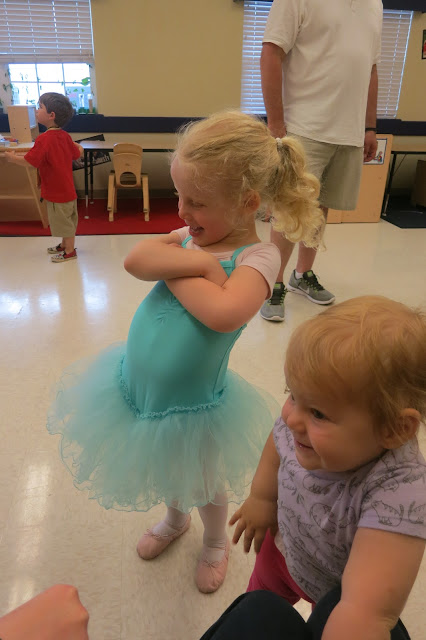 We did end up introducing whole cow's milk, since I just wasn't able to keep up with Audra anymore and the freezer stash was almost completely depleted. She spits it right out when we give her straight cow's milk, but she's been doing fine with mixing her bottles with 25/75 WCM/BM now. She did seem to get some fine bumps along her hairline when she first started drinking cow's milk, so not sure if that's related or not, but we'll just take the transition slow to give her system time to get used to it.

Their cousin Riley also watched both Audra and Josie for the first time, so Ryan and I were able to go out to dinner for our 9-year anniversary :) I believe that was our first date night since before Audra was born, which is a little silly, so hopefully we will make this a more frequent occurrence now, especially since the sky didn't fall because we left them at home. Even though Audra was crying when we left, she apparently settled down after about 10 minutes and both Josie and Audra were good for Riley after that :)

Audra seems to have decided she's going to learn how to talk now - she has been pointing at everything for us to name them for her, then tries to say it herself. She's maybe trying to say "up" and "down", and seems to be getting it when I tell her "legs up" or "legs down", which makes diaper and outfit changes quite a bit easier :) She says "turtle" surprisingly well, and also likes to aggressively say "hi" to people, getting rather pointed in her (repeated) greetings ;) She also has learned more signs, and now signs "more" (particularly when she wants us to sing for her), and "food" (and tries to say it).

Added to the list of things Audra likes are apparently dogs - she got super excited about a puppy she saw across a parking lot, and basically launched herself from where she had been sitting on Ryan's shoulders and then dragged him across the parking lot so she could squat and point at the puppy :) She also seems to finally be giving Ryan more attention - climbing all over him (including sitting on his neck and bouncing), hugging him, yelling "dada" at him. She has even refused to go to me when I've held my arms out to her, choosing to snuggle in with Ryan instead. This may not seem that monumental, but I think I can safely say that NEVER happened before in all of her 15 months of life (with Ryan or anyone else), so I'm glad she's finally warming up to Ryan now ;)

Audra also has a few little routines she likes to do now. It's just so much fun to see her start to understand her world and participate in it more. She'll (occasionally) pick out or put away her shoes in the coat closet, and will sit right down on the bottom stair for me to put her shoes on (holding up each foot for me to do so). And she recognizes it's go-time as we pack up bags in the morning for daycare, so she'll run right up to Ryan, arms up for him to pick her up, then waves good-bye to me. At the bottom of the stairs, Ryan sets her down again and she'll happily grab his shoes for him. 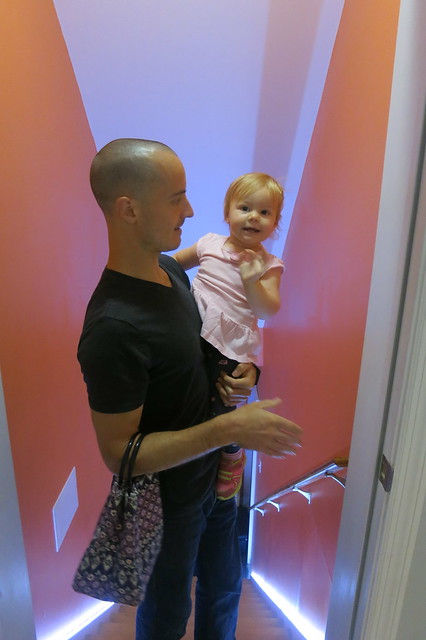 Audra also discovered the wonder of books before bed. I'll ask her to pick out a book and she brings me book after book to read to her now, which has really led to a more pleasant bedtime routine. She still cries through baby massage (just for me, not Ryan for some reason), but we both like the addition of storytime, as she cuddles up to me to read. And it seems to help her wind down more, since she tends to go right to sleep afterward, rather than it taking a couple of attempts to nurse her to sleep as it had been before. 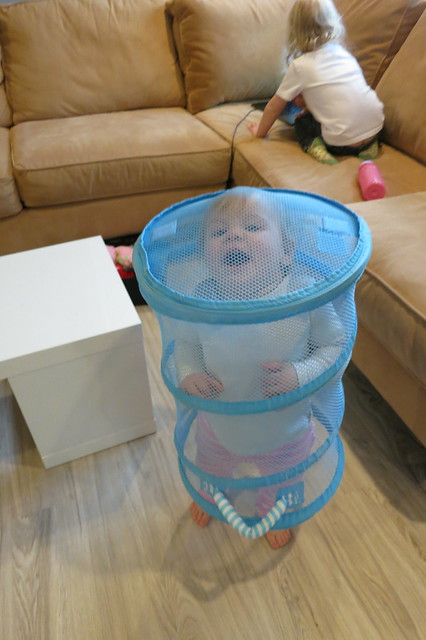 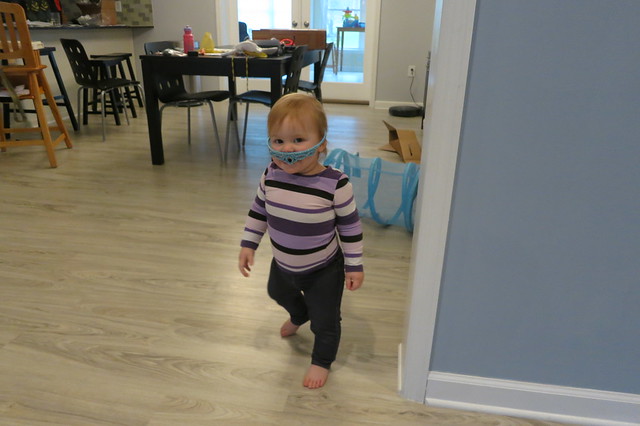 [She doesn't quite get where the tiara is supposed to go] 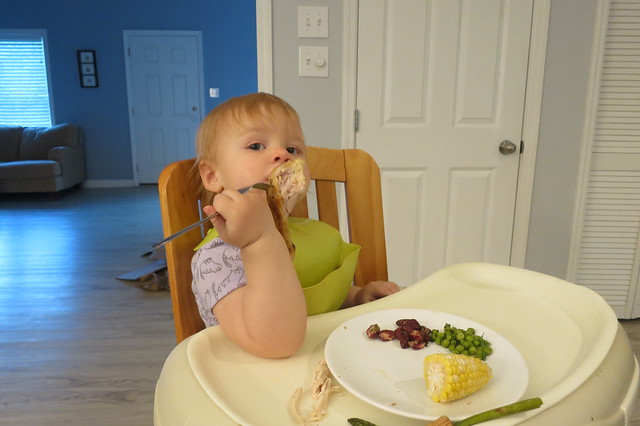 [Eating a drumstick with a fork. Not pictured: her eating corn on the cob with a fork too] 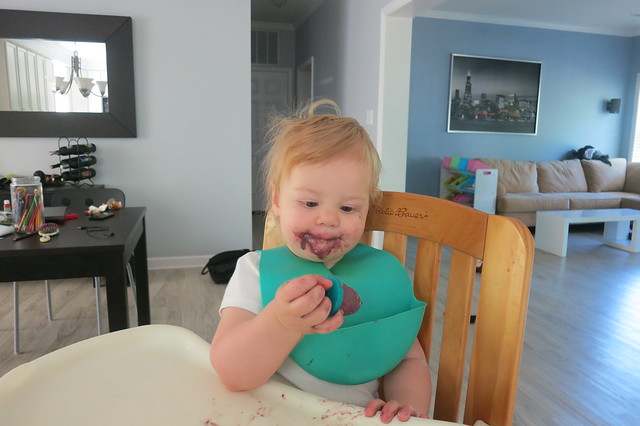 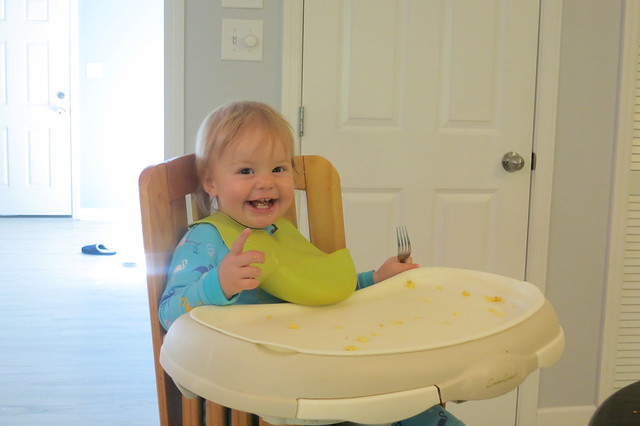 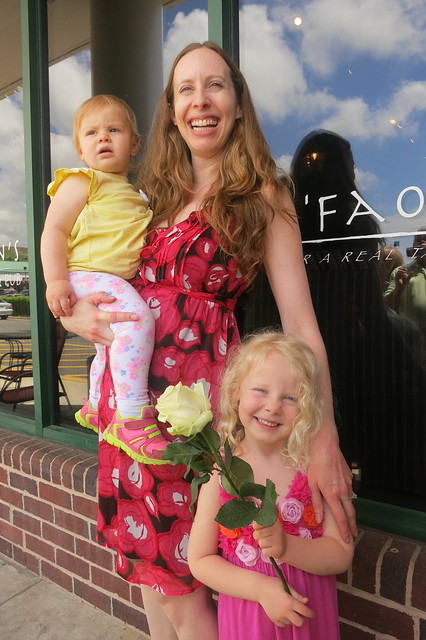