Audra's 18th month was most memorable because of her language explosion, and her very first plane ride :)

She learned what seemed to be an absurd number of words - literally picking up several new words a day for a couple of weeks. I started writing a list so that I would remember what words she knew, but since reading a list of words is probably not that exciting, here's Audra saying them instead ;)

Other funny language-related tidbits: Audra arguing with Ryan if his skateboard is a car (Ryan: "skateboard", Audra: "CAH!"), Audra telling Josie "shh, stop!" when Josie cried, Audra yelling "deer!" out the window to all the deer in our yard, Audra identifying animals by their sounds rather than their names ("NEIGH!"), Audra patting Josie's bum and saying "ewwww". Speaking of which (sort of), Audra basically asks for her diaper to be changed now, announcing "poopy!" (regardless of what it is) and running off to her change table as soon as she needs a diaper change. We got out the potty for her to start sitting on too, and while she was initially pretty excited about it, I'm not getting my hopes up too much that she'll actually potty train this early.

Flush with the success of our trip to the lake in July, we decided we should go to Michigan too, particularly while Audra is still under 2 so that we wouldn't have to buy her a separate seat. So that's what we did, going up to see my dad and stepmom in Holland for the first time since Josie was 18 months. Audra did so well on the flights - she was a bit rambunctious on the flight there (getting passed back and forth between Ryan and me, and constantly trying to circumvent me so she could kick the seats in front of us), but did much better on the way back when we were able to make enough space for her so that she could just stand between our legs. That, and I was bribing the girls with food both ways - we went through a ton of grapes on the way there, and sunflower seeds on the way back ;)

We had such a good time doing touristy stuff, with one of the favorites being Dutch Village. It was so much more fun than I remembered it being from when I was growing up, and Audra kept herself pretty well entertained (mostly with all the animals) the whole time we were there, even though she was still too little to go on most of the rides. 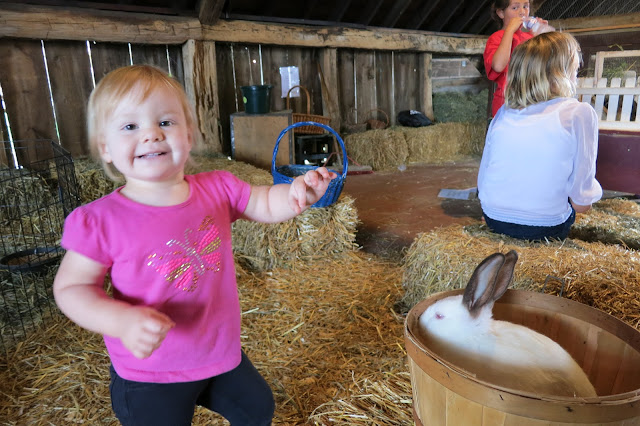 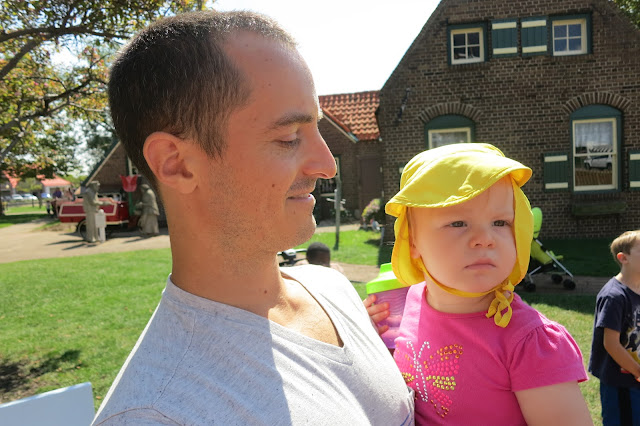 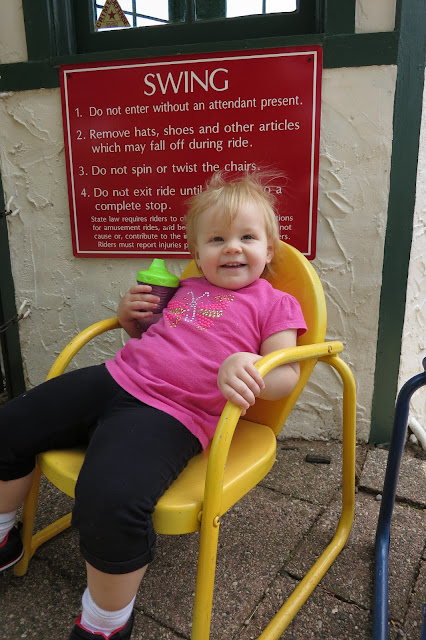 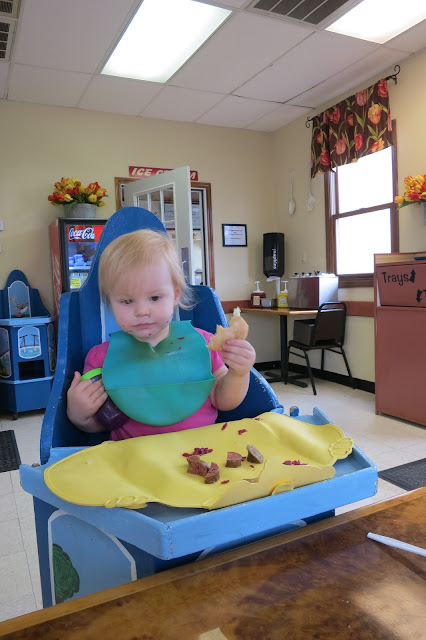 We also went to Captain Sundae, where Audra had fun playing on the boats and we were able to get away with not giving her any ice cream since she is still blissfully unaware of it ;) And Audra went to the beach for the first time in her life. She was a little unsure of the sand at first, and we were being lazy and didn't bother putting a swim diaper on her (so her diaper probably weighed as much as she did after she played in the water), but we had a great time. Audra ran in and out of the water, yelled at the seagulls, and busily moved water and sand from one place to another. 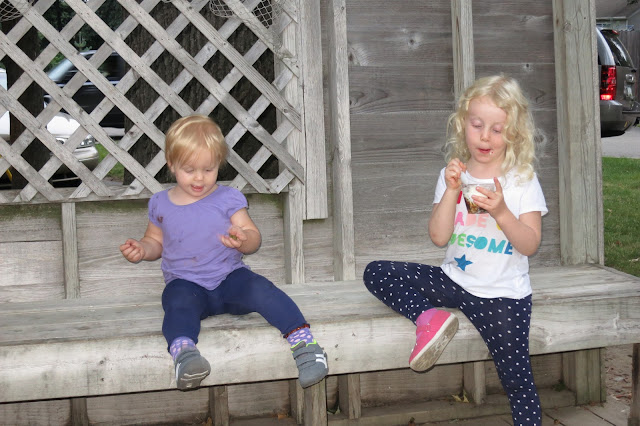 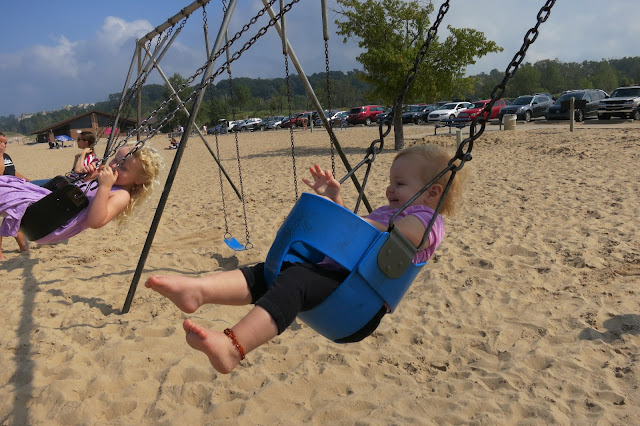 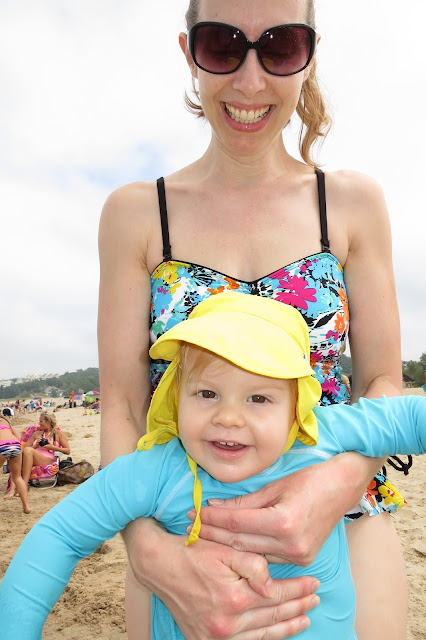 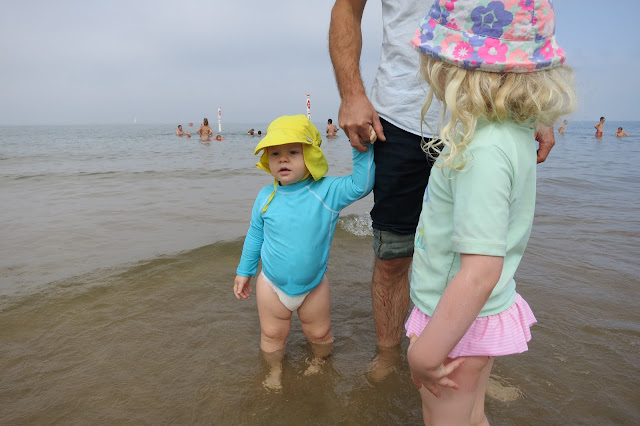 Audra continued the theme of needing to move things from one place to another at my dad and stepmom's house too. She was constantly rearranging the kid table and chairs there, and had her favorite objects (toys and non-toys) that she had an unerring ability to find wherever we put them. She particularly liked a little pull toy dog that she pulled around and hugged. 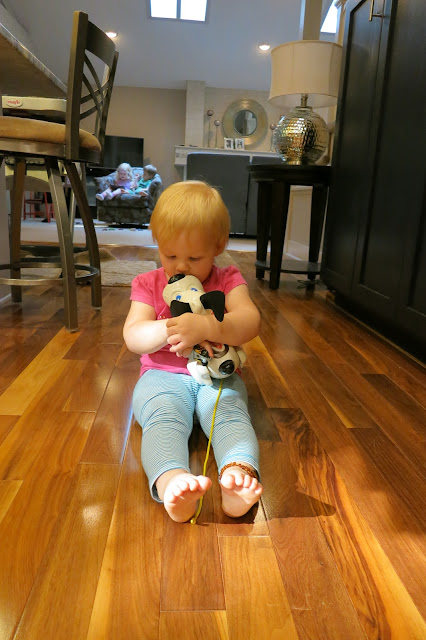 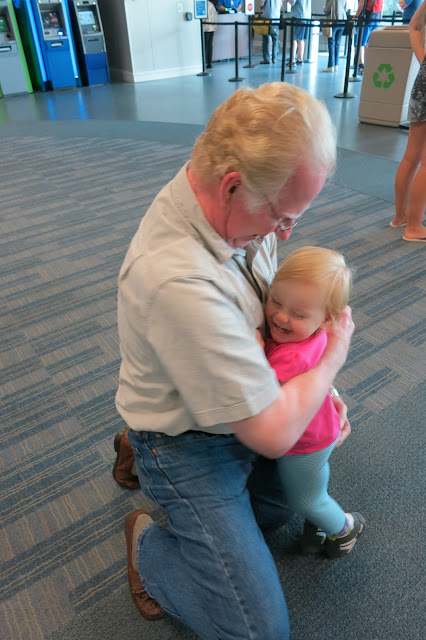 [Saying good-bye to my dad at the airport]

Unfortunately, I suspect Audra got sick from the lady who was coughing directly in front of us on the plane ride up (Audra kicked her seat, she gave Audra her cold - I guess that makes us pretty much even), so she was fairly sick and coughing a lot for most of our trip. She already seems to sleep worse away from home, and being sick too made it so she slept pretty terribly. There was only one night when she only woke once, and then one horrendous night when she woke about every hour coughing, and then eventually just wouldn't go back to sleep.... so, harkening back to her newborn days, I strapped her into the carrier and went to the recliner to see if being more upright would help her sleep. Except I forgot about the grandfather clock right next to the recliner, so I had to relocate after it started striking the hour. And although she fell asleep fairly quickly after we went down another floor to the recliner in the basement, it still took me a while to fall back asleep, and then it was only for a little while before I woke up from the back pain. So back upstairs I trudged to put her back in bed again, where we luckily were able to sleep the rest of the night without too much more disruption.

Another consequence of our trip to Michigan was that Audra dropped some nursing sessions throughout the day. I think it was primarily due to being so busy and out and about throughout the day, but I didn't offer as much as I usually do, and she didn't ask. So after 18 months of nursing about every couple of hours when we're together during the day, she actually went 4-5 hours before it was either a sleep time or her mood indicated that she really, really needed to nurse (since it still serves as an effective "reset" button for her mood). So we continued this once we got home too, and I was able to drop down to only pumping twice a day and still have enough to send three 4oz bottles to daycare each day with about half of each being cow's milk now. She still doesn't like straight cow's milk, but she seems to be doing fine with it mixed so hopefully she'll get used to it soon enough :)

One big difference from this month is that I'm now able to calm her down (at least, for physical upsets) by just holding and comforting her. Up until this point, the only ways to get her to calm down, period, were 1) nursing, or 2) almonds. So it's nice to have another option now :) She's able to climb into her high chair and up the ladder on the playset by herself now, which I find quite impressive... and nerve-wracking enough that I insist on spotting her even if she doesn't want my help. She also started opening doors consistently enough that we had to put the child-proof (and nearly adult-proof) covers on them to slow her down.

Audra is starting to cooperate more - instead of pretty much everything being a battle, she will now fairly readily put things back when asked without immediately grabbing it back up again. She also likes to fake cough so that I'll pat her back (and she'll pat mine too, if I cough). She loves to carry all the things, and especially loves other people's things, as she routinely pillages my shoe shelves or Josie's underwear drawer for things to wear. 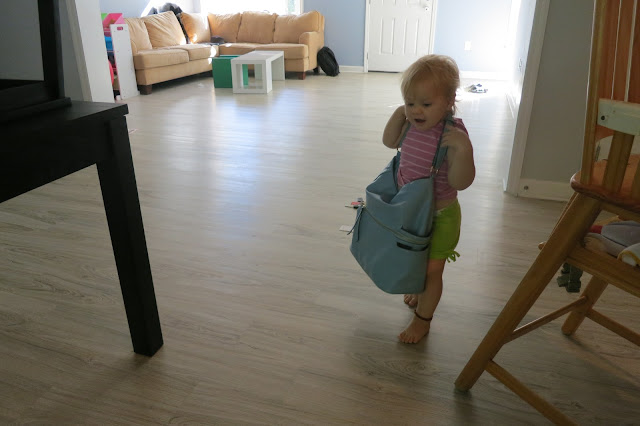 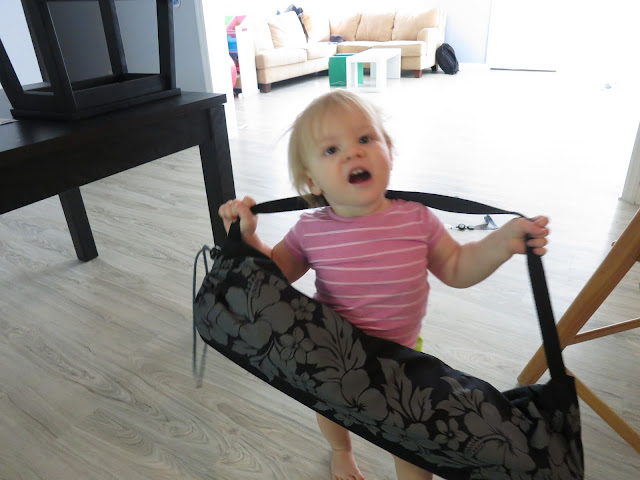 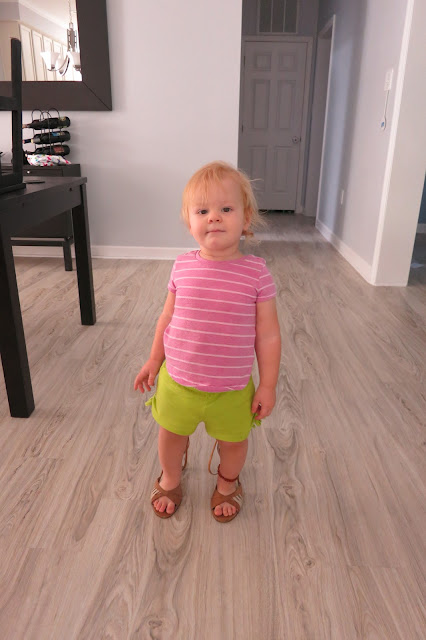 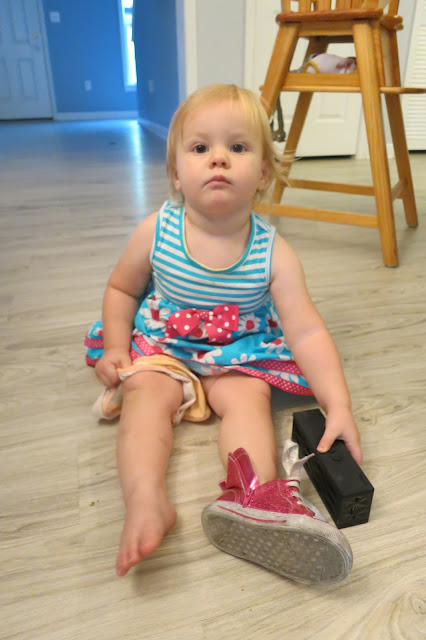 [With a more complete collection of things that aren't hers: Josie's (clean) underwear on her leg, Josie's shoe, and Ryan's speaker]

Audra likes to help with her diaper changes, which entails grabbing every diaper in her reach and shoving them under her back, all with a rather (hilariously) straight-faced expression on her face. She also likes to help gather the crew, so when we ask for her to go get Josie, she'll get her in sight and then yell "JO-JU!" at the top of her lungs at her. Audra still hates brushing her teeth though, although she's somewhat more willing to cooperate so long as I sing to her (immediately signing "more" and opening her mouth when I stop)... but only if I sing the right songs to her. She likes "Rock-a-bye Baby" and "The Ants Go Marching", but does not care for "You Are My Sunshine", as it turns out. She also loves when I put garlic mullein oil in her ear (which we use whenever she has fluid or an infection in her ear), which is a good thing, given how frequently I do it. The routine is that I put a couple of drops in each ear, massage it in, then wipe away the excess. So she'll say "ear!", grab a burp cloth to cover her clothes, point to her ear until I put the oil in, then will squish her ears for me before she rubs them quite vigorously with the burp cloth ;)

She also did what I believe was her first joke (or at least the first thing she did that she seemed to recognize was intentionally silly): she kissed her toothbrush after she had been blowing kisses to me, and immediately burst out laughing :)  And she perhaps is starting to intentionally antagonize Josie more too: she was saying "bye-bye" to Josie one morning, and then continued insistently saying it to her long after Josie made it clear she was done with the interaction. I wasn't entirely sure if Audra was just being very thorough with saying good-bye, or if she was actually messing with Josie. On a related note, if we ask her to say sorry now, she'll gently rub her hand on whoever she offended... very sweet :) 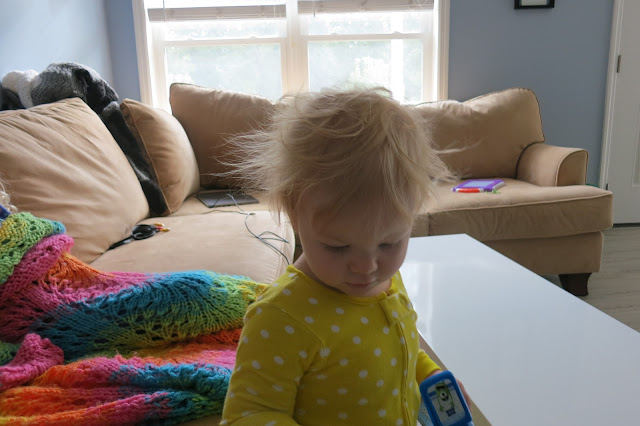 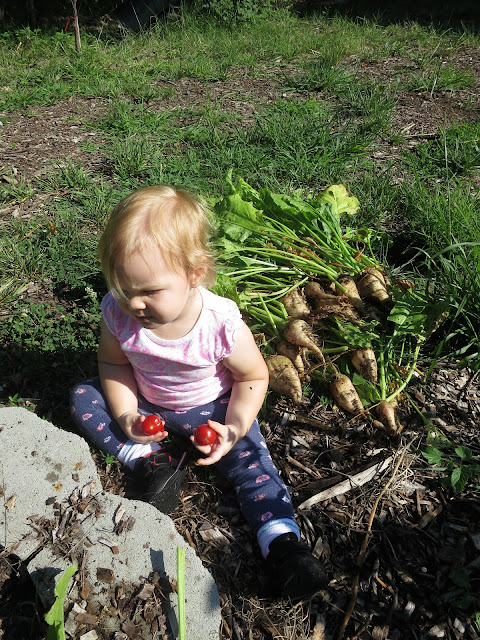 [Helping me harvest in the garden] 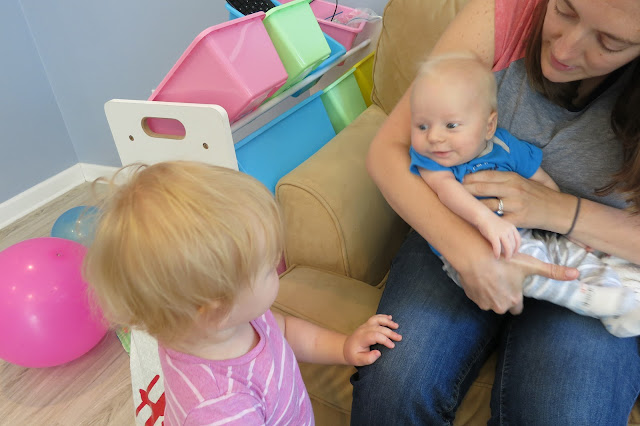 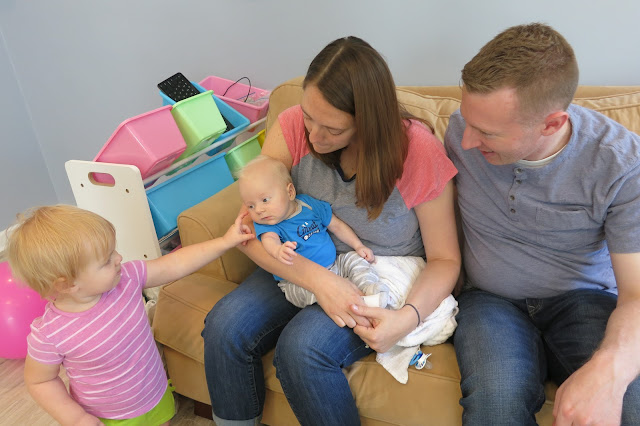 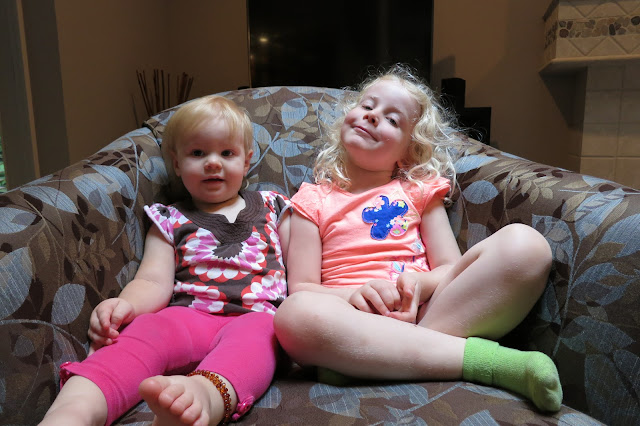 [Navigating the incline/decline of the bridge on her own]