Much like Audra's August, Josie's August was most memorable because of our trip to Michigan. This was the first plane ride that she remembered (the only other plane trip being to London when she was 14 months), and she did really well on the flights, except for her "tummy feeling funny" a couple of times. We had a barf bag all ready for her anyway, but we were still glad that she didn't actually need to make use of it.

In preparation for the trip to Michigan, Josie and I did a dry-run at the airport as one of our "Mommy/Josie outings". So we wandered around the airport for quite a while as she asked a bunch of questions, and we watched the planes land, talked about where everyone might be going, and looked for their tickets and/or passports. While it seemed like her favorite part was the retractable belt barriers, I think it was still good preparation for her :) She was bitterly disappointed when we left without getting on a plane, but I promised that the next time we went to the airport, we would have our own tickets and would be able to ride on a plane too. And that's what we did :) 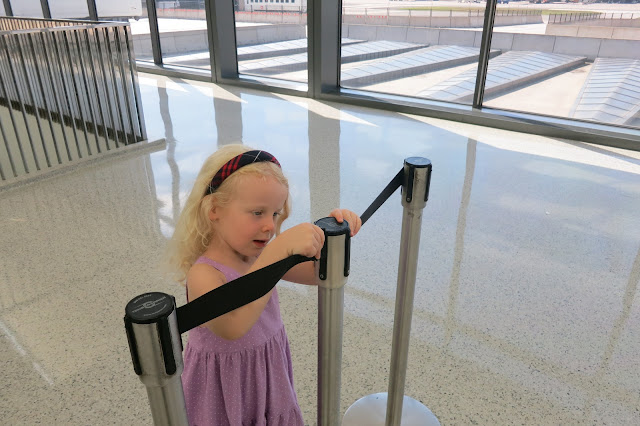 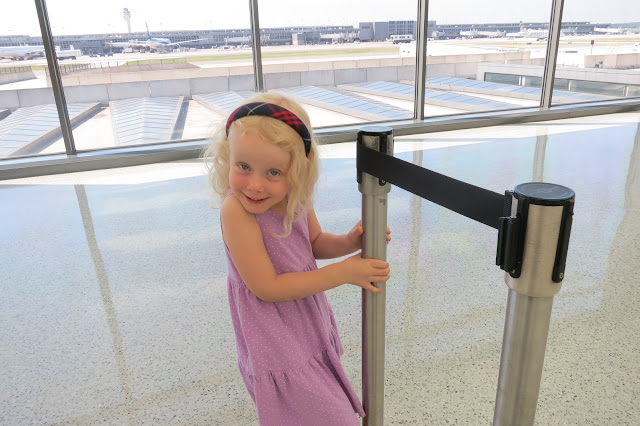 So up we flew to Michigan for the first time in over 2 years to spend some time with my dad and stepmom. I decided to approach this trip a little differently from the usual, when I would fly up with the plan to visit family and then just see what other friends I could catch up with. This time, I was going for thoroughness and efficiency ;) So I really tackled this trip back to my hometown the way I would for a trip to a new city: I researched the local attractions (including Dutch food, which I don't think I had ever had in my 17 years of living in Holland), and we put together a list of the people we wanted to see and the things we wanted to do, and I worked out a rough schedule so that we could make sure to fit everything in. This did feel a tiny bit over the top, but even still, we didn't end up making it to the beach for more than just a couple of hours. So I feel a little bad about that, but besides that, we ended up having such a great time :)

First stop was Dutch Village, which, as I mentioned in Audra's post, was SO FUN. Teenage me can't believe these words are even coming out of my mouth, but it was really just a perfect destination for the day. Josie took a picture with the same stork that I have a picture with from ~30 years ago (Audra had already taken off to yell at some ducks), and she just had a great time with all the activities there: slides, plasma cars, animals, swings, giant wooden shoes, etc. 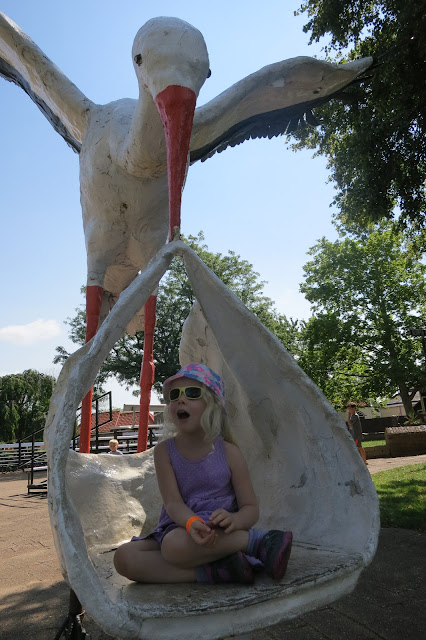 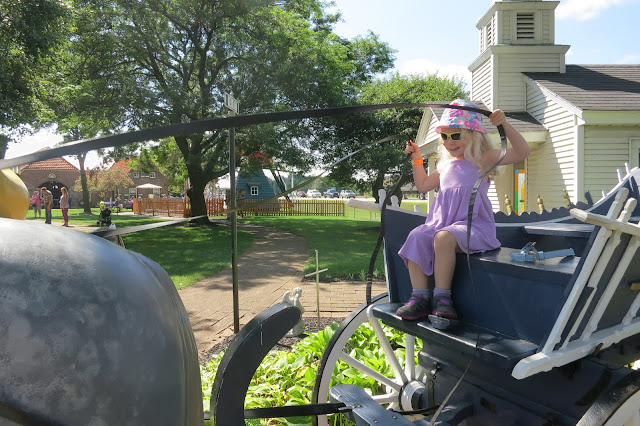 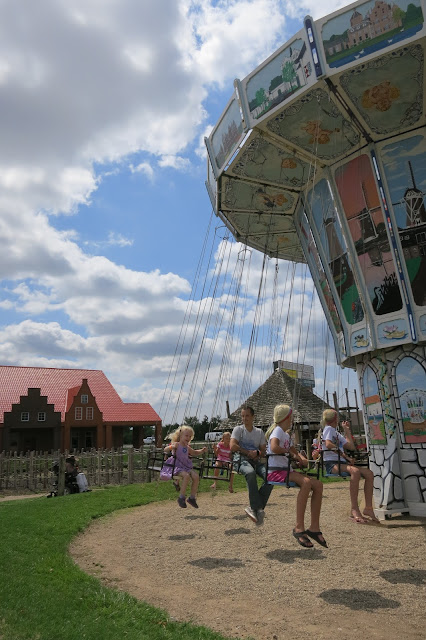 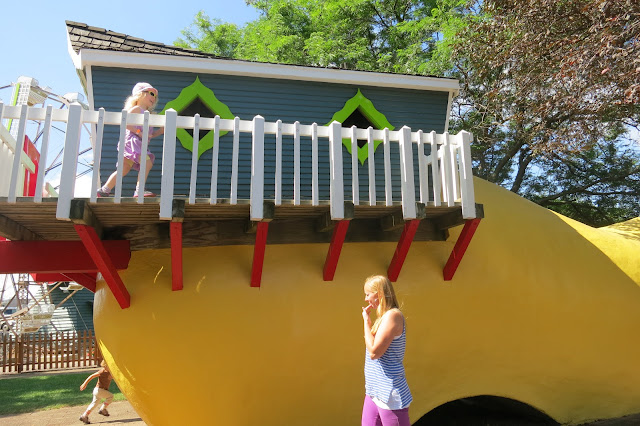 We all went on the Ferris wheel together, which was really fun... except for the fact that I'm apparently afraid of heights now? I've been on some pretty crazy roller coasters, although not for many years, which apparently gave me enough time to get more apprehensive about heights. So under the guise of keeping a hold of the baby, I left a sweaty palm print on poor Audra's shirt as I was gripping onto her for dear life (she was fine). 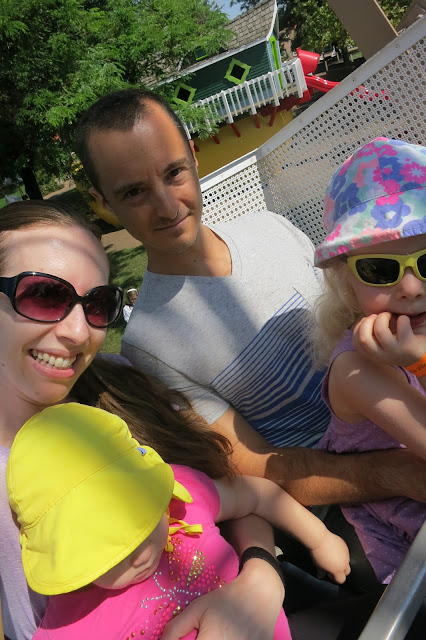 We even caught the Dutch dance demonstration, which I just love - despite all my childhood hangups regarding the fact that I never got my own wooden shoes (they're expensive and break too easily, per my parents... and me too, since I told Josie the same thing when she asked for some ;) ), and I never got the "pretty" Dutch costume (the purple one that now I can't figure out the name of - but see how pretty?). And yet, and yet... the sound of Klompen dancing is still one of my favorite sounds :) Josie and I even participated in some dancing after the "official" demonstration, and luckily there is no video of that ;) 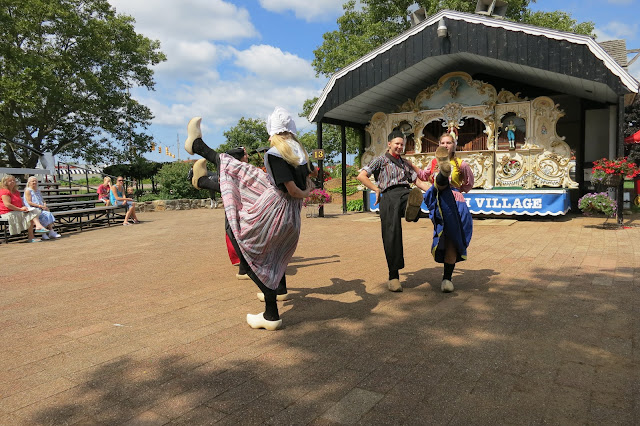 We had some Dutch food at the cafe on-site (which consisted of pigs in a blanket, pea soup, and Dutch apple pie for me), and we capped off our first full day in Holland with a trip to Meijer, where the girls rode Sandy the pony over and over again. The next day we headed over to the home of one of my old horse riding buddies to visit with her and her kids for a few hours, and that evening, we went out to dinner and wandered around downtown Holland with my dad and stepmom, and then stopped at Captain Sundae on the way home. Josie was so excited at the mere thought of ice cream that she was practically collapsing in my arms, and I dare say it lived up to everything she had hoped for ;) 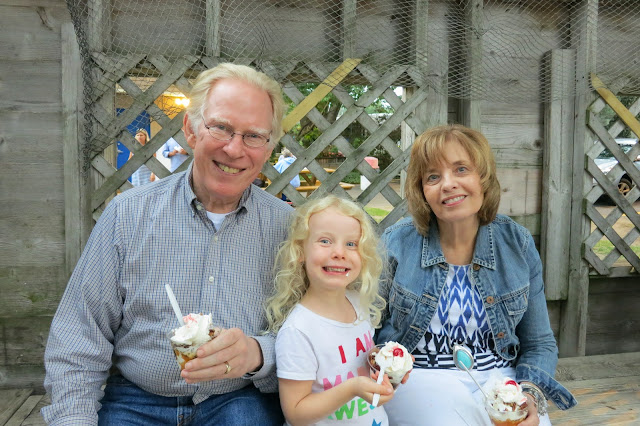 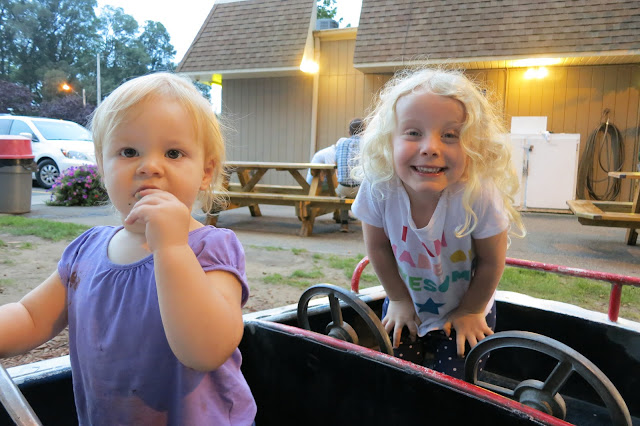 The third day (Saturday), we did the one thing Ryan had added to the list: we went to Menard's. Menard's, as in a home improvement store with a grocery section. I made fun of him pretty relentlessly, but he swore there were Corian cutting boards available for much cheaper there than we could get elsewhere (and which he needed for a project he was working on), so we went for it. I had to eat my words, though, since I ended up really liking the cutting boards too, so we ended up taking three home (for cheap!), plus sunflower seeds, barrettes, and other things that have little to do with a normal home improvement store. Then we went back downtown to meet up with one of my dear high school friends (and her boyfriend) for dinner and coffee. 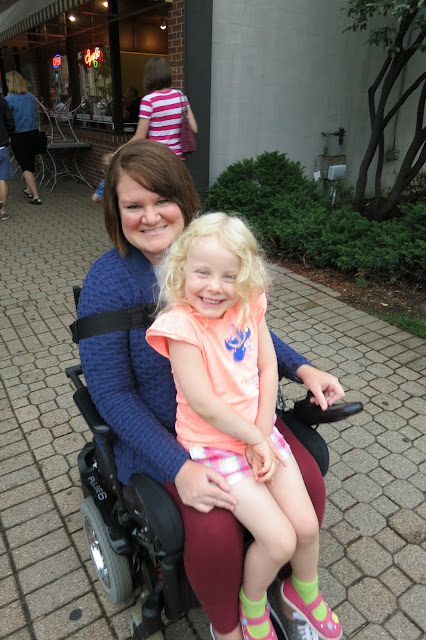 We also got stuck waiting for a train. Josie has been on a passenger train before, but this was the first time the girls had seen a freight train. This was a momentous and super exciting occasion... at least, at first, before they realized that 1) it was slow, and 2) it was long. Then the questions started coming: When is this going to end? Why is it so slow? Is it over yet? HA. Story of my childhood. These are the things they don't have much of an opportunity to learn about, since we don't really have trains around us at home, so I regaled them with fascinating, suspenseful stories of us trying to outrun the trains by racing to other intersections to try to cross ahead of it. They were thrilled. 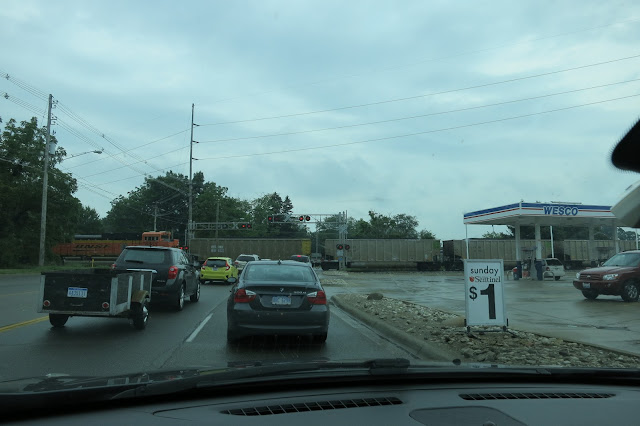 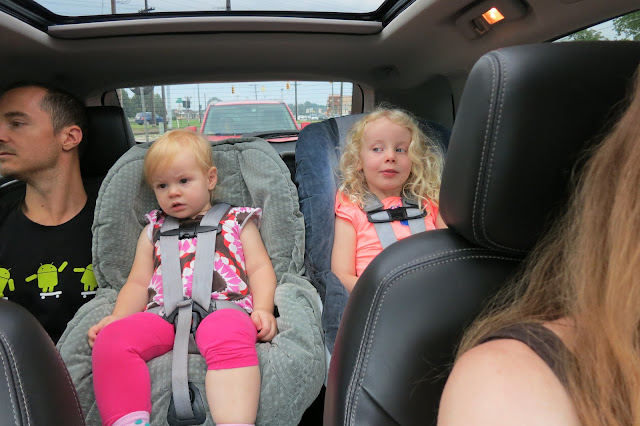 On our last full day in Michigan, we finally made it to the beach, where the girls saw more sand than they ever have in their lives (and I quickly remembered how hard it is to walk through that much sand, since my calves cramped up). They loved the swings, they loved the sand, they loved the water. They just didn't like leaving, but alas, they both still needed a nap. 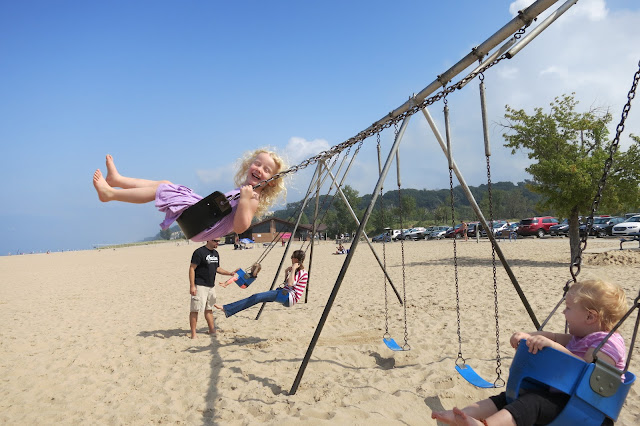 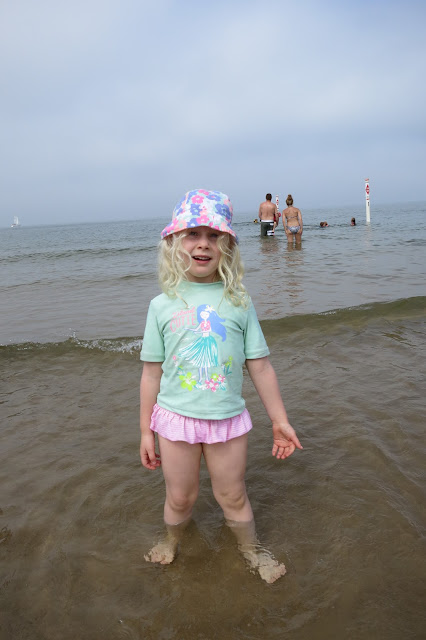 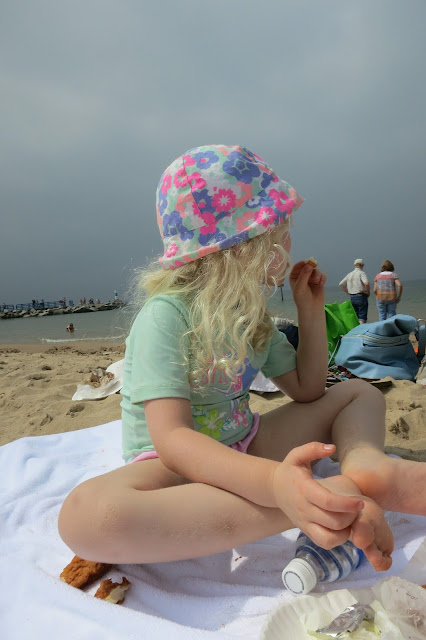 That evening, we went to the fairgrounds, and the girls got to play on some of the same playground equipment I played on as a kid too. Josie ended up scraping her knee and was crying pretty hard, so as we were wandering around in search of some water to wash off the blood, I tried to distract her with stories of the times I showed there. This backfired a bit, since Josie and I ended up having the saddest conversation ever about my old horse Jane, with both of us nearly in tears all over again as I talked about how much I missed her every day still :(

And then finally, on the last day of our trip, we got to meet my nephew Alex. He had just been born (and was still in the NICU) the last time we were in Michigan, and had been sick most of the time we were in Holland for this trip, so we weren't sure if we'd get to see him this time either. But he came over on Monday, and the kids had a good time playing before we needed to head out to the airport again, where Josie was sad anew that she would miss her grandpa and grandma when we went back home :( 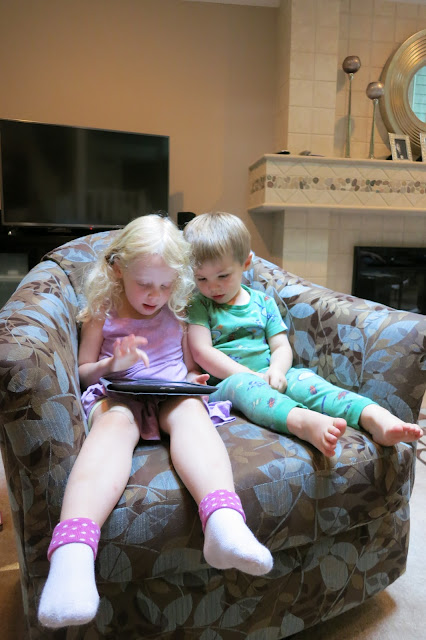 Probably the most exciting thing that happened in August besides the trip to Michigan is that Josie and I saw a double rainbow ;) We were just leaving her school at the tail-end of a rainstorm, and just as I was telling her that this was perfect rainbow weather, I happened to look up and saw a full-on double rainbow, from one end all the way to the other. I am not at all embarrassed to say that we both freaked out and were jumping up and down and squealing about it :) And then, of course, we came home and watched the double rainbow video, and Josie was very perplexed with why the guy was so emotional (I definitely understood it more, though, now that I've seen a double rainbow too - they are pretty glorious).

On the other end of the spectrum, August was a bit rough with Miss Josie as she went through a (thankfully) short-lived regression at school, where she wasn't listening to instructions, and was trying to sneak things by us that she knows are against the rules. We kind of expected that, given that some new kids started in her class for the new school year, but it's still hard and a little disorienting to go through, since that's just not how Josie usually acts and being upset with her is just such an unfamiliar feeling for me. And I got in a couple of other disagreements with her, mainly around her ignoring me or flatout refusing to leave school when I pick her up - since, while I'm happy she likes school so much, I also don't appreciate her refusing to leave.

The garden was still doing all right in August, although really, the okra has been the shining star this summer. It's so pretty, it was a bountiful producer, and the stems grew into quite impressive tree trunks. It's hard to tell from the picture, but these are at least a couple of inches in diameter, and were (apparently) sturdy enough to support the weight of oh, say, an adult woman falling into them (don't ask me how I know this). The cucuzza squash also were quite prolific, although since we didn't really figure out what to do with them, they were a little less useful and a little more of a hassle. I also pruned the fruit trees for the first time, so we'll see if they come back next year or if I've irreparably harmed them, despite my careful research into proper pruning techniques and shapes for each variety. Fingers crossed. 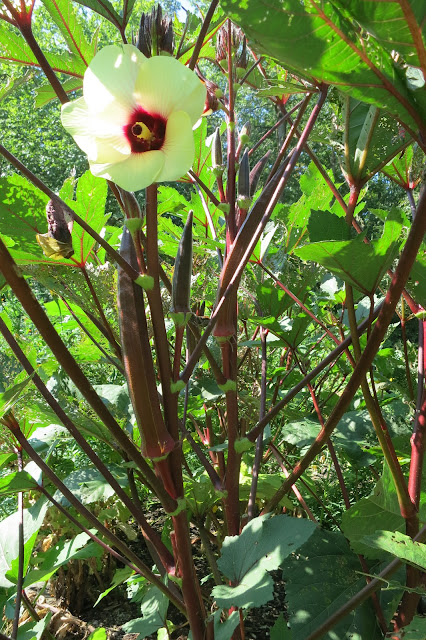 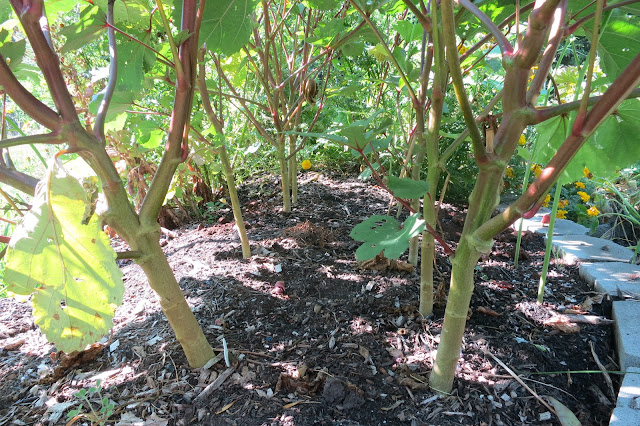 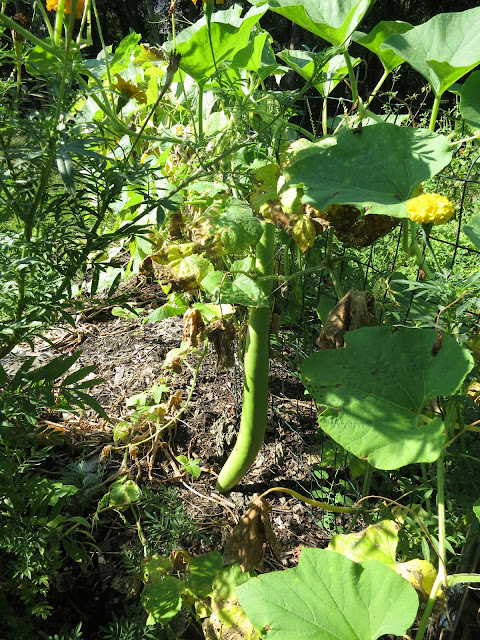 [Cucuzza - they just grow until they reach the ground, even if they're starting from 3' up] 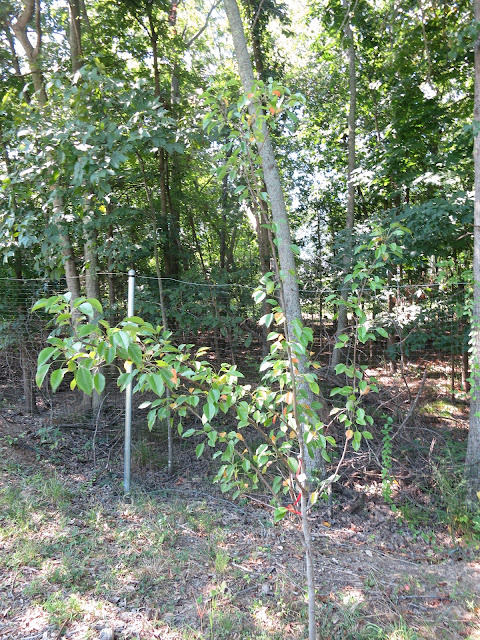 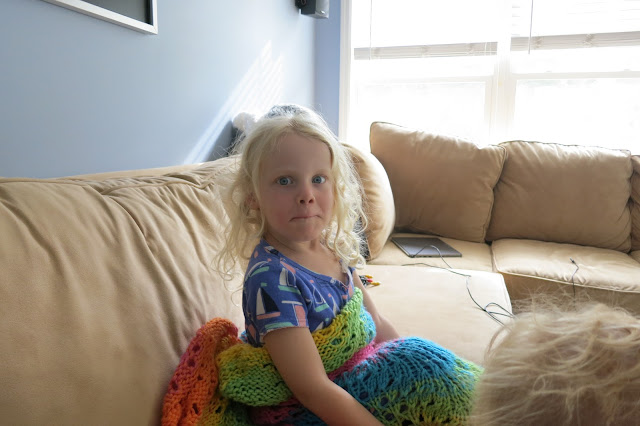 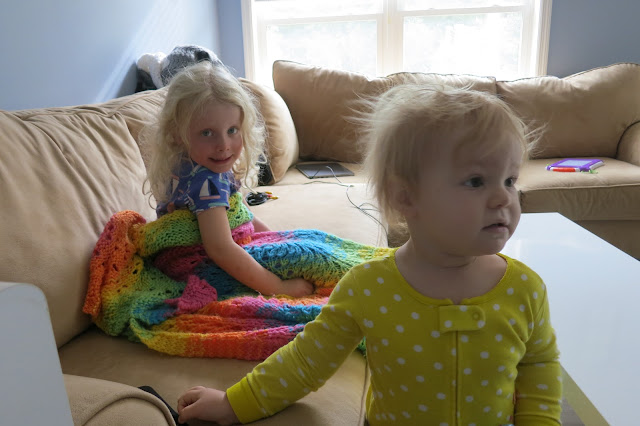 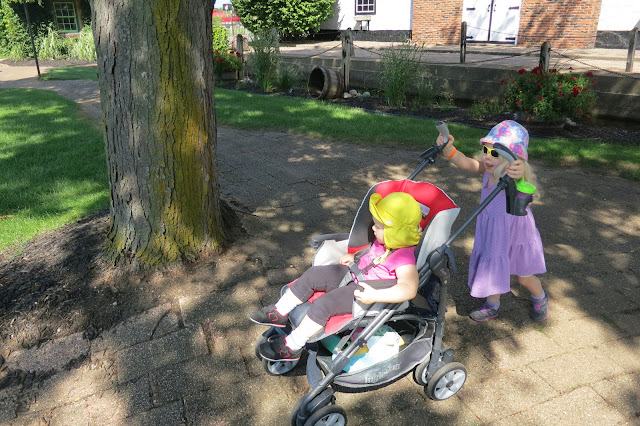 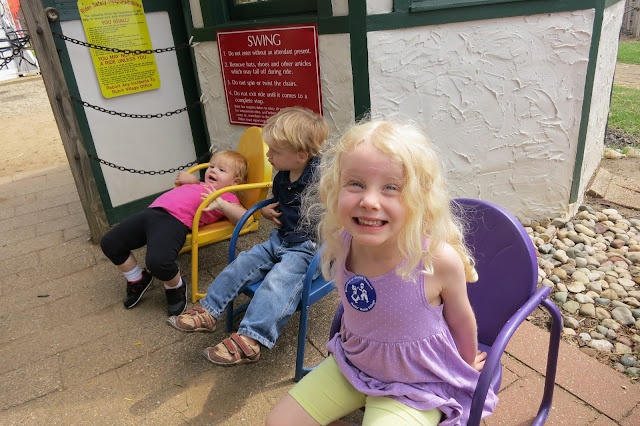 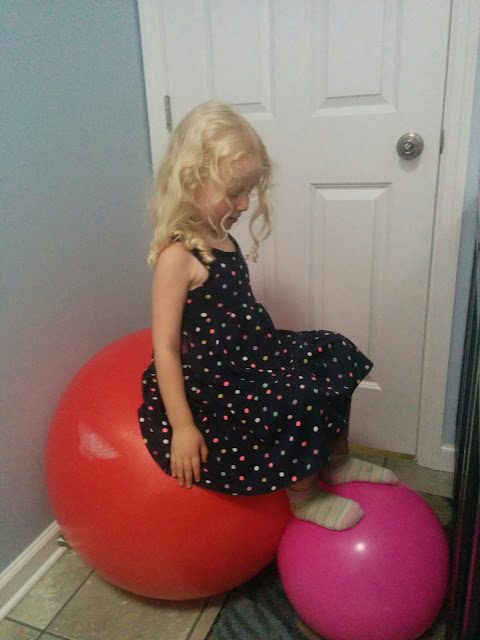 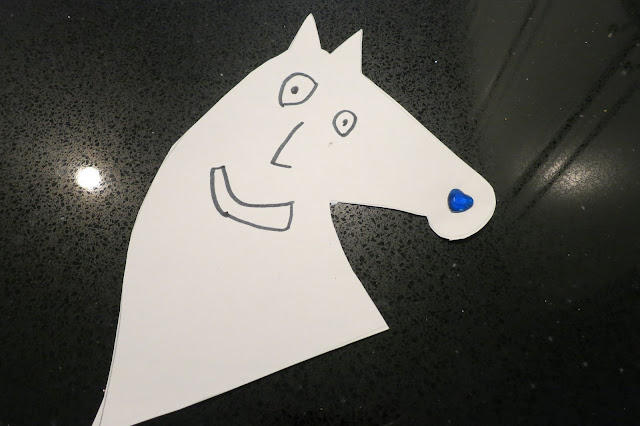 [Josie's not very accurate (and yet still strangely cute) horse]
at 4:38 PM