After the excitement of Audra sleeping through the night last month, we settled back down to more of her normal: waking anywhere from two to "many" times overnight. I was half-heartedly hoping that a switch would flip once she had slept through the night once, and she would just start sleeping through the night all the time. I also didn't really think it would happen, so I wasn't too disappointed when it didn't ;) She was also sick through most of October, so waking a bunch of times from coughing didn't help matters.

On the other hand, she is starting to wake up more calmly. Normally when she wakes up when I'm getting ready for work in my bathroom, she gets out of bed, turns off the fan, shuts the door, and then crosses the house to me - all the while, screaming at the top of her lungs. This is a slightly traumatic way to start the morning, so it's been a welcome change that she has done her whole routine and come to find me without crying at all... one time even coming in, giving me a hug, and then quietly laying down on the floor. She is not one for being still or laying down when she could be climbing on or dismantling something, so this was especially surprising to me ;)

And then on the other other hand, one morning she was just being a bear, and was screaming and yelling "my milk!" at me and wanting to nurse the second she got up... despite the fact that she had just been nursing up until the minute we got up. I put her off as long as my eardrums could handle it to try to finish up getting ready before nursing her, and then she was perfectly pleasant and happy again afterwards. And that right there is one reason we're "still" nursing (well, besides the bonding and nutritive aspects of it, etc. ;) ). While she does now sometimes accept hugs or books to help calm her down when she's upset, nursing is still the easiest and most effective reset button for her. 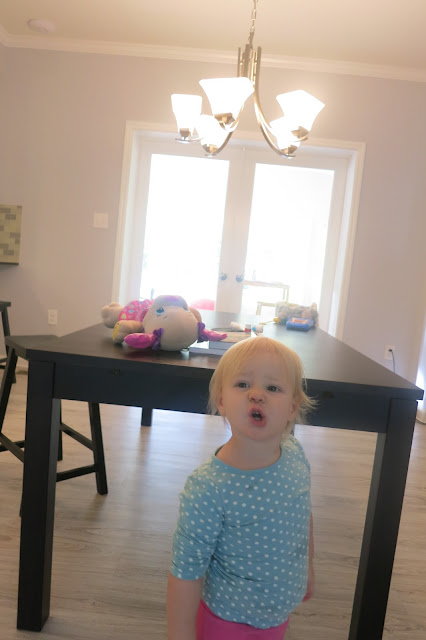 [This is what Audra looks like when she's saying "milk"]

More talking-related stories:
Audra is suddenly more interested in electronics. While I wouldn't normally be excited about letting her watch TV or play with a phone, she was never interested in it before and getting a short break from the relentlessness that is taking care of Audra is most welcome (she is a most wonderful and impressive child, but my word, is she high-touch and so very busy), even if it's just to sit down and watch TV with her. So she has apparently learned that if one were to say "OK, Google" to a watch or the TV remote that magical things would happen... so now she grabs the remote or our watches and yells "Oh, Google!" and then whatever search term she's most interested in at the moment, usually owls or boats. Although it's never once worked for her yet, this is beyond adorable :) 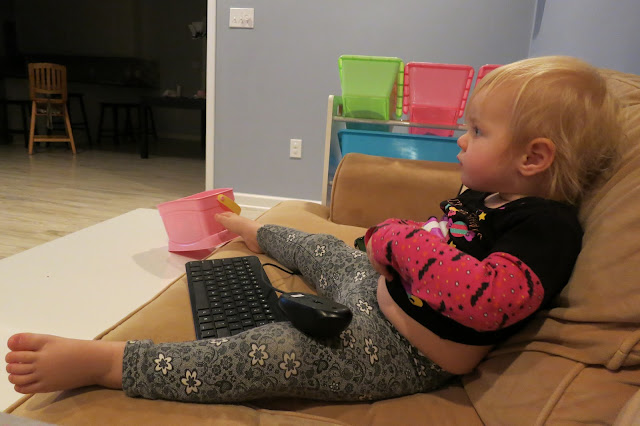 We went to a pumpkin patch with my side of the family, and Audra had a wonderful time. She loved all the animals, but especially the goats, which she shouted "baa" at and fed them leaves. She was so thrilled with lunch that she kept bursting out into giggles, since she got to sit on the bench next us (rather than sitting in a high chair) and eat a pile of meat and pickles. This also marked the first time that I figured out (or really, attempted at all) to do a back carry with the carrier. Audra appeared to especially like the part where she was balanced precariously on my back, and wanted me to strap her in and let her out repeatedly. Due to the "balanced precariously" part of this exercise, we unfortunately had a different opinion on how much times we should undertake it ;) 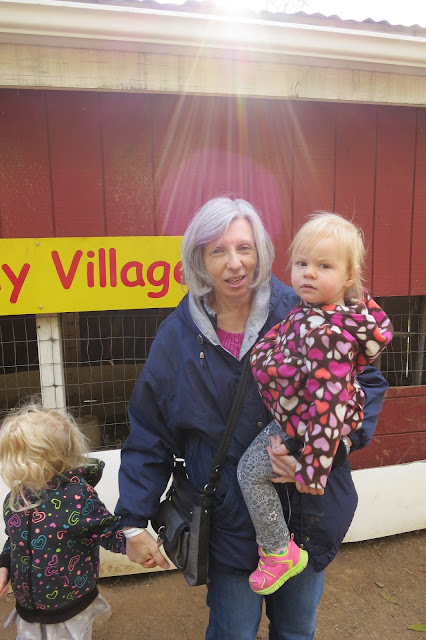 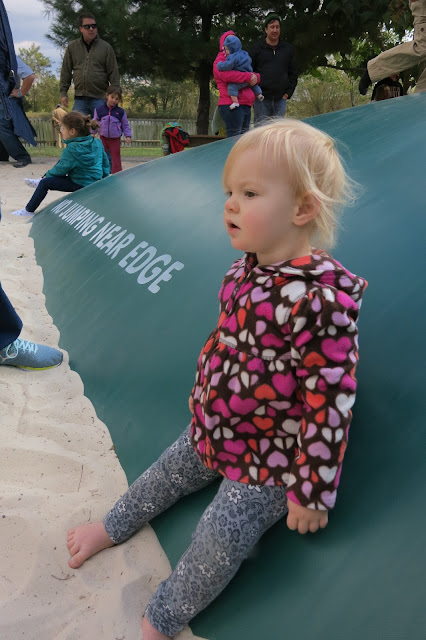 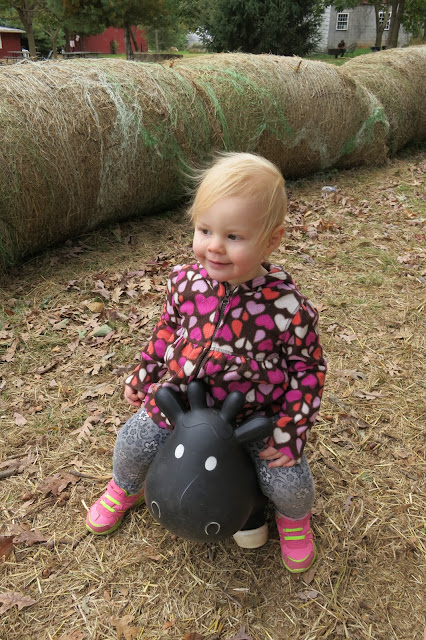 This year was also the first time that Audra went trick-or-treating, and although it also seemed to be a bit soon for her to go (since how much candy does a 1.5-year-old really need, anyway?), she did have a great time anyway. She was a little unsure of the costumes at first, and preferred to stay in the wagon (where she inexplicably decided that she had to grab Josie's seat whenever she got out, so they just rotated seats for the first few houses), but then realized that she would get to ring doorbells, grab handfuls of crinkly stuff, and have people coo over her if she went with Josie, so then it was on. 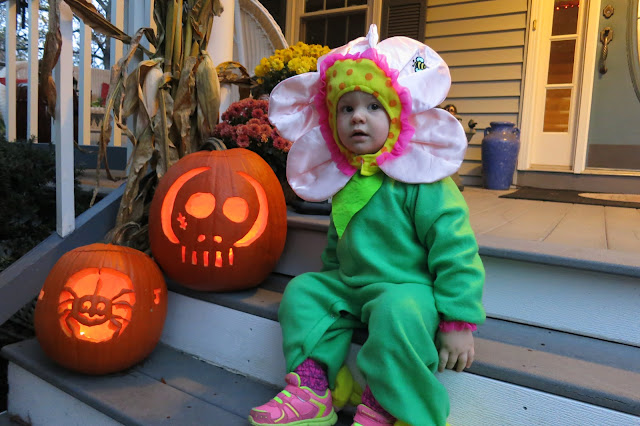 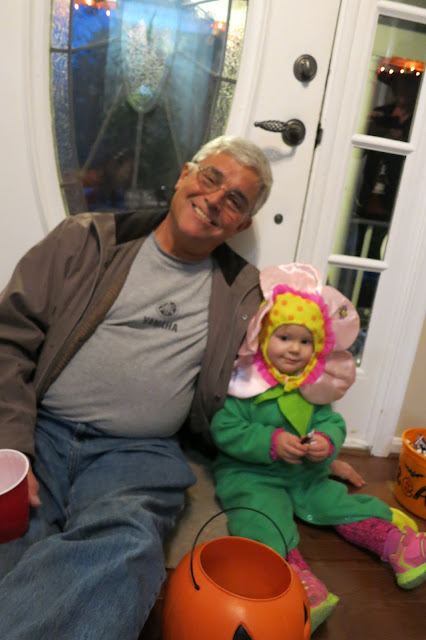 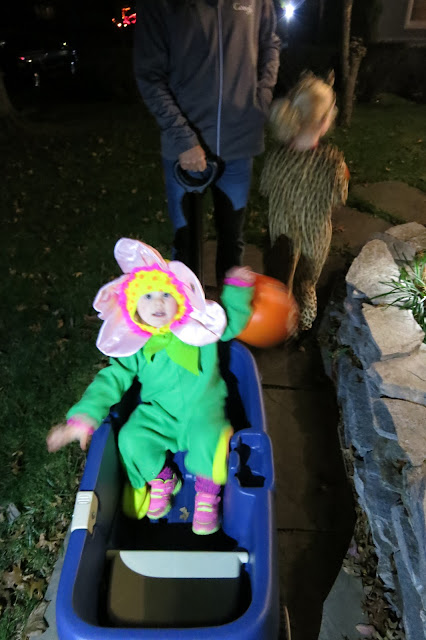 Audra is definitely a kid who does better when she has a job, and so it's usually to everyone's benefit if she's able to be involved with an activity rather than trying to keep her away from it. So I've finally begun including her in certain chores, even if the chance of disaster is fairly high, like unloading the dishwasher... and she actually does a really good job with it (and no broken dishes yet!), handing me each item individually without too much distraction (usually announcing "here!" each time). She also is on point with throwing things out, which has been quite helpful to me to be able to give her my trash to throw away instead of Ryan (who is decidedly less enthusiastic when I do that to him ;), and getting her ready in the mornings seems to go a little more smoothly now that she's picking out her own shirts.

Audra managed to fall right on her nose on the side of the coffee table, and had brown blood coming out the rest of that day, which seemed fairly reasonable, but the blood seemed to increase two days later (still brown, but still). I brought her in to the pediatrician just to be on the safe side, she got checked out (and she is now a robust 34.4 lbs) and her nose appeared to be fine. However, since she was otherwise actually healthy, she finally got her MMR vaccine (which is first recommended at 12 months, but she was apparently sick enough for the last 8 months that this was the first opportunity she was healthy enough to get it). She only flinched a tiny bit for the shot itself, got a bit grumpy in the evening and said "ouchie" about the injection site on her leg, and went to bed a little earlier than normal that night, but that was really the full extent of her reaction. Josie had a tougher time with this shot in particular, and I naturally much prefer it if the fevers, swelling, rashes, whatever, are kept to a minimum after vaccines.

For as fearless as Audra is about most things, it always surprises me when she's actually scared of something. I brought her to the party store just before Halloween, which was apparently not the best idea for her, since she was scared of just about everything there (e.g., the giant blow-up Frankenstein, the ghosts hanging from the ceiling, etc.). We also randomly (and hopefully fortuitously) met the owner of a stable that's located just 10 minutes from us, so we went out to see his horses one weekend (and although I didn't secure a horse to ride yet, I'm hopeful for next year, when I assume I'll have a little more free time to start riding again). Audra was simultaneously intrigued and terrified of the horses, saying "neigh!" to them very excitedly, followed quickly by "neigh, bye!" and clinging to Ryan. 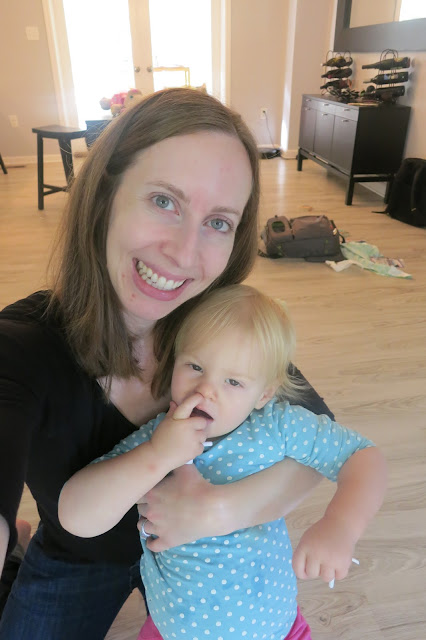 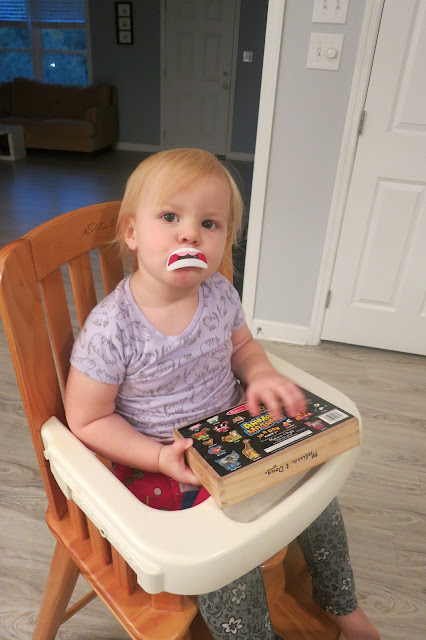 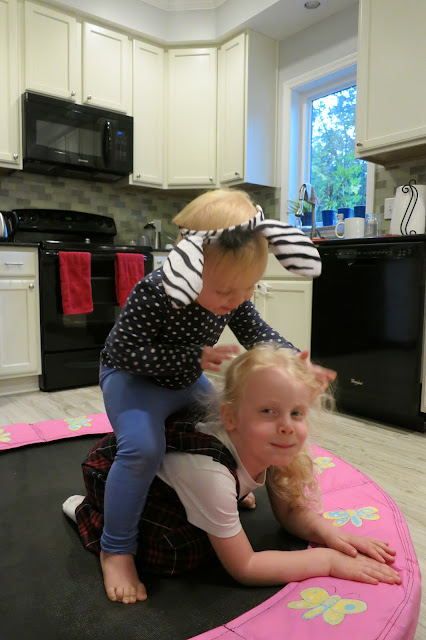 [Not entirely sure what's going on here] 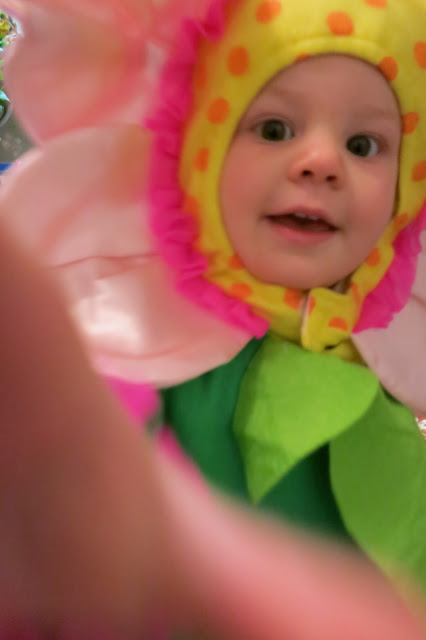