In looking through my pictures from January, I was most struck by the apparent differences in weather over the course of the month, so I'll start there for my recap of Audra's 23rd month :)

Early January was unseasonably warm, so we went out to see an ice sculpture competition... when it was 50 degrees out. Not that I'm complaining that we weren't freezing as we walked around, it was just a little strange, and I imagine it made it a little more difficult to make ice sculptures when the ice is melting that much faster. Audra loves ice, so she especially had fun... and we probably shouldn't have been too surprised when she licked the ice snowman right after I took the picture below ;) 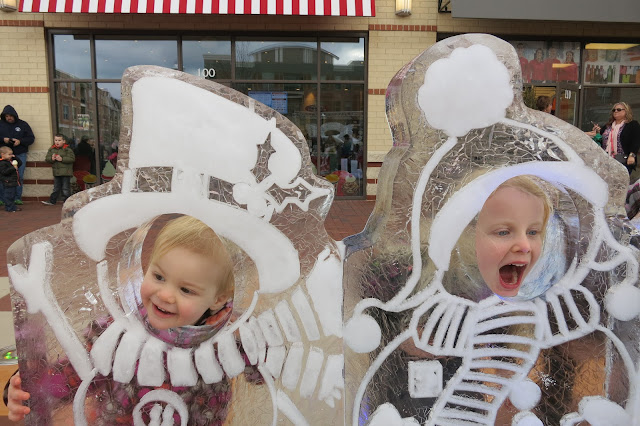 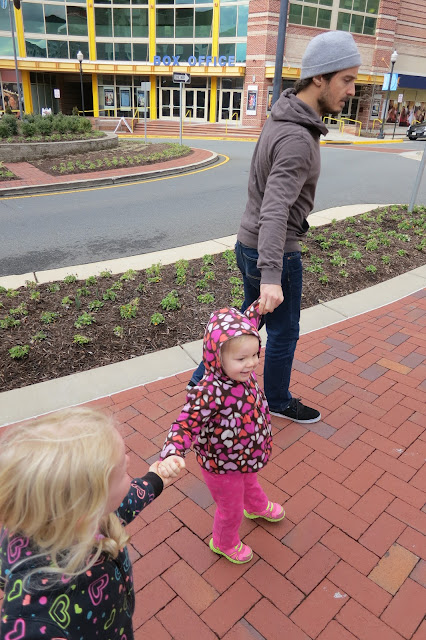 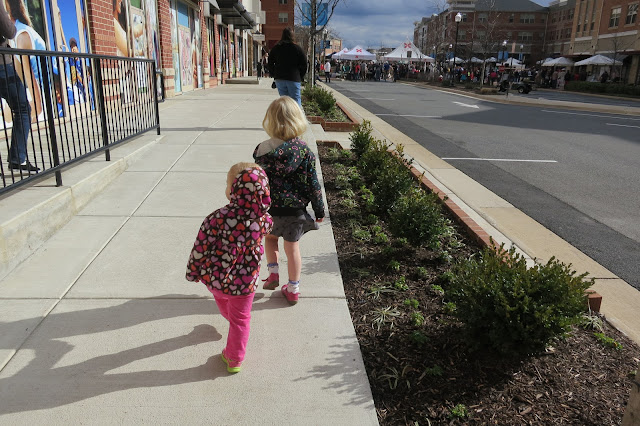 And then came the snow: the next weekend, we had a snowstorm... and not just any snowstorm, but one that broke the total snowfall records for our area. We were housebound for days, and got very well-practiced with suiting up to go outside :) 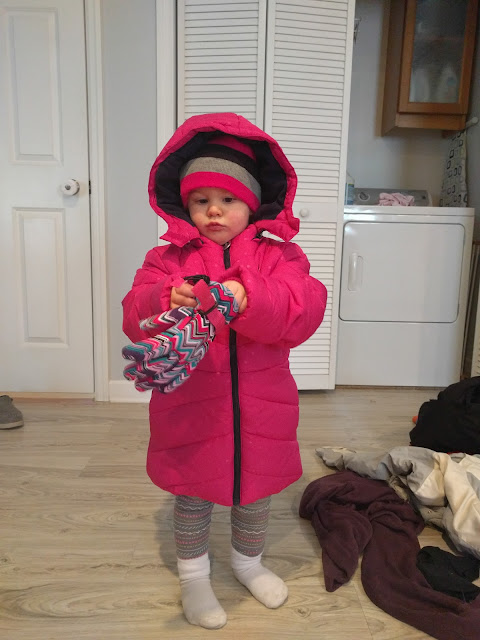 [These are not Audra's clothes] 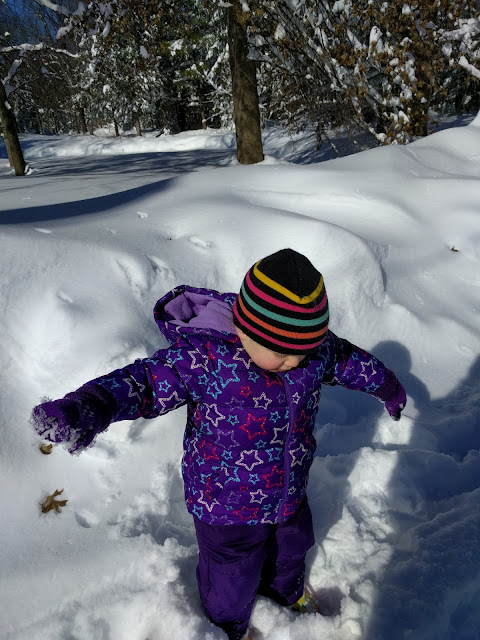 Audra was excited about the snow at first, but then got very upset about being cold (which is pretty much how I feel about snow too). She did like making snow angels, though, which was hilarious to see her just drop wherever she was standing, flail around on the ground a bit, and then destroy whatever angel-like creation she had made when she tried to stand back up while hampered by all her puffy layers of clothes. She also liked the snow just fine when I was carrying her around (yelling "big snow!" or "birdie!" in my ear almost the whole time), and liked it even better once it started melting and created lots of slushy puddles for stomping in ;) 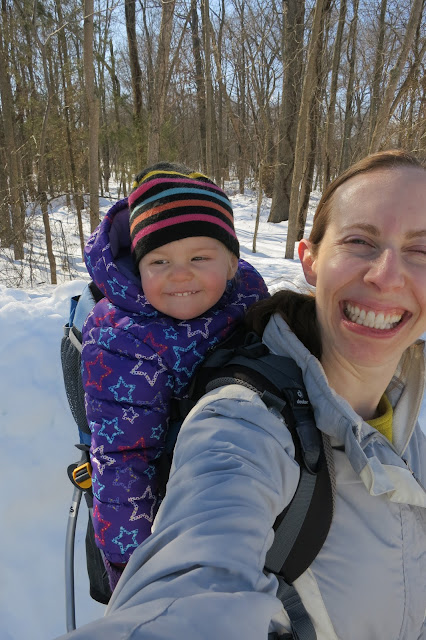 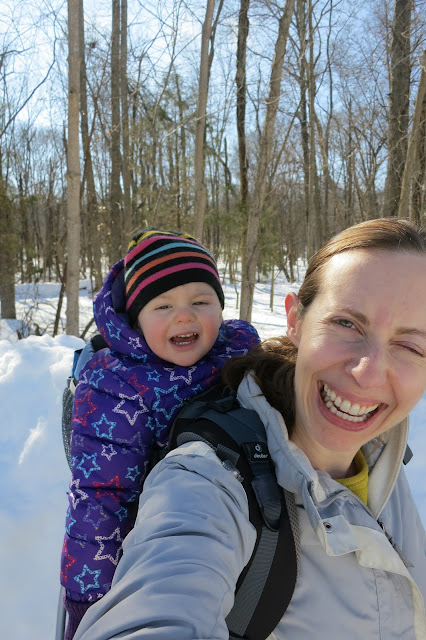 Audra came down with a cold while we were all at home, so she got an extra day home with us even after her daycare was open again. Before that, she had actually slept through the night a couple of nights in a row, but with all of her coughing and congestion, she ended up waking up a lot again overnight. She was in fairly good spirits despite looking pretty rough, but she didn't have much of an appetite, and her naps were a little hit-or-miss. One time she had troubles falling asleep (only falling asleep once she had worn herself out more, then come back to bed and held hands with me), and another time she fell asleep very quickly and slept for a couple of hours before waking up happy... but getting scared (understandably so) by Ryan talking to us through the video camera in her room, so she threw herself onto me and promptly fell back asleep for another hour and a half.

She also had her first (and hopefully last) experience with nursemaid's elbow. We had made it this far without her having any issues with this like Josie did, but Audra tried to make a break for it while crossing the street with Ryan and he didn't let go... so, yeah. She wasn't able to use her right arm at all, so we immediately packed everyone back up in the car and headed straight over to urgent care. Poor thing was so upset and hurting, and just cried the whole time we were there (even while nursing). The doctor couldn't even tell if her manipulations had fixed Audra's arm since she was still so upset, so we had to stay for a while longer to make sure she was ok before we were cleared to go. Audra still wouldn't use her arm, but then I apparently hit upon the proper motivation for her: I asked her to go get me a tissue (I was crying too), and she hopped right up, used her right arm to grab the tissue, and immediately perked up again once she realized she wasn't hurting :)

We then had an impromptu picnic in the lobby of the building where the urgent care office is, since we had been attempting to get lunch before we took our detour to urgent care. Audra was still coming off her cold at that point and didn't have much of an appetite, but she ate a little bit and had fun playing hide and seek with Josie :) There are a couple of restaurants that both girls consistently eat really well at that we deploy as needed if they haven't had a good eating weekend. Sushi is one of them, and Eggspectations is one of the others (which is where we had been trying to go when Audra's elbow got hurt), so we did sushi that night instead, and it worked like a charm - she finally ate well for the first time in several days ;) Audra and I also went out for lunch with just the two of us, and had a perfectly lovely time together... although she was quite messy by time she was done. 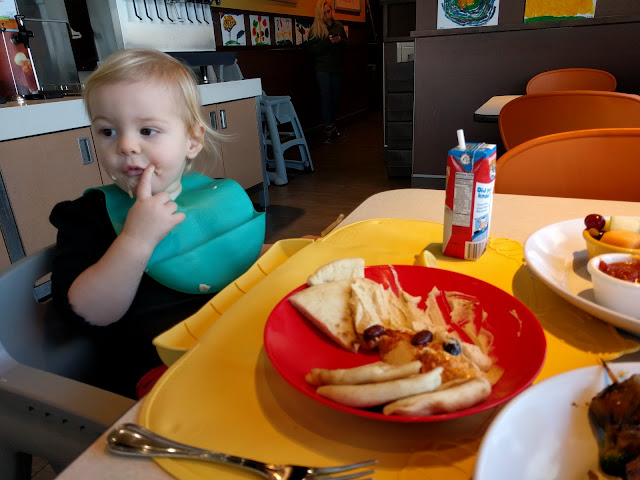 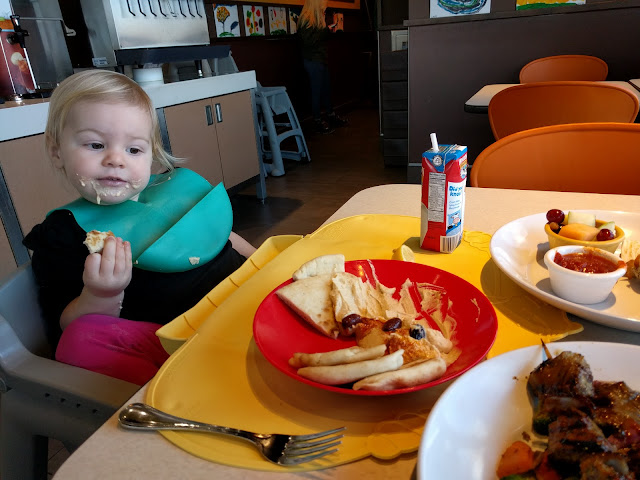 Audra has been even more communicative, and it's astonishing how observant she seems to be and how well she is able to articulate her thoughts already. She said "hold neck, booboo" when she saw me holding my neck, "bite shower" when she pretended her fish was biting the shower curtain, "pool cue down", "'puter down, here [pats couch next to her]" when she wants us to stop whatever we're doing and play with her already. She also loves being tickled, and regularly asks for that ("tickah me!"), which I just don't get. Every color (and the act of coloring) is currently "yellow", and pool is known as "yellow ball", which she quite likes since she helps Ryan by putting the balls back on the table for him (except the cue ball is known as "not that one!"). Her numbers are still pretty jumbled, but she fairly consistently will say a set of them together ("one, two, three" or "six, seven, eight").
Audra also seems to understand the concept of rooms, since she can identify the kitchen, Audra's room, and Josie's room. She also seems to recognize emotions ("baby crying, baby sad"), and gets concerned whenever Josie's crying. Audra actually answers questions too ("Is the baby sad or happy?" "Baby sad," while looking at a picture of a crying baby), although the answer to yes/no questions is almost always "no", even when "yes" would be in her best interests ;)

Speaking of "no", Audra has been feeling her emotions more lately... this a rather euphemistic way of saying that her tantrums are intensifying. I imagine her two- and three-year-old years will be rather challenging, at this rate ;) She has always seemed to feel the emotional extremes more, laughing so hard at the things she finds funny (like when we touched fingers and I jumped) and screaming so hard about the things that upset her (like when I told her to stay in her room for bedtime). She also apparently holds grudges now, since Ryan wouldn't let her onto the bag with her milk in it for daycare on the way to the car... they then drove all the way to daycare, and she still wouldn't look at him or say good-bye when he dropped her off.

She tests her limits like no other (as she should be!), with my favorite being when she repeated "No drink bubbles, Audra" after me, and then locked eyes with me while she drank soapy water... which, by the expression on her face, I think she won't be doing again too soon ;) She also tells on herself and others now, telling Ryan "Mommy hit light" when I accidentally hit a lamp, or "Audra broke it" when Ryan was talking about the cabinet door that the girls broke in an overly-enthusiastic game of hide and seek in the cabinet where we normally keep our trash (sigh). Ryan also nudged her out of the way when she was blocking a cabinet once, and now every time she gets upset, she says "Daddy hit Audra!" And if I respond "Daddy didn't actually hit you", she moves on down the line: "Mommy hit!" "No, Mommy didn't hit you." "Josie hit!" "That's true, but not this time."

As for me, I finally stopped pumping at work. I was down to only pumping once a day anyway so I thought it wouldn't be much of a transition, but I'm still feeling strangely sad about it and a bit unmoored without that break built into each day. Then again, it is nice to be able to work uninterrupted (by that, at least), and so we'll just see how things go with continuing to nurse just when we're at home together now. 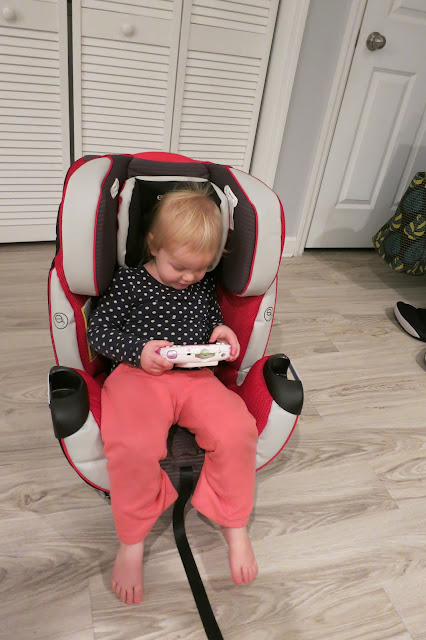 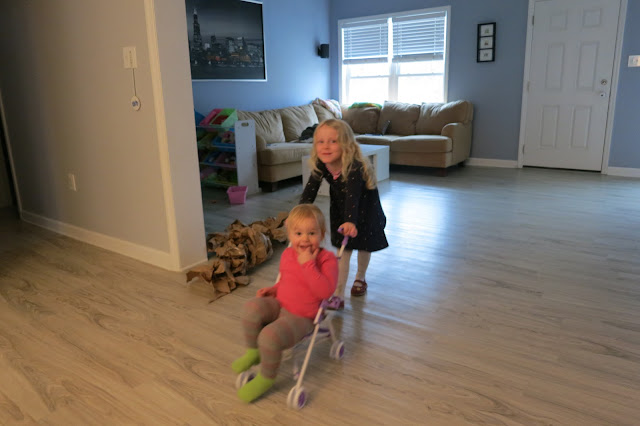 [Audra is definitely too big for her doll stroller] 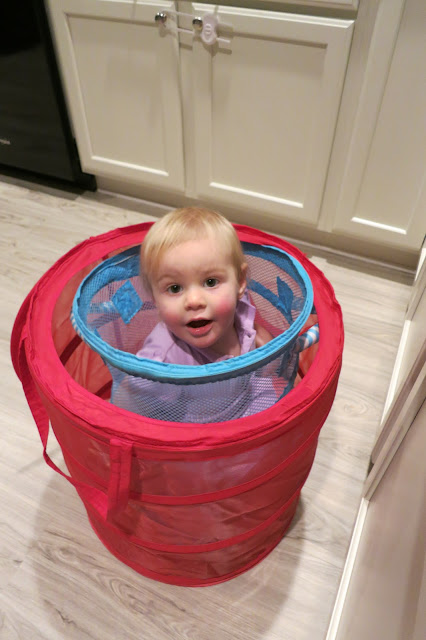 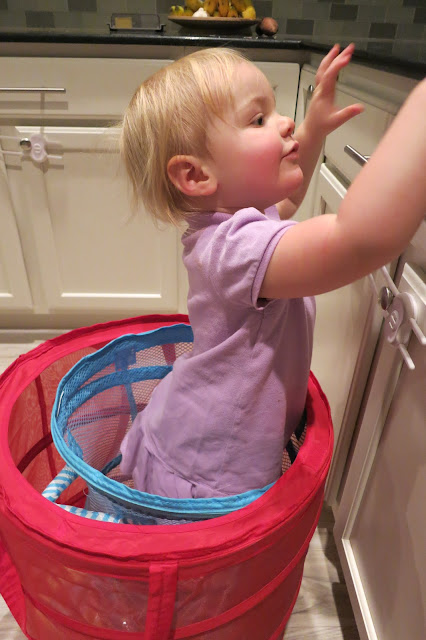 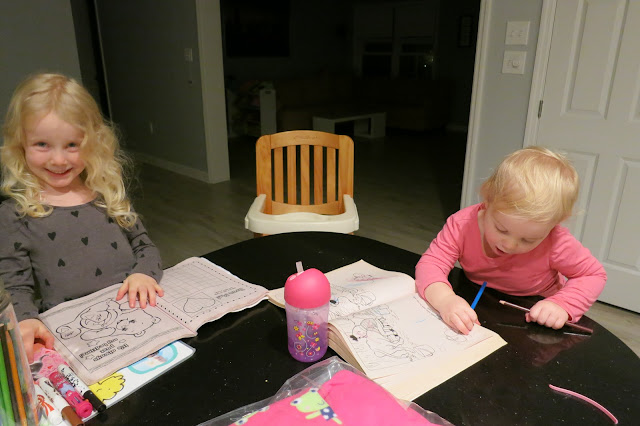 [Pretending to be a baby cat? And then scared of a dirtbug]
at 5:04 PM