Despite my last post being presented as a recap of our October activities, I apparently had a memory lapse about, oh, most of our month. So here is the rest :)

We started off the month with a trip to a pumpkin patch (which Josie then went to again the very next day as a school field trip, and apparently had just as much fun there that time too). Audra was pretty much keeping up with Josie this year, while Benjamin got to play around much more than last year too, especially liking all of the full-size wooden vehicles. 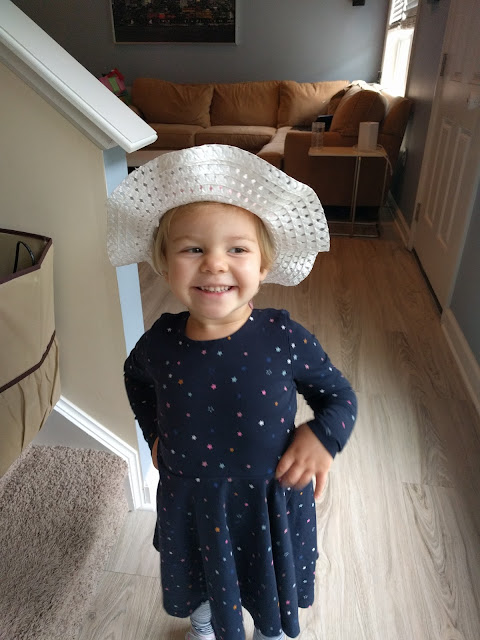 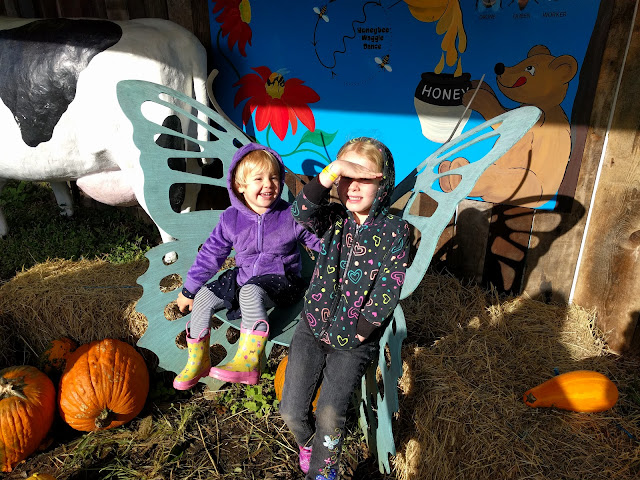 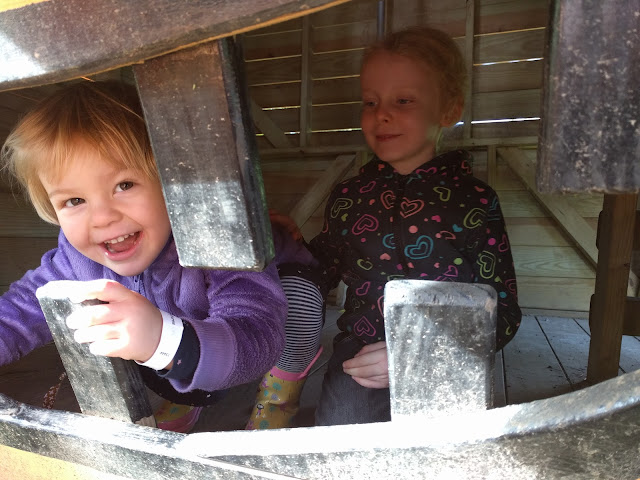 [Inside the mouth of a jack o' lantern] 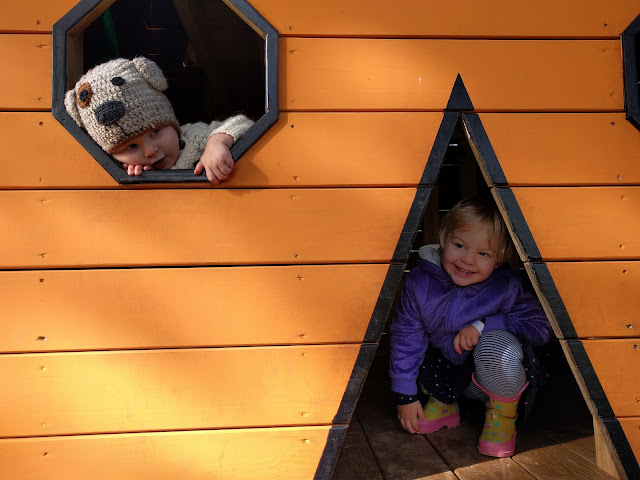 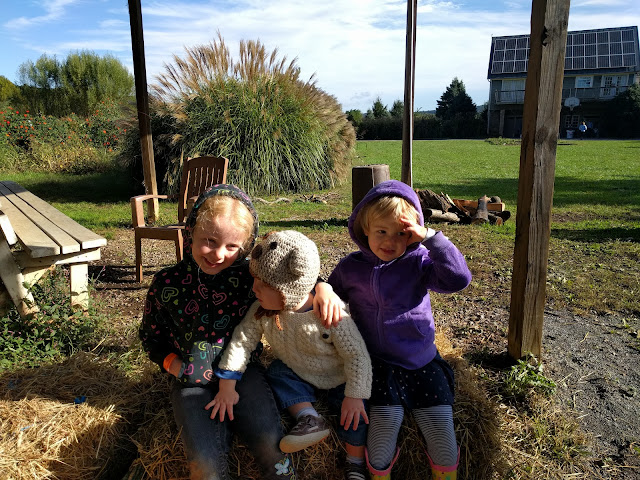 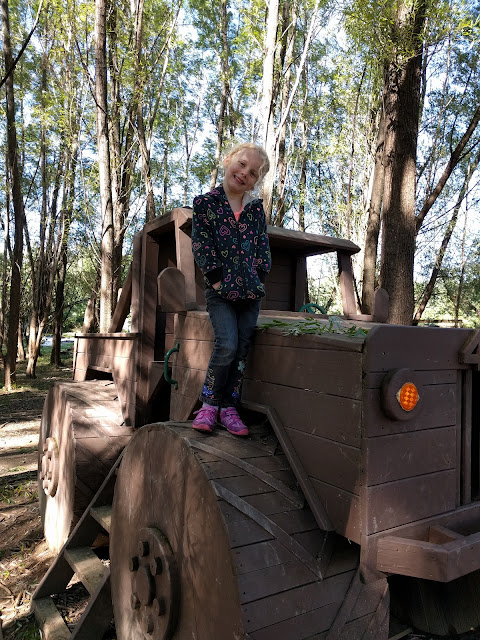 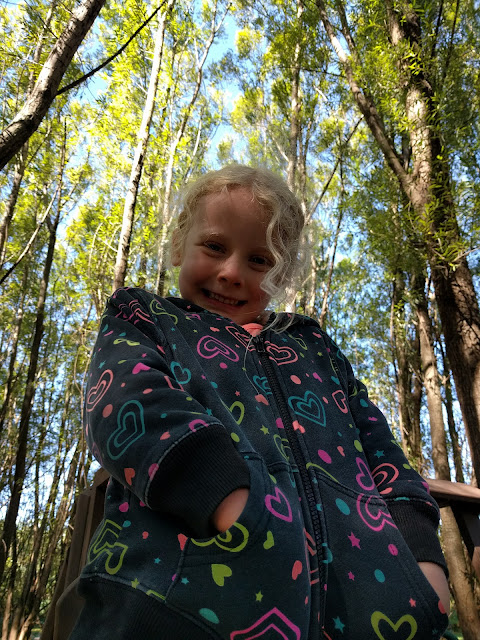 The girls especially liked a fort that had a climbing wall-type thing in it to get up to the upper level, which then had a slide coming off it to get back down to ground level. With my mom stationed in the fort to boost the girls up the climbing wall, and me at the bottom of the slide to make sure they made it down in one piece, they had a great time running around the fort, getting up to the slide, and then coming back down... over and over and over again.

They also both went on the giant jumping pillow (again, requiring helpful boosts from the adults to get up it), although Josie in particular quickly realized that the hordes of kids running back and forth past her were not her cup of tea, since they kept inadvertently double-bouncing her and sending her sprawling. So she chose to regard the giant jumping pillow as a giant sitting pillow instead ;) 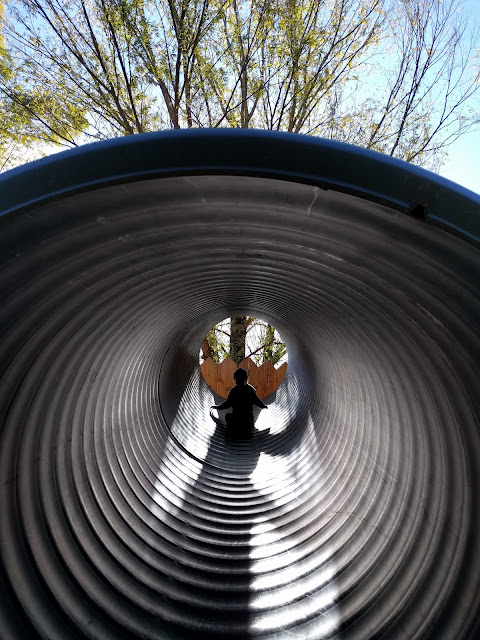 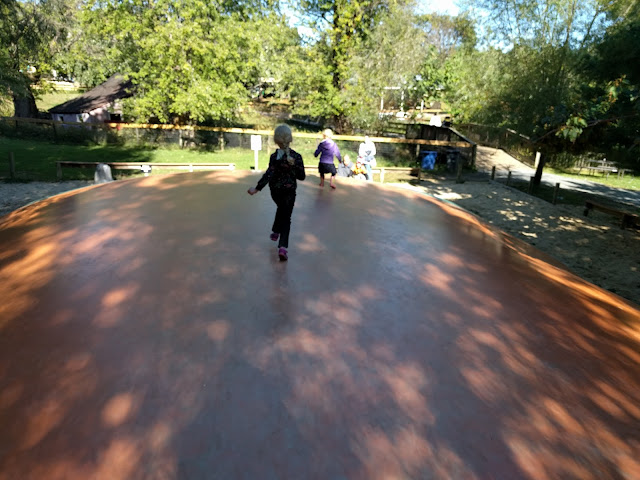 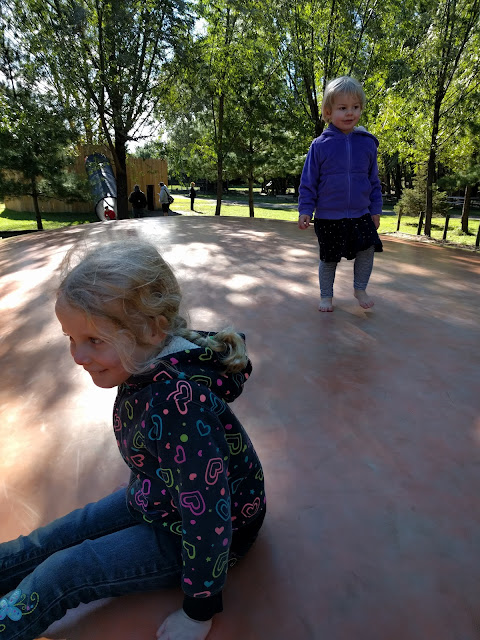 [Not pictured here: hordes of children]

After the trip to the pumpkin patch, I figured we were done with fall festival-related activities for the year... until I randomly stumbled upon a notice about a fall festival at Mount Vernon. I have fond memories of Mount Vernon, although it had been years since I was last there (and that was for a winter festival, I believe), so I figured we'd give it a try. Emily and the younger kids skipped the mansion tour, but Josie actually did pretty well with it... although she seemed most interested in seeing the bed where George Washington died (she is a tad bit morbid).

We then wandered around the grounds, eventually heading over to the Pioneer Farm where the festival was. Josie helped do laundry, we watched some grain being treaded in the 16-sided barn, pet some horses, listened to some story-telling (which were mostly Aesop's Fables, so Josie was especially excited to hear them, since that's what we're reading at home right now), did a hay bale maze, carded wool, milled some grain, and finished it off with hot dogs and listening to some fiddling. 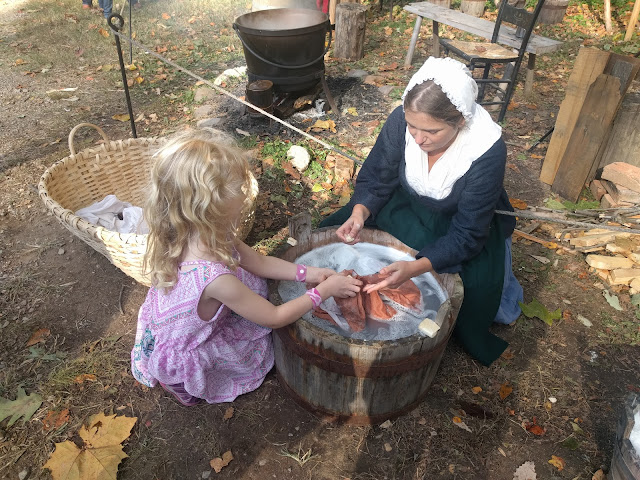 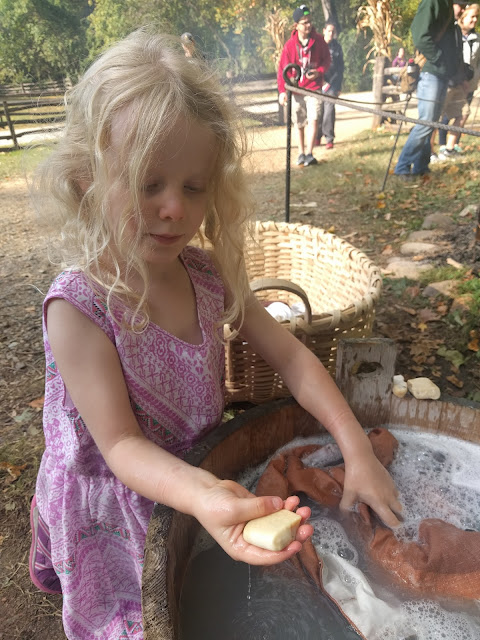 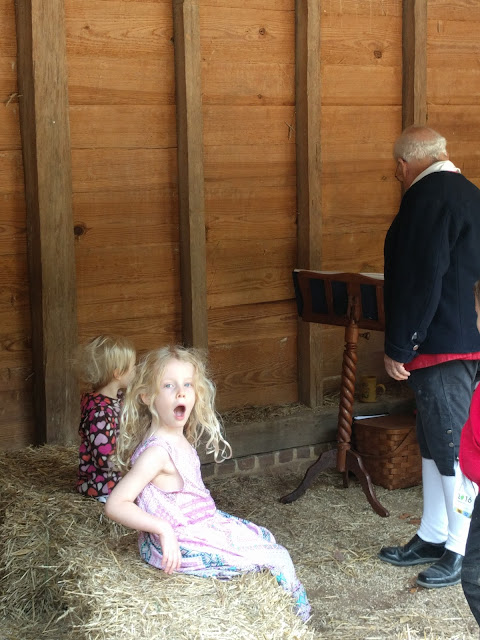 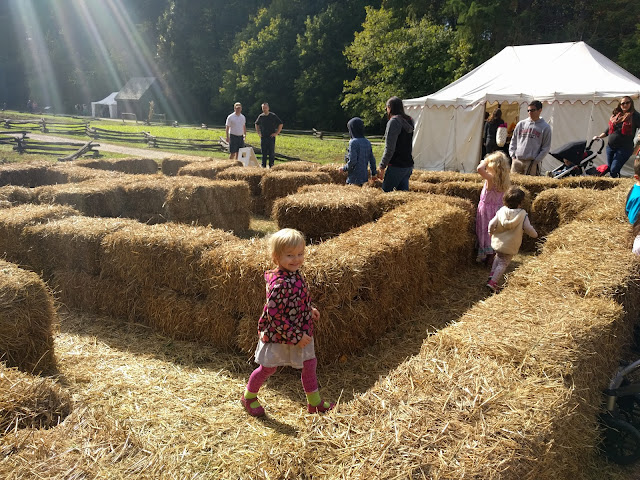 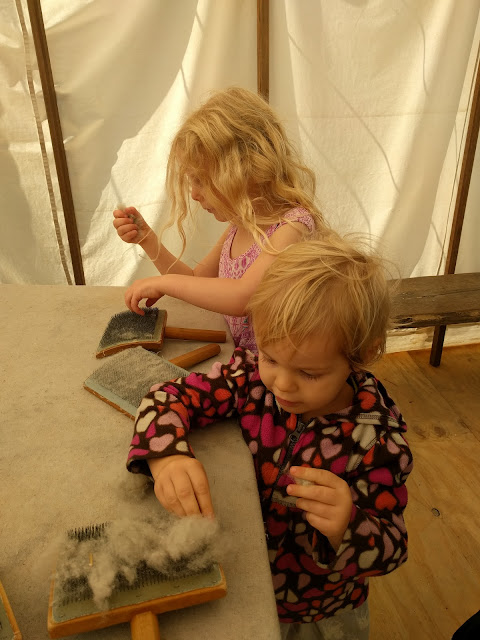 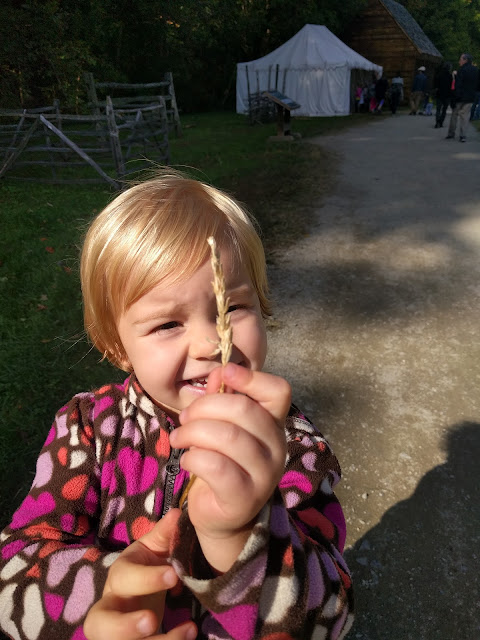 [Audra's treasured bit of wheat, which she received to distract her from tantruming when I finally dragged her away from the wool carding/grain milling tent] 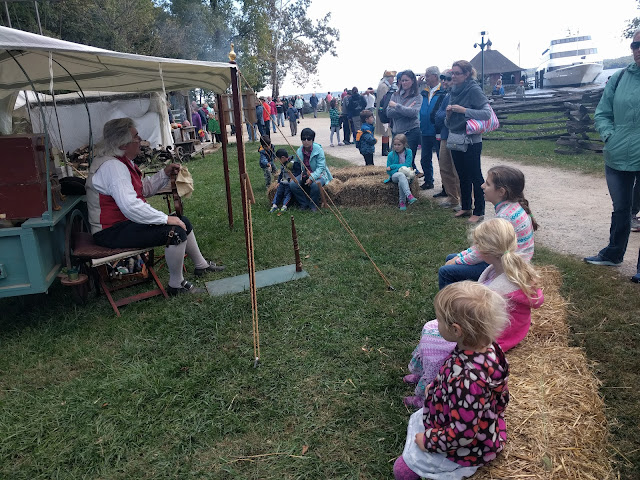 Now that we really and truly were done with fall festivals, we could turn our attention to... pumpkins. I risked it by having just Audra with me when we picked out pumpkins, but it only led to some whining from Josie and mildly heated negotiations between the kids for them to settle on which pumpkin was whose. As we were picking out designs, I reminded Josie of what happened last year (when she picked a scary face, which she decided was too scary for her only after I carved it), so instead both girls picked out happy faces for this year. And that is how we ended up with a couple of really happy jack o' lanterns, which made me smile each time I saw them :) 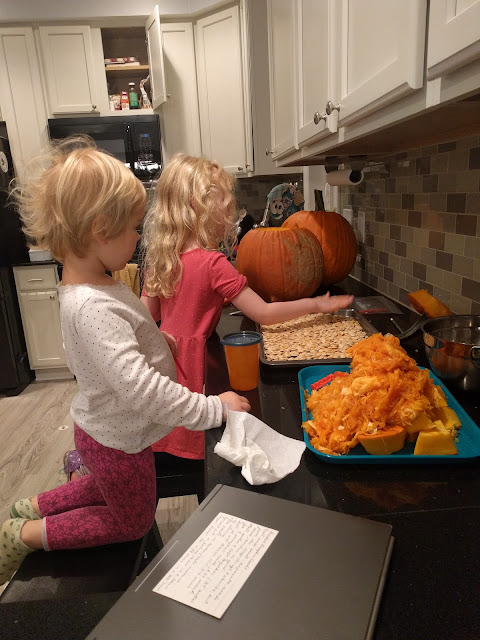 [Preparing the seeds for roasting] 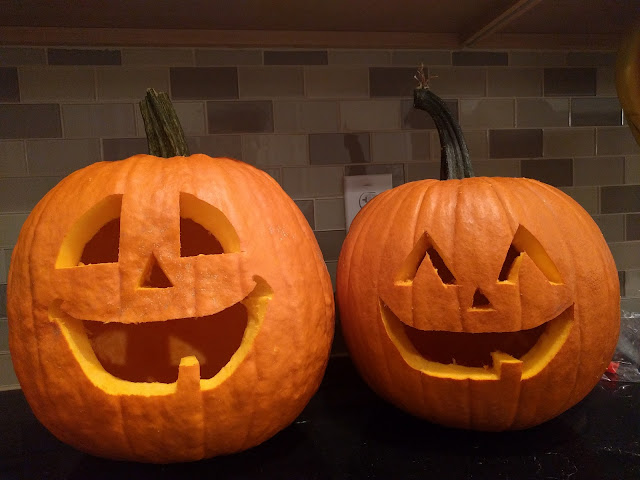 [Audra's on the left, Josie's on the right]

The girls also had a Halloween parade at their school, which is always fun. Audra looked mildly concerned about all the hubbub until she saw us, then her face lit up as she ran over to give hugs, and then she REJOINED THE PARADE. I was shocked by this, since she (still) very rarely willingly leaves my side. But she did well this time :) Josie holding hands with one of her friends was adorable, and seeing/hearing Audra and Josie squeal when they caught sight of each other was also sweet :) 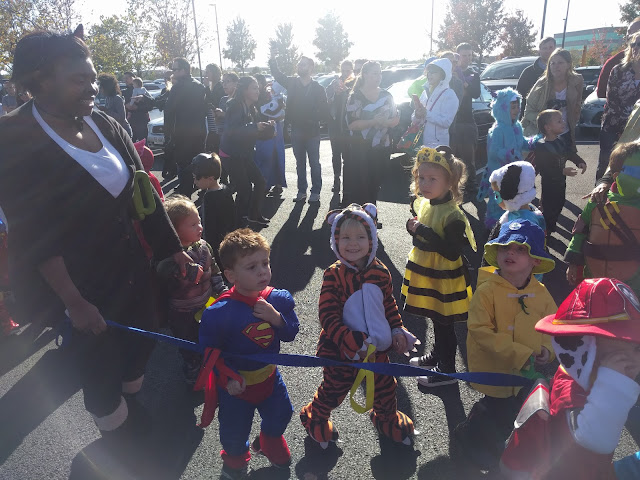 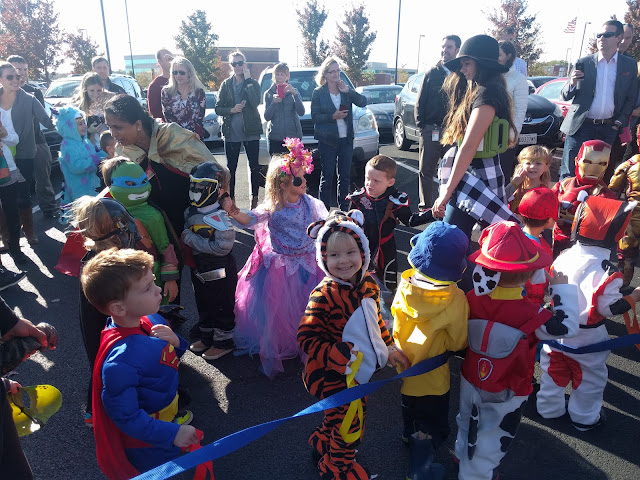 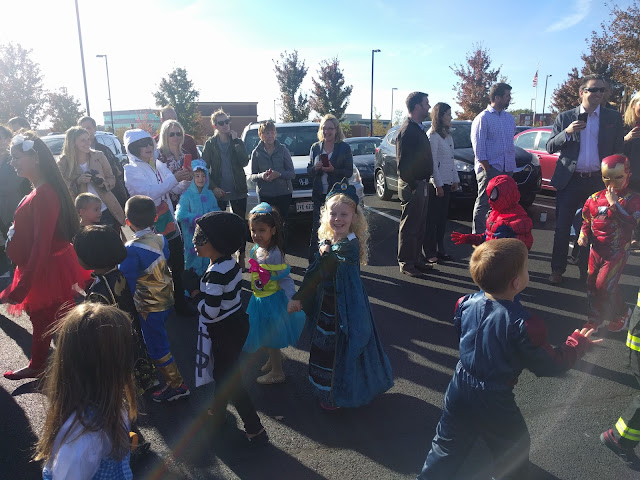 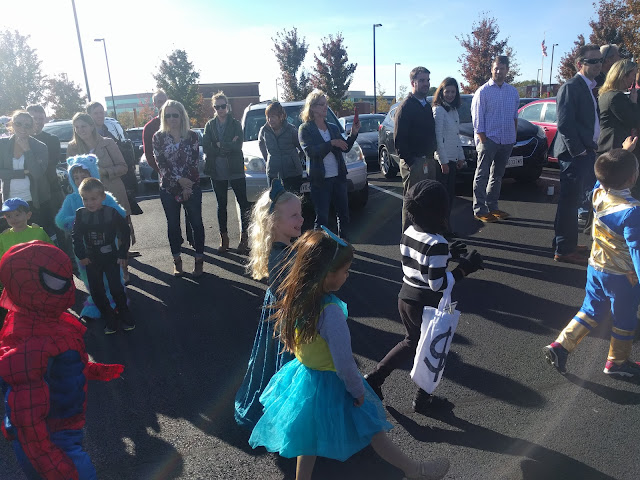 And finally, here are just some random pictures of Audra. She picks her own clothes, and sometimes really knocks it out of the park... or something. This time, she got dressed, then announced "Look at me!" And I responded, "Oh, I see you all right. Go show Daddy." Which is what I say every time she comes up with an especially fabulous outfit, since that just needs to be shared :) 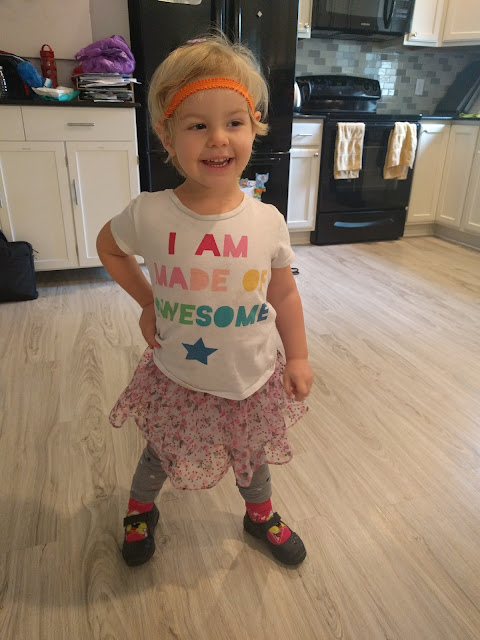 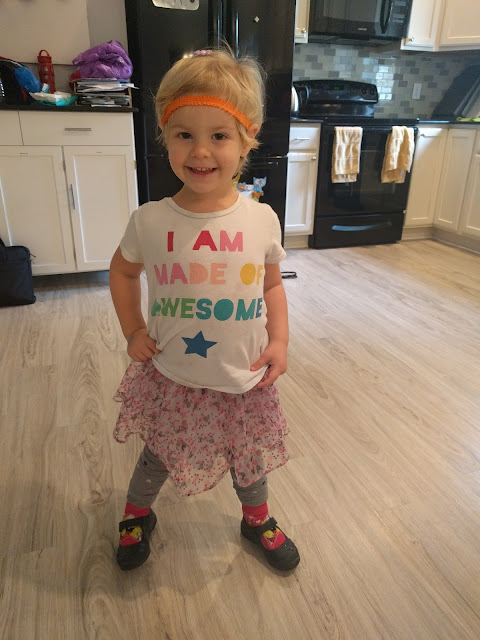