Although it seems we were just there (at least, based on my last post), we headed back up to Pennsylvania a couple of weeks ago for our annual trip to visit our friends. For some reason, I have next to no pictures, but trust that it is beautiful up in the Poconos in the fall :)

The girls had a great time playing with our friends' boys, and most of the weekend was spent with them all running around, crashing into things (ok, that was mostly the boys), and playing OUTSIDE even. We hardly ever seem to get outside at home, so sending the kids outside to play by themselves was very exciting to me... especially since they did not require my presence for once :) So instead, I got to stay inside - where I only spied on them a bit from the window - and read, drank some adult beverages, and had actual grown-up conversations (about school, but still, without the benefit of constant interruptions). We haven't been too successful with making new friends once almost all of our old set of friends basically spread out around the country, so I appreciate it even more when we're able to spend time with good friends of over a decade... and it doesn't hurt that the kids all get along so well too :) 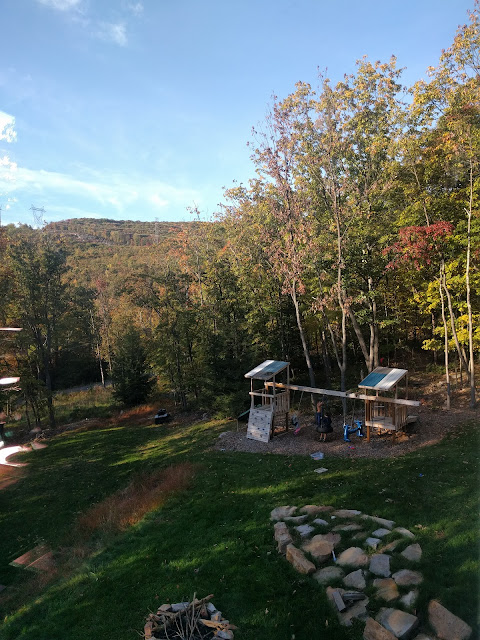 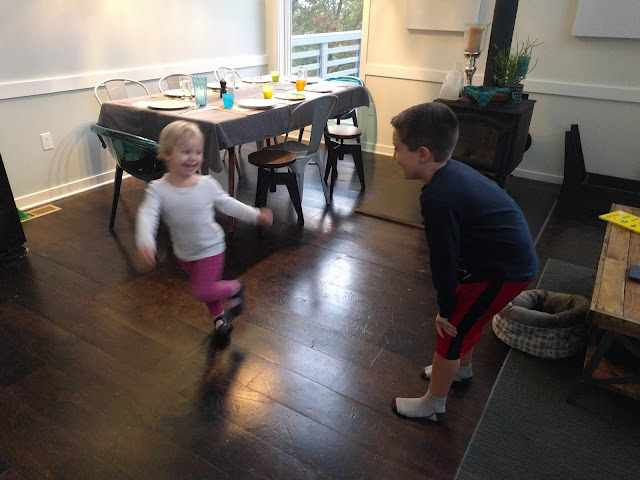 [Blurry children running; this was representative of how the weekend went]

The other big event in October is obviously Halloween. Josie dressed up as what I dubbed "Renaissance Girl" (only later did I realize "Medieval Lady" might have had a better ring to it), and Audra was a tiger. I'm still enjoying the fact that Audra is cool with whatever costume I pull out for her, so we're still working through hand-me-downs... hopefully she doesn't realize too soon that she could actually ask for something else, since it is so much easier this way :) 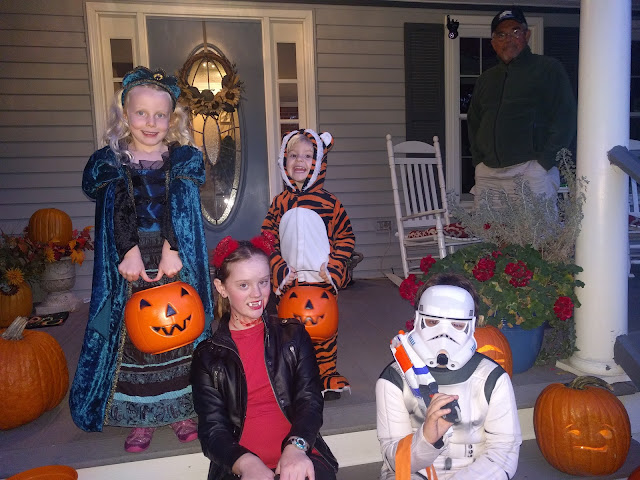 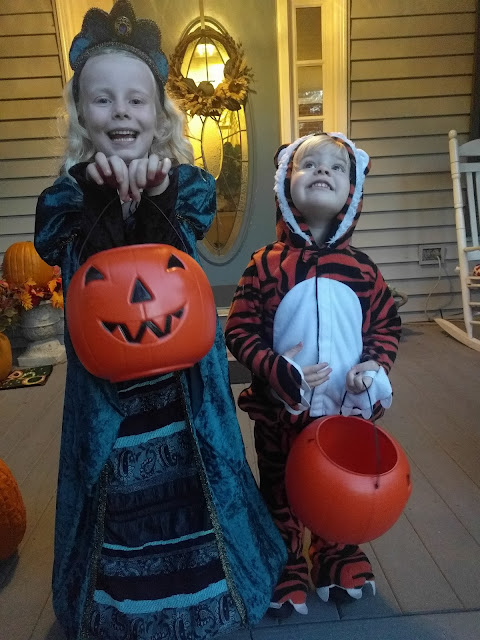 Audra quickly figured out how to work the system: with an adorable little "rawr" or a "Happy Hawwoween!", she was able to roughly double her candy acquisition... and since it's not like a 2.5YO really needs a bucketful of candy, really I was the one to reap the "benefit" of her cuteness ;) Josie was usually one or two houses ahead of us (with Ryan and his parents), so I had her with Audra and me for a couple of houses at the beginning, and then mostly just saw her in passing after that, as she yelled across lawns to us to announce how much further ahead she was. Audra's little legs (and careful and deliberate stair-climbing) meant we had a much more leisurely pace for the evening :) 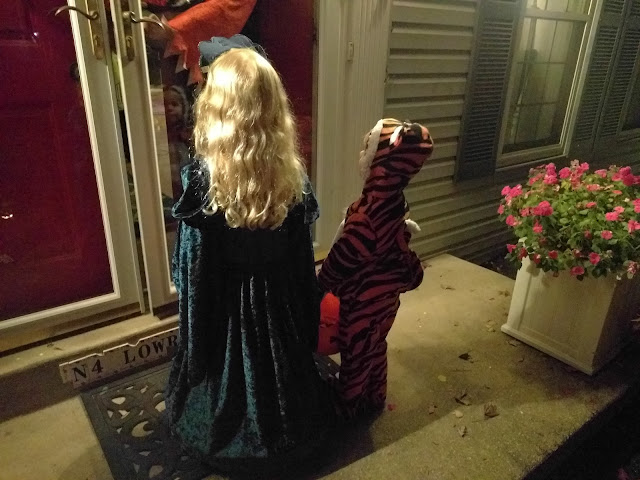 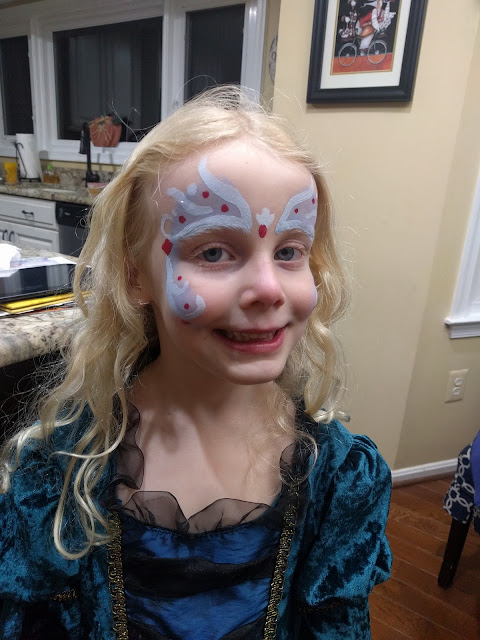 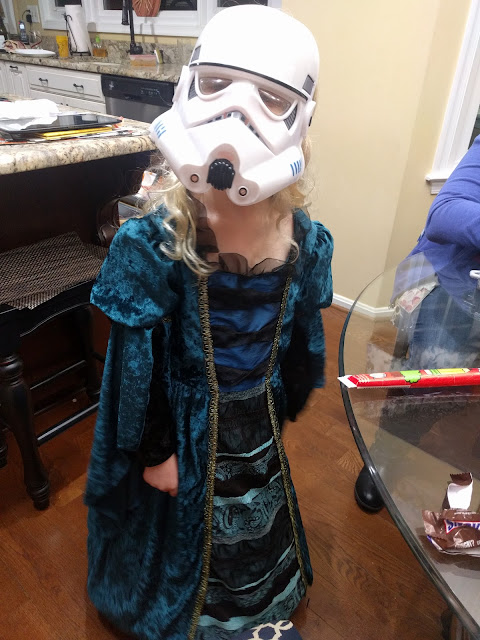 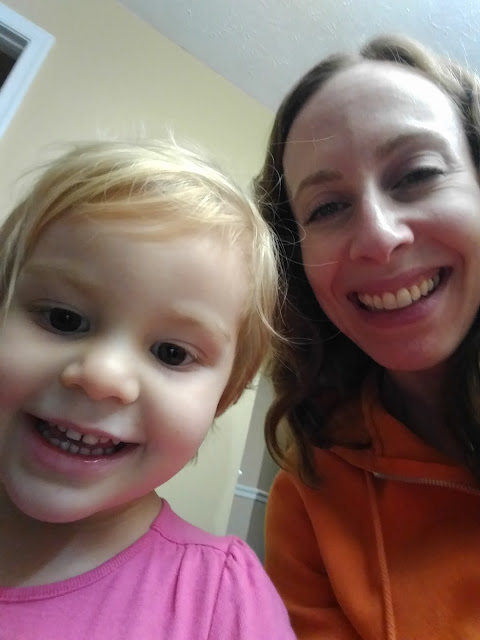