We went up to Michigan in May to visit my family, not at all coincidentally during Tulip Time. I did not appreciate Tulip Time when I still lived in Holland, but have grown to like it more as I've gotten more time and distance between my elementary school days of Dutch costume envy and now, particularly as I'm able to see things anew through my girls' eyes. So, off we went to Michigan for the better part of a week :)

We flew up on a Wednesday (our 11-year anniversary - no better way to celebrate it than to spend it on an airplane with small children ;) ). First up was the Children's Parade on Thursday, which was the kids' first in-person parade. They were mildly perplexed at first, but then got more into it, with Audra dancing around to the bands and Josie helping to watch for my elementary schools' entries. 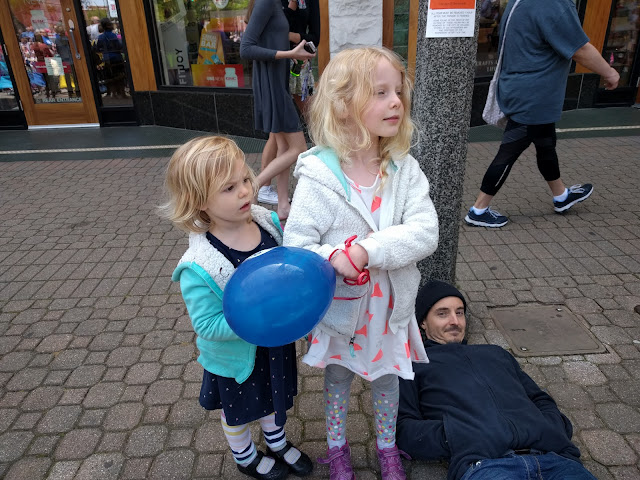 We then stopped at Meijer, like we always do, both so I can visit my first workplace and so the kids could ride Sandy the pony. Audra fell asleep in the car, though, and since we try not to wake her on the rare occasion that she does actually sleep, she missed out this time... 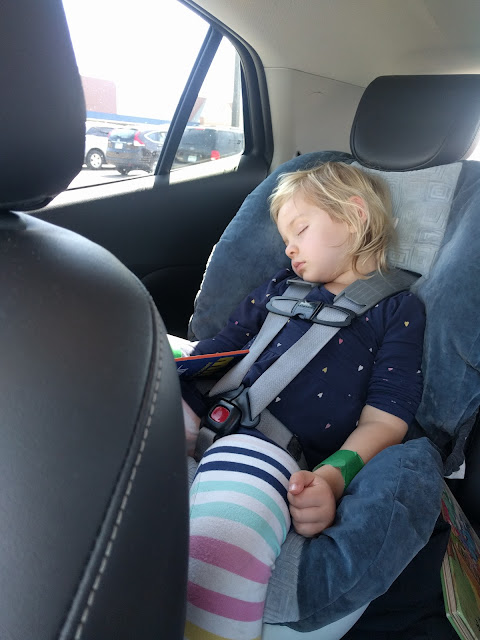 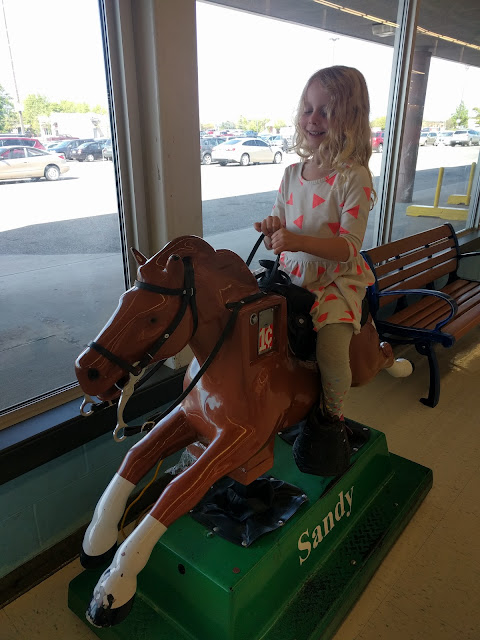 The next day, we headed out on a road trip to Kalamazoo (yes, it does really exist) to go to a brewery... since that's a good kid activity. But if we could go to the actual brewery of some quality craft beer that we've been able to buy from our local grocery store, it seemed we shouldn't pass up the chance. So we had an enjoyable lunch at Bell's Brewery before heading over to the Kalamazoo Valley Museum for some more kid-friendly activities. 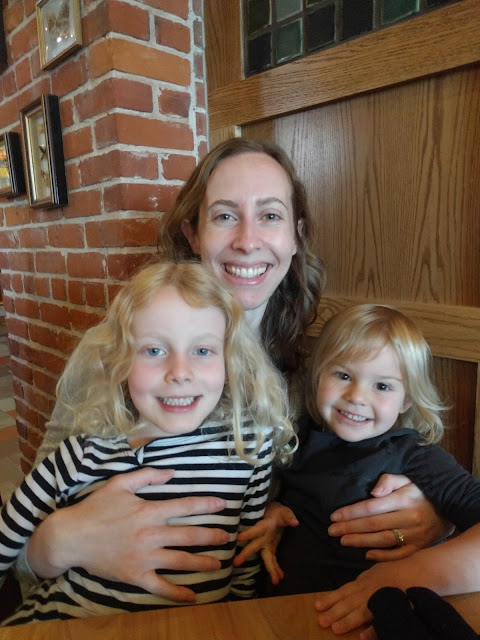 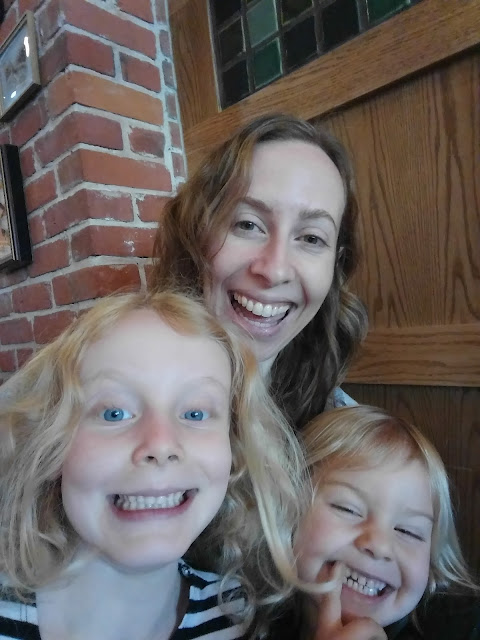 On Saturday, we spent entirely more time than Ryan was cool with wandering around the zoo in Grand Rapids. At least based on the few pictures I took there, Josie seemed perplexed yet again, and Audra made friends with some good-sized lizards. 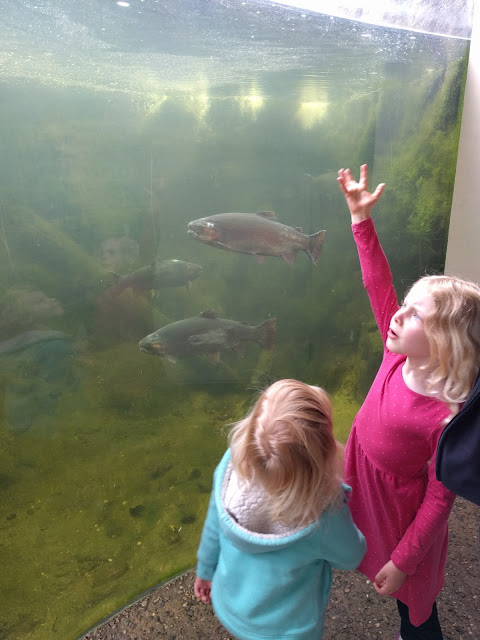 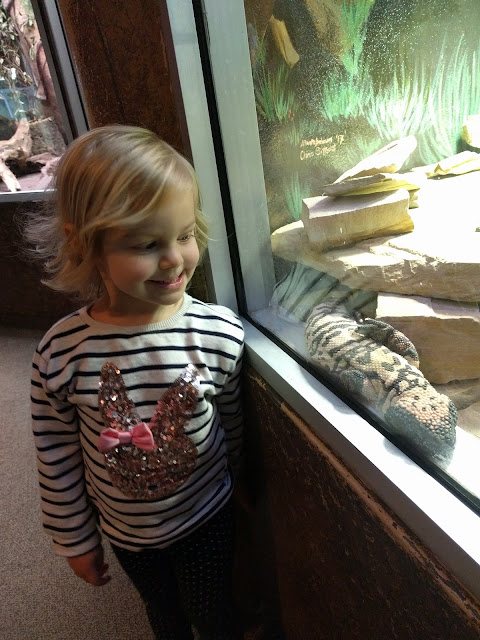 The girls then got to spend time with their cousin Alex, which involved several laps running around my dad and stepmom's house, lots of roaring like deranged lions, and miscellaneous other shenanigans. 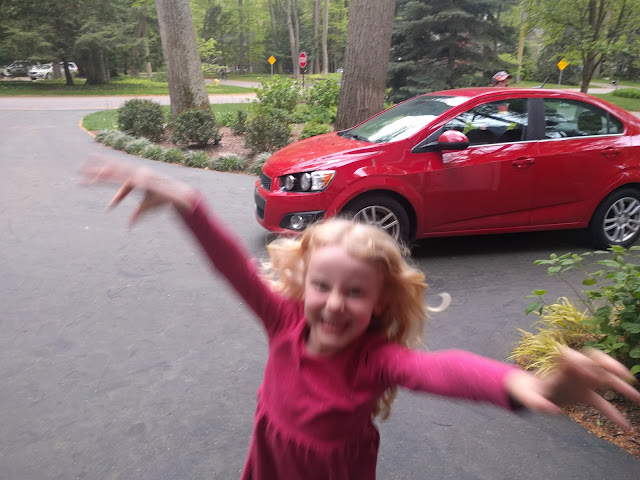 [They were pretty much a blur in real life too] 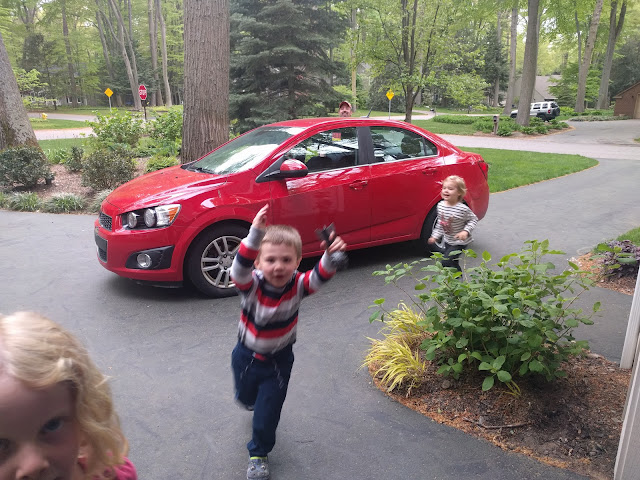 Clearly when kids are already wound up, it's a good idea to give them ice cream directly before bed, so that's what we did. Audra was basically asleep by time we got there, but perked up just enough to eat some ice cream. 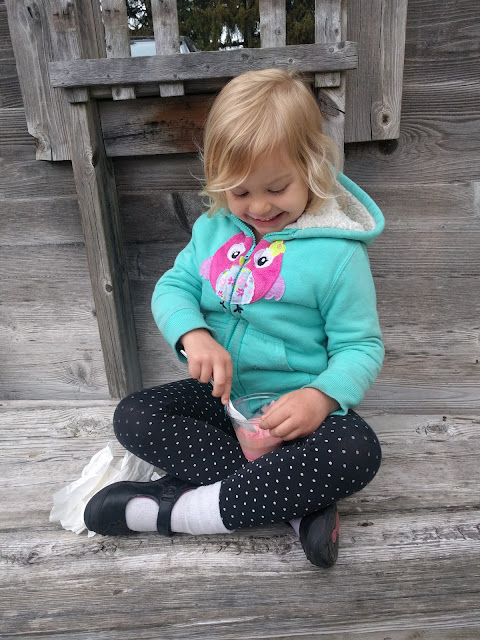 The next day was Mother's Day, so clearly it was time to go to another bar with small children. This time we went to Hop Cat in Grand Rapids, which had a bunch of local beers on tap... and at least we were also not the only ones who thought to go to a bar for Mother's Day brunch ;) 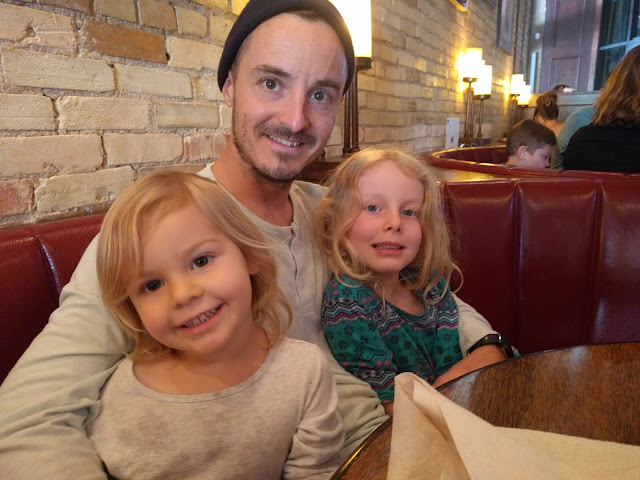 I think this meal was also notable because it was one of the only times one - or both - of the kids did NOT fall off their chairs for a meal on this vacation (although Audra did slide off under the table once). It was really weird just how much more often they seemed to fall off their chairs in Michigan. Is the gravity different there? Is the ground sloped in a way that makes chairs less stable? I don't know, but in one restaurant, they both fell off their chairs within minutes of each other, and in another, I at least managed to catch Audra by the arm so she was left dangling with her face inches from the floor. Very odd.

Anyway, after brunch, we walked over to the Grand Rapids Children's Museum, which I think the kids would have been happy staying at for much longer than we did. There were all sorts of different stations set up to play with bubbles, make magnetic sculptures, play musical instruments, etc., and then downstairs was a little kid version of a grocery store... complete with a Sandy! So Audra got to ride the pony after all and was quite pleased by that. 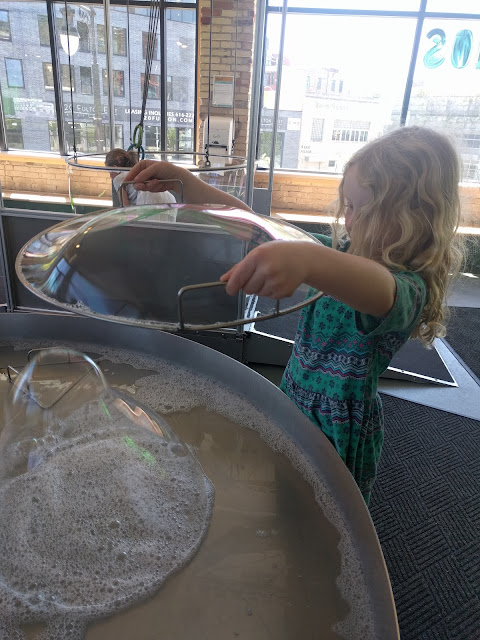 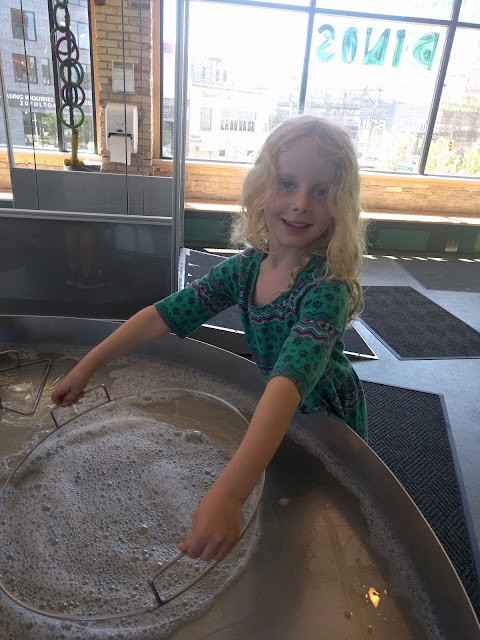 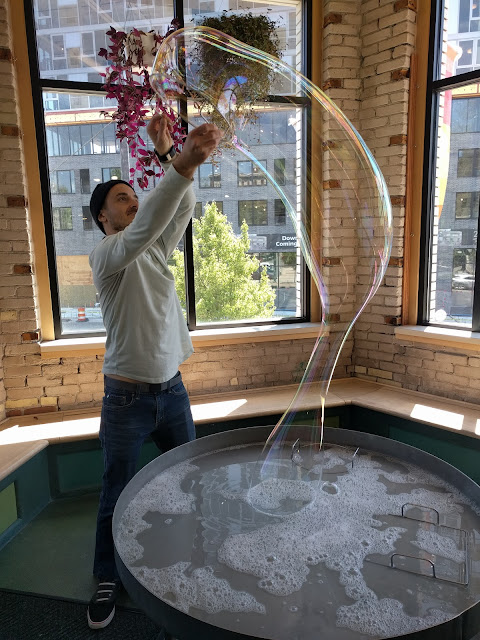 [Ryan got in on the fun too] 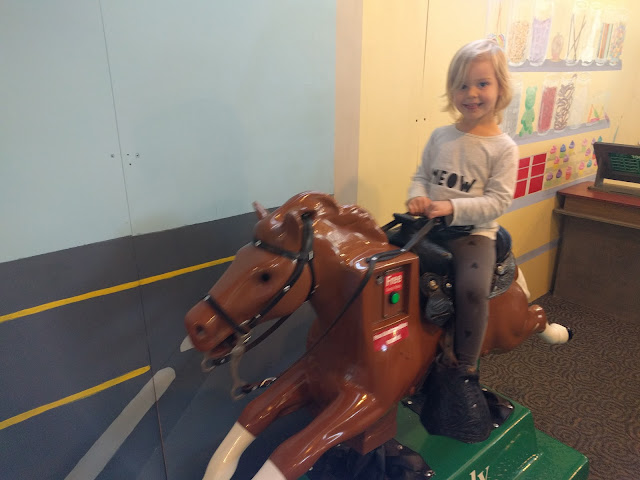 The next day, Monday, was our last full day in Michigan. We went to Tunnel Park so that the kids could see (and climb) a sand dune for the first time. We made it up to the top, where I took some quality pictures of the kids with Lake Michigan as the backdrop, and then immediately climbed back down again so that Josie could run up and down a few more times on her own. 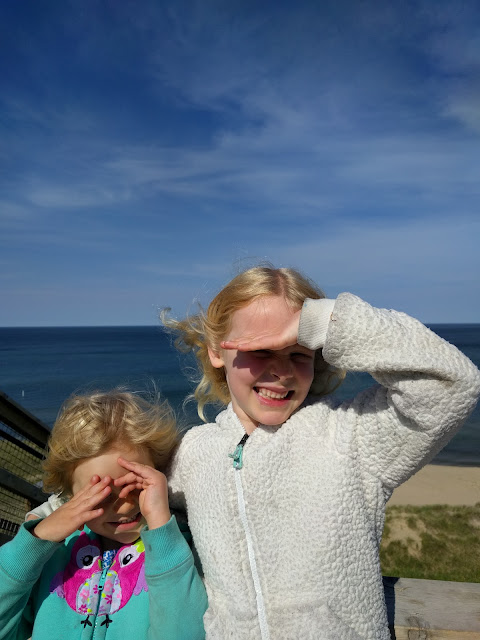 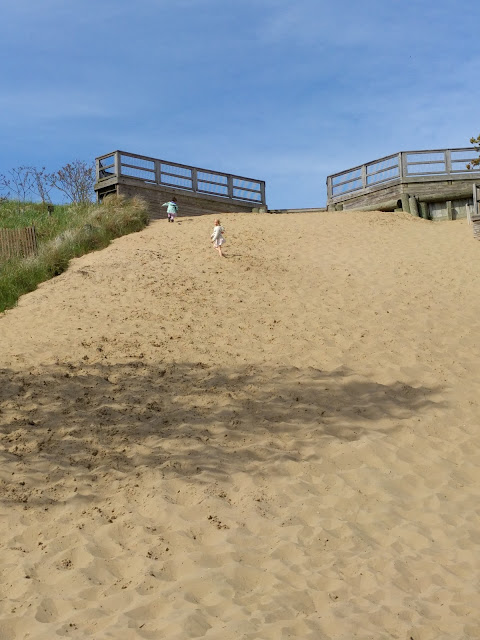 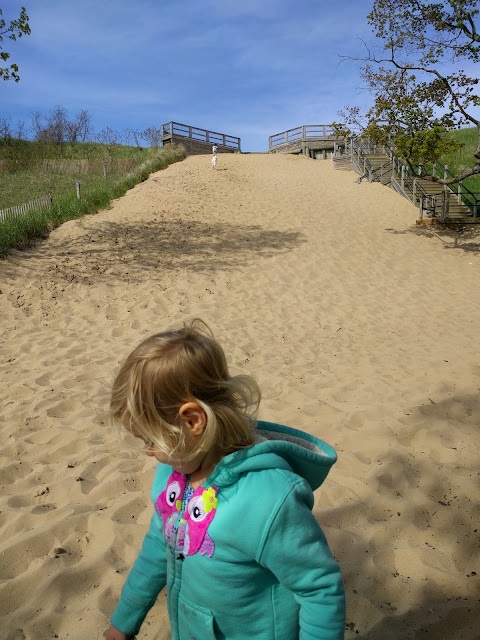 Although we still usually try to put Audra down for a nap at home on the weekends, she still naps at school maybe 2/3 of the time but it's more like 1/10 for home naps. So we just didn't even bother trying for naps since we were out and about so much while on vacation, which worked out ok for the most part, but caught up with Audra a couple of times. For example, the missed pony ride at Meijer, and then Dutch Village, where she basically melted down pretty early on during the day and we just decided it wouldn't be fair to her to not give her an opportunity to nap. So she went back to the house and slept for hours while Josie and I did Dutch Village by ourselves for this trip. Josie wasn't complaining about getting some one-on-one time with me, and luckily was big enough to go on the rides by herself that I can't handle... although I did manage to go on a carousel for the first time in ages without getting too motion sick :) 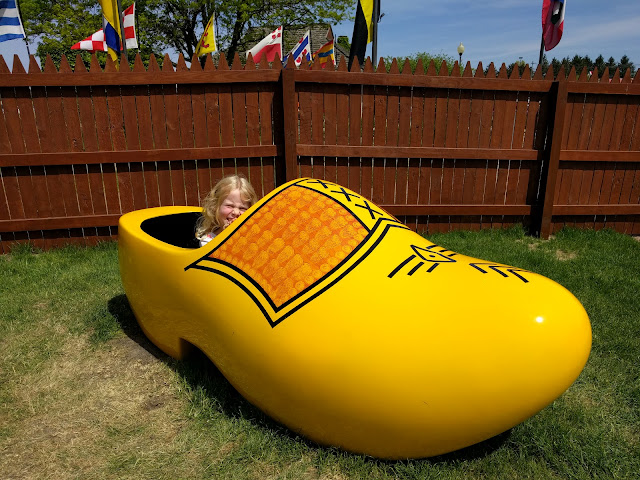 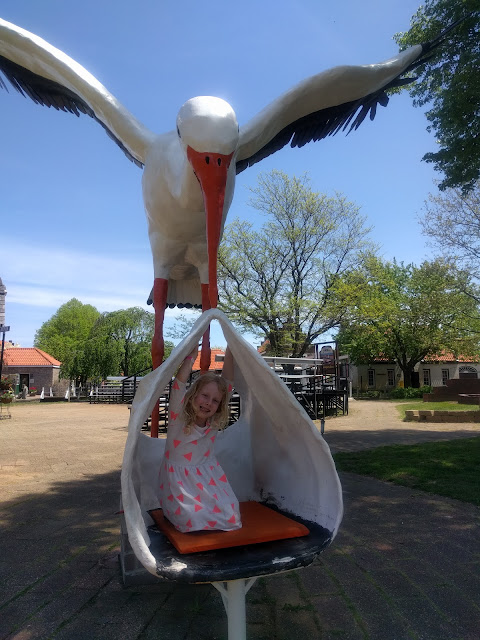 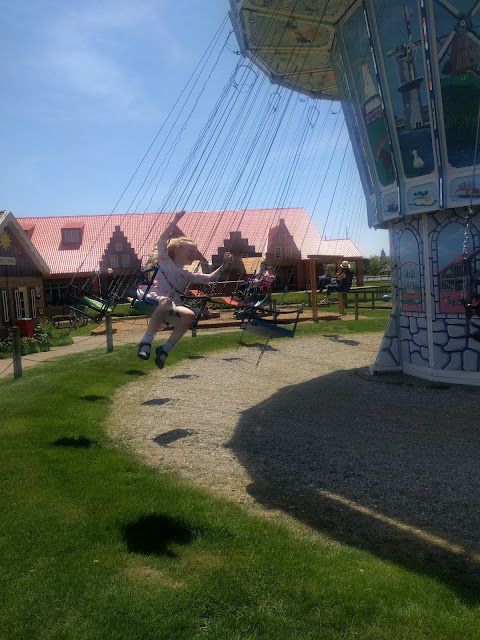 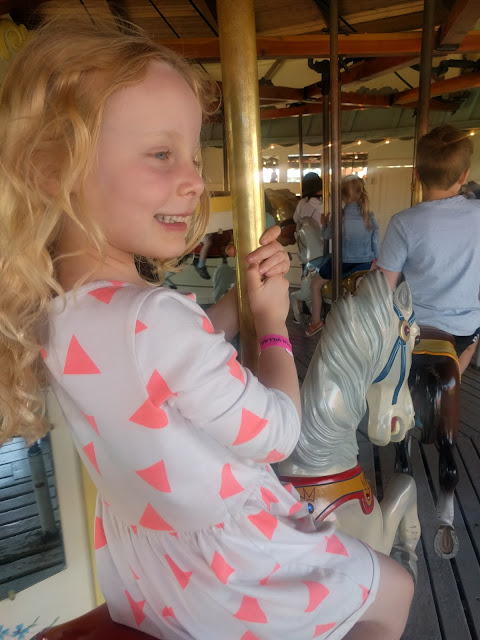 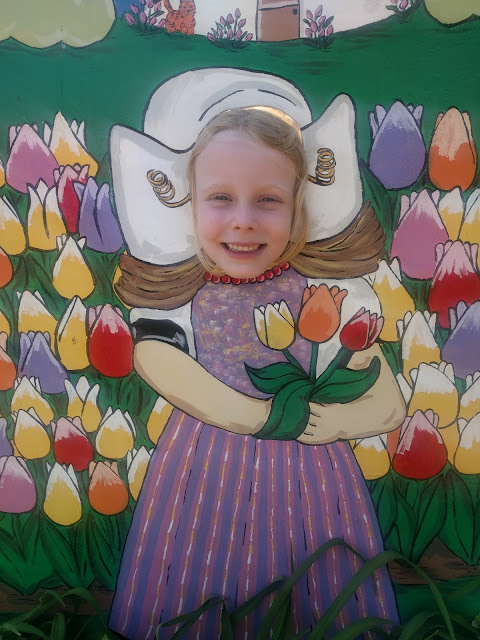 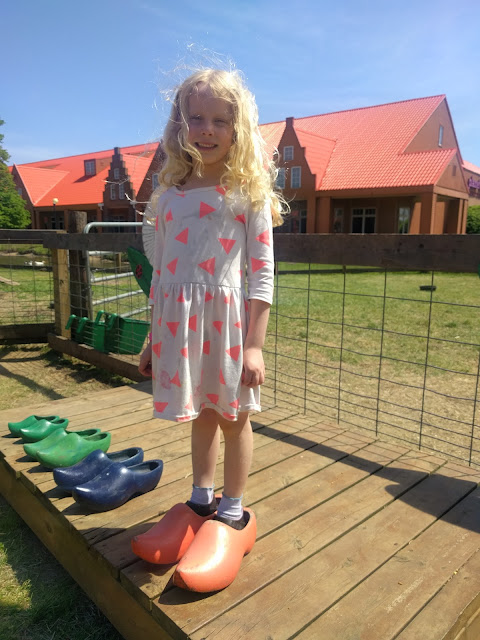 On our last day there, Audra decided to accessorize with multiple headbands (as usual), and spent some quality time doing stickers with Grandpa. Meanwhile, Josie spent every moment possible doing a coloring app on my dad's tablet, so one of her masterpieces is visible in the foreground of the second picture below. 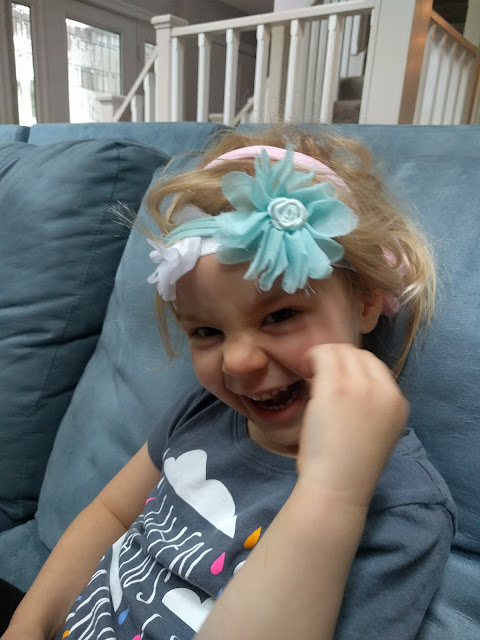 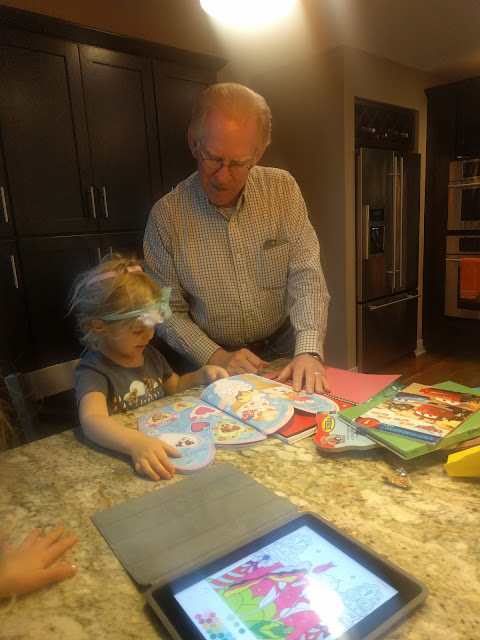 I also apparently took pictures of the first drawing Audra had done of people?? I'm pretty sure she did that at school, so I'm not sure how/why it made the trek to Michigan, but it was cute so here are pictures of it. 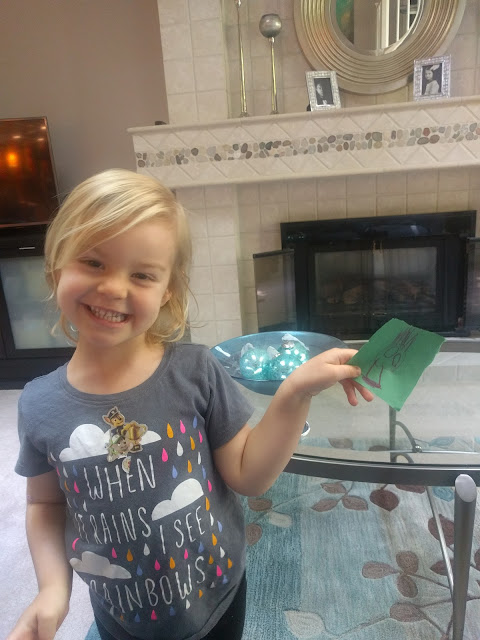 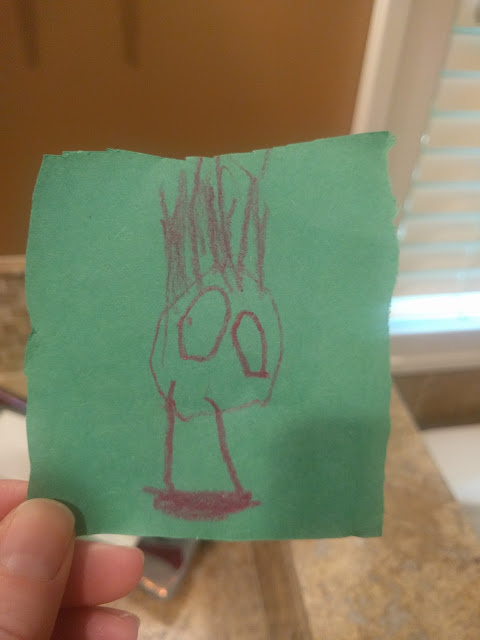 And that was it for our 2017 trip to Michigan! I didn't even talk about the flights, but after all the craziness with United, etc., in the news lately, I was a little nervous to be flying United but was actually pleasantly surprised by it. We were on a little express plane, just three seats across, and it had more comfortable seats and more legroom than any flight I've been on the last few years... and no one threw up from our party this time (and no one got involuntarily dragged off the plane), so that was good too. 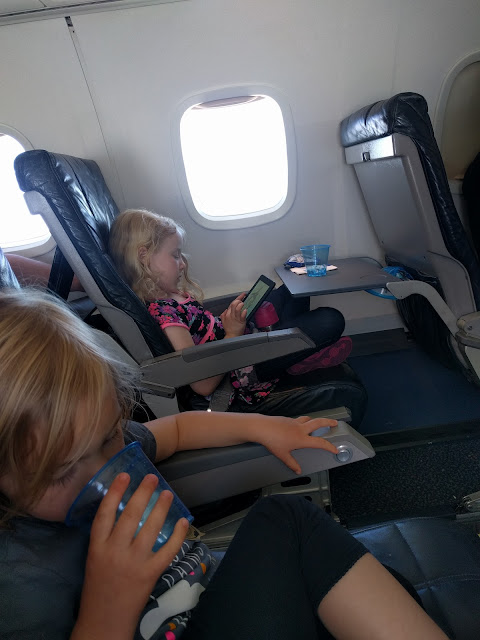