Unfortunately, this week was another low point with sleeping, although we seem to be on an upswing now. Audra finally seemed to be healthy again, so she got the remainder of her 4-month shots last Wednesday. She is up to 20lbs 10.5oz now, and while her ears looked good, she was pretty unhappy with the whole experience and was pretty fussy the rest of the day. That night, she had a lot of troubles sleeping, and woke about every hour overnight, three times just between 2-3am. And then...Audra came down with a cold again. We normally wouldn't give her any vaccines while she was sick to avoid overloading her immune system and increasing any misery for her (and us, by extension). So while we didn't do it intentionally, that's still what happened this time.

So the next few nights, Audra was very congested and coughing a lot overnight, and not only waking up frequently, but waking up UPSET. She was waking repeatedly at the beginning of the night too (when she normally sleeps the most solidly), so I finally just gave up on trying to put her in her crib, and Ryan ended up keeping her in the carrier for several hours each night to at least keep her upright. So he walked with her, bounced her, and tried to catch a little bit of sleep with her in bed several times, bringing her back to me midway through the night for my shift (I also had gotten quite sick, of course, so I wasn't doing too well either), and then taking her back when she couldn't get back to sleep at 4am because she was coughing so much.

We were afraid she was getting another ear infection, but on Sunday she seemed to be doing better, and even took her longest nap in several weeks (over 2 hours!). She continued to cough a lot at night, but whatever was hurting her before didn't seem to be a factor anymore so she at least was able to sleep through most of her coughing. She's even back in her crib for the first part of the night now, and although she hasn't been waking at the very beginning of the night as she had been, she's still been struggling a bit each night around 10pm so I've just been pulling her into bed then. I've been having some luck helping her resettle in bed without having to nurse and then getting another couple of hours of sleep in before she wakes to eat the first time, which seems like a better deal to me than her eventually resettling in her crib and just waking up to eat within the hour anyway. She has continued to nurse most of the rest of the night after she wakes the first time, but at least we're both able to sleep through it, so it really could be worse. Speaking of which, we should get back on trying to wean her from being swaddled ;)

In non-sleep-related news, it's been really fun to see Audra's personality developing. That's one of the hardest parts of this stage for me - being so excited to see the little person she's going to become and hear all the things she's going to share with us that it's hard to live in the moment, knowing a lot of really fun stuff is just on the horizon. Then again, I've been enjoying some moments that will hopefully stay in my mind forever of things that will only happen when she's a little baby... like the unexpected nap I took with her before her doctor's appointment last week, when she nursed to sleep and then snuggled up with me, with her cute little bare baby feet resting on my legs. Or when she was rooting so badly at a restaurant this weekend (despite just nursing before we left) that I actually had to nurse her in public, despite my nervousness that she wouldn't keep the cover on. She sort of tolerated the cover, but only nursed a few minutes, popping on and off the whole time to smile at me, and then was just so SUPER EXCITED about life in general afterward that it was pretty comical :) 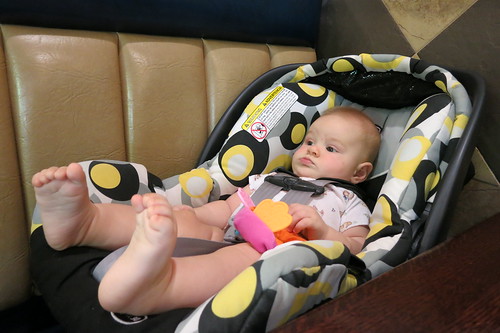 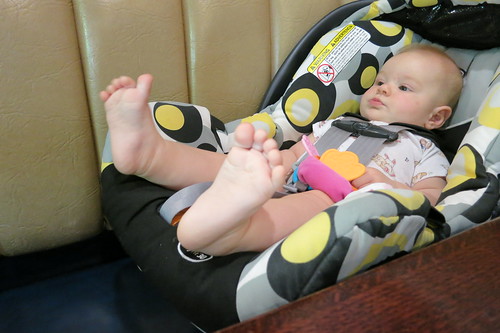 Audra seems much more aware of things now, and is starting to help get herself out of her car seat, and was slapping Ryan's arm the other night, possibly for attention? I walked down to the river with her in the carrier, and thought she was going to get whiplash from whipping her head back and forth the whole time, trying to take everything in... at least until we got to the river, and then she seemed fascinated by the water. Audra also discovered her feet, and seems quite pleased with them :) She seems to have started babbling now, and also loves to screech super loudly.

[Some hand slapping and screeching]

Audra started blowing raspberries with her tongue out this week, which is quite cute but also quite a bit messier. And then her tongue apparently just needs to stay out at all times now, possibly because it gets so much attention (from me, at least - I always poke at it) when she does that. 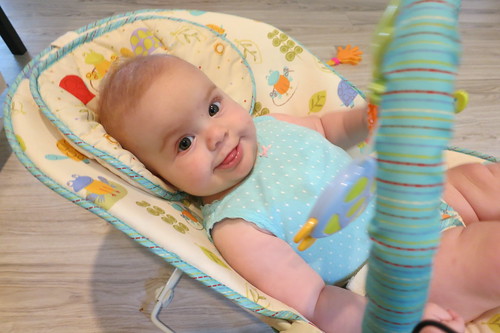 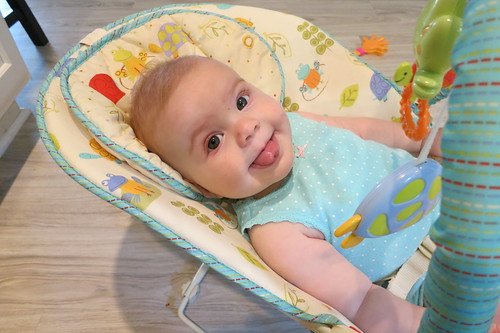 Audra has decided that she is just delighted with her big sister. Josie got her laughing the other day just by repeatedly yelling "what?!" at Audra, and then Audra started initiating their interactions by bouncing in Josie's general direction and laughing. While Audra has also been doing better with not hysterically crying in the car on the way to and from daycare lately, she does still tend to cry when Ryan first sets her down at home, but has been immediately stopping as soon as Josie comes over and then starts to flail and laugh at Josie instead :) 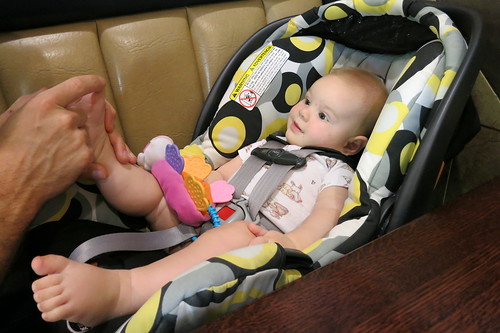 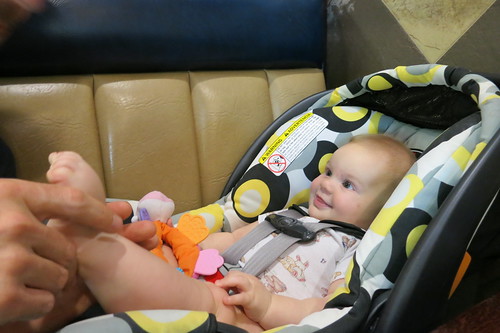 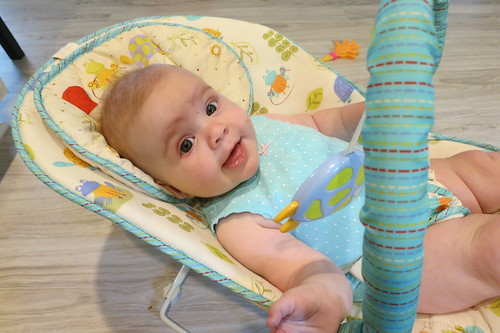 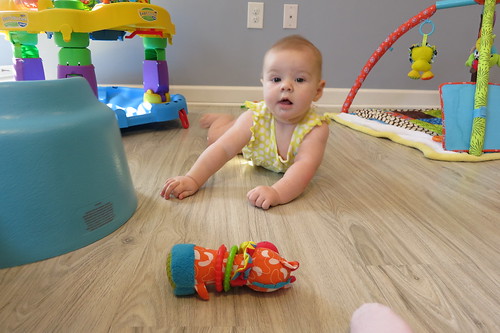