Last month was a birthday month - Josie turned 3 and I turned 34 :) 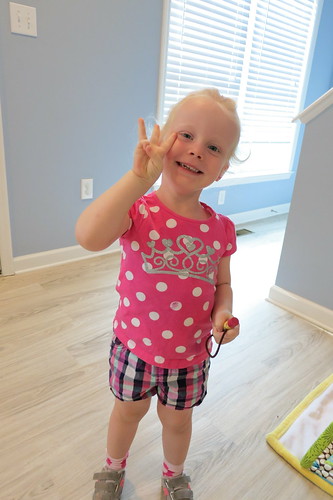 We kicked off Josie's birthday festivities with cake at her school on her birthday proper. She was so thrilled to see us - and her cake - and seemed so happy that everyone was finally singing "Happy Birthday" to her. Then, true to form, she ate her cake incredibly slowly and was the last one sitting at the table ;) She finally wrapped things up and we brought her home early to watch "Frozen". She loved the cards and presents she got, and wanted to read the cards over and over (and over) again. 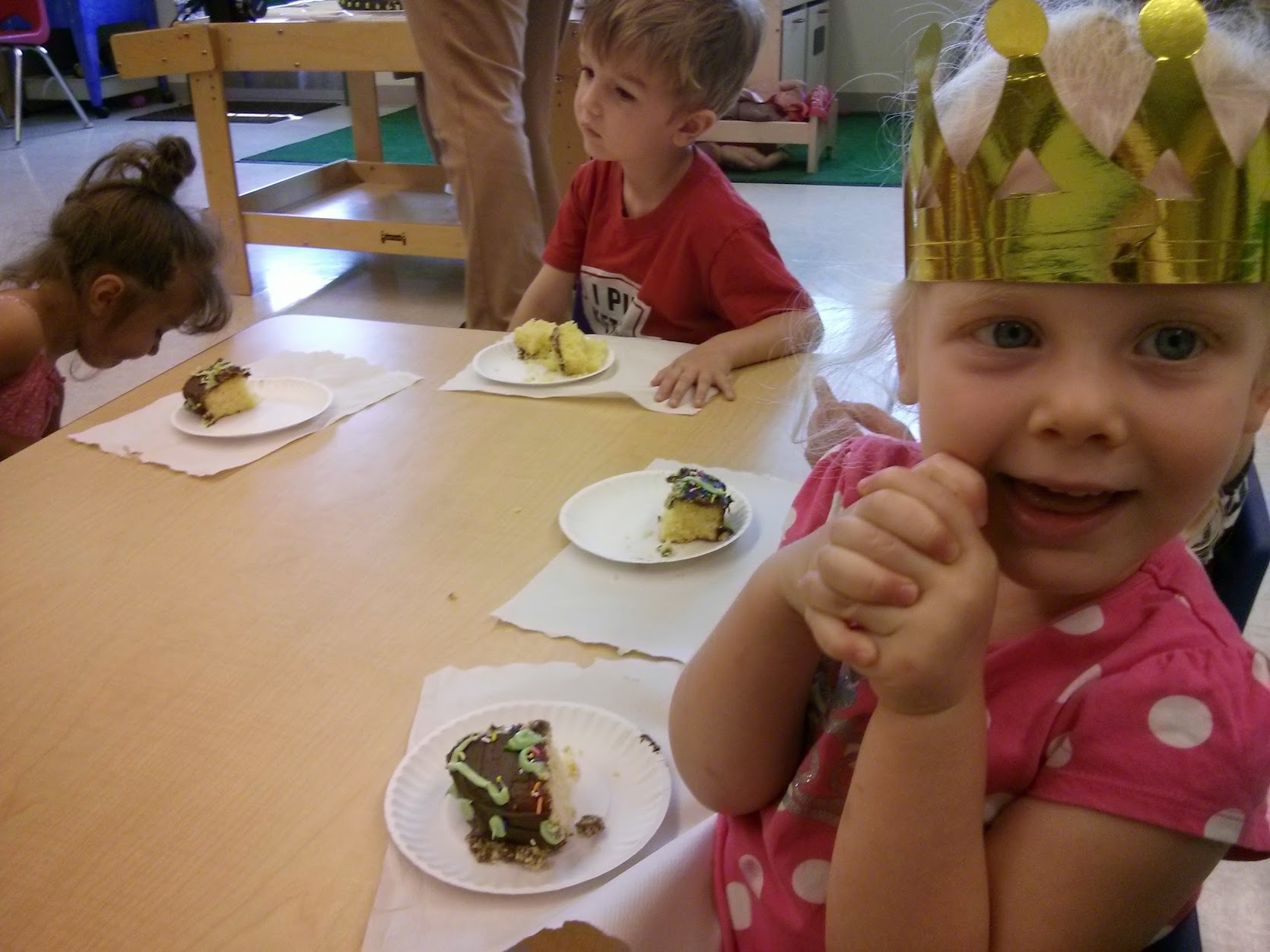 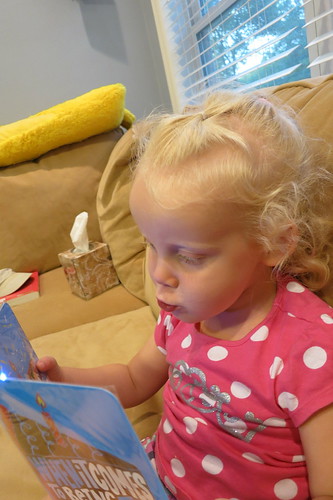 The next day, she woke up and told me she was "a little bit bigger" (with thumb and forefinger held slightly apart accordingly), and that she was still 3. This was an improvement from when she woke up on her birthday. We had been telling her when her birthday was, and when I told her happy birthday as I was waking her up that day, she responded that it wasn't her birthday and that it was too far away. I told her, no, this is your birthday! It's happening RIGHT NOW!! But she didn't seem convinced at the time :)

Josie also got to go to the doctor for her three-year well child visit, which she was super thrilled about... until we got there. Then she got a bit more apprehensive during the exam, but still did very well doing whatever the doctor asked of her. She now measures 39 1/2" tall (90th percentile) and weighs 37.2lbs (75-90th percentile). She appears to still be hitting her milestones just fine, and is perhaps a bit ahead of the curve with some things (like knowing her shapes, numbers, and letters, doing some simple math).

After going to one of the community rec centers for the birthday party of one of Josie's friends several months ago, we liked it so much we thought we'd do the same for her birthday :) So we rented out a room at the rec center and got a couple of hours in at the indoor pool there. We'll see if we feel more up to doing something at our house next year (which is more likely to be the norm), but it was still nice to not have to worry too much about planning - and there was a big water slide there that I found quite fun. We don't have that at home ;) 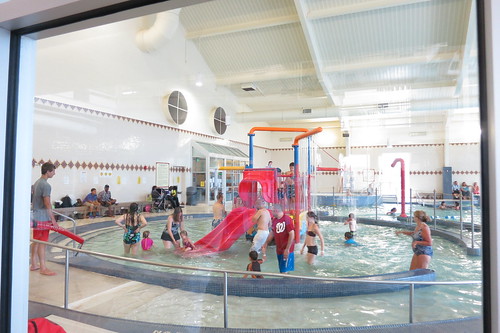 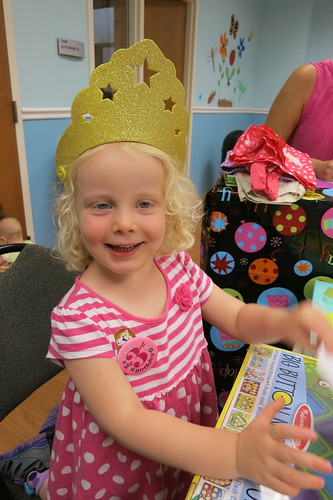 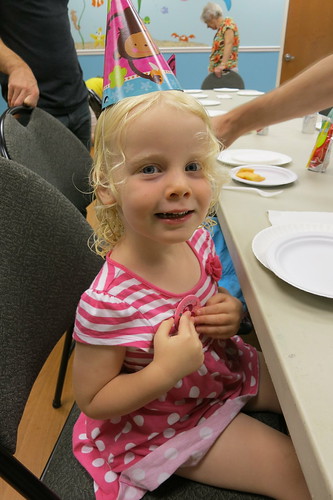 Ryan's sister Alyson came over that weekend to help with her present to Josie and me: two pear trees. Trees seem to be a good present for us at the moment, as we start to fill in the garden. So we now have the pear trees and a peach tree in the garden (all courtesy of Alyson!), and Ryan also got me the weeping willow I had been hoping for. So hopefully in a few more years we'll have a picturesque weeping willow over our pond :) 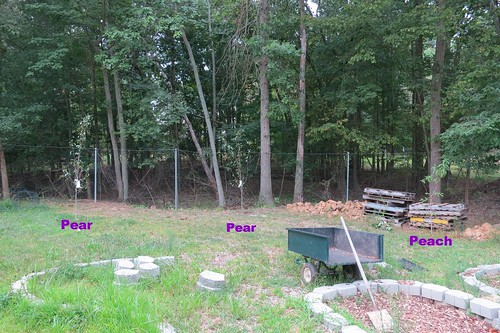 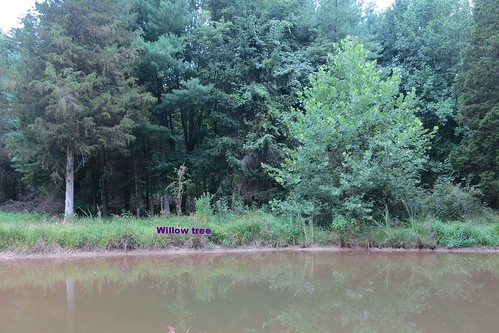 So Alyson came over to help plant the trees, and when Ryan was getting Josie up from her nap, he mentioned that Aunt Alyson was over and that she had found Josie's pink gloves (that she had gotten for her birthday and we had already momentarily displaced), and Josie immediately sat straight up and said "And my big shovel too?!" despite being mostly asleep still. Yes, Josie got gardening gloves and a (not that big) shovel for her birthday, and she loved them. 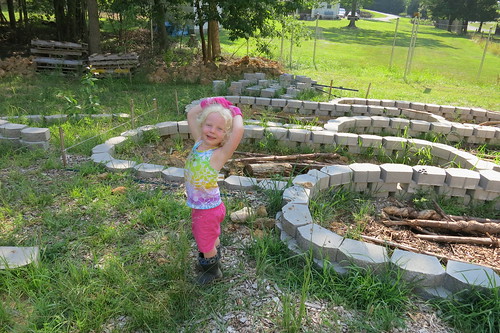 
We also had some success with craigslist, and picked up a used playground (that Ryan is still working on putting together/making more sturdy), and a Gator. And with that, we are pretty much done with getting stuff for Josie. This kid has more than enough (i.e., too much) stuff already, and we're seriously having to hold ourselves back from purging all the stuff she's outgrown or just doesn't use that much... seeing as how we're not sure what Audra will want to play with yet :) But I'm glad it was a tractor that came up for the right price on craiglist rather than, say, a Barbie convertible, because it's nice that it's at least functional as well as fun for her. She loves it (and the passenger seat is appropriately called "Audra's seat" - Josie has big plans for her!) and she does really well driving it now, but she can also haul stuff with it. So she and Ryan spend quite a bit of quality time together moving mulch with their respective tractors ;) 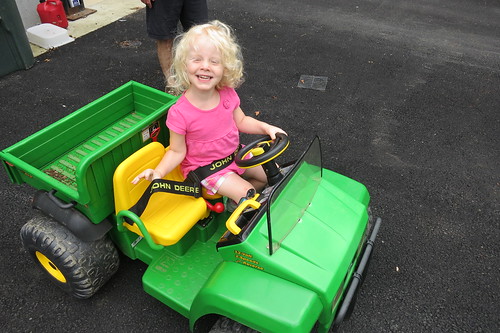 Speaking of Audra, Josie has really been getting into Audra more now. She asks pretty frequently now if Audra is awake since she wants to play with her, and was all excited the other day when I told her Audra was awake and asked Josie if she wanted to go see her - Josie ran over to the bedroom, climbed right up on the bed with her and kissed Audra a bunch of times and rubbed her belly :) And after noticing Audra staring with obvious intent at her food one night, Josie told Audra "You're too little to eat sweet potato, I'm sorry," and then patted her head and held her hand. Too cute.

Since Audra still hates the car and it's the season of barbecues (most of which are not within our self-imposed, sanity-saving 15-minute limit from our house), Josie became my barbecue buddy this summer :) We went to a few different barbecues, and I realized it has been a while since we've really gone a ways from home, as she was almost more excited about the trip to and from our friends' houses than the parties themselves. There were so many "bridges" (i.e., overpasses) to go under or over, dump trucks, limos, orange cars - you name it, and Josie was super impressed by it and kept saying a reverent "oh wow!" about everything :) She also was excited about seeing all the dogs at the barbecue we went to on July 4th, but it turns out she likes dogs in theory more than reality at the moment, since she got pretty intimidated by them once we arrived and then wouldn't even go through the gate... at least until she saw the toddler pool they had set up, which she made a beeline for and then spent pretty much the rest of the time we were there in :) 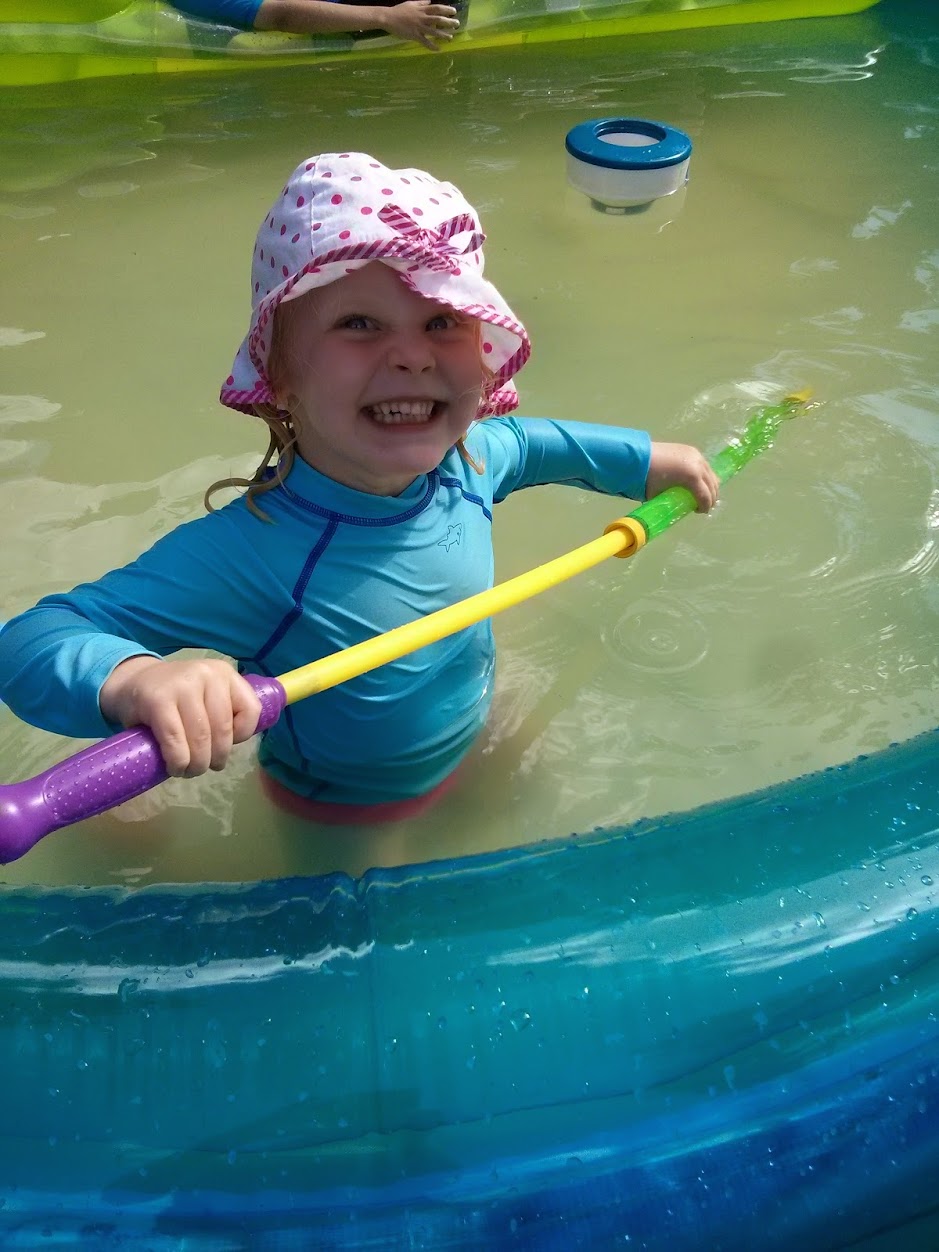 Then she sang "Happy Birthday" to herself almost the whole way home, interrupted only when I suddenly had a suspicion that we had had a language misunderstanding. She had gotten out of the water (briefly) to eat dinner, and since we needed to leave soon, I gave her the option of having dessert or going back in the water for a few minutes. She quickly chose the water, which was fine, but then on the way home I asked her if she knew what dessert was. She said "yes", then "I don't know" when questioned further, and once I explained, she very forlornly said "Oh." I'm thinking now she would have given a different answer had she known what "desserts" entailed ;) We didn't feel up to going out to fireworks that night (with dealing with traffic and her being up past her bedtime), so Ryan set up their own private fireworks show upstairs - blocking out all the light, bringing over a fan for a cool breeze, and watching fireworks from DC and Nashville on the tv :)

Ryan and I came to the realization that I need to get out of the house more... I've been so focused on Audra and keeping the house running that my focus has perhaps gotten unnecessarily narrow, and I've been only rarely leaving the house except for work and school (e.g., the aforementioned barbecues). So we instituted Mommy/Josie outings every other week, and we had the first one in July, going to a local water park. We had a good time, although Josie was definitely not into the big bucket of water (or really any water) dumping on her head, and she spent a good portion of our time there just bouncing around in the deeper water and singing to herself. She was cold afterward, so we cuddled up on a chair and just sat... which was nice to just be able to be still together and enjoy each other's company, and not be rushed or running around like normal. On the way home, I could have sworn I heard her say "I love you, Mommy", which was so heart-warming, but when I asked her to repeat herself, she told me she loved Chick-Fil-A instead, and so did all her friends. Ah well ;) 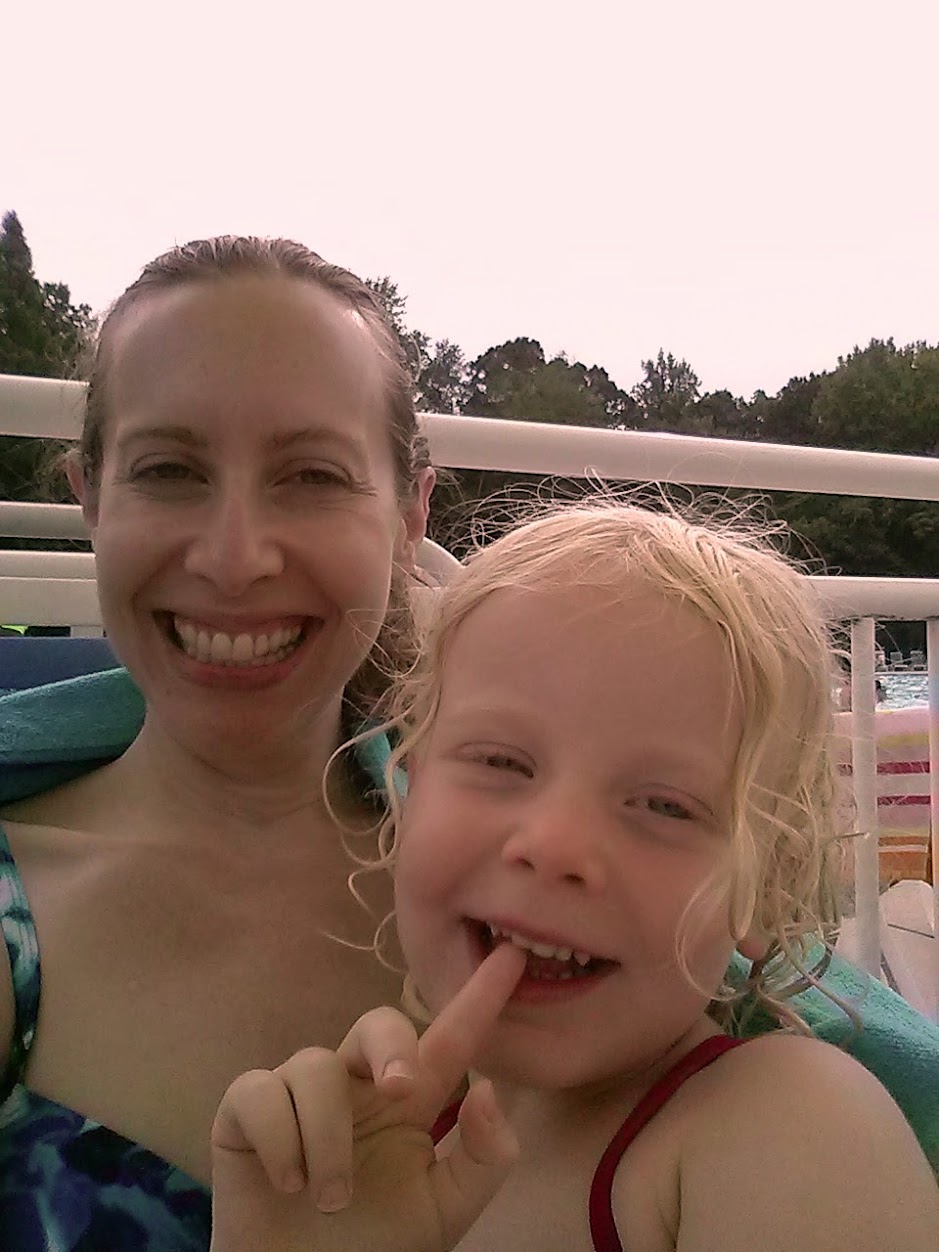 In terms of developmental stuff, Josie has been getting a bit better about using her words to say what's wrong when she starts crying... it sometimes takes a bit to get her to tell us, but I think she's starting to realize that we can help her (or at least address what's upsetting her) more quickly once she actually tells us why she's so upset. She also has been really into noting what things are different or the same, and really likes the new routine of picking out a book or two to read before bed. She's getting the first inklings of understanding sharing now, usually concerning food. She has tried to get our food ("you can share with me!") but has also been offering us her food... perhaps not coincidentally, mainly things I don't like (e.g., tomatoes, cheese). She then tries to cajole me to eat it, telling me to try it, I'll like it! And then after I finally do, she asks, "How was it? Good?!" I'm starting to get an understanding of what it's like to be a toddler, now that it's being directed at me ;) 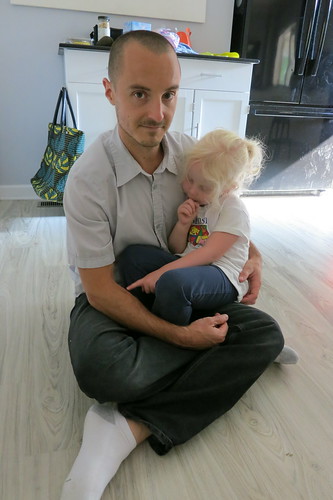 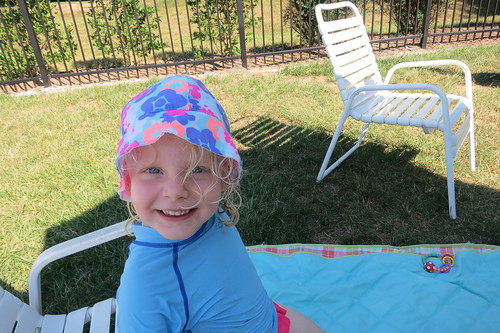 [At the pool for my birthday] 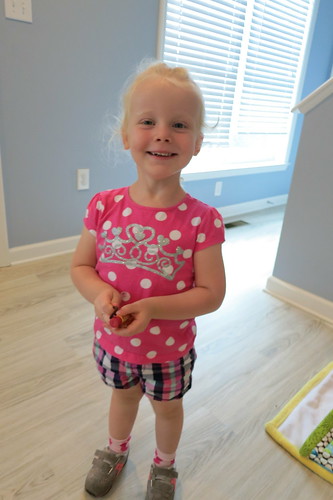 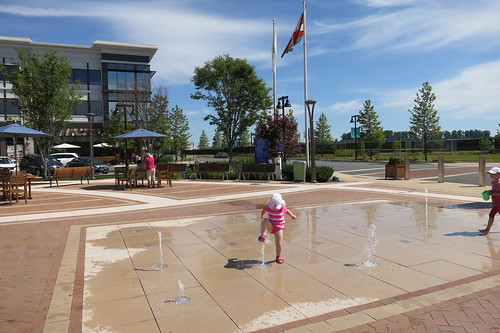 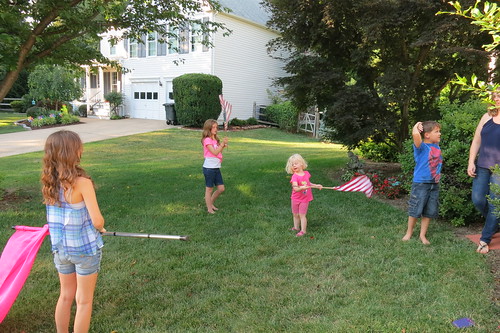 [Lots of twirling of flags with her cousins]
[The soundtrack of our lives lately - "Let it Go" (on repeat) from Frozen]
at 9:06 AM