Poor Audra came down with another cold this week :( I'm not even sure what number this is, but it seems like a lot, especially for such a young baby. So she's congested again, and the last few nights she has been up coughing for an hour or more before it eased up enough for her to fall back asleep. I've been running a cool mist humidifier (and diligently doing her baby massage in hopes of avoiding another ear infection), but it's so hard to not be able to do anything else for her beyond that.

Audra was also more fussy than normal this past week - crying whenever I'd put her down and/or go in the other room, screaming and crying hard with Ryan while I was out with Josie one afternoon and only stopping to inspect a knot in the wood floor of the porch (and for Josie, once we returned). I suspect it's a combination of being tired (she had only napped for an hour total before I had left with Josie) and another development leap. My trusty "Wonder Weeks" book says this is to be expected around this age, as babies start to understand distances more and it becomes more alarming to them to see how little they are in this big world, and that their caretakers are further away than they'd prefer. But then Audra took a 3.5-hour nap one afternoon (after a half-hour nap in the morning too) and was simply delightful for the rest of the day, so maybe it is just more tiredness than anything.

But even when she's fussier at home, she's able to calm down and bring out some smiles and giggles so long as Josie is around :) Josie usually just needs to look at Audra to make her laugh, but Audra makes Ryan and me work for it a bit more. Our go-to methods of getting her to laugh are for Ryan to rub her belly with his head, or for me to blow raspberries on her belly or kiss/nom on her ears or neck.
Audra also seems to do quite well entertaining herself in the pack n play, which is good, since I have a feeling she'll be spending more quality time there soon enough - Ryan has been taking her on his morning walk when she's up before our 6:10am alarm (which is just about every morning) so that I can get ready for work in peace, but pretty soon she's going to be too heavy for him to schlep around for that far comfortably. She's able to maneuver herself around quite well on the floor, and while she hasn't tried lifting her whole torso up and crawling too much yet, she does scoot around on her back on the floor, and can also push herself forward with just her toes. She is remarkably persistent and deliberate in getting around too - she'll roll and twist and scoot herself all over the floor in pursuit of toys (including lots of pounding on the floor), and seems to have a pretty high tolerance before she gets frustrated. 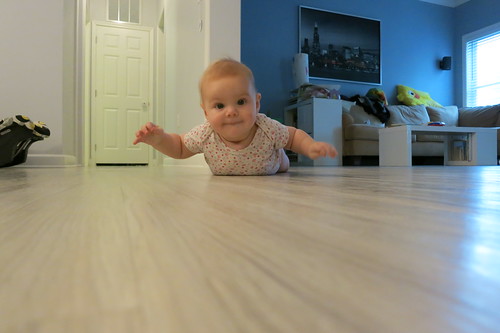 And then after all that motion, Audra has also done the opposite, and had some moments of complete stillness and contemplation. This may not sound that noteworthy, but when her normal is constant movement, it stands out when she's suddenly very still. She also is very into sucking her toes, but only on her right foot, and usually only when she's in the middle of a diaper change (conveniently!). She is normally super quick about grabbing my hair (and yet I haven't learned, and still wear it down around her 99% of the time), but last weekend she seemed more enthralled with it rather than using it more for functional purposes (i.e., holding on for stability), and was stroking it and cooing happily as I swung it over her. One night she also grabbed my hair as I set her down on the bed to get her into her sleeper - she was so delighted with it that instead of trying to get her to let go of my hair right away, I just let her be and nuzzled her neck to make her giggle. When I next looked at her, she had closed her eyes with blissful glee as she laughed and held onto my hair, and although I had been thinking of cutting my hair (which I haven't done since before she was born), I rather suddenly decided that I will most likely not be cutting my hair for quite a while after all :)

We continued with no swaddle this week, and while Audra usually wakes every half hour before I go to bed now, there were a few nights where she went an hour or an hour and a half before waking the first time. She also has started stretching out her night-time wakeups after I go to bed again, going from every 1-2 hours all night, to a few nights of every 2.5-4 hours. The 4-hour stretch of sleep has only happened once (in recent memory, at least), and it was amazing, except for the fact that I must have been laying funny - not that big of a deal when I'm just going to be awake in an hour anyway, but it's a bigger problem when it's that long of a stretch, and now I still can't move my neck. Ah well, it was still worth it ;) 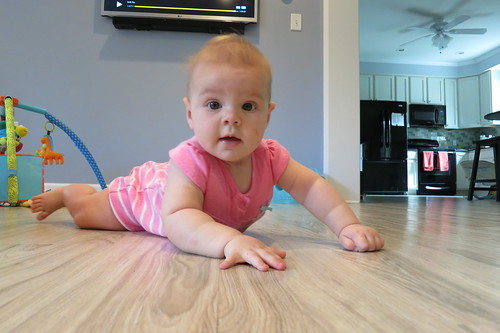 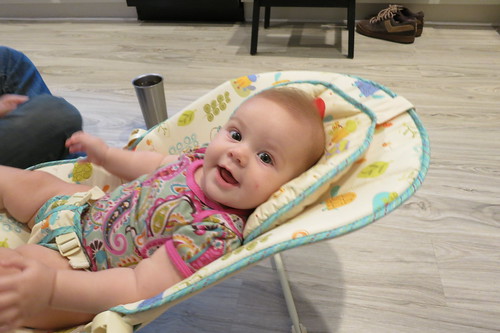 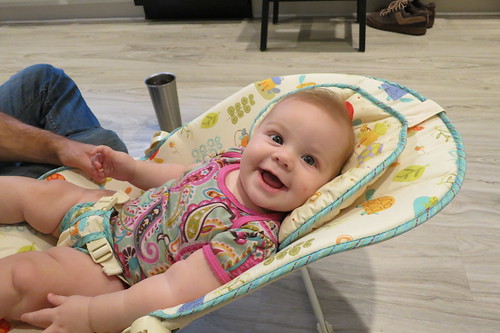 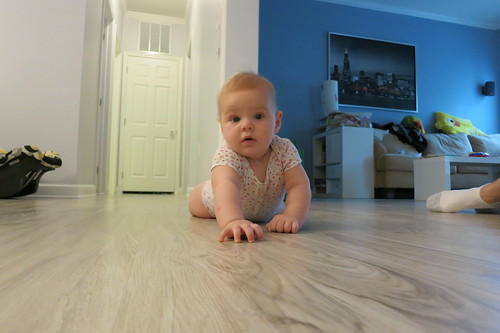