In November, we finally took our first trip as a family of four to my mom's house. It's only 45 minutes away, but that 45 minutes sometimes seems insurmountable when one member of our family dislikes the car so much. We made it almost all the way there before Audra just... lost it, so the last 10 minutes of the drive were pretty harrowing. Then Audra just wanted my mom to hold her for the first 10 minutes or so we were at her house until Audra recovered, and then she was all over the house, delighted and getting into everything. It was just a short visit this time, with us only staying the night and heading back home just after breakfast, but we finally did it! So hopefully we'll feel more emboldened and start reciprocating more with visiting my mom (or aunt's!) house, since they've almost exclusively been coming to our house for the last few years. 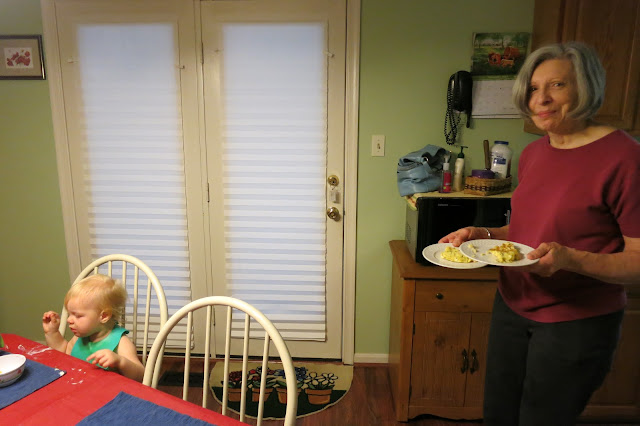 Another milestone for Audra's 21st month is that, for the very first time, I was able to do something in another room, leaving Audra alone, without her crying. This was monumental, since usually if she knows I'm in the house, she is in the same room with me and/or crying because I'm not sitting there stationary with her. But finally, she was distracted enough by the TV ("Oh Google, OWL!" or "BABY OINK!" for Peppa Pig) that I was able to leave her in the living room and wash dishes all by myself in the kitchen... she could still see me, and while I'm pretty sure I saw a brief moment of consternation in her eyes when she saw how far away I was, her love for Peppa Pig won out ;)

In yet another milestone, Audra went her first full day without a nap, and actually did quite well... in part because of TV, yet again. She asked to watch owls on TV in the evening (which is normally when she'd melt down and fall asleep if she hadn't napped before), and then was super excited when some suddenly appeared on the screen. She watched some dog videos with me too, laughing so hard that she fell over at one point ;) 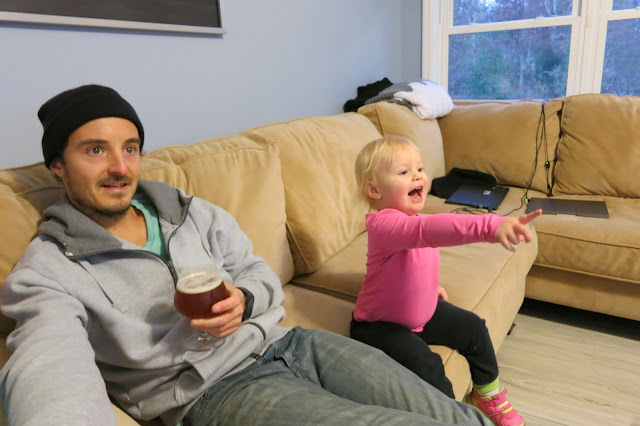 Not napping didn't do her any favors for her sleep that night though, since she tends to sleep more poorly at night after a day of insufficient napping. So she woke a bunch of times overnight and really struggled more than usual to stay asleep. But yet, a few days later, she went the whole night without nursing for the second time ever. I can't quite call it "sleeping through the night", since she did seem to fully wake overnight, but she was able to resettle herself without nursing (although that entailed spending part of the night lying on my face and neck). I also converted Audra's crib into a toddler bed, just on the off-chance that she'd actually want to sleep in it ;) She was pretty into it at first, and immediately climbed in and pulled the covers up, but alas, she just pretends to sleep there rather than actually doing it so far. 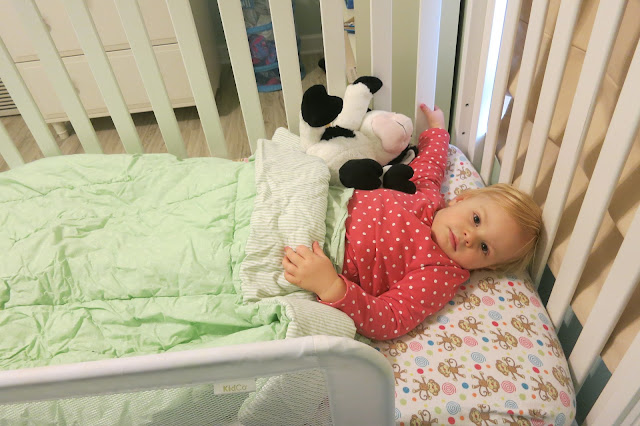 Ryan also watched both girls all day for the first time, since I had to work the day after Thanksgiving, while he (and the girls) had the day off. I stayed upstairs the whole day to work (with Ryan leaving me food and drink on the stairs) and successfully hid my presence from the girls until the evening, when Ryan asked Josie to yell out to me and she was shocked when I responded ;) But Audra (and Ryan) did well, going over to his parents' house in the morning, and then Audra actually took a good nap for Ryan in the afternoon. She did come out of her room crying after the first hour, but then fell right back to sleep on Ryan's chest. So that felt like another restriction being lifted (from me, at least), since I've been responsible for every one of Audra's naps at home since the day she was born, except for those times when she just wouldn't fall asleep for me and Ryan would take her on a "walking nap". So while I don't want to turn over her naps to him entirely (in part because I so enjoy my own naptime!), at least now maybe we can switch kids on occasion, and I can go out with Josie for birthday parties, etc., while he handles naptime with Audra.

After a few weeks of picking up new words more slowly, Audra appears to be going through another language explosion, seemingly learning 1-2 words a day and stringing together more phrases now. She even knows at least one word in a different language, since she says "habibi" ("my dear" in Arabic) now too :) She learned "thank you", "pickle" and "phone" (which she had been calling a "hewo" up until then). She also brought me my phone one night, saying "Nana, Nana!" and then loved it when I actually called my mom on the phone (demanding "more Nana!" afterwards). Audra also knows "boy", and referred to an "other boy" as we were reading a book, so she seems to be able to differentiate between two of the same thing now. She also is starting to memorize her books, since I caught her reciting "Peek-a-who!" to herself ;)

Audra also learned the word "turkey", not at all coincidentally on Thanksgiving ;)

We hosted Thanksgiving again this year, and Audra had a great time. She handled being woken up from her nap to a houseful of people, ate well, and discovered her love of whipped cream, which she just ate straight with a spoon until she ran out, then happily licked her date nut bread and ate her pumpkin pie with her index finger. 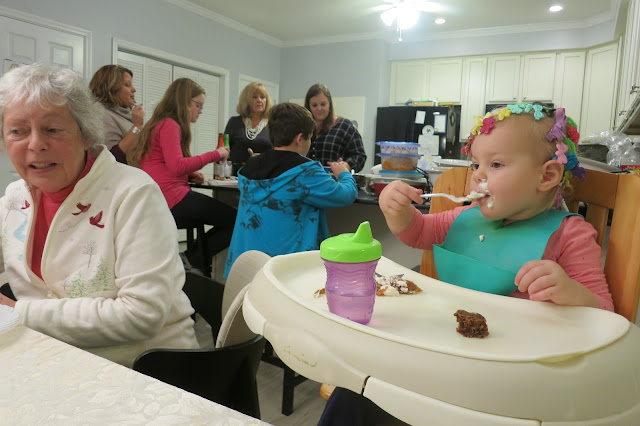 She apparently asked her cousin Taylor for a hairbow, which initiated the most epic hairstyling she's had to date. They got out Josie's bowl of barrettes, and Audra handed just about every barrette to Taylor, who then placed them in Audra's hair. We learned that day that apparently 66 is the number of barrettes needed to make a helmet of them on Audra's head ;) 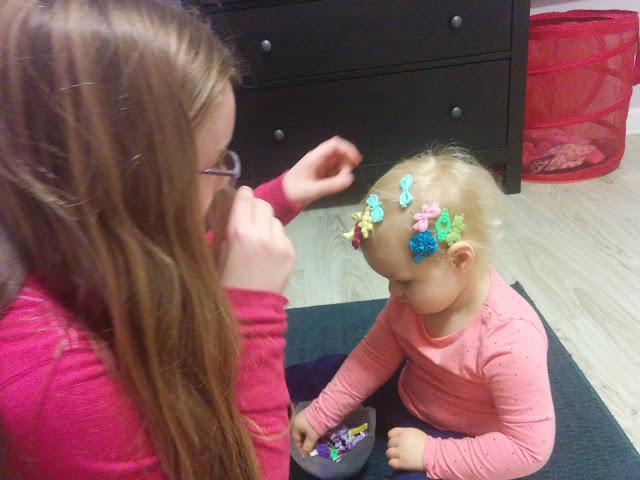 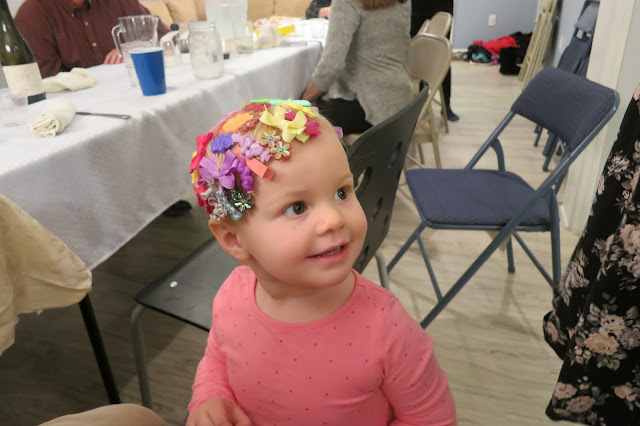 Audra is also becoming more interested in physically manipulating her environment... specifically, me. So she has tried to pick me up more than once now (saying "up, up, up!" while trying to lift me from different angles), and has literally pushed me out of the way when I was blocking the cabinet she wanted get into. Audra is also just very observant, and picks up on things and makes connections that are a little unexpected to us so far. For example, Ryan told Josie to wrap it up with her phone, and Audra somehow recognized his intent (if not the words) and immediately yelled "Jojo, all done phone!" 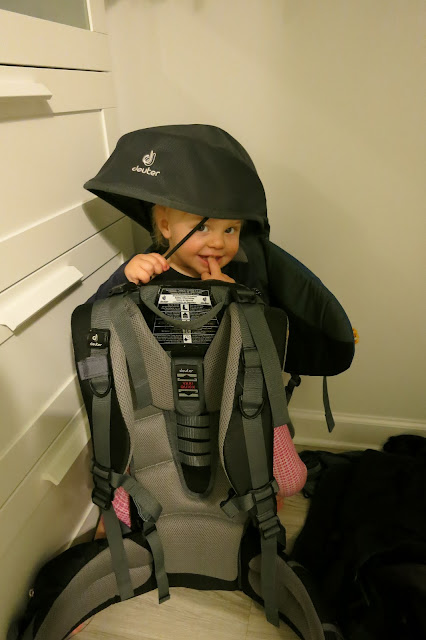 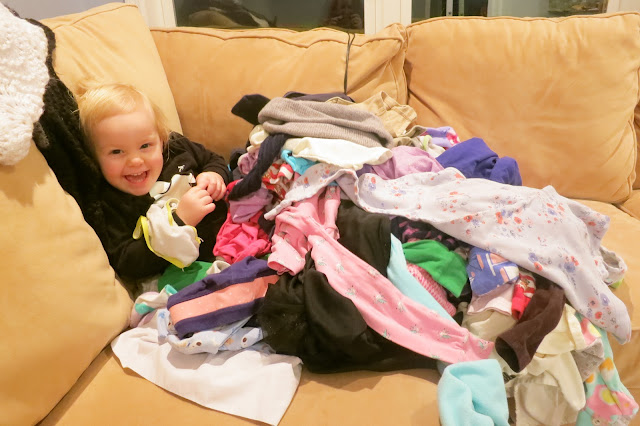 [Definitely not helping with laundry] 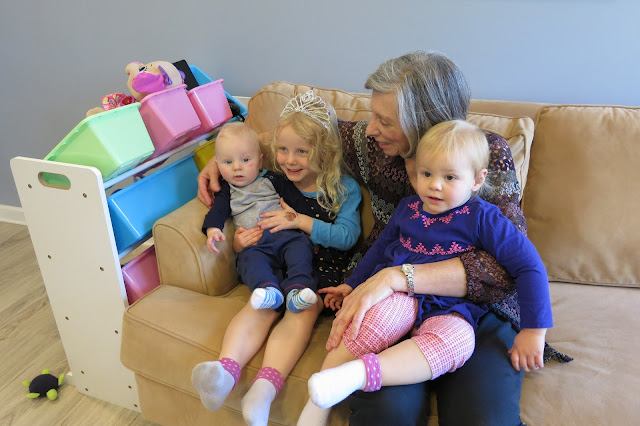 [Nana and her grandbabies] 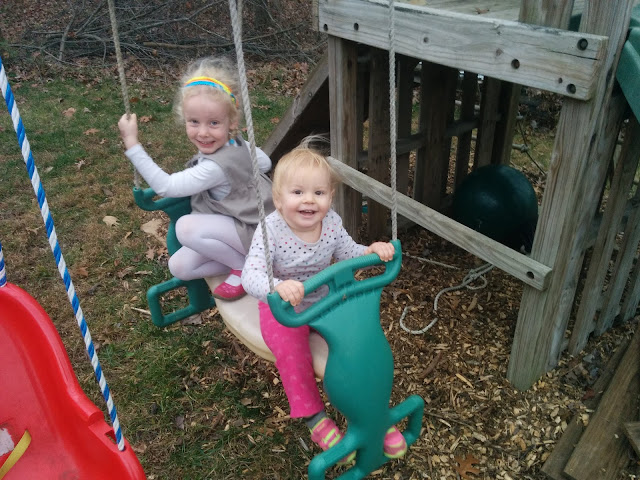 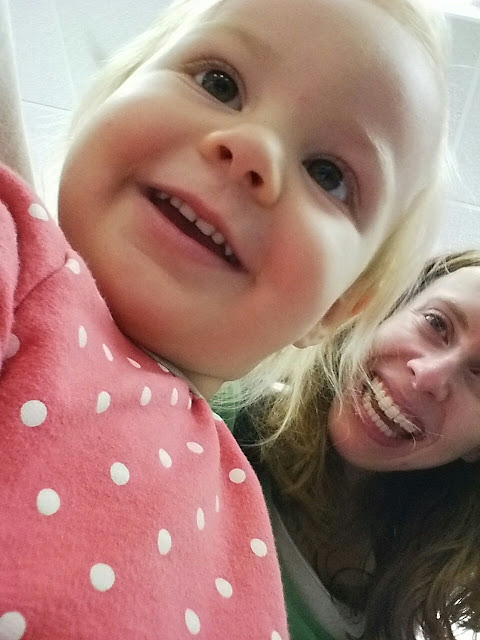 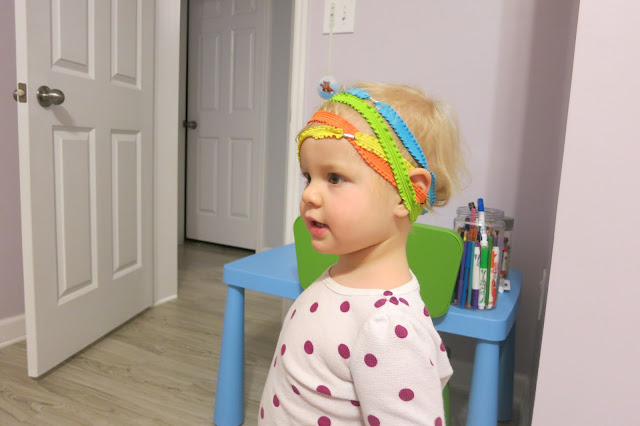 [The search for Mommy's constantly-disappearing phone continues...]
at 9:11 AM