We had lots of activity - and fun - in Audra's 22nd month :) First of all, she slept through the night again (three whole times now!), which got us started off on the right foot ;)

We went to a couple of holiday parties, one of them 45 minutes away to see some friends in from out of town. Audra did well in the car both ways, played well there (lifting many heavy things), and was generally very cheerful the whole day despite not taking a nap. We also went to the house of one of Ryan's coworkers, whose entire basement is pretty much a playroom. Audra was right in the thick of it, pushing her way into the little room under the stairs with the big kids, and taking possession of the little grocery cart and pushing that all over the basement.

Josie had a dance performance at her school that we all went to see, and I'm pretty sure Audra was one of the most excited people there :) Audra grabbed all of the baby dolls in the room (and passed them out so each of us had one to hold), and then clapped and kicked after each song. 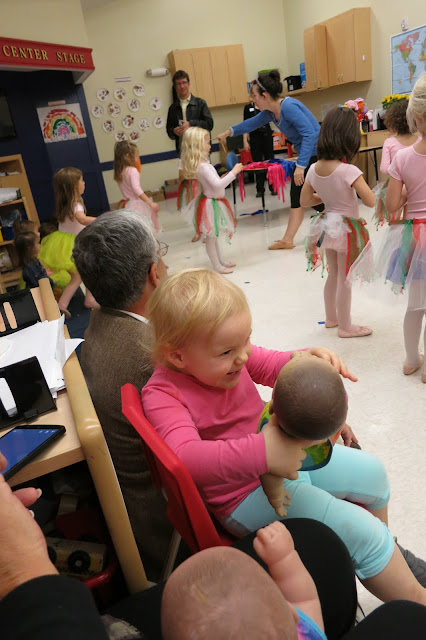 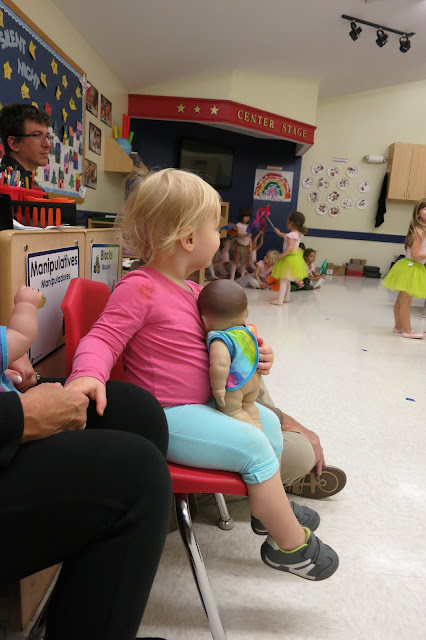 Ryan and I also had our work holiday parties, so we actually went out two nights in a row (shocking!). Ryan's mom watched the girls so we could go to Ryan's work holiday party, and Audra ate really well, and actually put herself down - laid down on my pillow, and Patti just gave her a bottle and left. Audra was apparently fine with this arrangement as long as the door was left open. Who knew? She still woke shortly after I went to bed around 10:30pm, but still had done far better than I was expecting :) Then my mom watched the girls the next night, so Ryan could go to a sneak preview for Star Wars, and I went to my work holiday party. Mine was earlier in the day, though, so I made it back in time to split bedtime duties with my mom.

Audra's language continues to be pretty amazing. She randomly started pronouncing things better, so that "open" no longer sounds like "oop-ee", "water" no longer sounds like "waa-da", and "Josie" sounds less like "Jojo" and more like "Jojie"... although then she slid back the other way and started calling her "Jo-key" instead. She apparently knows some numbers too, as she added "six seven eight" after I said "five". Some of her new phrases are "mommy 'puter", "happened?" (for "what happened?"), "Mommy, where you?" (for "Mommy, where are you?").

Audra just seems to understand so much more now, so it's fun to see how much more she cooperates and how much more interactive she is. She asks us for help now (so much better than just indiscriminate screaming!), and offers us help too ("Ah-dah hep Mommy!!!"). She also interjects herself with Josie, like when I told Josie to sit on her own stool and Audra immediately yelled "No, Jo-key! Stop!" while pointing at Josie disapprovingly... before immediately putting her head in her hands and pretending to fall asleep when I told her in turn to stop throwing food off her tray. 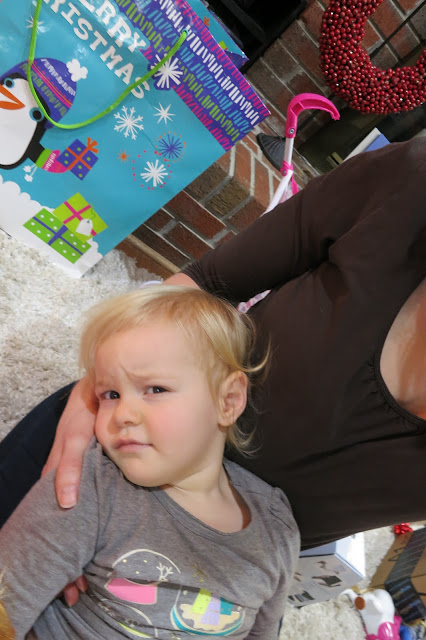 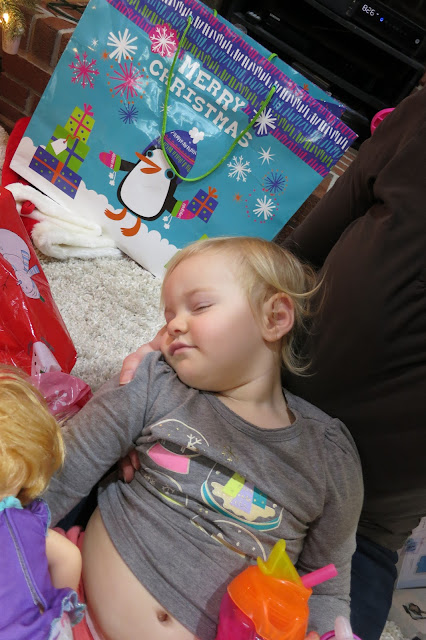 [...followed shortly by pretending to sleep]

I also got my first "No, thank you" from Audra, when I was just mildly messing with her one morning. I had just been poking her with my toe, which isn't much of a justification for messing with her, but this was also most likely in reaction to one of her favorite morning games: something I like to call "Mommy boot". This game is comprised of Audra grabbing any of my boots with zippers on them, and making me put them on and off while I'm trying to get ready in the morning, while she narrates with a constant stream of "Mommy boot! Zipper! Oh no! I did it!" 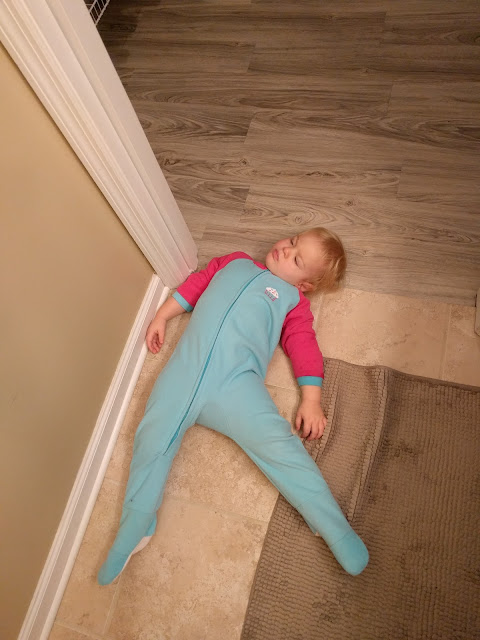 [This is what she does when we don't play "Mommy boot"]

Audra's bedtime has been... interesting lately. She usually fights me on some part of the routine (usually brushing her teeth or changing her diaper), but I've discovered a magical formula with her: I say "let's do X, then we'll do Y", which instantly makes her more cooperative in doing X, regardless of what Y is (I've even tested this with made up words for Y - still works!). Once I finally wrangle her into her pajamas and we do books, she needs to pick out what she's going to sleep with at night... and since I nurse her to sleep, I have a vested interest in her picking something without sharp corners to poke into my face as she hugs it to herself. I usually push for her baby owl, but unfortunately, her usual choices are books, her new baby doll (including all of its accessories), or Spiderman. All poky.

While Audra participated pretty well with Christmas activities last year, this year she did even more so. She helped with decorating the tree, although the lower third of the tree definitely only had minimally-breakable ornaments on it, and she still broke a couple. But her clasping her hands and pronouncing "pretty!" at the lights was so sweet :) 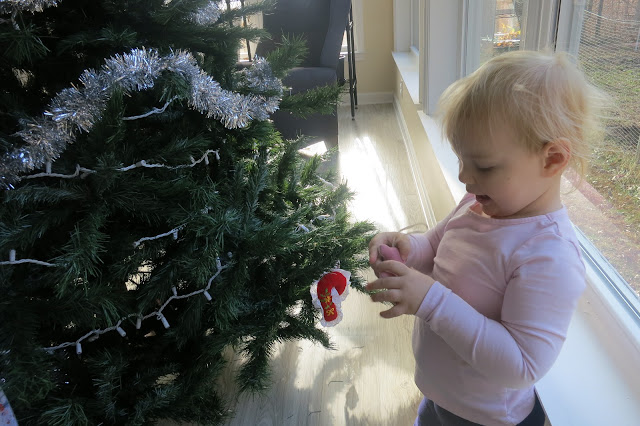 We also did "posed" Christmas pictures again this year as part of Ryan's mom's present. I still don't understand how anyone ever gets kids to look at the same place and smile at the same time. We took about 150 pictures (in burst mode, which was very helpful), and we ended up with two workable pictures... but lots of outtakes ;) 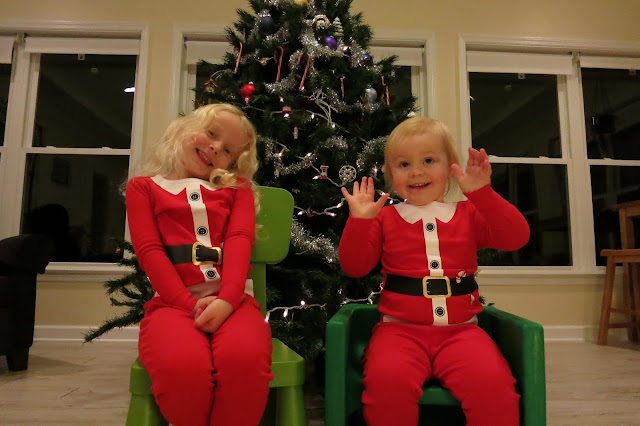 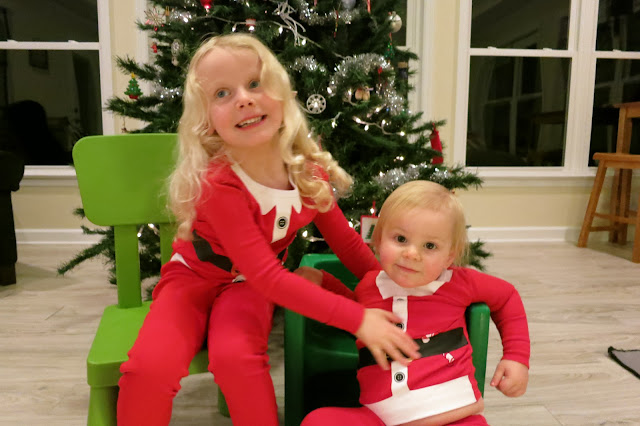 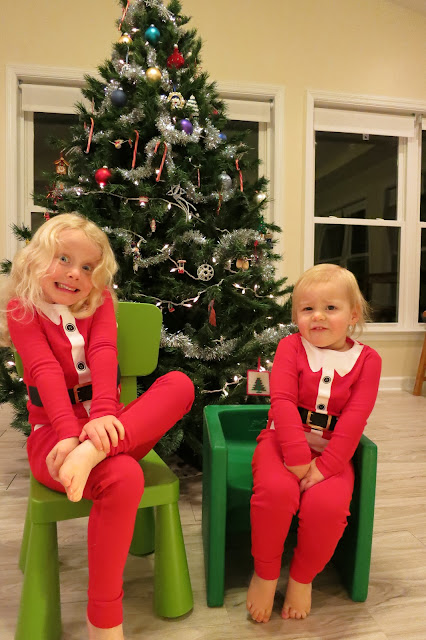 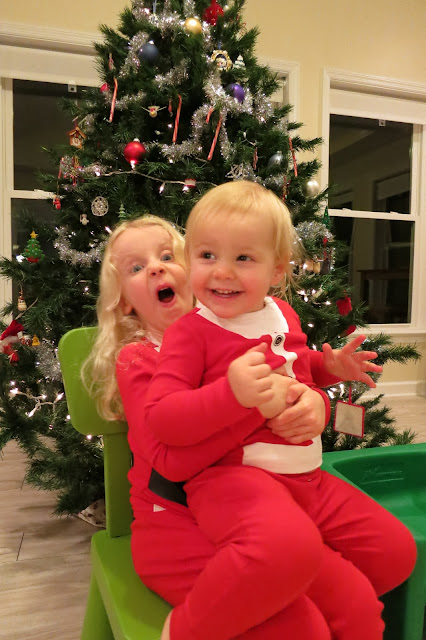 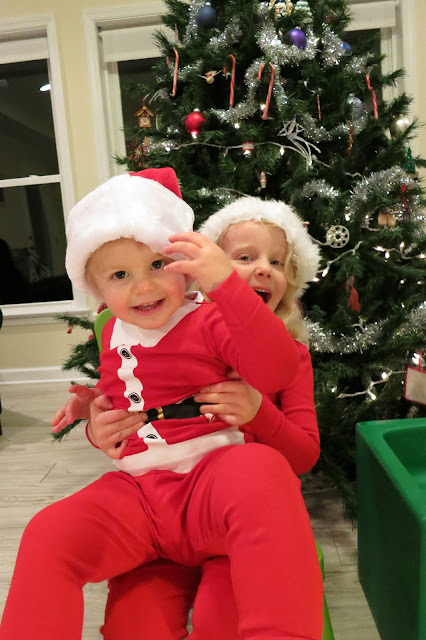 We got together with my side of the family just before Christmas. Audra had fun opening her presents, helping other people open their presents, and generally just being very... involved with the presents part of the day ;) She was also quite excited about her baby cousin Benjamin, ranging from gently touching him to yelling "baby!" at him. 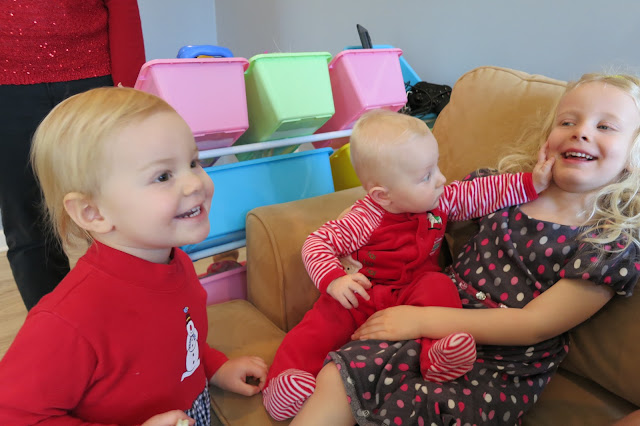 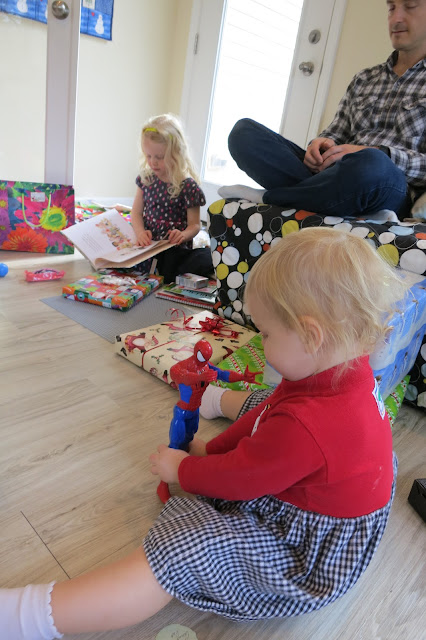 We opened presents at our house Christmas morning, and Audra was just so wonderfully content with her gifts. She was happy to open them, but seemed to be equally happy just playing with whatever was in front of her at that moment. One of the favorites was Ryan's hammock... which was sadly short-lived, since the seams tore within a week or two so we had to send it back. 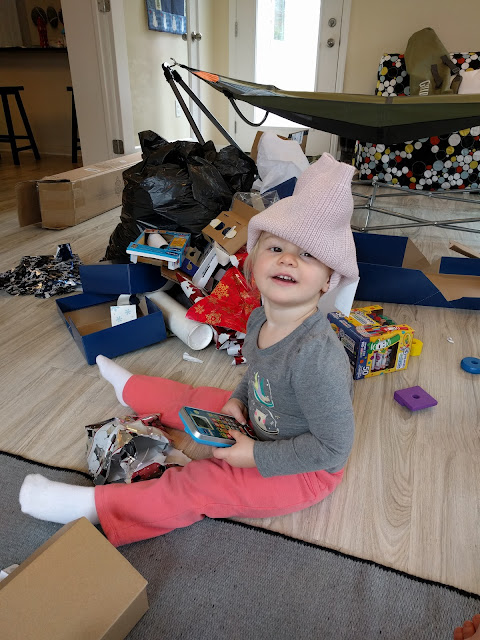 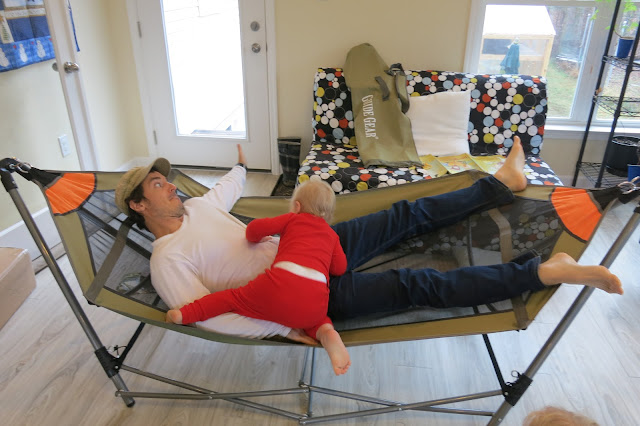 After presents at our house, we headed over to Ryan's parents' house. Audra dove right into her presents there, and she particularly loves loves loves her new baby doll and stroller. We did lunch after that, and then went off to take a short nap upstairs. Apparently Christmas had worn us out, though, since I passed out with her for a couple of hours, and then got some reading time in on my new Kindle while she slept a third hour. All in all, a wonderful Christmas :) 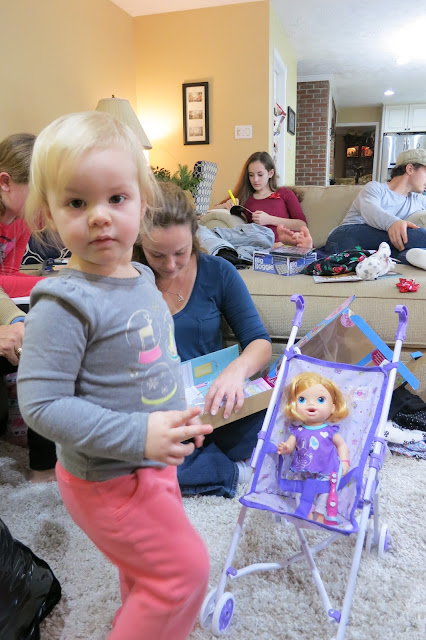 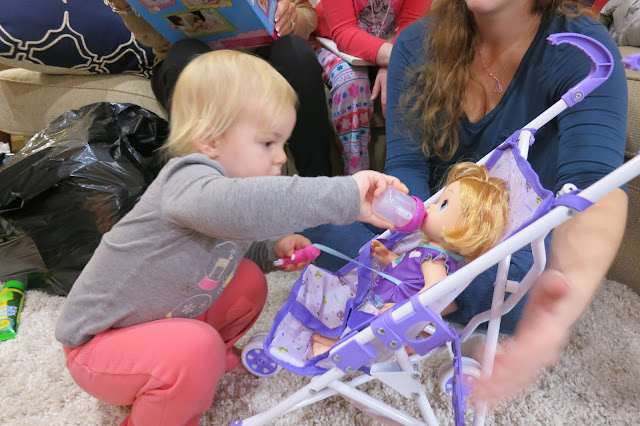 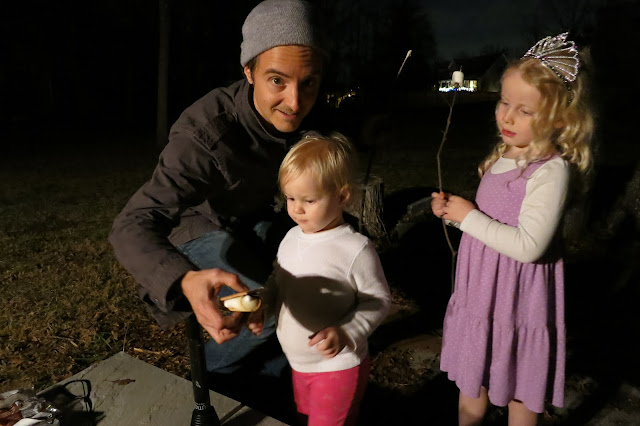 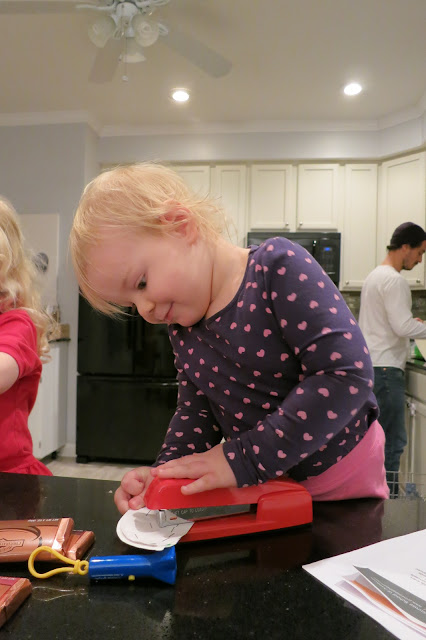 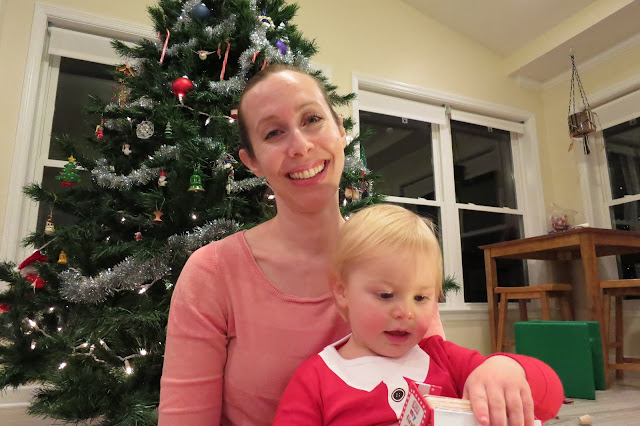 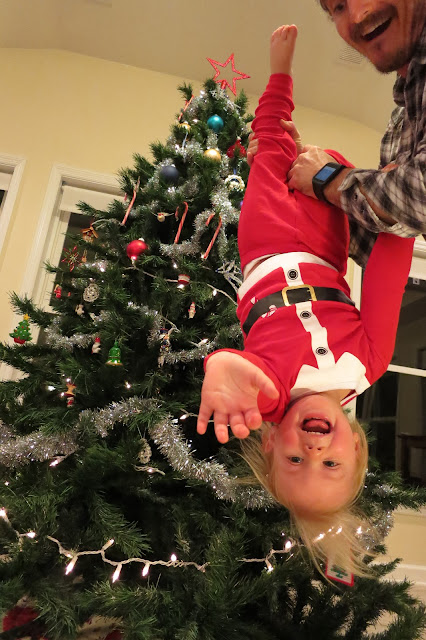 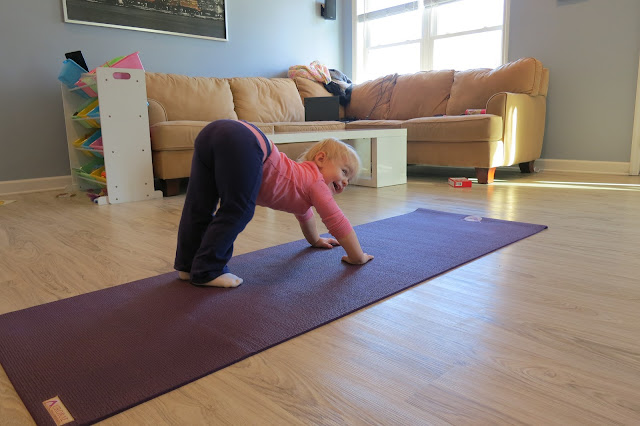 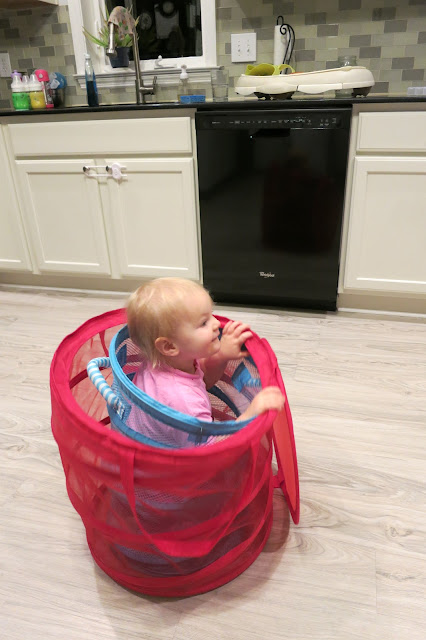 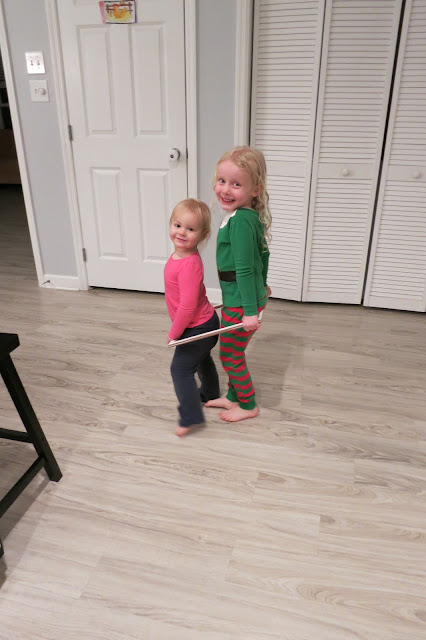 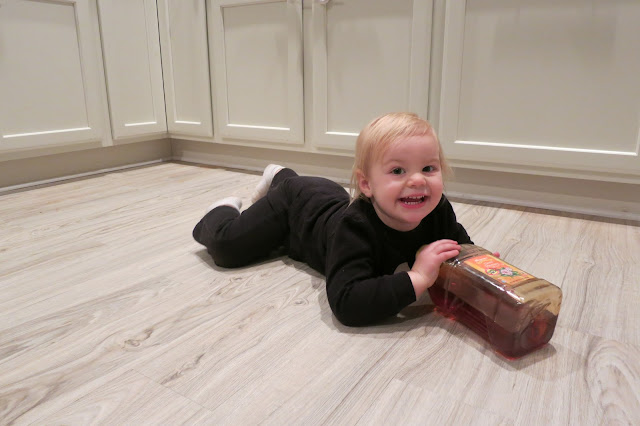 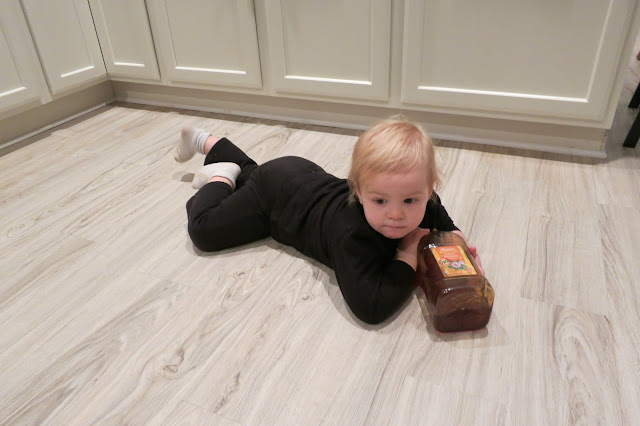 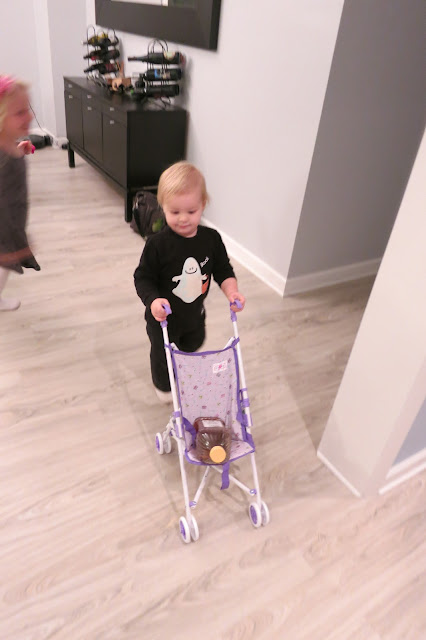 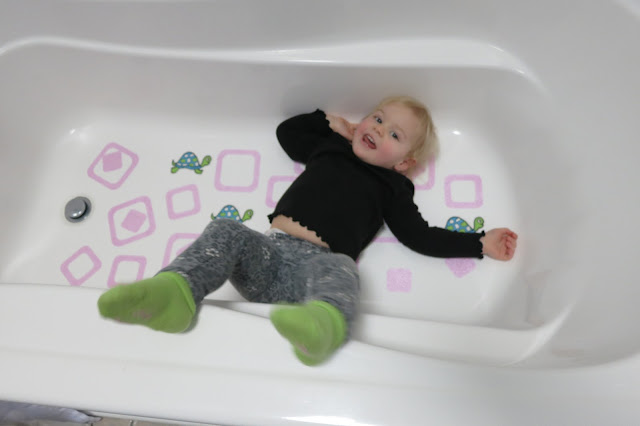 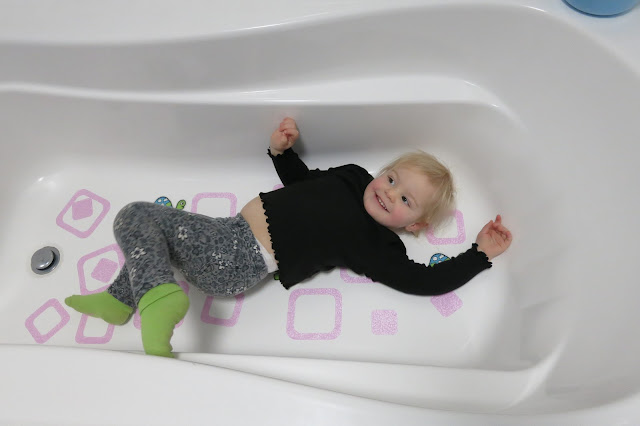