November really seemed to be marked by Josie's "projects", which basically are multi-day art projects she undertakes, which involve coloring, cutting, pasting, taping, etc. various pieces of paper into various other final forms. I like that she has projects that sustain her interest for that long (and hopefully provide some sense of accomplishment for her once she finally finishes them), but my favorite of these projects are her notes. She typically will draw a picture of a person (I think it's usually her), then adds declarations of love to it :) 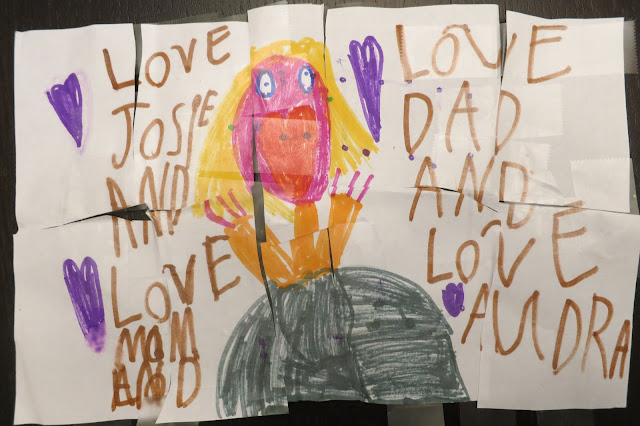 She also writes little love notes to us like this one, which reads "Our family is the worst." She seemed pretty happy with this one, so I can only hope that "worst" maybe isn't the word she meant...? :-\ 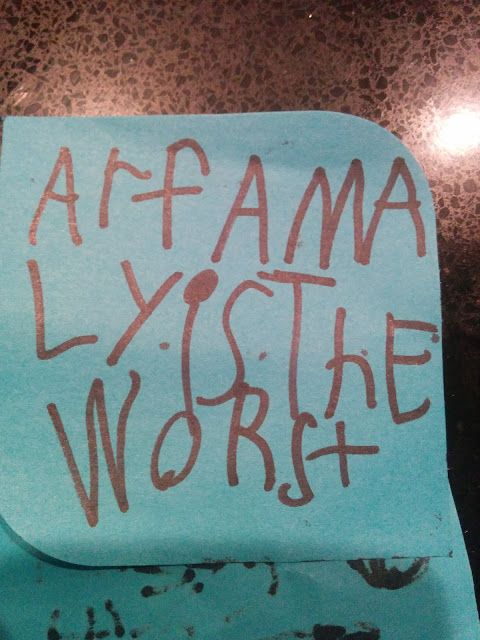 Then there are what I fondly refer to as "the yoyo notes". I'm pretty sure she had never even played with a yoyo at that point, and yet she wrote a plethora of notes about doing just that. Especially perplexing is that most of the yoyo notes are addressed to Ryan, who, again, has never played with a yoyo with her. The one below reads "I love you because you let me do the yoyo because you let go the yoyo. Love Josie. I love Daddy". She even got a stack of notecards from Chick-Fil-A as a "pay it forward" activity where she was supposed to write a happy note to various people and then give it to them. Instead, every.single.card read "I love you when you let me play with the yoyo and yarn", and then she gave them all to Ryan. For whatever reason, I think this is the funniest thing ever - I'm laughing now as I type this, and I laughed so hard I cried when he first read them :) 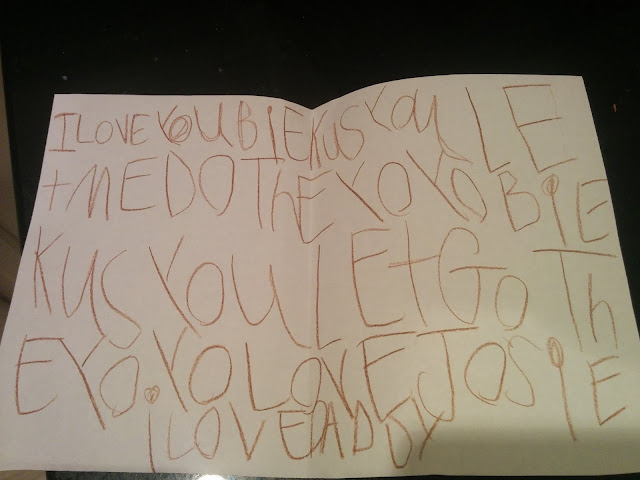 Josie is much more into story-telling now, and she's so amusing with how animated she gets when she tells story, with her different inflection and how she tries to build suspense. She also has started to put away her own clean clothes now as part of her chores, which is a big help for me, but I think she just likes being able to choose where things go. She also dressed herself in a white shirt, khaki jumper, and khaki pants for school one day, then told me she didn't want to wear all beige once we got to school - I burst out laughing, and told her she's definitely her daddy's daughter and then recounted to her the day that he (almost) wore an entirely brown outfit to work... but luckily decided against it when he saw that all of the browns didn't quite match once he got out into the sunlight.

Josie also prompted another haircut for herself, since she and one of her friends apparently were playing barber at school. It's unclear if Josie actually cut any of her hair, but we had a talk about what would happen if she cut her hair herself... mainly, it would be very short and I wouldn't be able to do an Elsa braid for her anymore ;) But she explained that she had done that since she wanted a haircut, so that's what we did the next weekend. After saying at first that she wanted it super short, then the same as mine, then super long, we settled on just getting a couple of inches off. It sadly seems to have stopped her hair from going into the awesome ringlets it was doing over the summer, but really seems to have helped her hair be less fluffy/frizzy overall, so I guess it balances out :) 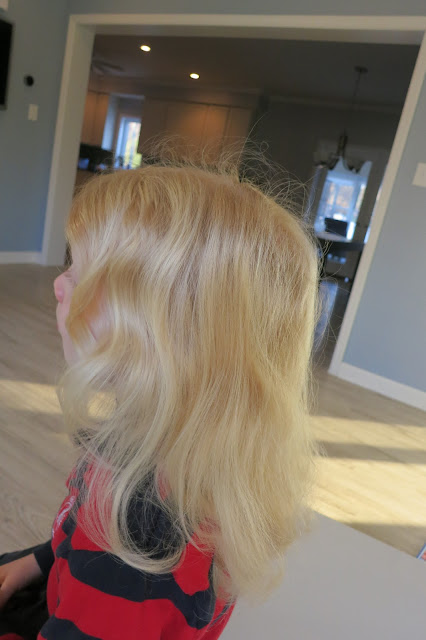 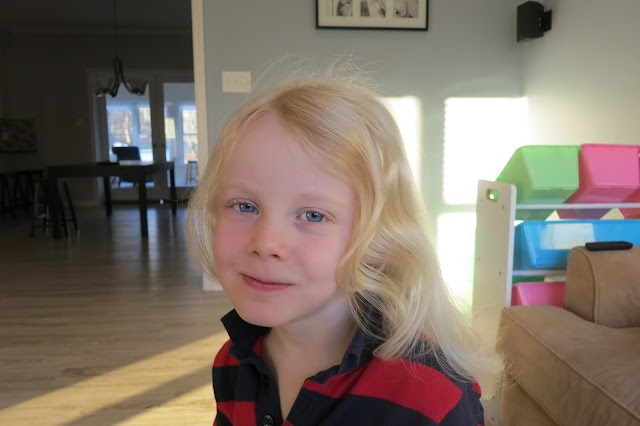 School is going well for Josie. We had her first parent-teacher conference of the year, and her teacher confirmed that Josie is doing very well, and she seemed impressed that Josie self-corrects already to fix things when they aren't quite right, which is apparently unusual for her age. Overall, she seems like she's right on track, and is advanced in certain areas (e.g., reading and writing), and her teacher said she'd like a class full of Josies, so that's always nice to hear :)

I also went to Josie's school for their Thanksgiving luncheon, and Josie was so excited to see me and was being very helpful in getting my plate and making sure I had enough food. And thank goodness the food was better this year! The traditional Thanksgiving fare was a little unrecognizable last year (and seemed to be mostly out of a can, even the turkey), so Ryan couldn't bring himself to go enjoy any turkey loaf this year. But the food was actually very good and fresh... including all the pie ;) 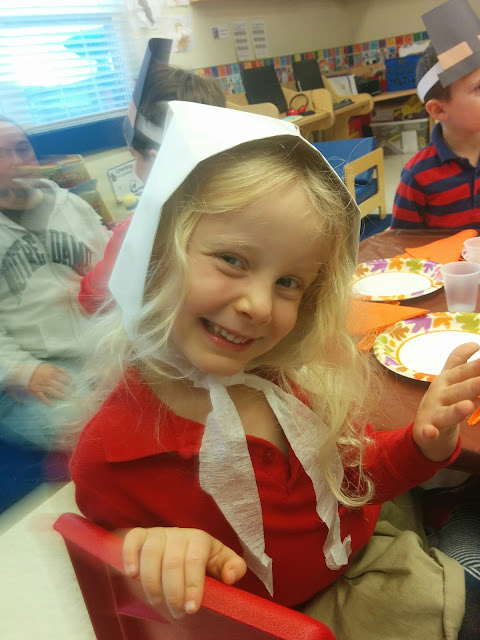 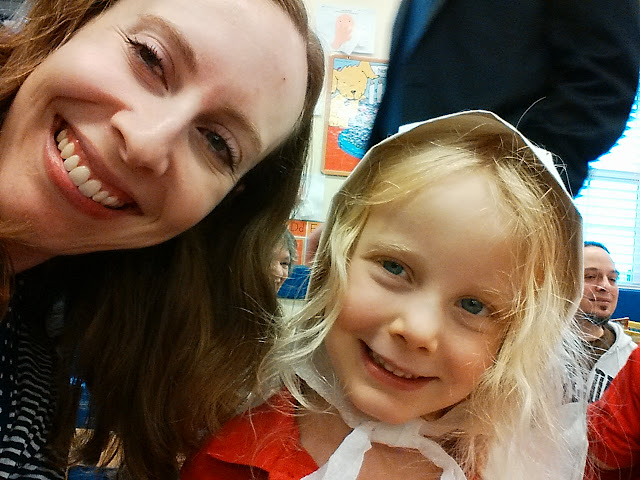 We had Thanksgiving at our house again this year, and with a larger crowd than normal since some of Ryan's family came in from out of state to join us this year. We had a final count of 17 for dinner (19 for dessert), and so we ended up with a 27- or 28-pound turkey, which turns out is quite large. We had to do a bit of squeezing to get it into the pan :) But everything turned out beautifully and the food and company were excellent. And we didn't even forget any dishes (like we normally seem to do), and overall, everything just seemed to go very smoothly. 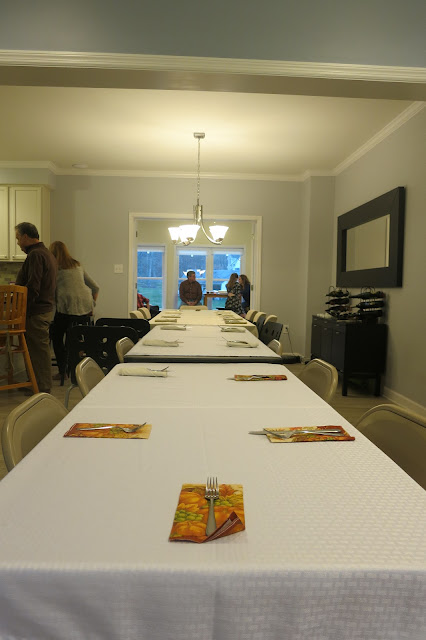 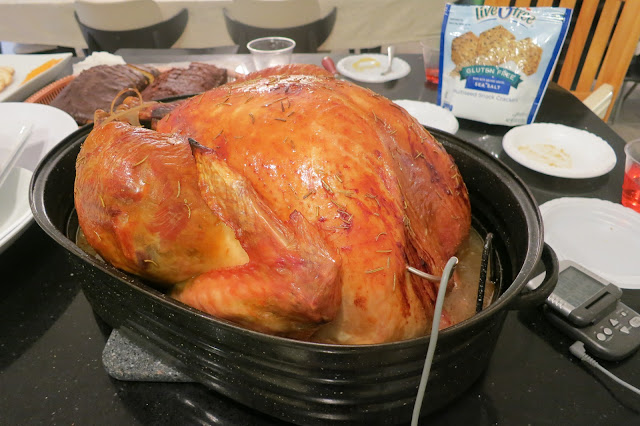 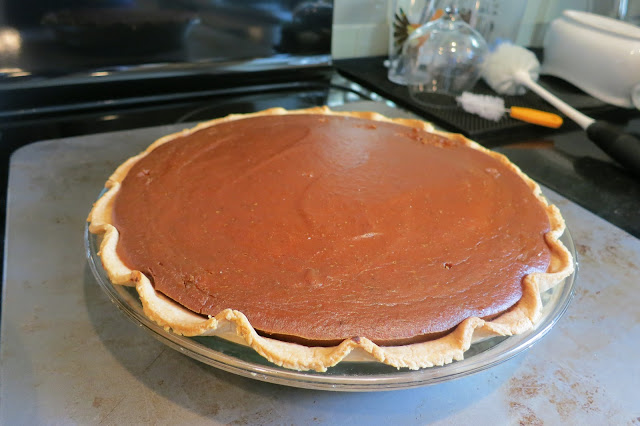 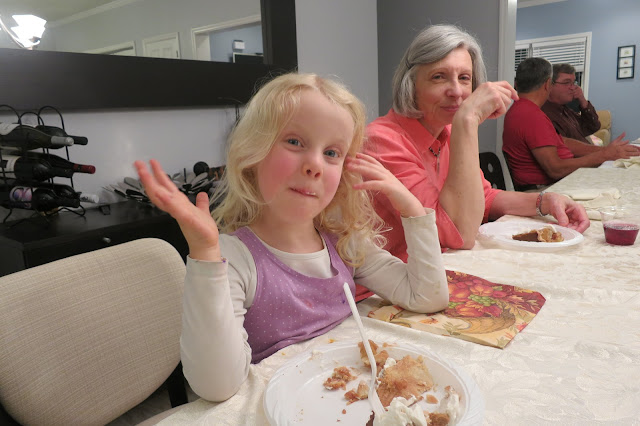 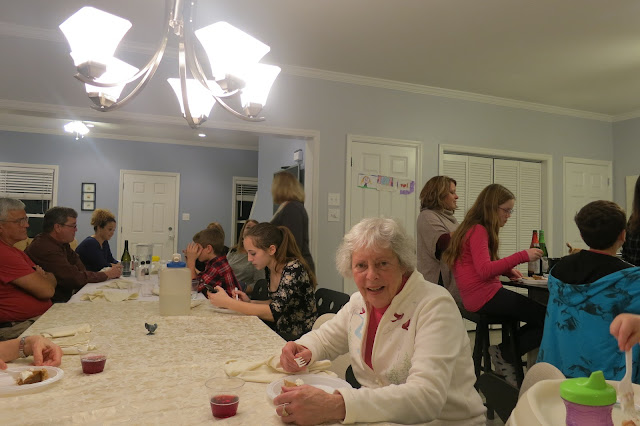 It has been unseasonably warm lately, so we've been able to spend more time outside than normal this time of year (well, at least without being all bundled up). We took some long walks (dodging a strangely large number of wolf spiders and grasshoppers on our path), got the kite up in the air (briefly), and admired the fact that the plants aren't quite dead yet. 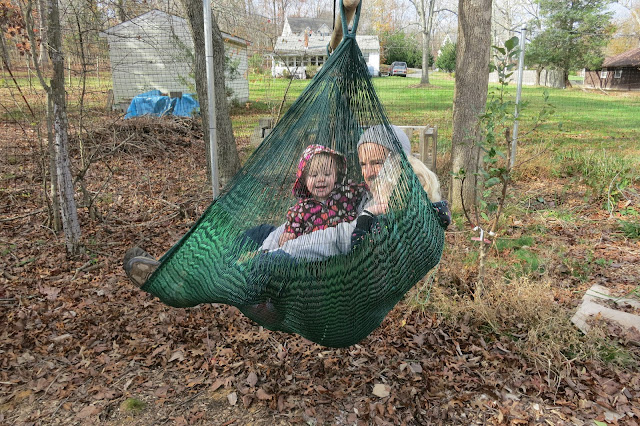 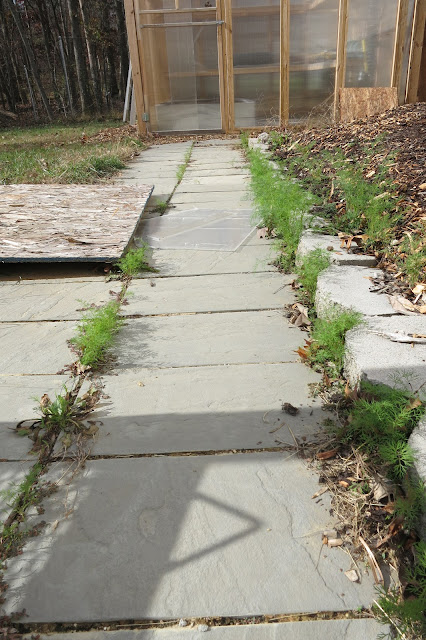 [This is what happens when we let dill go to seed] 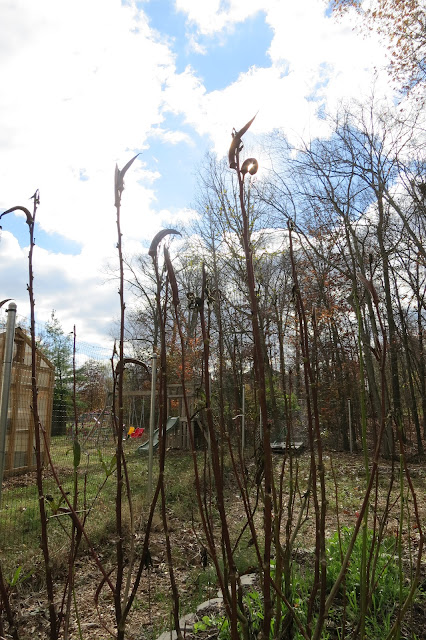 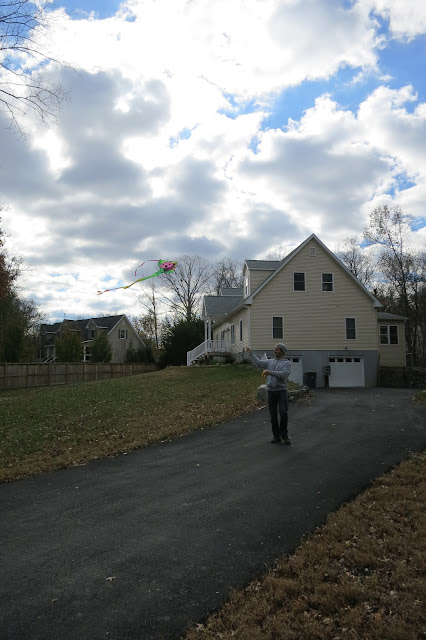 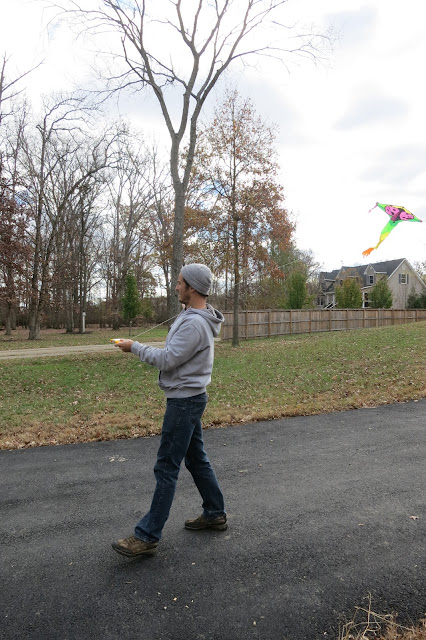 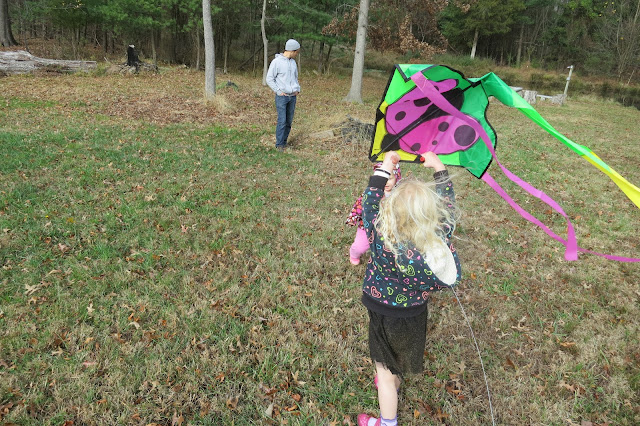 We also did a Mommy/Josie outing to a park to see the animals... not knowing that some of the animals we would see would be horses, as there was an AQHA show going on that day. Since the last AQHA show I competed at with Jane was at the same park (just before 9/11, so a world and a lifetime ago, it seems), it was an unexpectedly nostalgic visit for me. So Josie and I watched a couple of western pleasure classes and then wandered around to see the other animals. 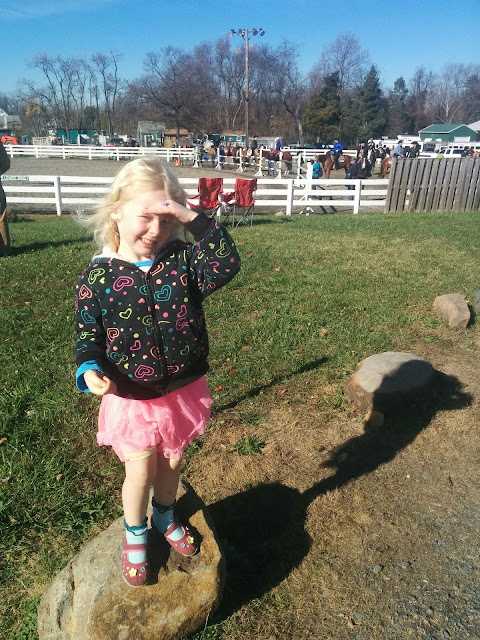 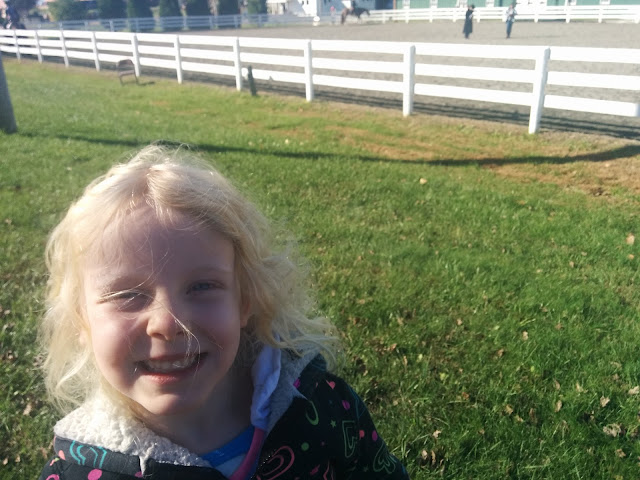 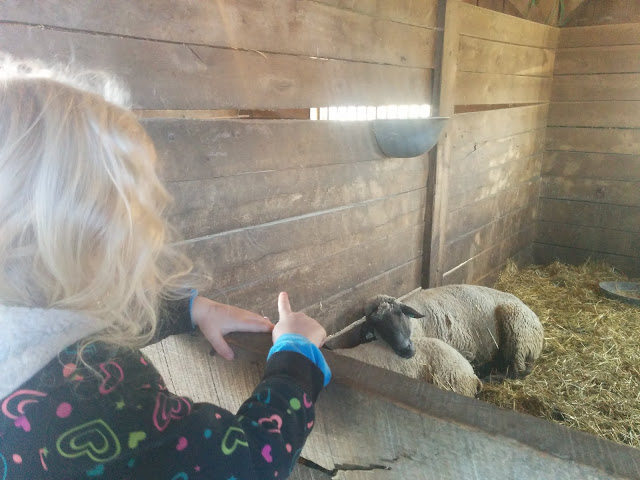 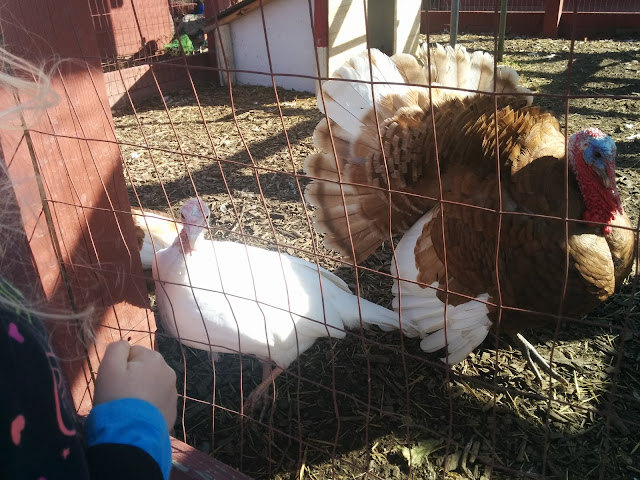 As I mentioned in Audra's post, we also went up to my mom's house in November. Josie was so excited to go there again, and ran all over the house with her Nana, and even climbed her first tree. Part of the reason we made the trip, though, was so that I could finally finish cleaning my stuff out from her house. I moved out 13 years ago, and yet I still had some horse stuff there...and, after 13 years, I guess I finally realized there was no point in holding onto it for longer since it's so unlikely I'm going to own a horse again anytime soon :( So I still have some riding gear I can use if/when I start leasing a horse again, but the blankets and saddle pads and several years' worth (!!) of Horse & Rider magazine are no more. 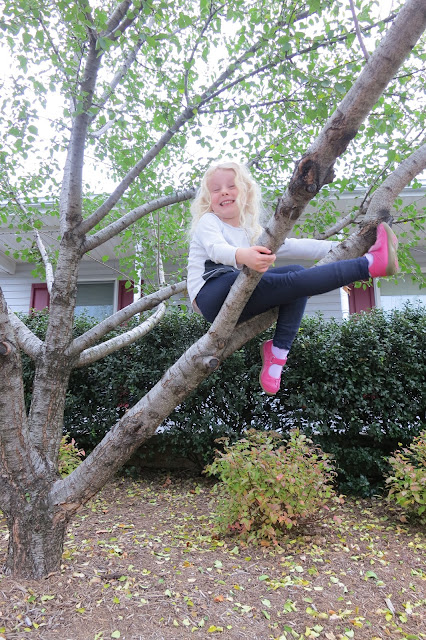 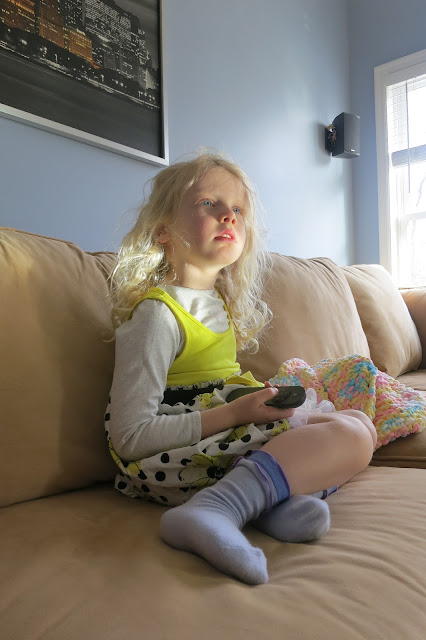 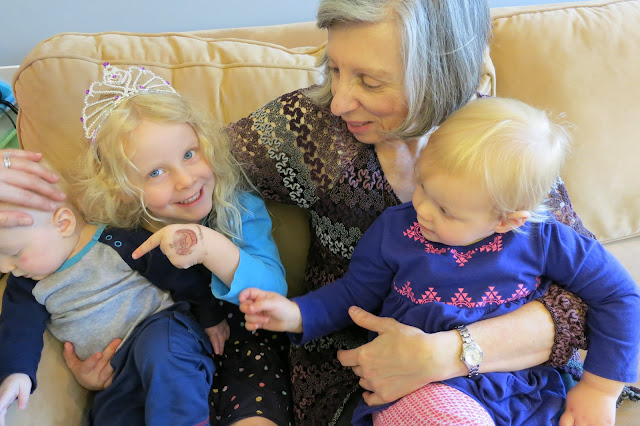 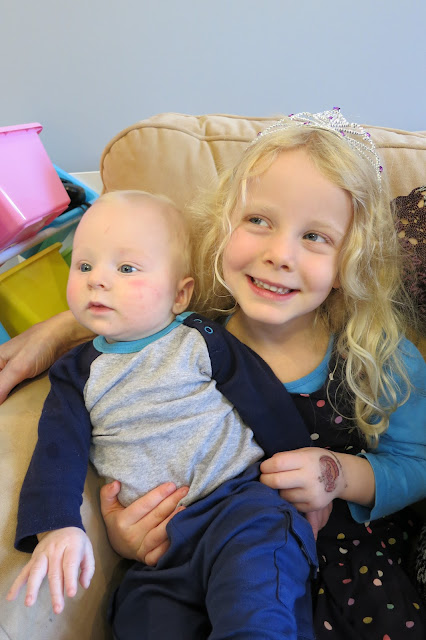 [With her baby cousin Benjamin :)] 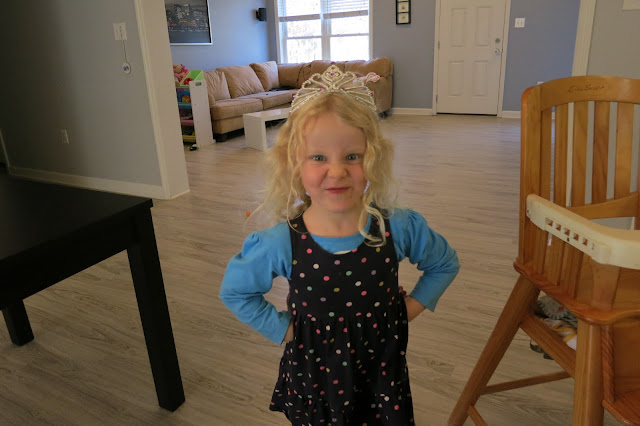