At last, the day Ryan and I had been looking forward to for over two years finally arrived: both girls are now attending the same school. Audra had been going to the same in-home daycare as Josie did for the first couple of years, but - as happened with Josie too - she started sending the message that she was ready to transition... mainly by biting. We had been looking to transition Audra in the fall, but that timeline moved up a bit when Audra bit another of the babies on her face. So the next day, after Josie's school first told us that they wouldn't have space until September (which prompted a flurry of research and discussion of moving them both to a different school), they ended up being able to have Audra start there on June 8th. 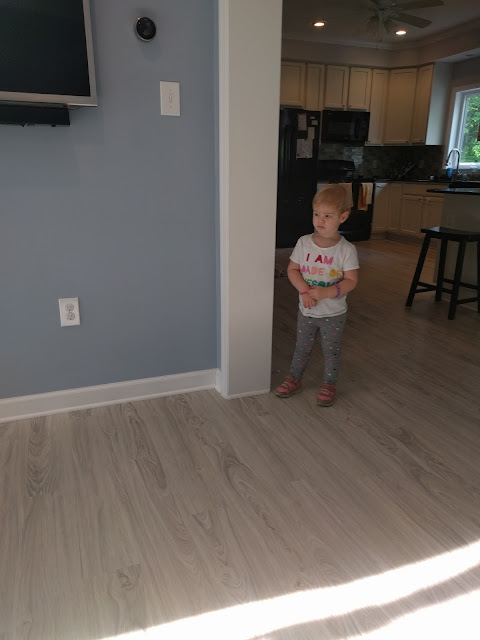 [Not too auspicious a start...] 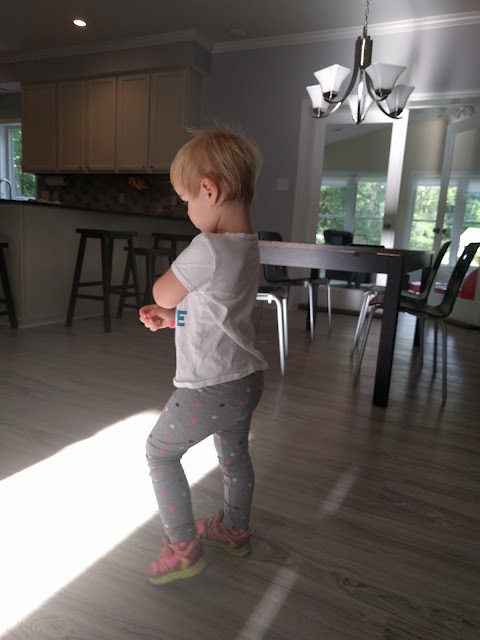 [... since this was the best I could get out of Audra for a "first day of school" picture]

I was very worried about Audra's transition (since Josie's was so rough - weeks of screaming, kicking fits at dropoff, and Audra tends to be even more dramatic), but she has actually been doing pretty well. She does get upset when Ryan drops her off, and whimpered and cried for the first half hour or so of the first few days, but her teachers are saying that she's bouncing back quicker now and doing really well... no longer comforting herself with finger sucking and hand washing (since she loves to play in the just-her-size sinks there), and now she's participating in circle time and playing with her new friends. She's even napping really well there, which was unexpected ;)

Josie also had a change at school this month, since she graduated from Pre-Kindergarten :) She was so excited, and insisted upon singing (or at least doing the hand motions) for the "surprise" graduation song she performed with her class during the ceremony. Besides that, it was a little anti-climactic, since she's still going to be in the same class through the rest of the summer, and will officially move into Kindergarten in the fall instead. And it doesn't really feel like that big of a transition, since while she will be commencing her years of formal schooling then, it will still be at the same school she's been for the last 2.5 years. Ah well... perhaps baby steps for her growing up is better for all of us anyway ;) 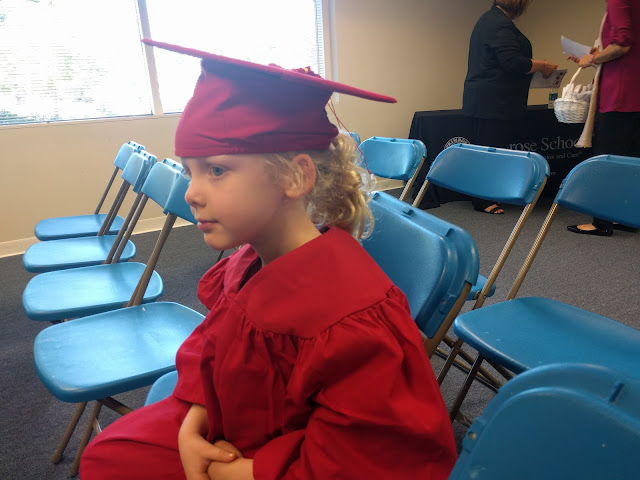 [Waiting her turn to line up] 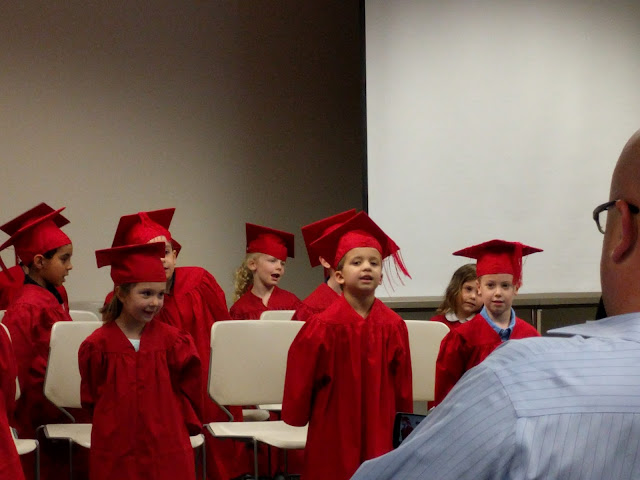 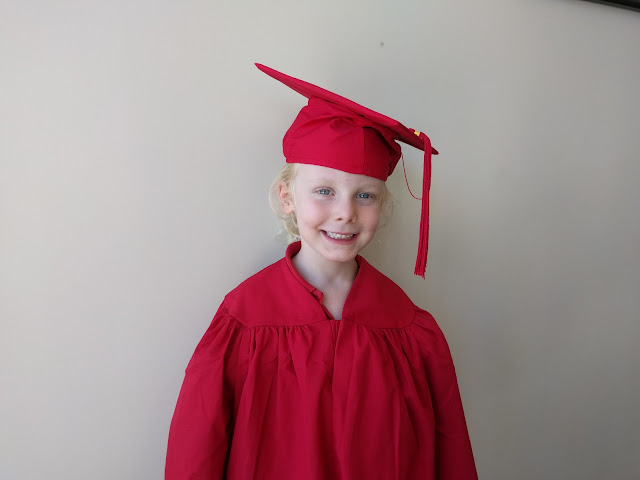 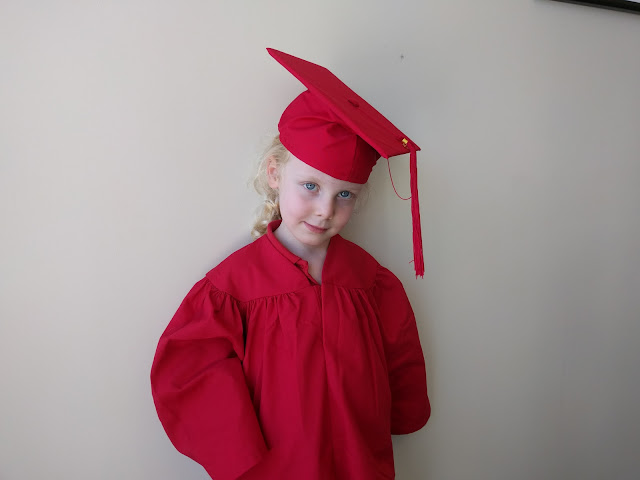 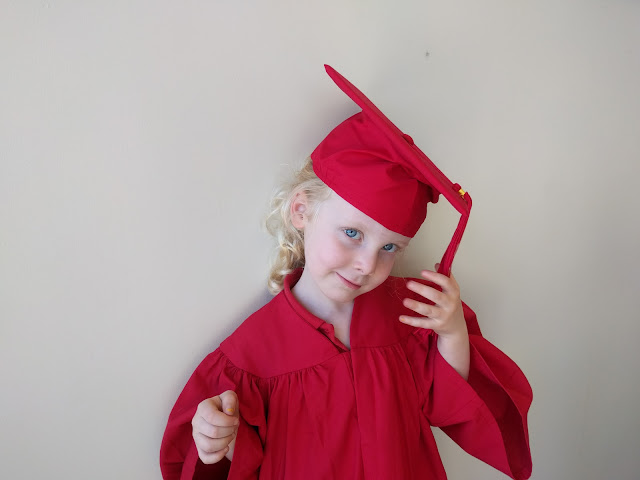 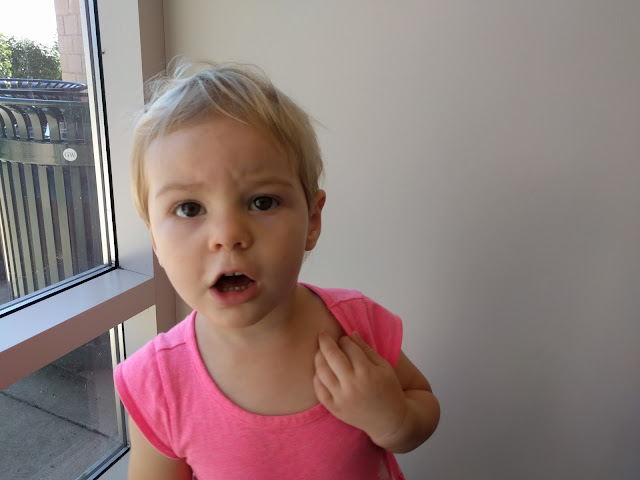 [Audra impatiently waiting for the picture-taking to be done]

So after that busy week (with Audra starting at school and Josie graduating), we took a short trip to a cabin in the Blue Ridge Mountains. It was perhaps a bit more rustic than we should have done with little kids (read: there were a lot of rather large bugs inside the cabin), and hiking is probably also not the best activity with little kids, but Josie got to go in a hot tub and we did step foot on the Appalachian Trail, so I guess we met our goals ;)

So yes, although it kind of seemed like a celebration for the end of the school year, given the timing, this was actually my 10-year anniversary present to Ryan, since he likes to hike. And so hike we did - we were out on the trail for probably about 45 minutes, and we spent probably 30 arduous minutes of that time cajoling the children to place each foot in front of the other. But it was beautiful out there, the girls got to climb a GIANT ROCK (so exciting!), we apparently turned around just in time to miss the dead fawn on the trail, and I got a good workout by swinging 35-lb weights (i.e., children) uphill, over rocks. So while it wasn't the most fun vacation I've ever been on, it really could have been worse :) 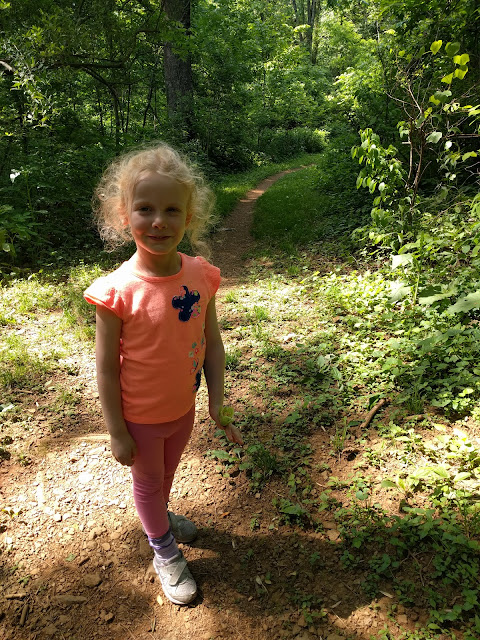 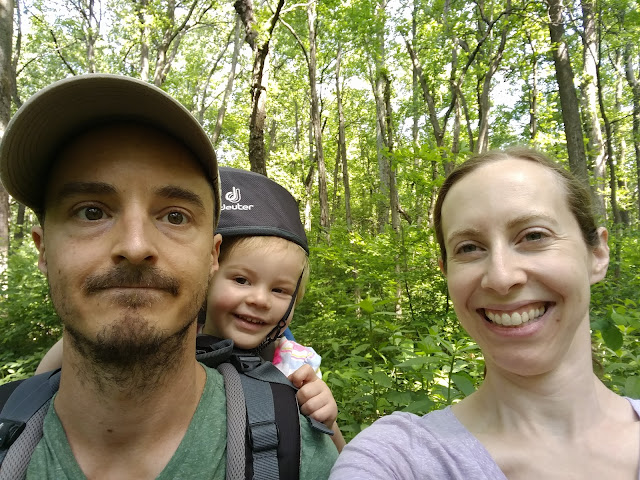 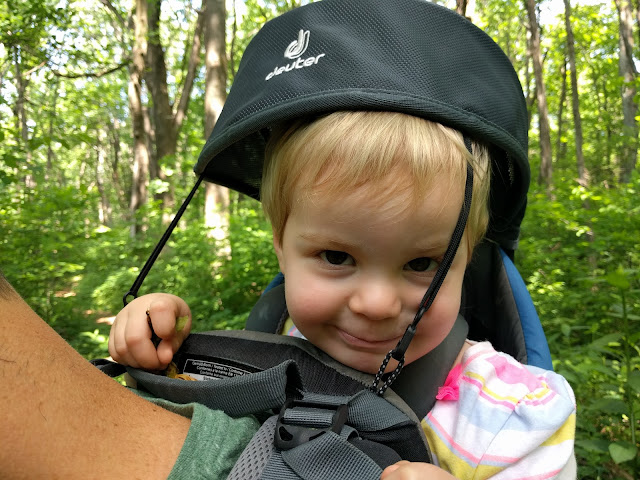 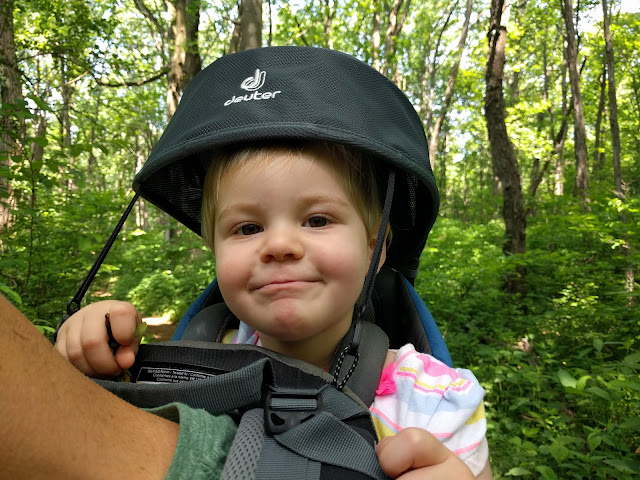 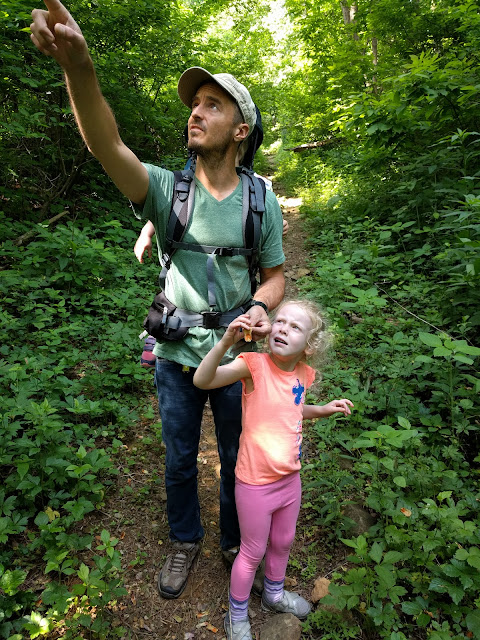 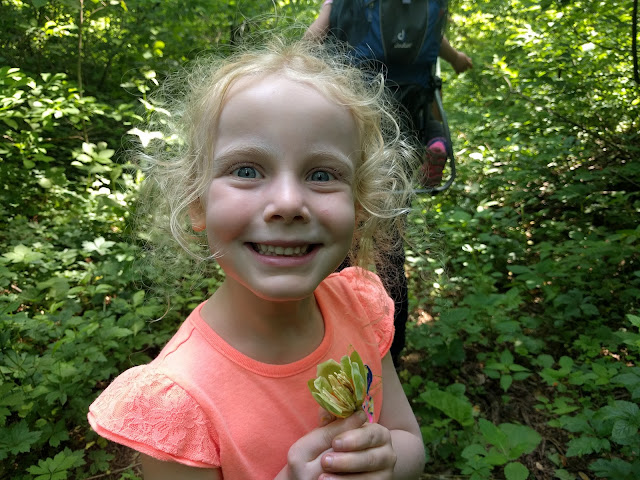 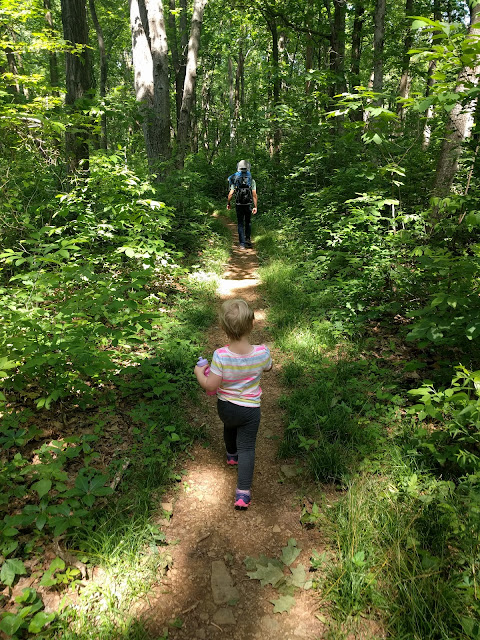 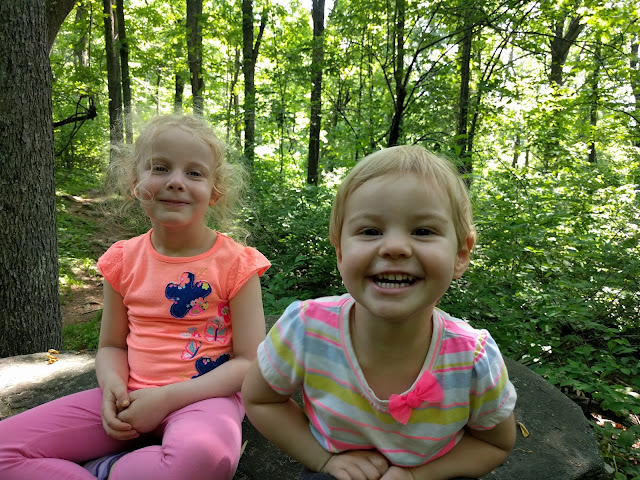 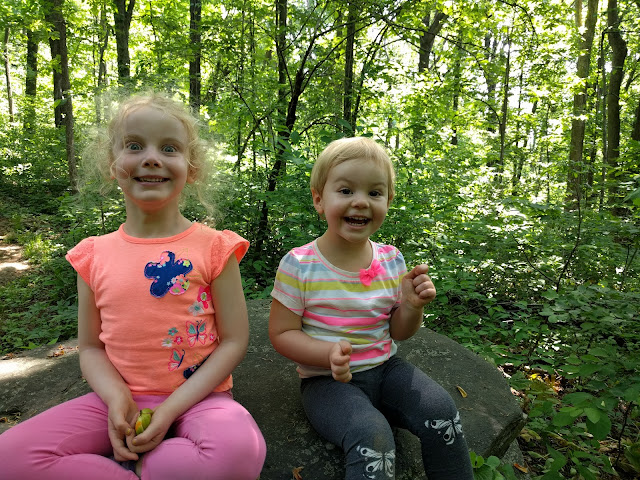 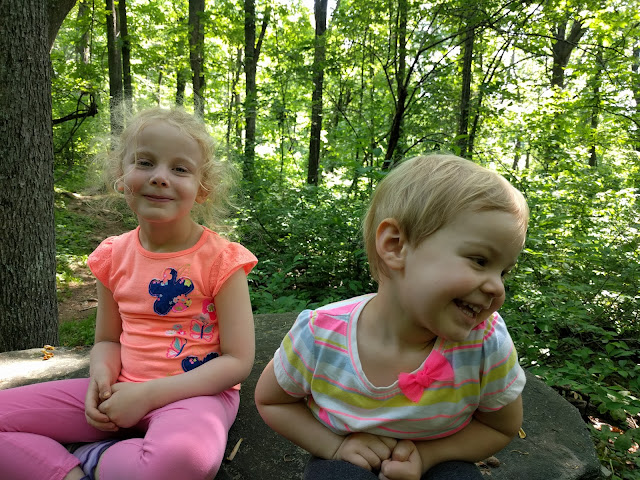