We went up to Vermont over Memorial Day weekend for a burial service for Ryan's grandpa (who passed away over the winter), 90th birthday party for Ryan's grandma, and general family reunion for Ryan's side of the family. Coming from a much smaller (and quieter ;) ) family, I was talking up all the cousins/friends Josie was going to make to her, but was a bit concerned about being overwhelmed myself. It ended up being a great (and not too overwhelming) trip, though, so maybe we'll try this again sometime ;) 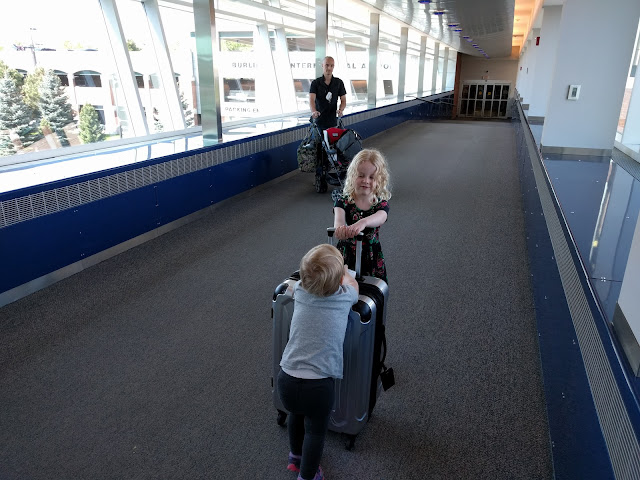 [The girls (somewhat) helping at the airport]

We stayed at the home of Ryan's Aunt Mary and Uncle Guy, which was really nice to get some extra time in with some of Ryan's family, apart from the "official" events. The girls especially loved staying with them... once they got over their initial shyness :) Although Audra said (and I quote), "I'm tired, I want to go home" the first couple of days, after that she just kept asking "Go Mary's house? See Tango? See Meg?". Tango and Meg are dogs, and are otherwise known as the highlight of the trip for Josie and Audra :)

We got in to Burlington in the morning, and after dropping off our stuff at Mary and Guy's, we went out to lunch, where we sat near some folks who were earnestly and energetically talking about Bernie Sanders. I was expecting some Bernie talk over the weekend, but just not quite so soon ;) (and that was before we saw the house that had "Bernie Sanders" painted in giant letters across the side of it).

The next day, we met up with Ryan's parents and wandered around downtown Burlington, which was cool and pretty... and very chill. I think I'm usually pretty crunchy, but no. Not in comparison to some of the people we saw in Burlington ;) And I got to practice my vocal fry impressions, since that seemed to be prevalent as well. I did really like it though, and if it weren't for its latitudinal location (i.e., too far into the wintery north), it would go on my short list of places where I wouldn't mind living :) 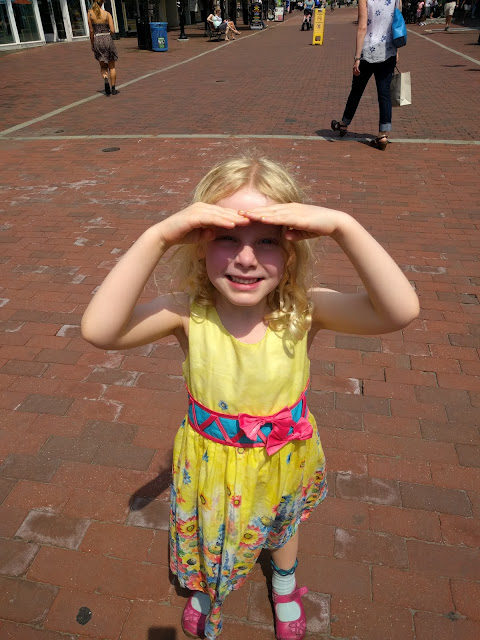 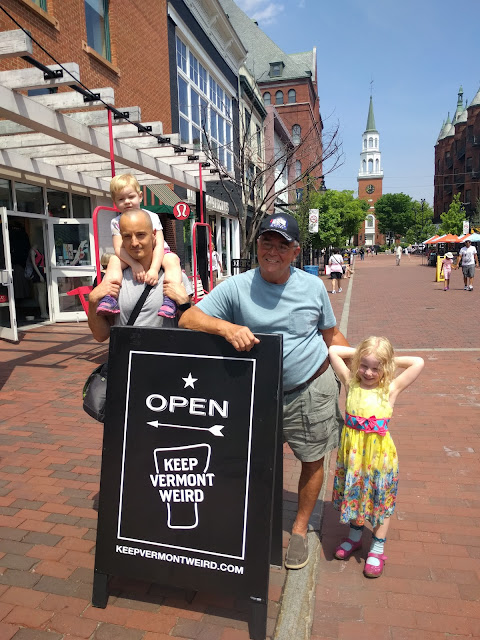 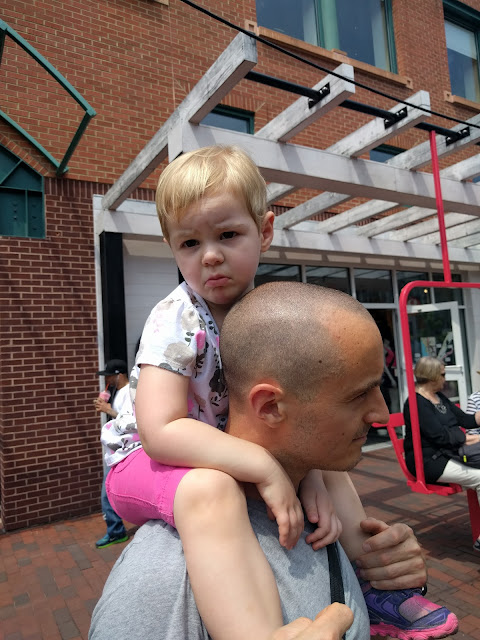 [I ruined Audra's day by declining to carry her] 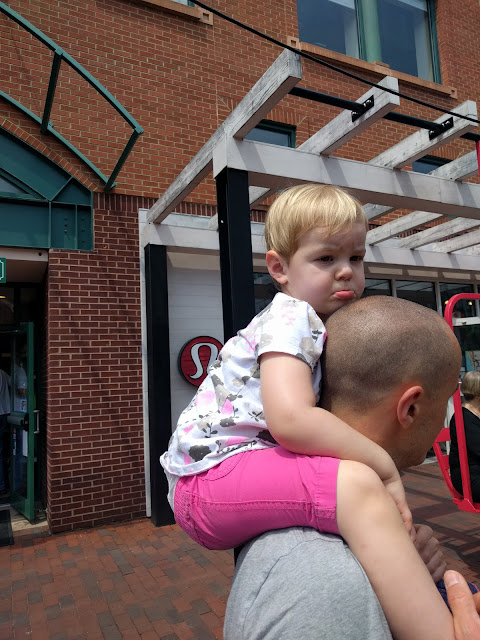 Audra may also have been pouting because she was a bit hungry, but it was interesting to see that she apparently starts sucking her fingers when she's tired, hungry, and/or insecure. While vacation is fun, the girls both seem to rely on their normal routines and it seemed in particular to shake Audra up a bit. Audra seemed a little more sensitive emotionally (in a sad and clingy way instead of her more normal screamy way), while Josie seemed just fine until the last day, when she asked when she'd be able to get her vitamin in the morning again... which I interpreted as shorthand for Josie asking for her normal routine back (of eating breakfast, brushing teeth, and getting a vitamin, always in that order). 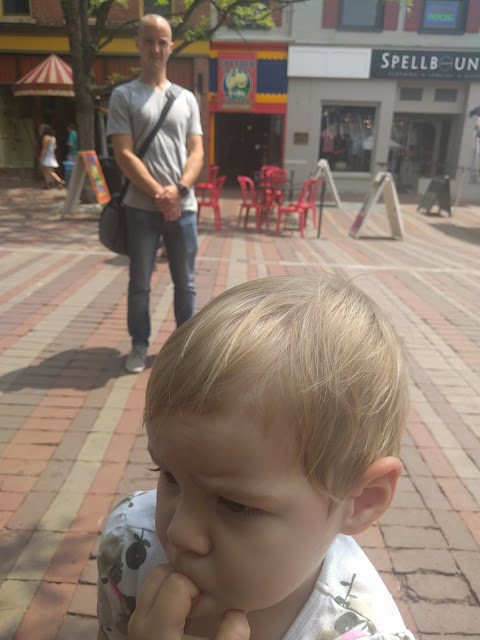 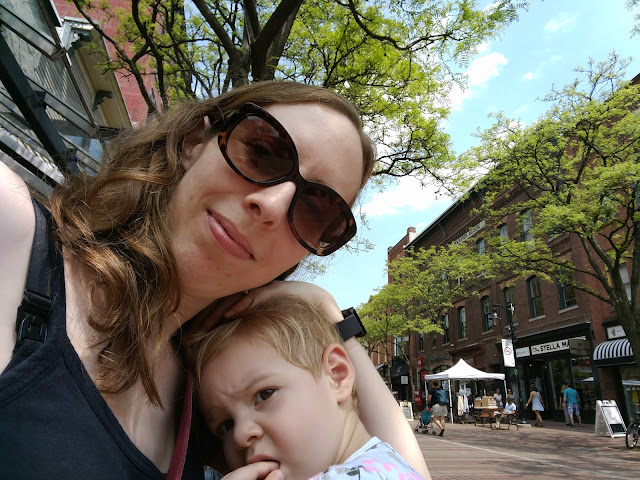 We went back for nap time after lunch, and Audra slept pretty well for being on vacation, given that her sleep tended to suffer a bit on previous trips. But she napped really well, and slept fine overnight, with the only problem being that she'd usually wake up in the wee hours of the morning to relocate herself. This is because she kept rolling off the bed, despite all of my attempts to block her. We were sleeping on a mattress on the floor, and I put pillows, a large storage container, and my suitcase around the mattress, and she still rolled off the mattress just about every night. It really wasn't that big of a deal, because it wasn't very far of a fall and she usually just kept sleeping... but she rolled onto the storage container a couple of nights too, and apparently sleeping crouched on her belly on top of the storage container wasn't that comfortable since it woke her up (but not before I woke up first and laughed at her). 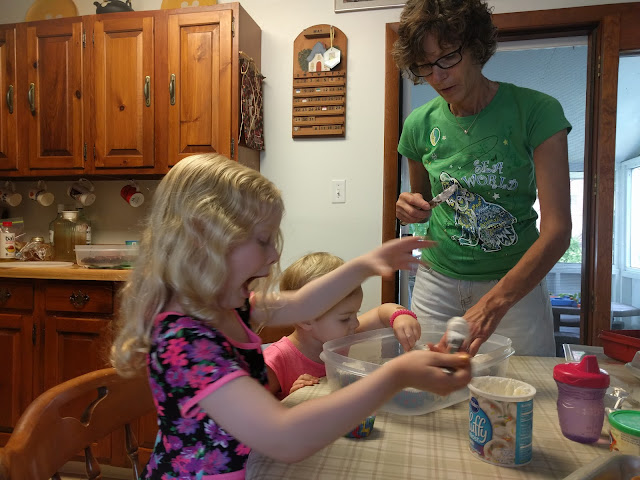 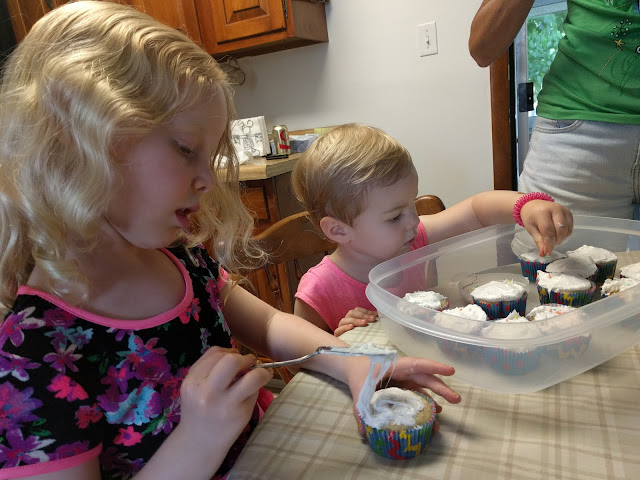 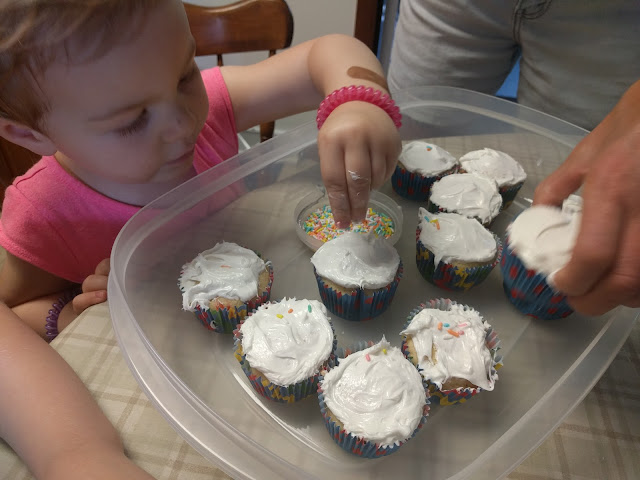 Then it was Saturday, and we ventured out to eat lunch at a restaurant (ok, a bar, and I get the impression it is less socially acceptable to bring kids into a bar there than it is at home...oops), and then we surprised the kids with VACATION ICE CREAM. We don't give Josie too much advance warning about ice cream because then she gets so excited that I'm afraid she's going to hyperventilate (only partially joking), but then she chose to get sorbet anyway... and still wanted it in an ice cream cone... with M&Ms on it (which I guess is weird?). But Josie ate most of the sorbet, and Audra helped with the cone and M&Ms, and they were both happy with it. 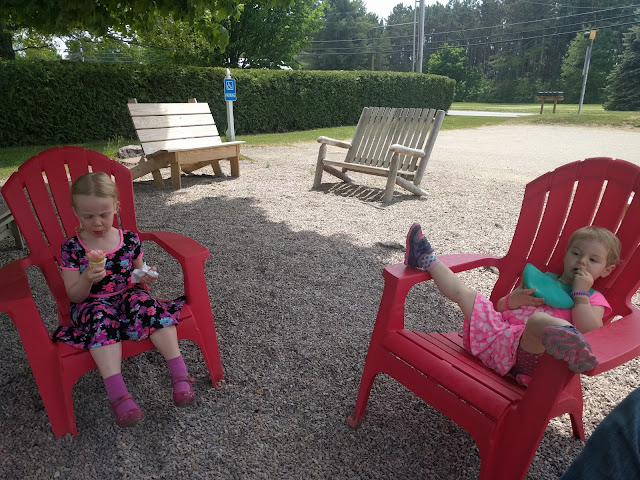 Ryan took Josie to his grandpa's burial service after that, while Audra and I did naptime. Josie apparently was fine for the burial, except she had many, many questions for Ryan... finally culminating with her whispering to him "Daddy, are we in heaven??" when they were at the cemetery, and Ryan answering "Yes, now be quiet". ;)

We then met up with the rest of the family for a party at Ryan's Aunt Cheryl's house, where Josie had apparently made fast friends with several of her cousins.... although I apparently didn't get any pictures of ANY of the cousins, only of Josie and Audra after just about everyone else had left. 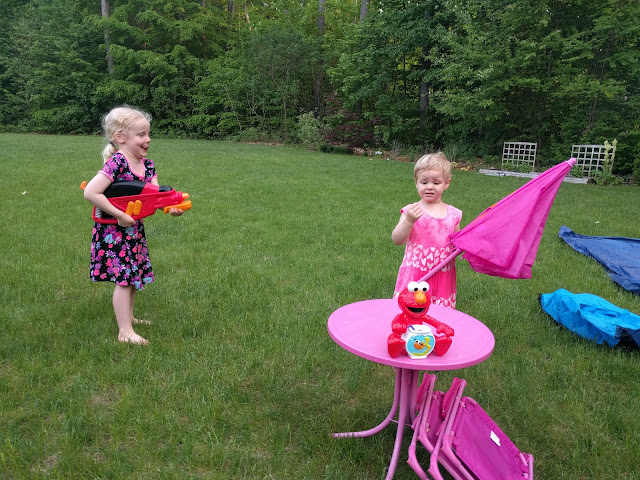 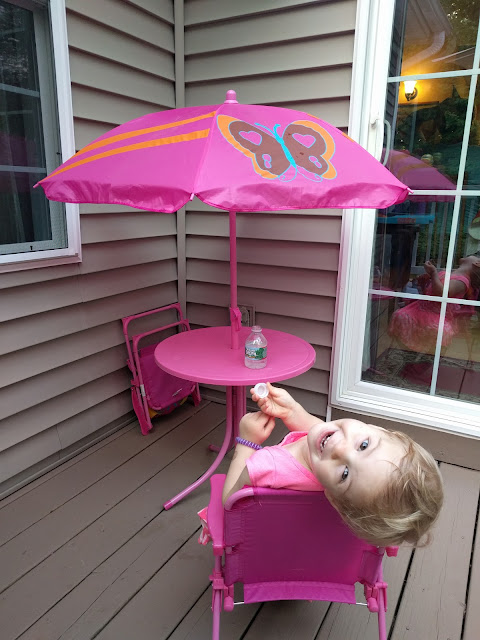 The next day, Audra threw her first (and only) sizable tantrum of the trip. We were so impressed with how well both girls were behaving while we stayed with Ryan's family, especially given Audra's predilection for screaming tantrums at home, at least. But yes - after skipping joyfully through the (empty) aisles of the grocery store, Audra was not ready to call an end to the fun when I wanted her to, and she ended up on the floor. Like she does. 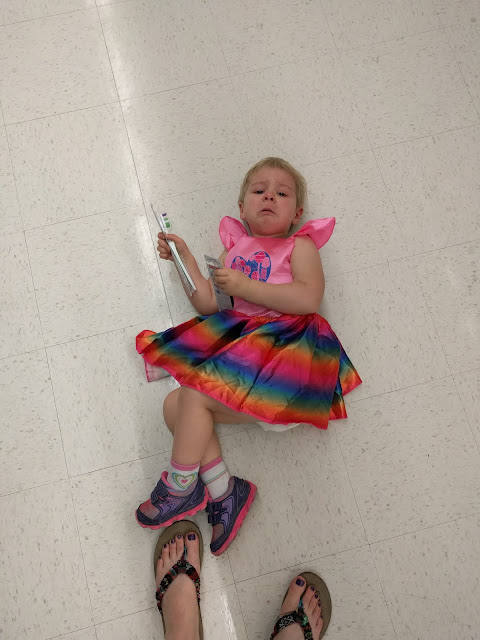 Then, after a break for naptime (where Audra actually fell asleep for me at "daycare naptime" (i.e., 12:30) instead of "home naptime" (3ish)), it was off to the park for Ryan's grandma's 90th birthday party. It did rain almost the whole time we were there, but no matter. Kids don't melt, and clothes are washable, so off they went to play in the rain. Note: I am not claiming any responsibility for Josie's and Audra's outfits. 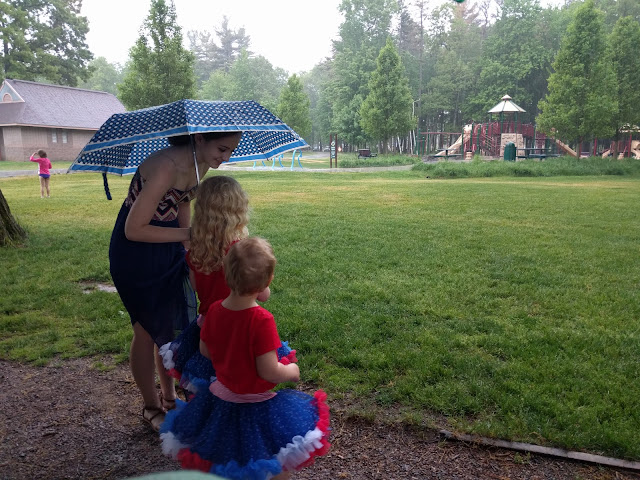 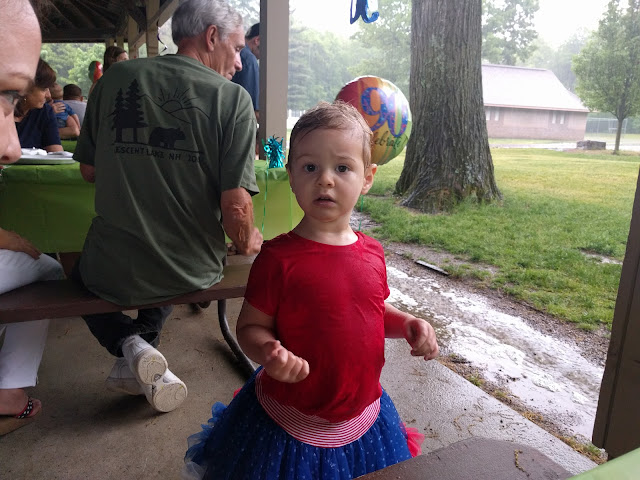 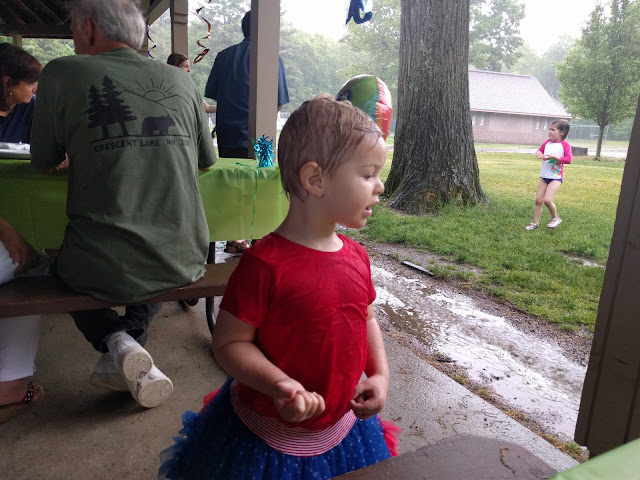 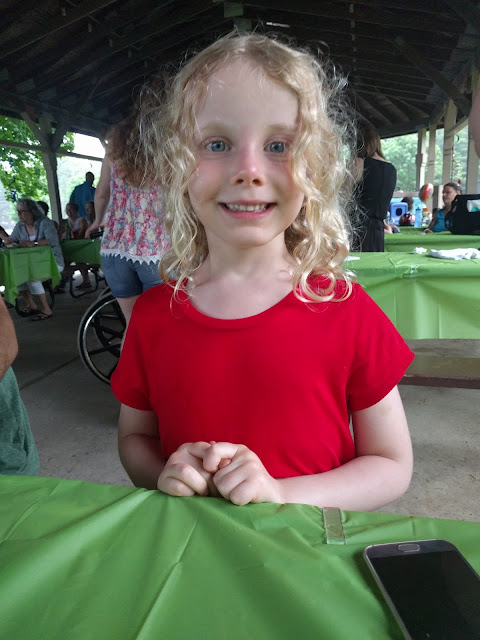 [Poor Josie Red Nose - Audra had (accidentally, for once) kicked her in the nose] 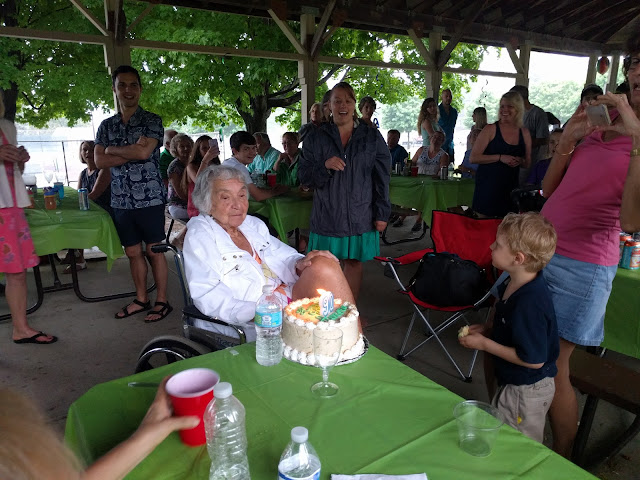 [Ryan's grandma: the grande dame of the extended family]

The next day (Memorial Day) was already our last full day in Vermont. We headed out to The Skinny Pancake (which is apparently owned by a relative - he was introduced to me as "Skinny Pancake Guy", although I assume he has a regular name as well ;)), where we gorged ourselves on Nutella pancakes. 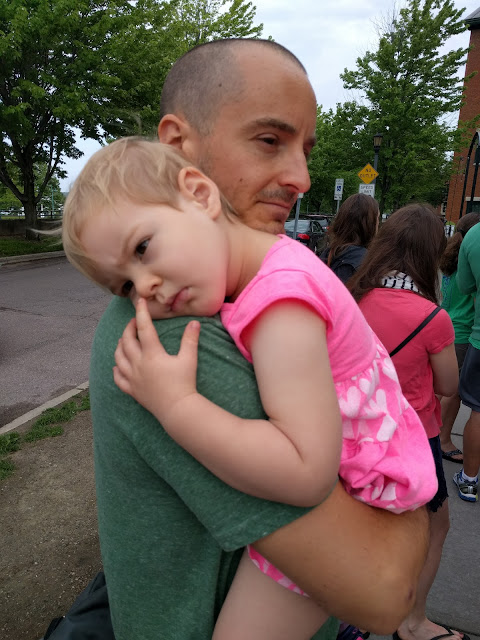 [Waiting in line to get in, even first thing in the morning on a holiday] 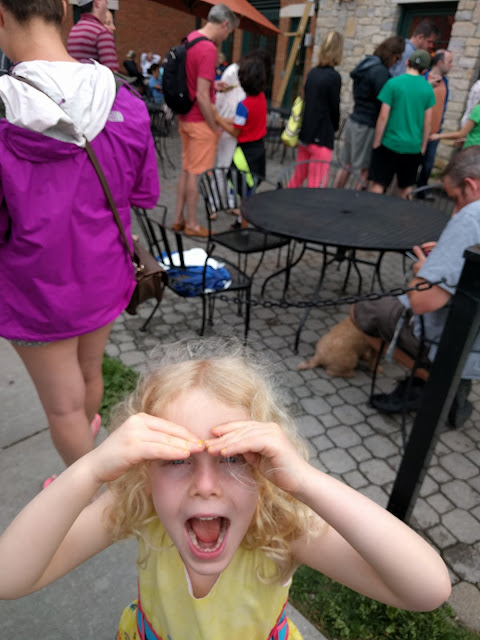 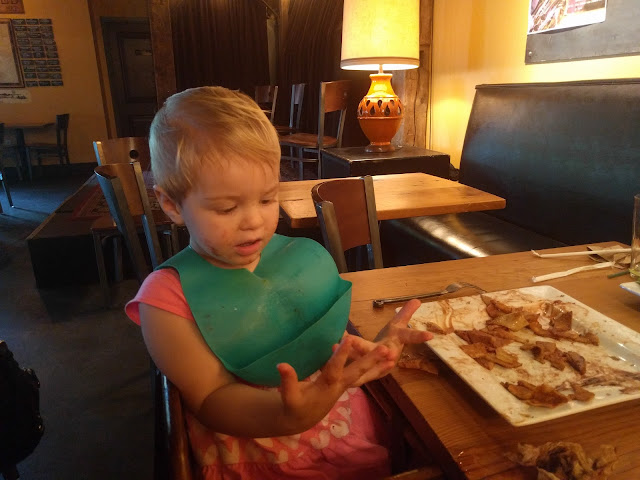 [She seems to have realized she was dirty] 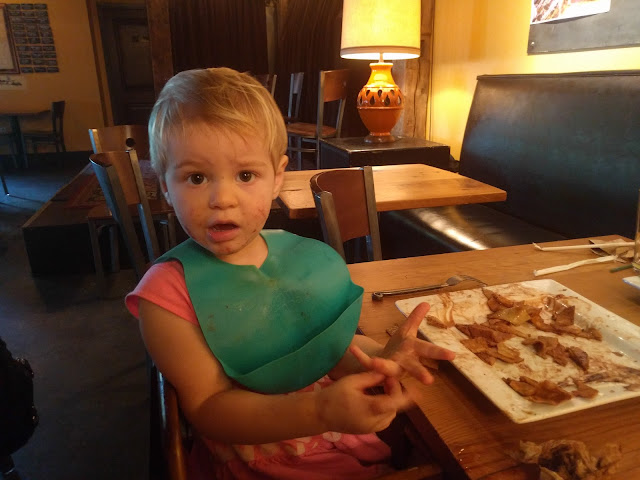 We went down to the waterfront after that to try to walk off some of our breakfast, and the girls were delighted to see some ducks up close and personal. Josie had many questions about all the boats at the marina, and was really quite determined to take one of them. Audra just tried to walk directly into the water - I guess playing in the rain fully clothed the day before had made her more bold in that regard ;) 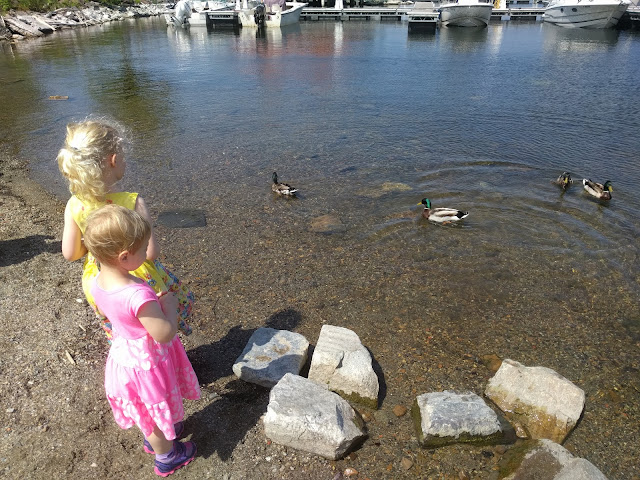 After naptime, Audra and I headed out to the house one of Ryan's other uncles was renting for the weekend, where Josie had been spending Audra's naptime quietly building a fairy house in the sand. The water was a bit too cold (for us, at least) to go swimming in, but the girls still had plenty of fun playing in the sand and going ankle-deep in the water. 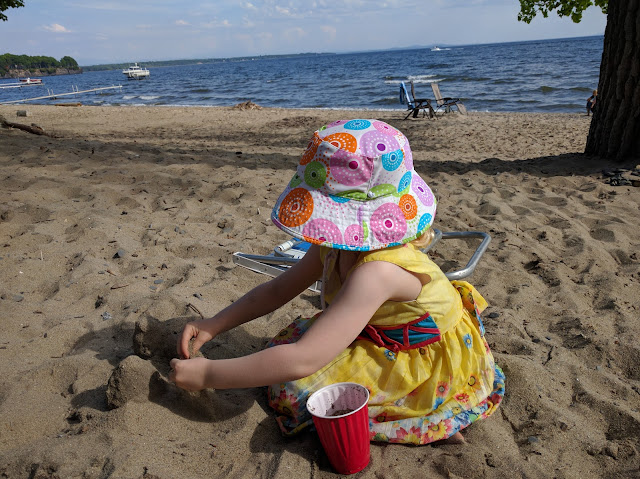 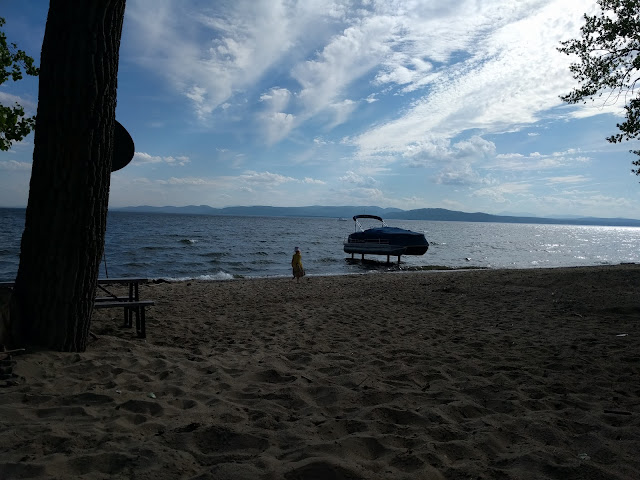 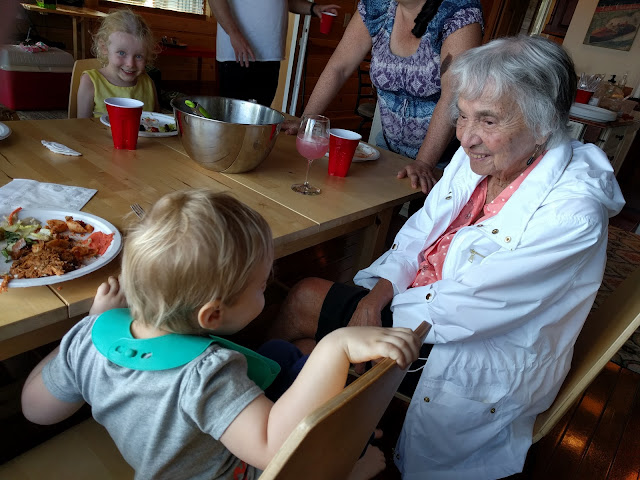 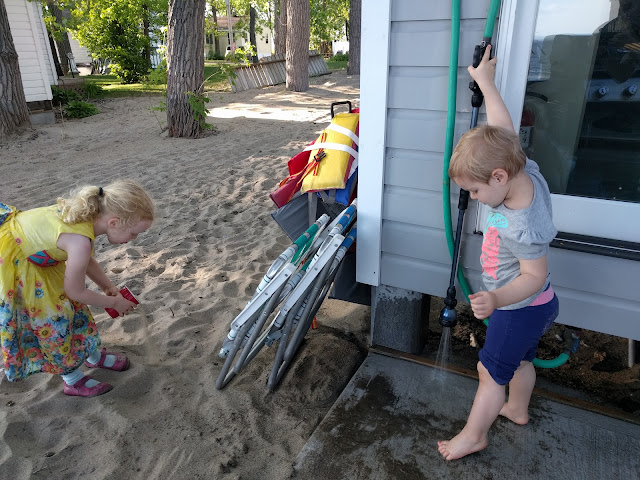 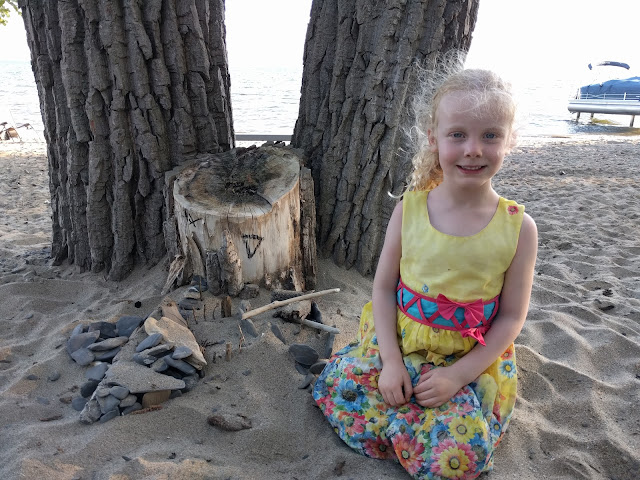 [Josie and her fairy house]

And that was our trip to Vermont. We had a lovely time, and yet I still told Ryan on the way home that I didn't want to make the trip again for another couple of years. The drive is too long for our kids still, and I think we need a couple more years before Audra will be able to handle the plane trip again. This was her first trip with her own seat, and keeping her sitting relatively quietly with her seatbelt on was not for the faint of heart. She did mostly well for both flights, but especially on the way home, I felt like we were teetering on the edge of disaster as I tried to head off each tantrum (or collapse and slow slide down the seat) with new or different toys and activities. Let's just say I'm still recovering from that ;)
at 4:17 PM