It's not often when I wish we could just scrap an entire week, but yeah. Last week was pretty rough. Audra appeared to still be in the throes of some pretty intense separation anxiety, so she only wanted to be held, and usually only by me - which is sort of a problem, since she's pretty heavy and not exactly convenient for getting anything else done. She basically spent the entire weekend in the carrier, and even then there were some rough screaming fits. I love Audra tremendously, but I'm not going to sugarcoat it: we're having a hard time at the moment. She is just a pretty intense baby, and loud, and strong, and it's sometimes hard to remember that she is only a baby with little baby needs, it's not going to be like this forever, and she's not out to get us. The book I'm reading likens mothering to magnets - where there can be a lot of tension if one of the magnets is resisting the other, and it's just so much easier to let the magnets snap together. I sometimes still have a lot of problems "snapping together" with Audra, and last week especially was one with a lot of tension, with stress from Audra's fussiness, Josie's sudden descent into a 3-year-old Attitude, work stuff, and a whole week of not being able to pump enough each day for Audra (which had never happened before the last couple of weeks, let alone coming up short every day for a week).

Things didn't seem quite as dire after the weekend though, and I'm hoping we're on an upswing again - our attitudes seem a lot better, and I also took some steps to try to dial down my stress. For instance, while a clean house helps me maintain my grip on sanity, I finally recognized that I wasn't able to keep up with it anyway, so having tasks on my to-do list that were weeks overdue wasn't helping my mental state either. So I deleted them all, and will now just clean whenever I'm able to rather than trying to adhere to my "ideal" weekly cleaning schedule. I also started pumping over the weekend so that I have a buffer going into the week, since it basically became a self-fulfilling prophecy last week - I worried that I wasn't able to pump enough, which then impacted my ability to pump, which then led to me not being able to pump enough. So now I have about 1.5 bottles of buffer in the fridge midway through the week, I'm drinking more water, and I also have some fenugreek pills on hand now in case I need to start taking those to try to bump up my supply again.

Audra is much more stable while sitting now, which is really helpful since she's not toppling over and getting upset about that. She is also sick AGAIN though, and has been dealing with a lot of congestion and coughing overnight, although at least she only had one night of bad croupy coughing. We've changed up our evening routine too, which has led to sort of varied results. Ryan is now going on his evening walk with Audra while Josie and I eat dinner (previously he would just try to hold Audra or walk around the yard vs going out on his 30-min walk), so she's sometimes getting a short nap in then. I had been nursing her around 6:20-6:30pm and she would go to sleep within minutes, I would stay with her for an hour to get her through her first couple of sleep cycles, then would sneak out to take a shower, prepare for the next day, etc., until she woke again (sometimes after an hour, sometimes within 10 minutes). Now I'm nursing her around 7pm... and lately she has been popping right back up afterwards, happy and raring to go. And although I was frustrated at first with this change, I quickly realized that it's actually not so bad - I just bring her back out to spend time with Josie (which makes them both happy), I go take a shower or get "bonus time" with both kids so Ryan can get some other stuff done, and then I either just go to bed with her when she starts getting fussy again (which removes any stress for me to try to stay awake so I can sneak out later), or Ryan takes her on a walk if she still won't nurse down, so that way I get a little sleep in before he brings me back a sleepy baby. 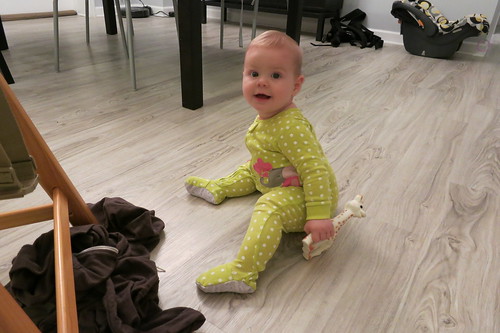 [Pretty excited about being out of bed again] 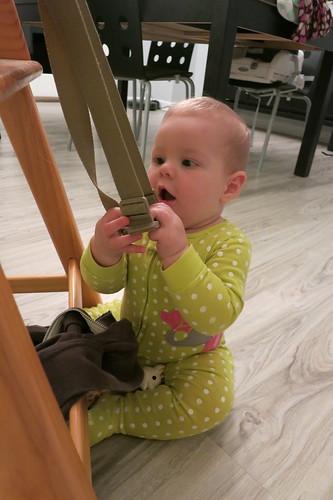 As far as her actual sleep, there was one night where she only woke 3 times, but every other night was many times... countless times, in fact. Which is good! It means I actually just gave up on counting, which - following the theme for this week - leads to less stress for me :) The silver lining for this week is that Audra rolled away from me almost every time she fell asleep, which meant that I could shift to my back to sleep comfortably without worrying about waking her. Turns out this is a big deal to me. I've actually been getting a decent (albeit interrupted) amount of sleep anyway, and being able to sleep most of the night on my back again makes me very happy. She also fell back asleep on her own a few times, which made me come to the realization that she really only falls asleep (at home, at least - daycare has their own methods) with nursing, being in the carrier, or on her own. I don't even try to pat her, rock her, or offer her the pacifier anymore since those all seem to just make her mad. Hopefully she'll eventually consent to being patted or rocked to sleep (if she even needs help), but we'll deal with that another day. :)

On a lark, we decided to take both kids to an animal park/pumpkin patch last weekend, which went really well! We went in the morning, and since Audra was ready for a nap before we left, she pretty promptly passed out in the carrier and slept through most of our visit. She woke up just in time for lunch, so I nursed her and then she grabbed some of my hamburger bun out of my hand (she's remarkably quick!), so that - and a cucumber - kept her quite entertained while we all ate. 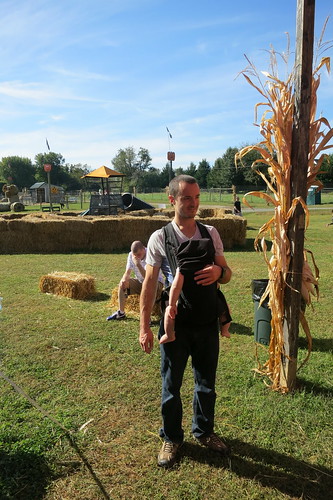 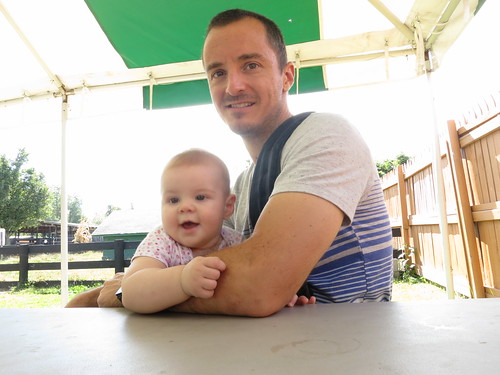 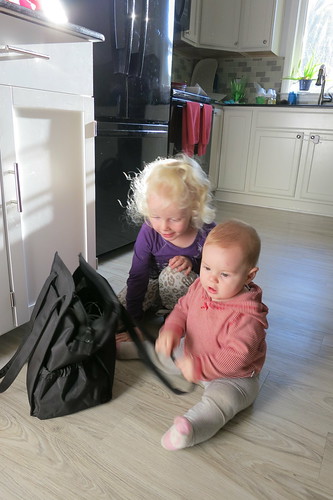 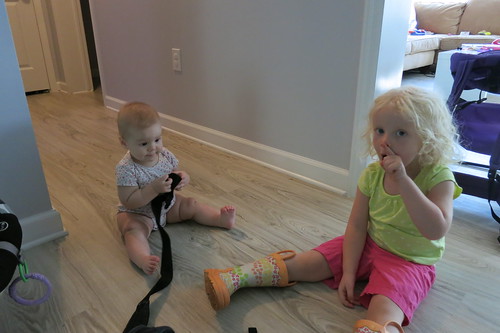