Audra really got into exploring this week. Before, she would venture out a little ways from wherever we set her down but would really only move with a purpose when she caught sight of me, but this week, she chased down Josie and Ryan too, and just headed off to explore whenever she felt like it. It's so funny to hear her coming now, with her little baby hands slapping against the floor, and then her happy face peeking around the doorframes :) Unfortunately, one of her favorite rooms right now is the bathroom, which I don't think is exactly the best play area for a crawler who is then going to stick her fingers in her mouth... luckily, she loves getting her hands washed each time she goes in there anyway :) 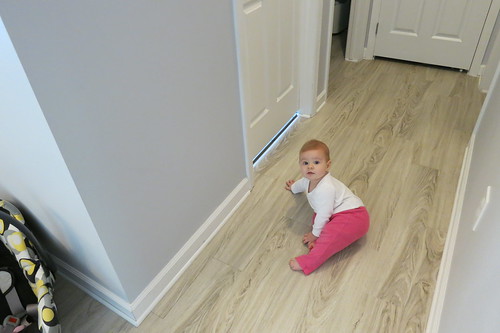 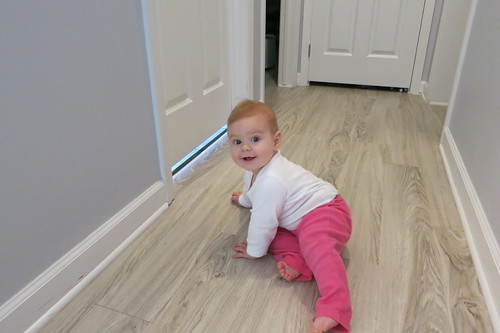 [Patiently waiting to go in her favorite room]

She also loves the Roomba, and likes to rearrange it and turn it on pretty much every night, so I've had to run over several times to turn it back off so it didn't run over her little toes. And we really need to get going on blocking off the stairs, since she's decided to head up them herself a few times now too. 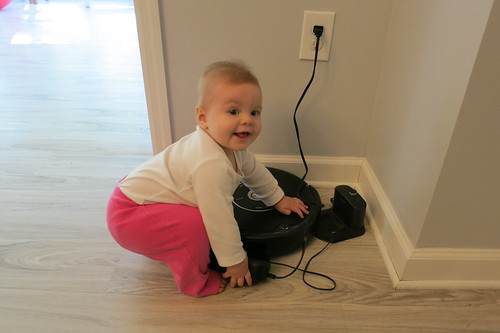 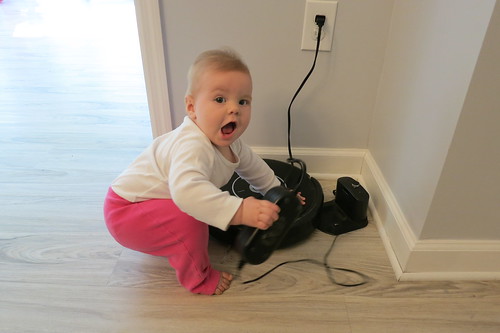 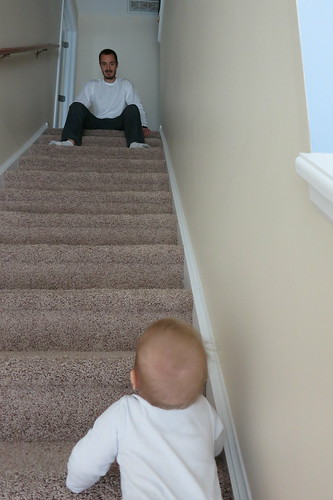 Audra is continuing to stand up all the time, and apparently even stood up on her own unsupported! I haven't seen this quite yet, though, but knowing her, I expect I will have plenty of opportunities in the next week ;) She's also showing more interest in walking now, and was able to use one of the walker toys at daycare. We haven't gotten ours out of the attic for her yet, so she instead uses one of the kitchen stools to push herself around, which doesn't exactly work too well.

I think after hitting bottom a few weeks back, we are now on the other side of a "stormy period" related to her development, since she just seems like a different baby now. She's happier (ignoring the screaming fits she still has in the car and when she's tired), able to entertain herself more, and generally just more interested in exploring her environment rather than wanting to stay so close to us all the time. She's also showing more interest in playing little games with us now, like knocking a tower of blocks over. While she's still not entirely sure about all the noise yet, she is interested in the towers I build and will get lift off (or knock over) just the very top block, and she especially likes it when I clap for her afterward :) 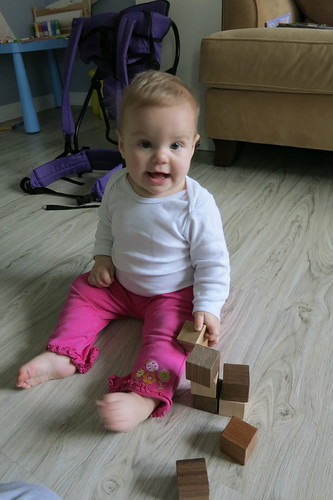 Probably her favorite game at the moment is banging on things. She takes very little provocation to get started on that - we just need to hit the counter once and she's off and running ;) I also showed her how to hit two blocks together or bang on the floor with them, which she picked up pretty quickly - she just needs to figure out how to keep her fingers out of the way so she doesn't smack them too! 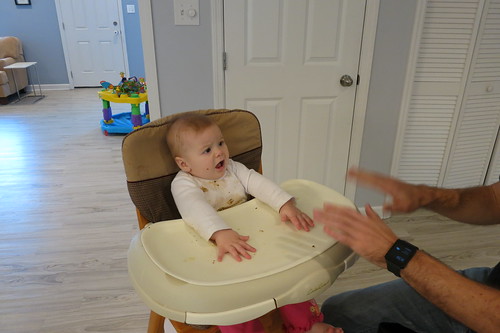 [Ryan clearly did not follow the rules of the game here]

For sleep this week, Audra took some decent naps on Saturday, actually sleeping for 45 minutes in the morning (15 minutes more than usual!) and for almost two hours in the afternoon. I'm still napping with her, and probably would be even if I didn't intend to - while I'm functioning pretty well despite the interrupted sleep at night, I still usually fall asleep as I'm nursing her down for naps anyway. Any little bit helps, I hope!

She still has an upper tooth just under the surface of her gums, so between that and what is likely the beginning of another cold, we had a couple of kind of rough nights where she wanted to nurse most of the night and would wake up mad if I tried to shift around at all. But on the other hand (and as the silver lining for the week), we also had a couple of nights in a row when she slept a few longer stretches and got herself back to sleep on her own a few times too. There was one night where I only nursed once between 8:30pm and 3am, and while I don't know when that was to be able to see if I got the elusive 4-hour stretch of sleep that's the holy grail for me right now, nursing once in 6.5 hours is pretty good for her :) The problem with her sleeping longer stretches is that she then seems to have more difficulty settling back down to sleep after she wakes. Between 3-5am is usually a more restless time for her anyway, so she had troubles settling down the rest of that night. She finally got back into some calm sleep just after 6am, and then slept on her own until Josie got to wake her up an hour later. Josie just turned off Audra's fan and softly said "wake up, Audra", and Audra immediately popped her head up, had maybe two seconds of confusion as she woke up, and then a big grin spread across her face at the sight of her big sister ;) 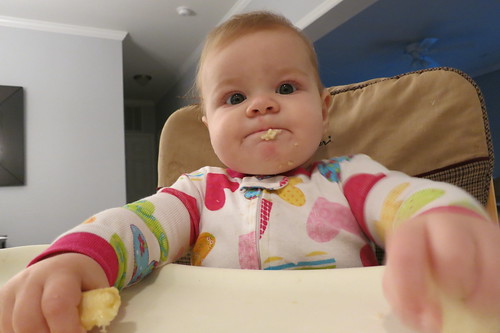 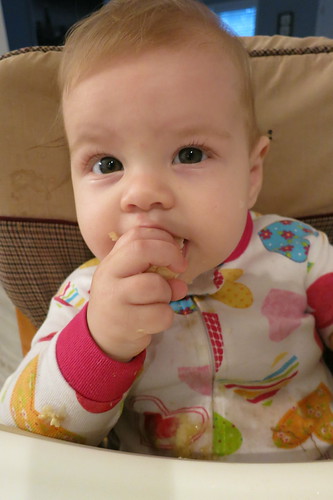 [Not the most exciting video, but I included it simply because of her happy face :)]
at 12:01 PM