This week Audra really focused on her standing. She has been lifting one or both hands up while she's standing now, and is starting to play around with her balance more (including once when she water-skied by holding onto the straps on the high chair), and is practicing sitting back down with some control. She didn't seem that interested in standing or walking (with help, of course) just a week or two ago, but now I'm thinking she will be more interested in walking soon enough. :) 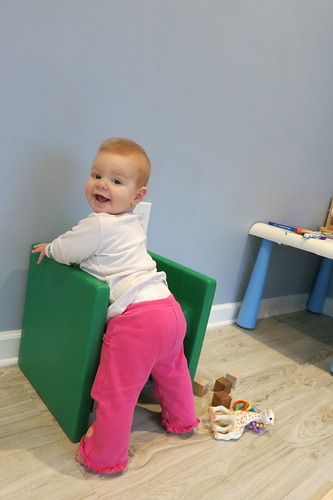 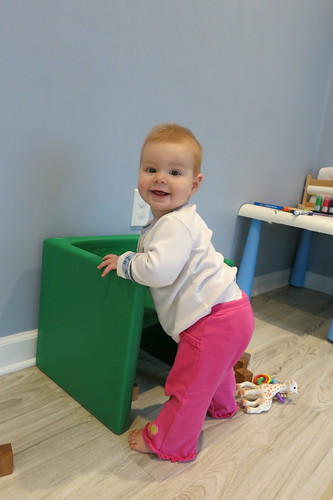 Audra has gotten so quick at crawling now - it's seriously my favorite thing to see her make a beeline towards me because she is just so cute about it. She'll be crying and panting as she crawls as fast as she can towards me, and then be all smiles and happiness once she reaches me :) So she is pretty happy now that she can get around quicker, and she is starting to explore the different rooms more. She'll chase us from room to room, and will just randomly decide she'd like to go hang out in the sun room now, and then... she does it! It's exciting stuff :) 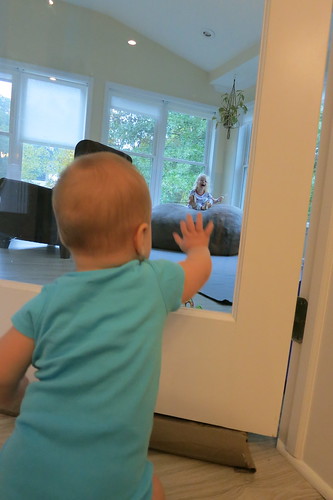 Except for one night when she woke crying about every hour (turns out eggplant is on the "do not eat" list for me!), Audra did all right with sleep this week - maybe one 4-hr stretch, and a few instances of her getting herself back to sleep on her own and/or linking together a few longer-than-one-hour stretches. A silver lining for the week is that I have apparently adjusted what I consider a "good night", since she was mostly still waking every 1-2 hours all night, and I am ok with this :) Since I'm away from her so long most days and don't get that much time with her in the evenings while I'm trying to get so many other things done, sharing sleep with her is helping me feel more close and bonded with her. I'm also getting to know all of her sleep habits to a degree that I wouldn't otherwise know, like the cute sounds she makes when she stretches or the violence with which she rolls over when she's asleep :)

Audra has continued to do pretty well going to bed between 7:30-8pm, and has been sleeping on her own each morning now, waking around 6:30am rather than the 5:45am she had been doing. So she's not losing out on too much sleep by going to bed an hour or so later, especially if she's able to get a nap in while Ryan walks her as I eat dinner. And then when she wakes up in the mornings, I deposit her in my closet where she grins and blows "t"s at me while she plays with her toys, before she inevitably crawls into the bathroom to play around my feet, get into the trash can, pull on the shower curtain, or - like yesterday morning - pull herself up to standing so she can smack the toilet lid. 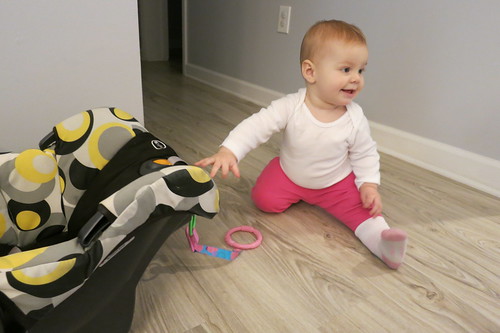 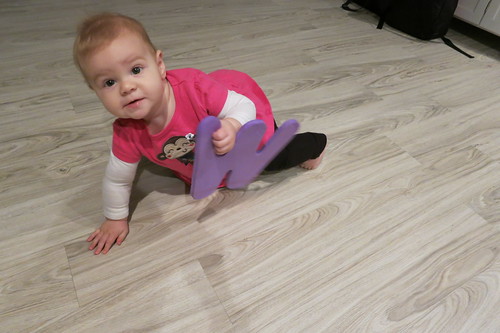 [Her chew toy of choice lately: pieces of her floor mat]
[Beating up on Ryan]
at 4:14 PM