Except for an epic, overtiredness-fueled meltdown on Saturday which led to Audra (and me) skipping Ryan's mom's birthday dinner, last week was a pretty good week :) And for some reason, I hardly took any pictures (and no videos!) of Audra last week, so I will attempt to make up for that with words instead ;)

Audra appears to have gotten over her latest cold now (as have I... and Ryan... and Josie. Could it be that we're all healthy for the moment?!), but she still looks a little rough. No matter how diligently I cut and file her nails down, poor thing usually has scabs in her ears and on her nose from her nails anyway (and now I have a scratch on my nose from her attempt to forcibly remove it from my face too). She also banged her eye against a table this weekend, so she's sporting a bit of a black eye at the moment :( But she also cut her other top tooth this weekend, which seemed to happen rather quickly, with just some more hand-gnawing than usual for a couple of days and possibly being a factor for her Saturday meltdown.

Audra still isn't doing too well napping for us on the weekends unless Ryan walks with her, but she did pretty well with her overnight sleep this week. She had a few 3-hour stretches and some nights only (only!) woke up maybe 4-5 times. Now that I'm able to fall back to sleep more quickly again - and she didn't wake whenever I shifted - these constituted pretty good nights. I had been having trouble getting back to sleep in the early hours of the morning for the past several weeks, and while I guess it was nice to have the extra "thinking" time (I came up with so many good ideas then!), I'm still fine with getting that time back to sleep instead of think ;) Audra also seemed to be resettling herself more overnight without my assistance, including once when I was pretending to still be asleep and she just rolled over so her head was on my shoulder and slept for the next hour cuddled up on me.

Audra seems like getting kisses and me poking her nose more now, since she'll hold quite still for it rather than ducking from it like she used to (whether or not that was intentional is a different story...). Her left middle finger is also apparently the explorer of the bunch, since that's what she'll use to touch things or poke at them (including Josie's eyeball yesterday, which she wasn't too pleased about). Audra has also hilariously redoubled her efforts in the grunting game - now she balls up her fists, scrunches her eyes shut, and does funny things with her eyebrows as she aggressively grunts at us, sometimes throwing in an "AH-DA!" too :) She will say "dada" if prompted, but just looked at me rather bemusedly when I tried to get her to say "mama". Oh well. 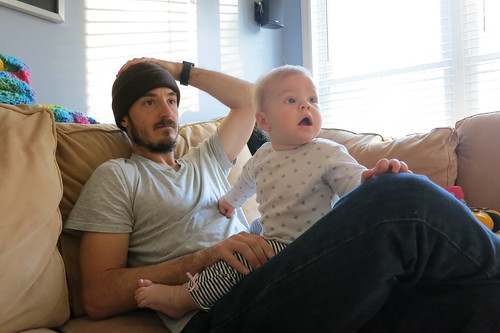 The first time I see Audra when she gets home from daycare is now one of my favorite parts of the day - as soon as she notices me, she'll head straight for me (making cute little sounds the whole way), then usually pauses right before she gets to me to grab my hands or sit up to show how excited she is by bouncing and flailing her arms around. Then I quickly end up covered in children as I nurse her, since Josie will usually come join us to pat Audra on the head and sneak in some cuddles of her own with me too, before we started rushing around again to get dinner ready and then get us all off to bed. 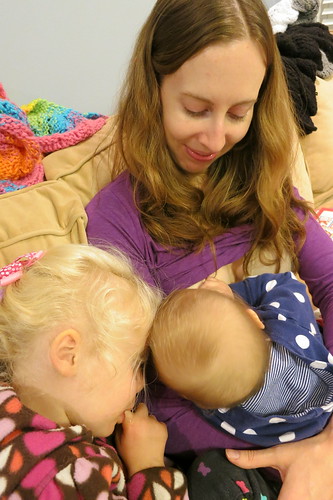 So, I'm happy that I've finally started to also use nursing for communication and affection rather than just sustenance, sleepytime, and comfort if Audra gets hurt. As some of my middle-of-the-night thinking sessions, I've been exploring what my "baby nirvana" would be for Audra - as in, the place I want to be in my parenting of her. And I've realized that my ideal is even further on the "crunchy" side of the continuum than I realized - I think my nirvana would be to just accept and melt into her very neediness of me, wearing her more, nursing her more, keeping her closer. I've done some of that already out of what seemed to be necessity, but I think we would both be happier if I went even further with that. Along with all the other things I feel like I need to do (like clean the house), I just struggle with the tension between what she should be doing (based on what I admittedly believe are some arbitrary societal pressures), and what she is doing, which is just being her own unique little baby self. It's also hard since I obviously have another child and a husband who I need to be present for too, but Ryan has been particularly wonderful with Josie lately while I focus on the neediest of our family members right now.

I anticipated growing and changing as a parent to meet Audra's needs, but how that's manifesting is still catching me off guard with just how difficult it can be. We've taken the approach that the baby's needs take priority for about the first year, then we will gently and gradually shift to being more balanced with more give-and-take in the relationship after that, all based on our main parenting tenet of "doing right by the kids". So a large part of my struggle stems from giving up so much control, especially for this first year, although I'm realizing that I'm so much happier when I just accept that there are many things in my life right now that I can't control, and they are probably not going to turn out the way I wanted them to. The sleeping situation in particular still overwhelms me sometimes, since I don't believe that Audra will be sleeping on her own anytime soon, but I'm also finding the beauty and peace in just giving in and enjoying sleeping with my littlest snug up against me. And if my experience with Josie is anything to base it on, I will not regret one tiny little bit doing all of this for Audra - sleeping with her, trying our best to hold her when she wants to be held and comforting her when she cries. Everyone has to make the decisions that they believe are best for their family, and in concept, I absolutely believe in the decisions we've made - just in actuality, I still have to push past my lingering wishes that things were somehow different, in some unspecified way, and just work with things as they are. 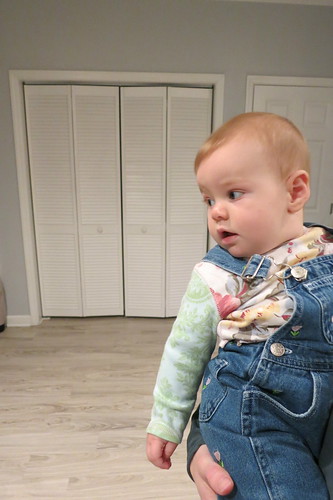 [This for her Aunt Alyson, who likes babies in overalls ;)] 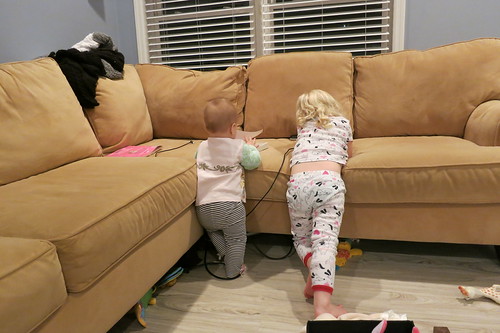