The theme for October seemed to be about switching identities for Josie. We had several dinners where she would announce our alternate identities (I'm Peppa, you're George!), she had an ongoing game at school where she was a sick kitty cat (which somehow involved mulch in her shirt serving as medicine and band-aids), and she dressed as a tiger for Halloween :)

She was quite excited about being a tiger, and practiced all week for how she was going to say "Happy Halloween! ROAR!" :) I went to see her parade at school, and while Josie was a little subdued at first, once she caught sight of me she squealed and stomped her feet, she was so excited :) 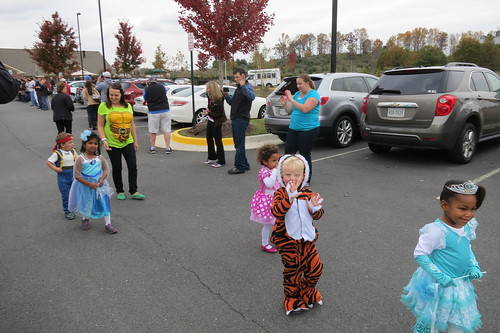 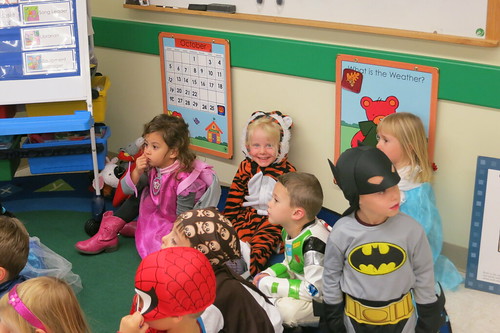 I planned to stay home with Audra while Ryan took Josie trick-or-treating with her cousins, but first I diligently followed the instructions on my face paint set, and did a pretty passable tiger paint job for Josie, if I do say so myself ;) Josie seemed to be a fan too: when I was painting her upper lip, I had asked her to hold very still and not talk.... and yet she kept talking. After I asked her again to not talk, she reverently whispered, "But it's so beautiful!" She had a great time trick-or-treating this year, and was still raring to go even after her bucket was completely full. 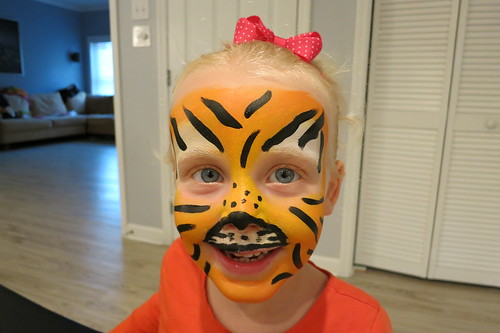 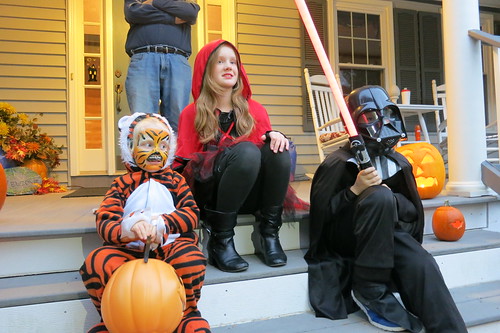 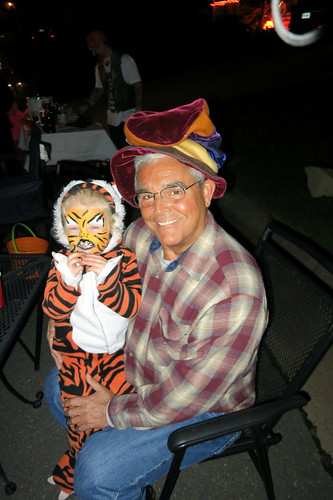 Josie's imagination has really been a thing to behold this month. She seems to love the mulch at school, and several days in a row, had her shirt filled with it when I went to pick her up, pronounced it her "mulch baby" and did not want to go home without it. She also told me about her invisible friends standing on her stickers (who then broke the counter but at least fixed it afterward), and said that she yelled "No!" at Sofia the dead swan when she was taking a nap.

Her language skills are also improving at a rather rapid pace. Lately she has been really interested in having me spell things - she'll call out words for me to spell, then will mouth along with me as I say each letter. She also is starting to make connections that the words she sees actually mean something attainable to her, since she sometimes can recognize them now. So she's been more involved on the computer, as she tries to find her name or Audra's name on the screen, and insists on typing her name (and the rest of the family's, if she gets the chance), which has led to her first IM (sending her name to Ryan), and first Google+ post (where she shared a random article with Ryan, then captioned it by typing all of our names, twice). She also is getting a bit more complex with her sentences, and her grasp of time. For example, she told me not to burn my hand again (remembering that I had burned my hand on the oven a couple of weeks prior), and when Ryan asked her if she would ride on a skateboard ramp, she responded, "Yes, we will hold hands and ride skateboards and we will never fall."

She apparently knows more math than we realized, too, as she randomly announced "two and two is four" and correctly answered some other simple addition problems we put to her. And we also realized she does yoga at school, as she happily ran through several poses one night. So we got out my yoga mat, put on a kids' yoga video, and she had a blast :) 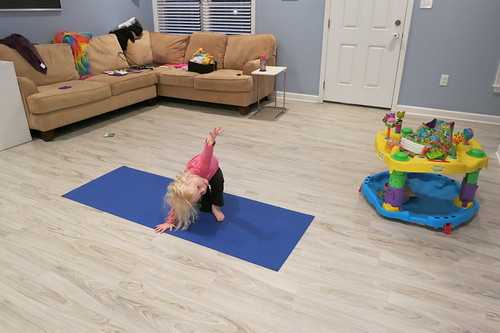 Her eating is still a little inconsistent - she did start eating better again, although there were a couple of nights where she started with the "I don't liiiiiike it" whine before she even saw dinner, which I still find massively annoying (although, sadly, one of those times was probably legitimate, since she got sick after dinner :( ). But beyond that, she's being much more cooperative with food again, trying everything on her plate without a fight, and even asking for seconds on occasion (rather than her usual request for fruit or nuts after she finishes dinner). I also split an artichoke with her, which she was quite excited about, although we had a bit of a dispute over whether it was an artichoke or an avocado ;)
Since I'm currently avoiding dairy, it seemed like a good excuse to have a "practice pie" to test a dairy-free recipe before Thanksgiving, so my mom and Josie made a pumpkin pie together. It turned out well, although we were quickly reminded of one of the reasons we don't normally give Josie sugar, as she seemed to be having a bit of a sugar rush afterward. 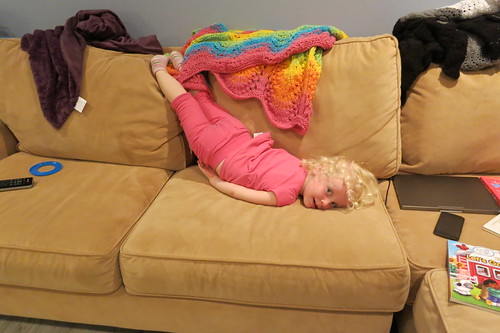 My mom also took Josie for the day one Saturday, marking the longest Josie has been away from us on a weekend so far. My mom picked her up mid-morning, they got lunch from Chick-Fil-A (Josie's favorite), and then they went to a pumpkin patch after nap with my aunt (Auntie Pat, as Josie calls her), and one of my mom's friends and her granddaughter. Josie had a great time playing on the seesaw there, which was made out of an old tractor seat, complete with steering wheel, and (repeatedly) going up and down all of the slides.

After another stressful attempt to get out of the house for a Mommy/Josie outing, I ended up putting them on hold for now. It can be difficult enough to get Josie out of the house sometimes, and when there are certain prerequisites to me being able to leave (pumping, trying to get Audra to nap to minimize the chances that she'll scream the whole time I'm gone because she's overtired), I get more stressed and it just doesn't lead to a good situation with Josie. So now we're just trying to find unscheduled opportunities whenever we can for me to have more one-on-one time with Josie, which is working out fairly well. It may not be a whole afternoon with her, but a short outing with her every other week or so is workable for us for now. So one of our outings was an abbreviated trip to the library (the day after the attempt that broke "Mommy/Josie day"), and then we went out to pick up burgers again afterward, which Josie was sorely disappointed by because I didn't get her a kids' meal (which comes with a soda). 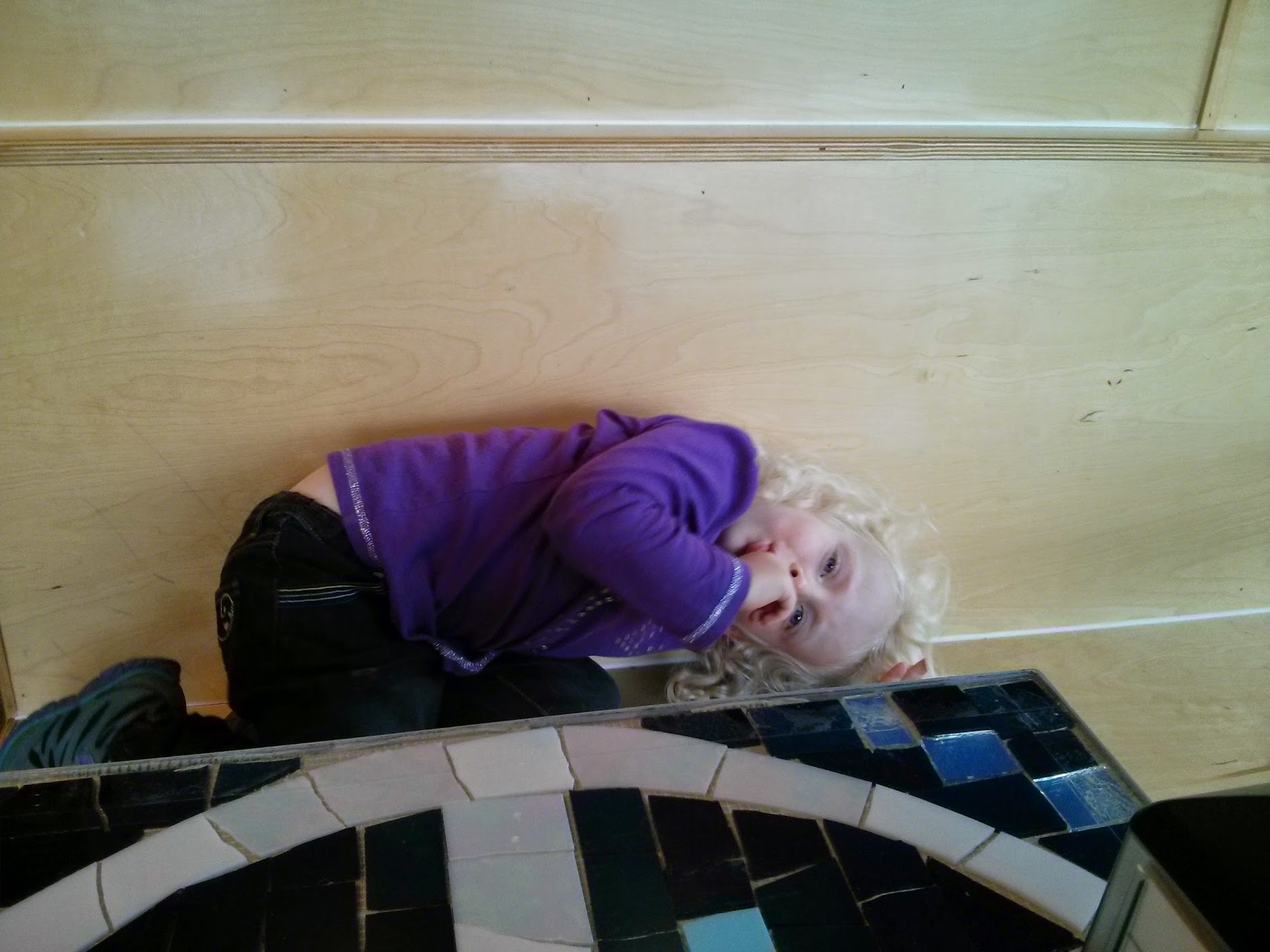 [Sometimes it's hard to be a Josie]
Josie and Audra are still doing really well together. Josie was super into playing peekaboo with Audra one day, throwing a small blanket over Audra's head and then pulling it off to peals of laughter... mainly her own. Josie was quite a bit more excited about this game than Audra was, but I suspect Audra tolerated it because it was Josie ;) Josie has had the opportunity to wake Audra up a few times now, which I think she loves being able to do - Josie certainly doesn't like it when we wake her up, but she seems to delight in waking up Audra and seeing her grin when she catches sight of Josie :) Perhaps not coincidentally now that Audra likes playing with blocks, Josie has shown a renewed interest in them too, and will build towers using every one of the blocks she can find. And although she fusses about Audra knocking them over while she's building them, as soon as she's done, she'll encourage Audra to come and knock them all down :) Josie also does a great job trying to keep Audra content in the car, and will tell her "it's ok, Audra", or sing to her or even make up songs for her so she doesn't cry. 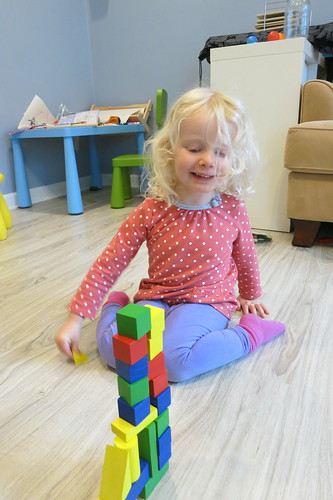 Speaking of songs, Josie is pretty obsessed with one of my favorite bands (Tegan & Sara). She asks very nicely for "more Tegan & Sara, please" whenever a non-T&S band comes on in the car, sometimes will request specific songs (and is able to recognize some of them now just by the opening notes), and likes to analyze some of their videos too ;) And although I do love them, I have to admit - after weeks of only listening to T&S with Josie in the car, I definitely skip over their songs when I'm on my own now ;) Josie and I have sort of a fundamental difference of opinion over the music selection in my car, though - Tegan & Sara are one of my "outliers" compared to the pop punk I normally listen to, and one of only 3-4 groups I listen to that are fronted by girls - not that I have anything against girl singers, I think it's just not that common with the genre of music I like. Meanwhile, Josie *only* likes bands with female vocalists, dubbing just about every other band I like as "bad boys" - although she does like songs where Tegan or Sara collaborate with other "boy" bands, and sometimes asks for songs with "Tegan and that boy" or "Sara and that boy". Silly girl. She also sings along to several of the songs now, and while she normally demands that I not sing too, she did allow me to join in once, which prompted an awesome singalong (at the top of our lungs) that still brings a smile to my face to remember :) 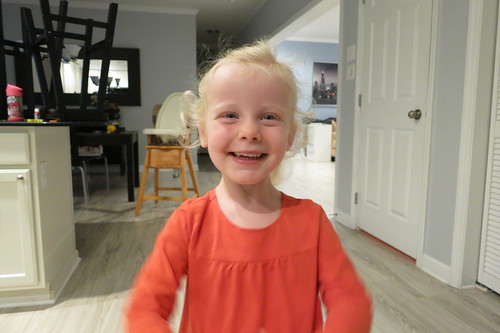 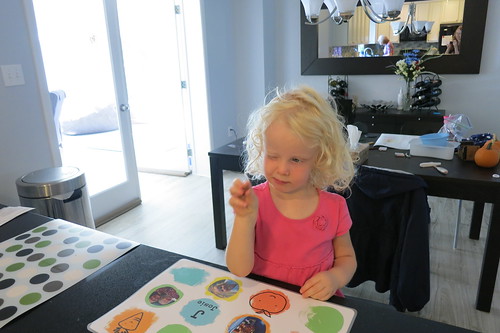 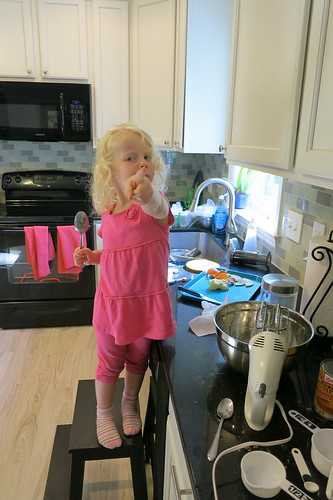 [I clearly had done something wrong here] 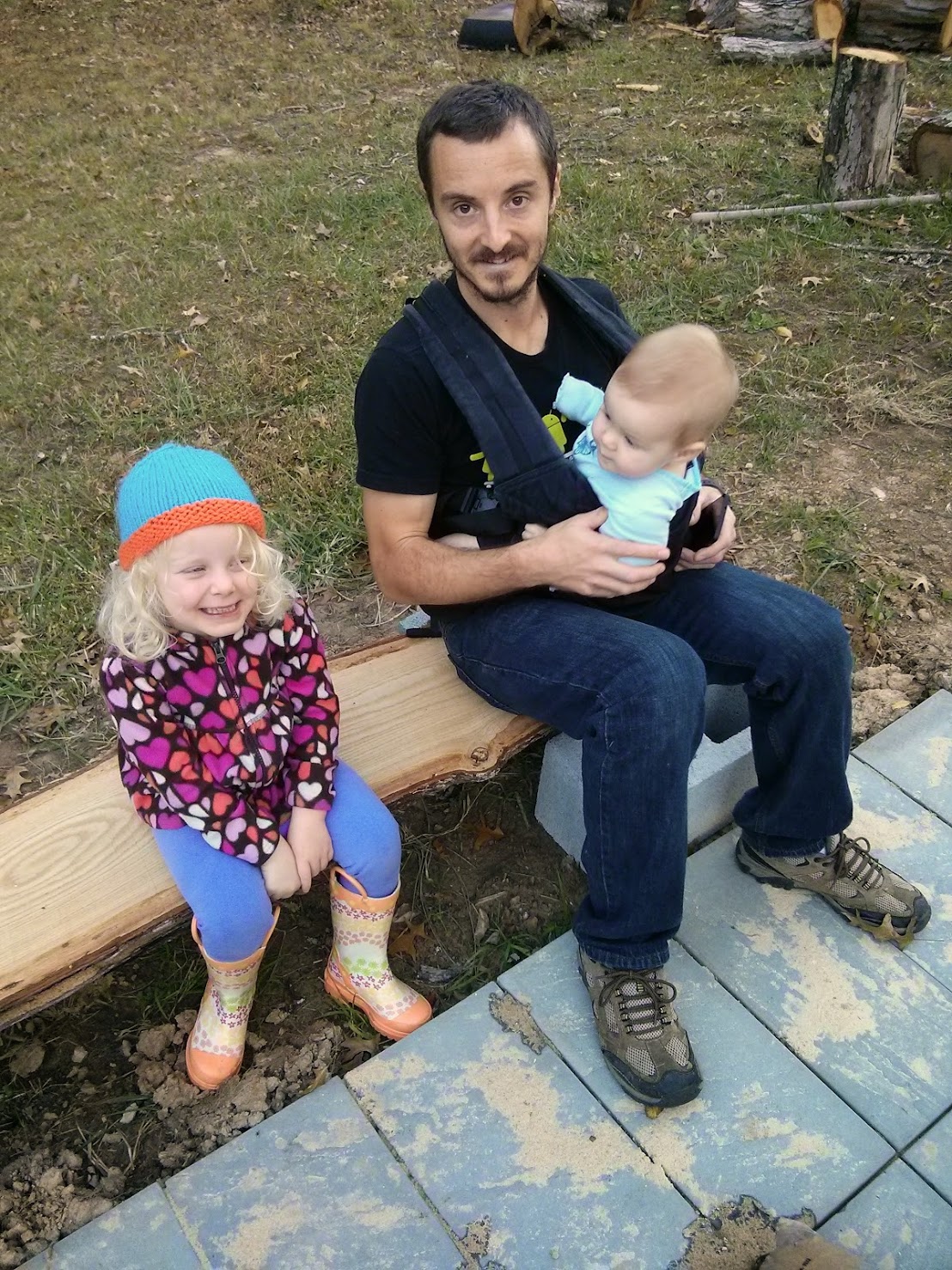 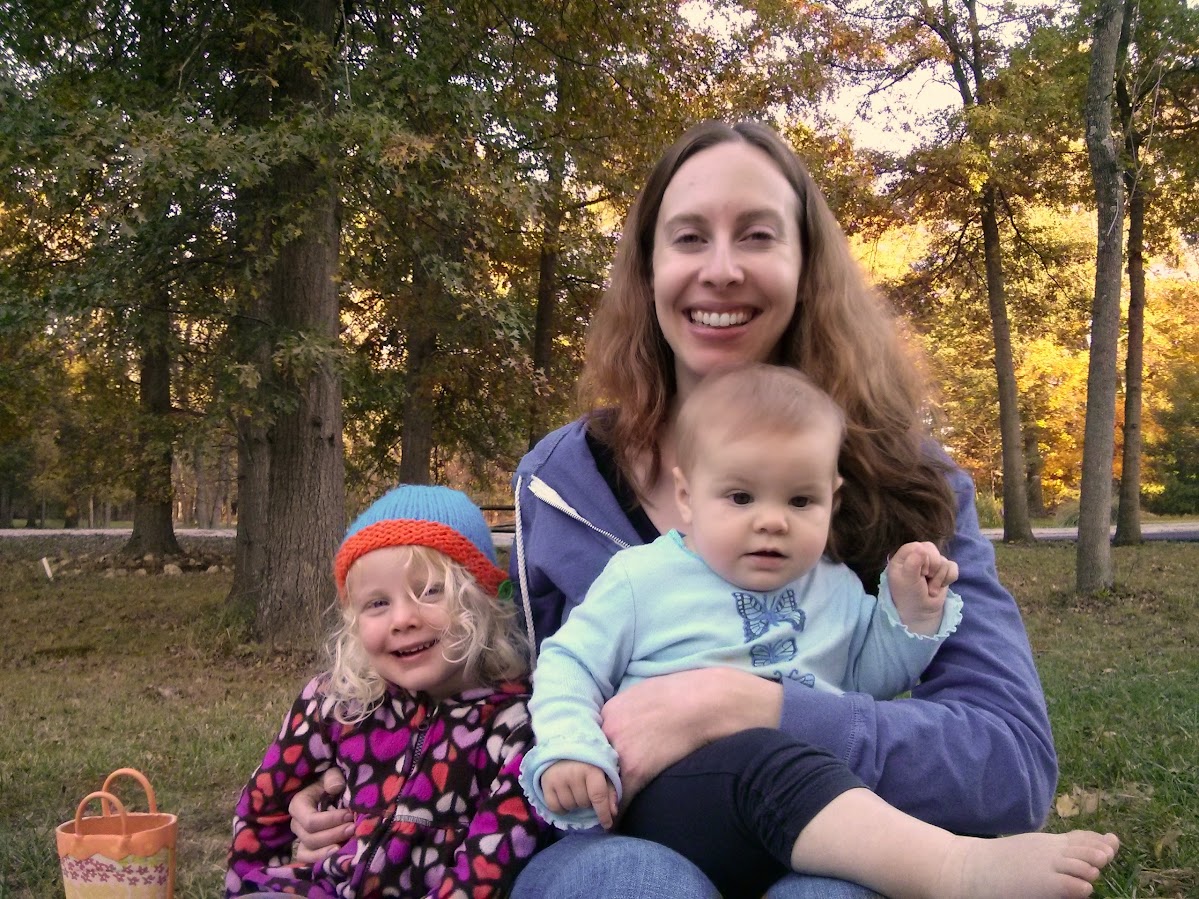