For Audra's first Halloween, Josie and Ryan went out trick-or-treating, while I dressed Audra up like a pumpkin and chased her around trying to take non-blurry camera phone pictures of her :) Since Ryan didn't have a chance to take her out for a nap walk after daycare, she lasted for about five minutes before deciding she was quite done being a pumpkin, so we ended up going to bed early at 6:45pm. We know how to live it up at our house ;) 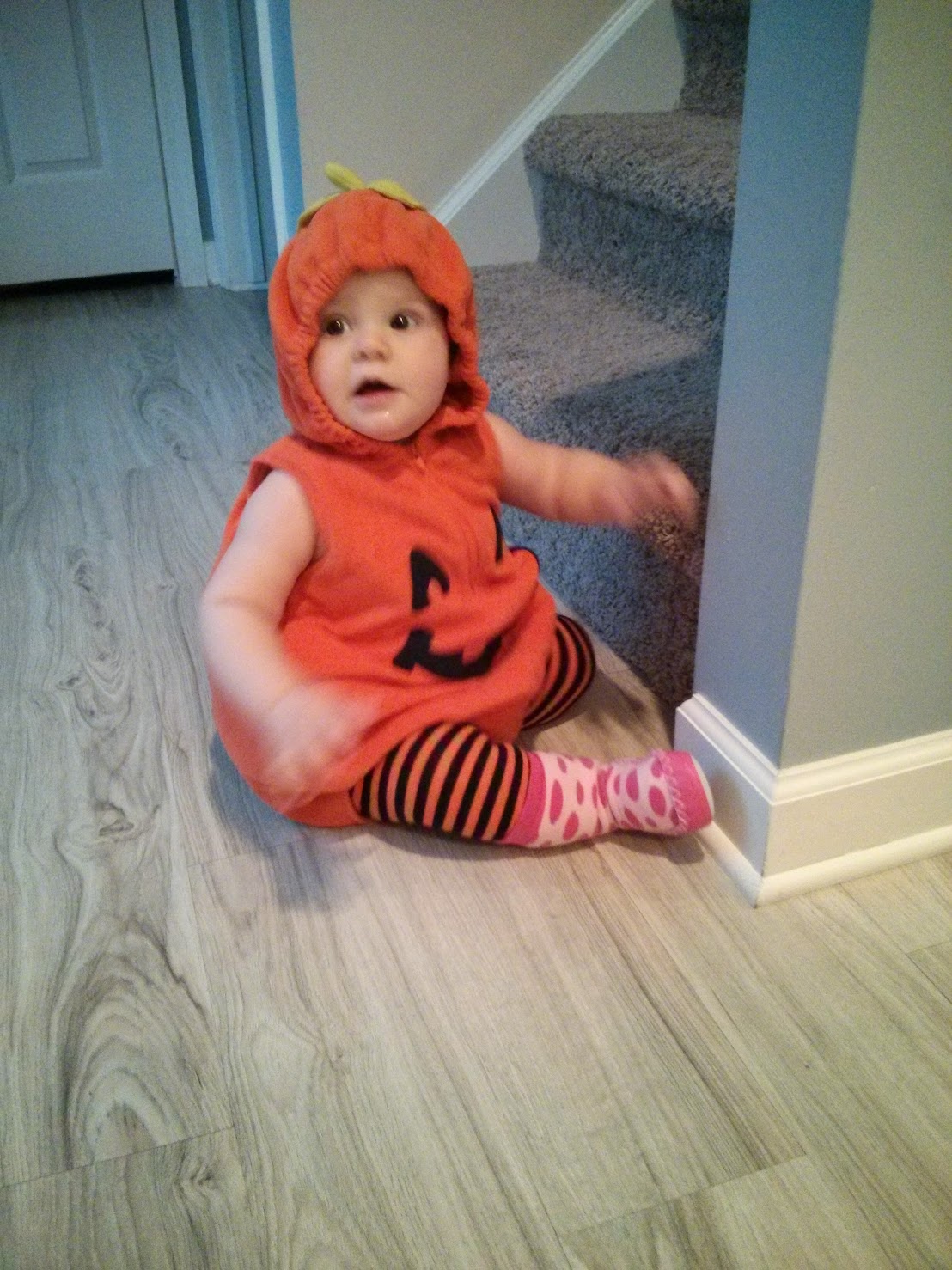 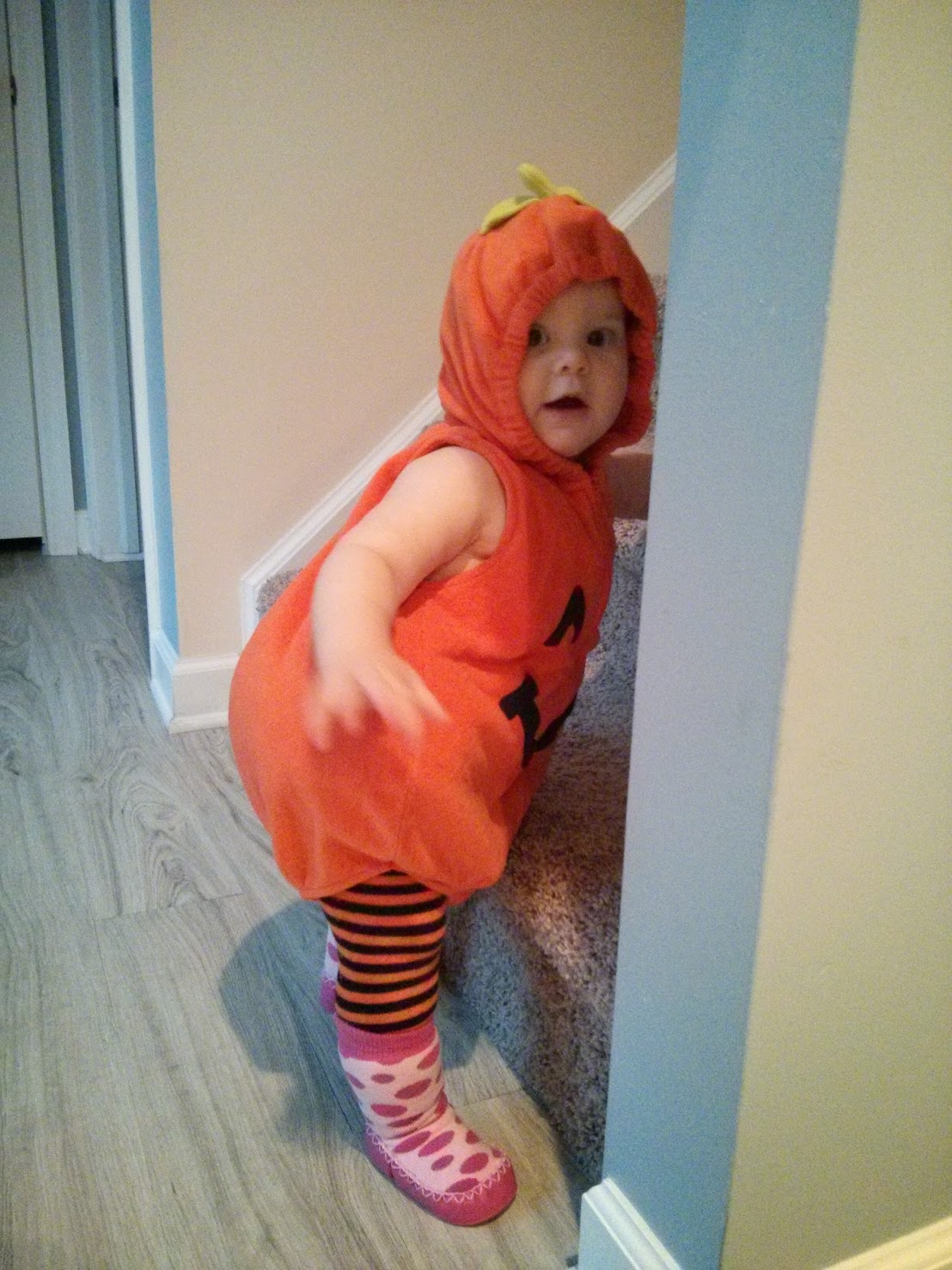 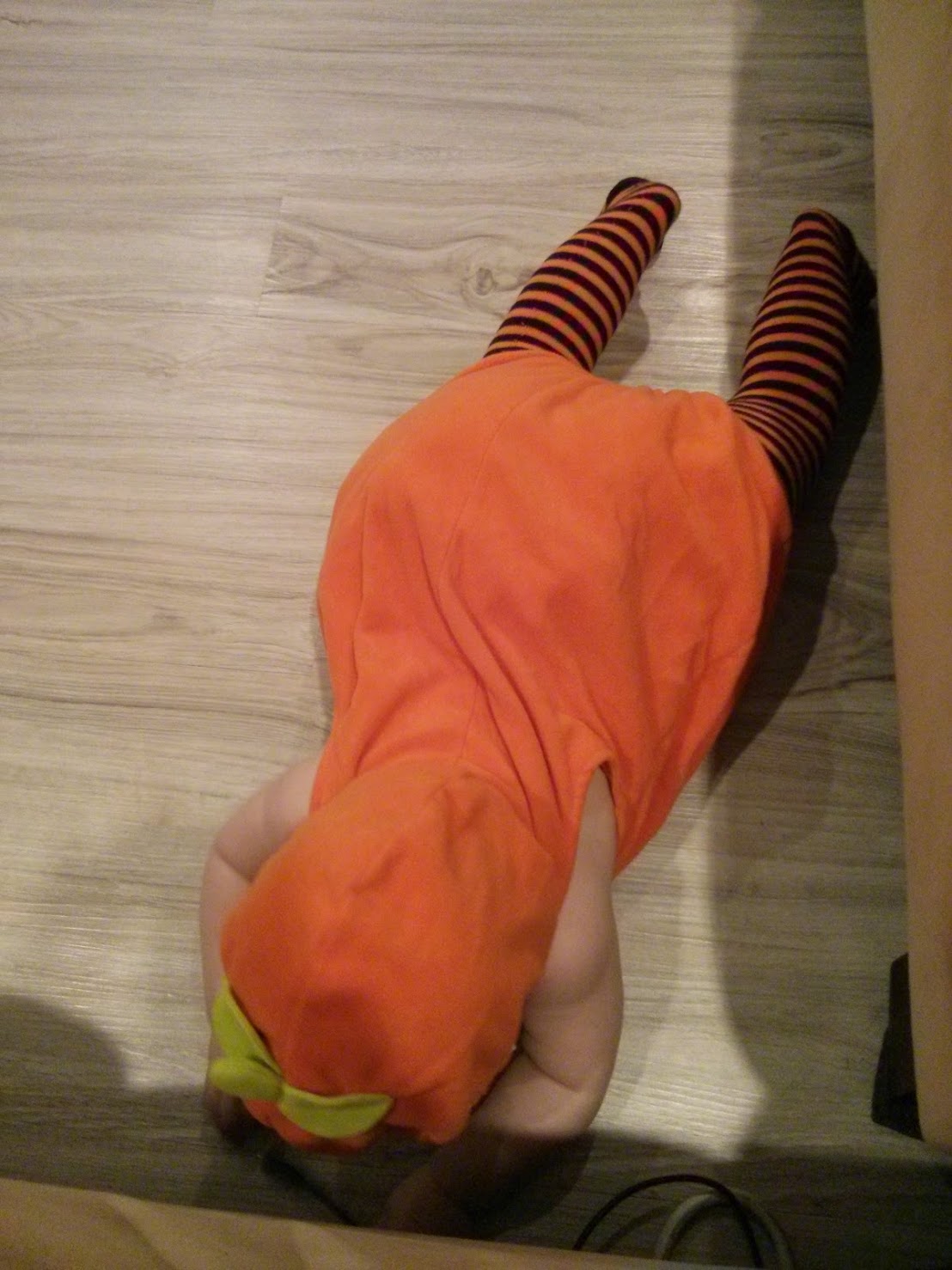 [I just find this picture very funny. Trust that she was up to no good.]

Audra really got into blowing raspberries this week, which is just adorable. Along with her various other babbling noises, we have now had many conversations comprised mainly of blowing raspberries at each other. Much less cute is that she also started grinding her teeth this week.
Audra is learning how to open the cabinets, and now has her own designated pot and spoon to bang around. And as she gets more adventurous, she's getting herself into sticky situations a bit more - she has climbed right into one of the corner cabinets and attempted to crawl under/through a stool, but then usually gets stuck and has to have us save her. 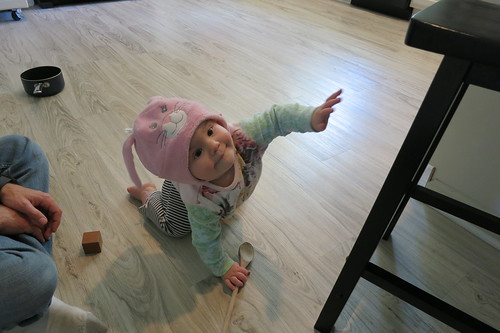 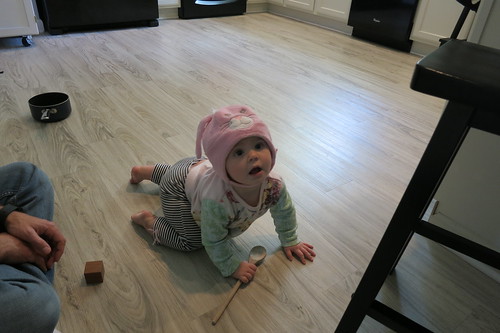 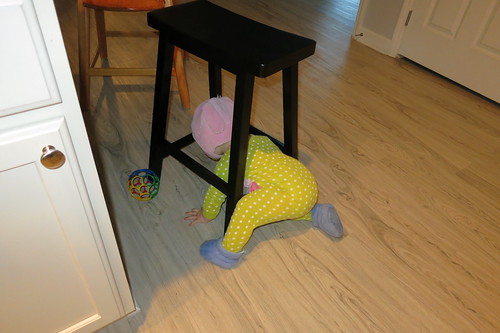 She still has a little bit of a cold, but it's more tolerable now that she's just coughing some during the day and a little congested at night, rather than coughing so much she can't sleep. And we finally got her diaper rash to start clearing up - the answer was apparently Lotrimin a couple of times a day and Triple Paste with every diaper change. I had never seen a rash that bad before, so I was starting to get a little worried about it, but hopefully it will be totally gone in a few more days.

Audra tried out pears for the first time last week, which seems to be a hit. She certainly is interested in eating solids and is ingesting some, but it seems her gag reflex is still pretty strong since she ends up spitting quite a bit out. In part because of this, we're still holding off on giving the ok to daycare to start giving her solids until she gets a little more skilled at feeding herself, chewing, and actually swallowing the food. We're going along with the "food before one is just for fun" mantra, and prefer to have her do it at her own pace, so she can control what she's feeding herself more and explore the different textures, consistencies, and tastes. 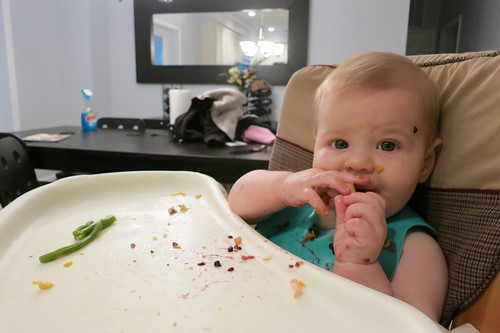 Audra did pretty well with the time change, just having some problems going to sleep the first night (which doesn't make any sense, but she ended up going down almost 2 hours later than normal) and then waking up an hour earlier the next day, but now she's back to going to bed usually between 7:30-8:30pm (depending on if she got a car or walking nap in after daycare) and waking up between 6:30-7am. Her biggest problem that could possibly be blamed on the time change is really the drive home from daycare, since she has been screaming bloody murder for that again. Ryan is thrilled.

After a couple of rough nights of Audra waking frequently or wanting to nurse most of the night, we have had a marvelous last few nights of sleep - she still is waking about every hour for the first and last few hours of the night, but in the middle, she has been doing 2- and 3-hour stretches now. She generally falls back asleep fairly easily overnight, even when I get her up for a diaper change at 4am and she's wide awake afterwards (and she also fell back asleep once on the change table, and slept through me changing her diaper AND sleeper). She also was able to resettle herself without nursing a few times when I disturbed her by shifting around trying to get comfortable, and so I actually feel decently well-rested at the moment now too :) 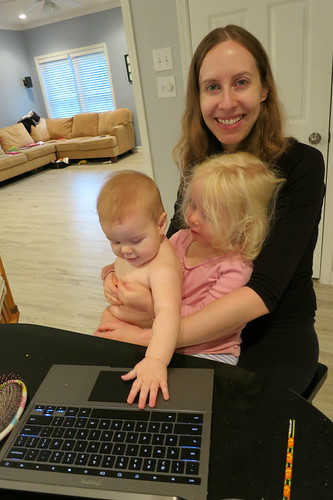 [Walking :)]
[She really likes the clapping part of playing with blocks, and is starting to try to clap herself too]
at 4:39 PM