Last week Audra decided that screaming only when she's upset was not enough, and now she screams when she's happy too. For some reason I find this hilarious (Ryan less so), particularly when Ryan, Josie, and I were sitting around the table, all plugging our ears as Audra expressed how pleased she was with her food by screaming at it :)

Besides that, Audra just did a lot of bouncing with excitement last week. She would touch her ball, bounce at it as it rolled away, crawl over to it, touch it again, bounce, rinse, repeat. Josie also has been regaling us with various songs lately, and Audra apparently loved that too, since she would just bounce with glee whenever Josie stomped by. 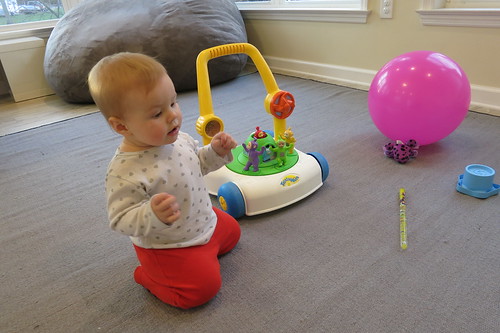 We finally got Audra's walker out of the attic, and she's been especially intrigued with it, using it both backwards to crawl with and forward as it was intended (although sometimes with a rather perplexed look on her face). She also spends a decent amount of time just standing next to it, like, "hey, I don't need your stinkin' walker! ... oh wait, yes I do." ;) And actually, she will now use just about anything as a walker, and will push a stool, chair, or table around in front of her so she can walk behind it. 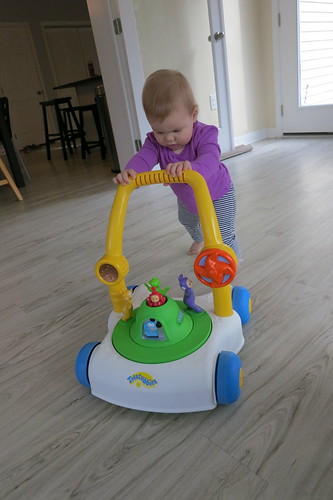 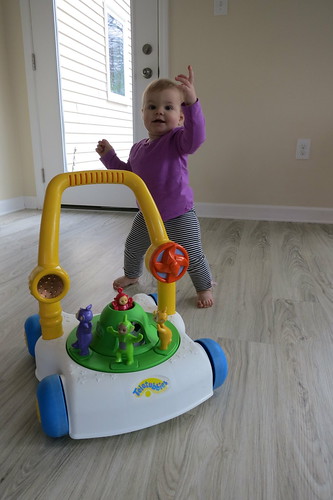 Sleep is going just fine. There were a couple of instances where Audra woke up last week but got herself back to sleep without nursing, albeit in awkward positions, like arched backward under my arm. Also, she has started waking less frequently at night again, and even did a couple of 5-hour stretches (!!). She still is pretty restless the last couple hours of the night, so she wakes/nurses frequently then, but beyond that, she had a couple of nights where she only woke once or twice before 4am.

I tested adding broccoli back into my diet last week, and not only did Audra do just fine with me eating it, but she seemed to do really well eating it herself too. Given her enthusiastic approach to food so far, I kind of thought she might like some spicier food, but it turns out she is not at all a fan. It was actually on accident, too, since Ryan just gave her some avocado that had been sitting on top of some slightly spicy fish, but suddenly she was crying and crying, rubbing her eyes, and very upset. So I fished the avocado out of her mouth, gave her some water, and she did ok after that, but yeah. No spicy food for Audra.

Audra's other eye tooth is definitely coming through now, although I don't see any more teeth lurking under her gums yet, so she may have a little break before the next ones. I can't really get any pictures of her top teeth yet (oh, but they look like they'll be giant), but here's one of her bottom teeth, at least :) 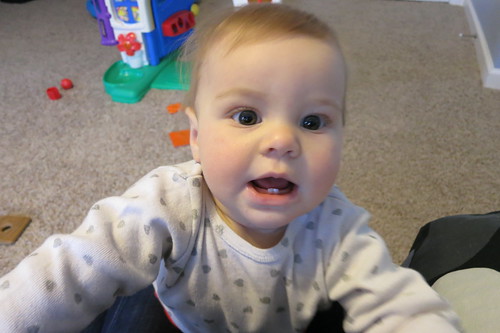 Audra got the second dose of her flu shot on Monday, and while she did well for the shot itself, she did have some trouble the rest of the day. She apparently struggled with napping at daycare, waking up screaming each time, and then was really upset in the evening too. She had some problems falling asleep that night, but then slept just fine overnight and seemed to be back to normal the next day. 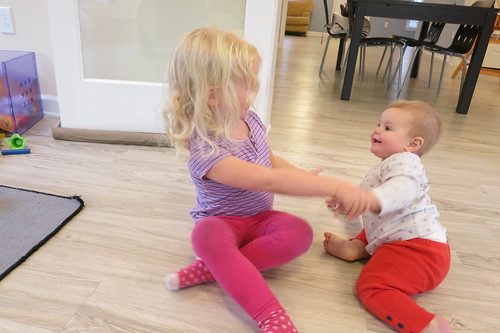 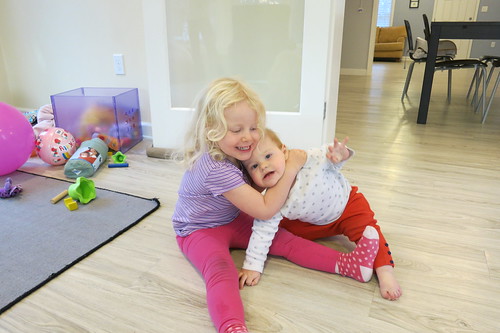 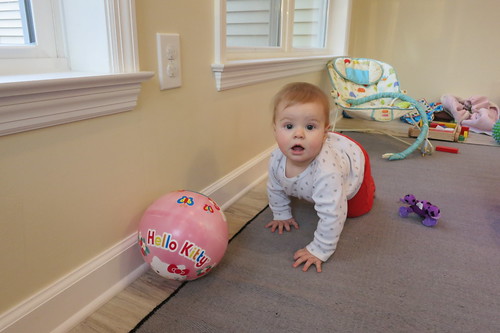 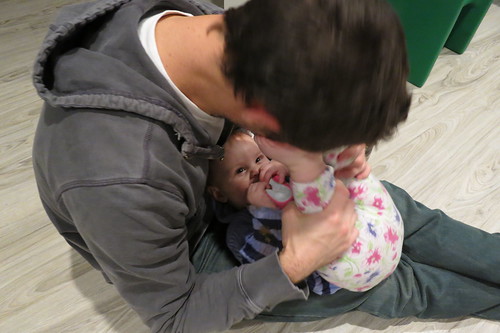 [I just love the way she crawls]