As I'm almost better from my last illness, it seems only fitting that Audra came down with something again :( She has had just a little bit of congestion, but the bigger problem is all the coughing, as she has been up for hours overnight because of it. She also has been waking up more lately anyway, and I don't think her cold was helping matters, So it was at least every half hour for several nights, with only a few 2-hour stretches in there. Perhaps needless to say, this has not been a stellar week for sleep.

Besides that, though, the only other issue really was a couple of evenings of fussiness/screaminess, when she wouldn't tolerate being in the carrier and even still yelled at me despite the fact I was not only sitting on the floor with her (which is usually enough for her) but even was trying to hold her (which is actually what she usually wants). So she kept flinging herself off me to lay on the floor to be able to properly tantrum... except when she laid down, she kept bumping her head even as I was trying to catch her each time, so that would get her more upset - really, it was just a big mess. We suspected she might be coming down with another ear infection, and while we're not sure if it was just coincidental or not, we have been putting garlic mullein in her ears a couple of times a day the last few days and she has been much happier again.

Ryan and Josie continue to go to the pool most evenings, so Audra and I continue to entertain ourselves at home :) Little things prove to be quite fascinating to her, and we spent quite a while one night playing with Josie's oven mitt... Audra would hand it to me to put on and then would light up when I'd wave to her, then would shove her hand in when I held it up for her to then stare in wonder at the oven mitt on her hand... before, of course, she would take it back off and hand it back to me to start again :) 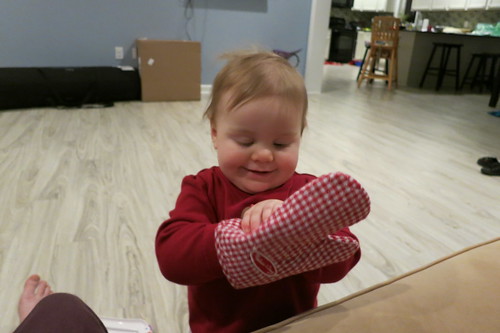 She has been a little ridiculous with the cleaning up lately. After she eats and I set her down on the floor, she immediately beelines for the brush and dustpan or a wash cloth now, and will diligently "clean" as she sweeps things around and scrubs the floors. She even has brought me little bits of food that she's picked up off the floor, which is much better than her usual approach of either eating it or throwing it out. We've been having to keep a closer eye on her lately as she tries to throw out toys, wash cloths, her toothbrush, etc. 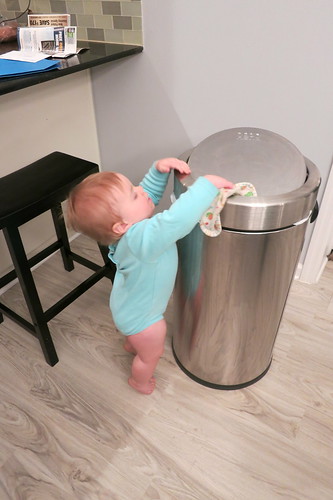 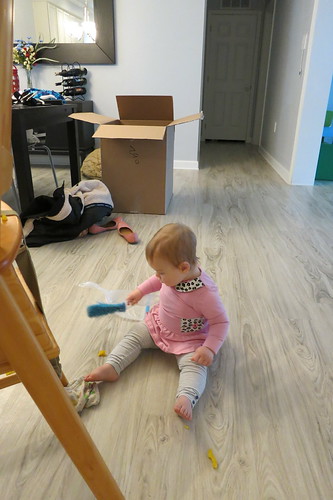 We all went to the pool over the weekend, and Audra had a lot of fun again, although she did decide she liked the chlorinated water there so she kept trying to drink it, so attempting to thwart her kept me busy. I just think she's so cute when she shows interest in toys and plays with stuff now, like when she was vrooming around her toy car one night, and then sitting in one of our kid chairs, kicking her little legs as she played with her baby doll :) She also figured out that chairs make good stepstools, and we caught her pushing a chair over to the dining room table, climbing up on it, and grabbing for all the stuff we thought had been safely stored out of her reach.

Even though I'm pretty sure I learned this lesson a week or two ago, as it turns out, I really can't eat cheesy pasta yet as I had baked ziti one day for lunch, and she did not do too well that night. Meanwhile, we tested peanut butter and mussels for her last weekend, and she had no problems with either, so that's good. And although she had one night where she ate everything on her tray and then cleaned out her bib too before eating two clementines (and yelling for a third), most nights she doesn't bother too much with the vegetables and just chucks them off her tray pretty quickly. She likes some (red peppers, broccoli), but really seems to prefer fruit and meat. So here she is contemplating her fancypants sausage that we got from a local farmer... I had been a little unsure about giving it to her since I was afraid she'd just throw it on the ground and "waste" it, but I should have known better with my little carnivorous baby, who ate it right up ;) 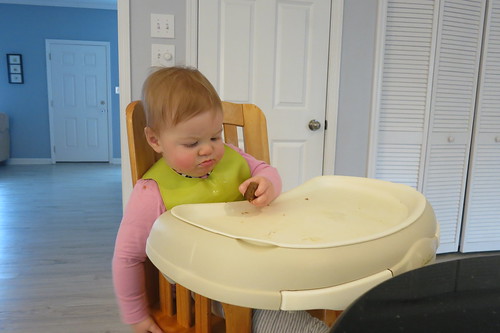 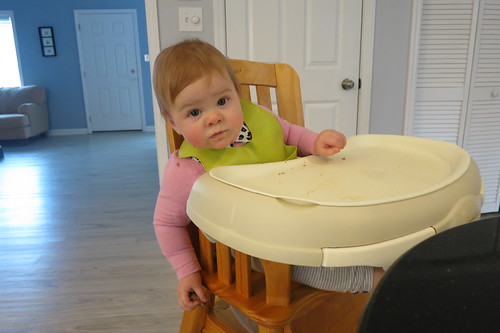 This week's "Miscellaneous cuteness" segment is dedicated to the jumpsuit I came across in one of her drawers. We were like, "What IS this?!"... and it was so inexplicably absurd that it clearly meant (to us) that we should dress her in it for Sunday family dinner, where Ryan's sister Alyson informed us that this was part of a butterfly Halloween costume. Oh. 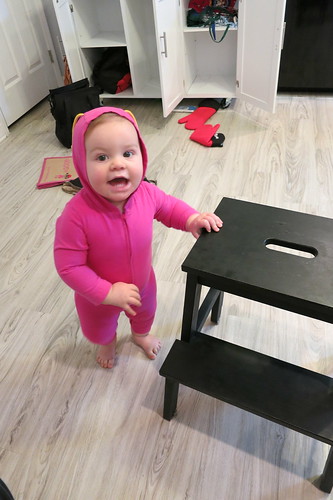 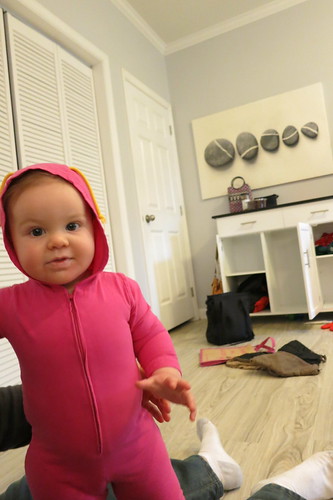 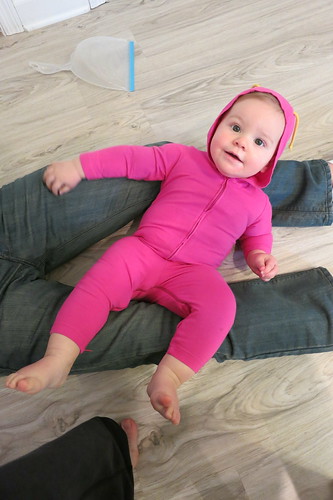