This week, Audra fully switched over to walking, and has barely been crawling at all now (and has mostly dropped the knee-walking too!). So she is just a walkin' fiend now, doing laps all over the place, carrying things, moving things... she even started picking up the pace (already!), and there have been a few running steps mixed in there on occasion. 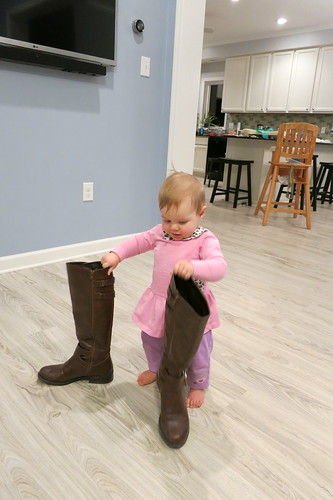 [She apparently needed to move my boots to the other side of the room]
Audra is definitely still in the throes of a clingy phase, which sort of worked out fine last week. For Christmas, my brother and sister-in-law had given us month passes for the pool at the rec center where Josie had her 3rd birthday party, so we are bound and determined to get our/their money's worth from it. Since we are also doing a spending challenge this month (Frugal February!), we decided that we'd use the passes this month, to get us out of the house and give us something fun to do on the weekends now that we won't be going out to eat (or anything else that costs money) for all of February. So we all went to the pool on Sunday for the inaugural pool day, which was a little funny since we went to Ryan's parents' house after naps, ate some dinner, and then left just as the Super Bowl was starting so that we could go to the pool instead ;)

This was Audra's first time in the pool, and she was THRILLED. Best day ever for her. She had lots of fun splashing and walking around the toddler play area, but really decided her favorite was when I put her on her belly and carried her around that way to let her "swim". So she adorably splashed with her hands and kicked (usually with just one leg) as we wandered around the pool, going wherever her little pointer finger was pointing ;) Ryan and Josie have also been going to the pool during the week while I stay home with Audra... so coming back to her being in a clingy phase, this is an ideal situation for Miss Audra right now, since she gets my (almost) undivided attention with it being just the two of us in the evenings. So we eat dinner together, I brush her teeth (which she still chortles for, so cute), then we both clean up all the food she's thrown on the floor (me, with brush and dust pan, her, usually trying to eat everything I've collected in the dust pan), and then I see how far I can get with evening chores before she starts getting too upset. And once that happens, into the carrier she goes, which usually calms her right down. I just can't carry her for too long before it starts bothering my shoulders and back too much. But until then, she peers over my shoulder as I clean up, and throws an arm around my neck and gives me kisses :) 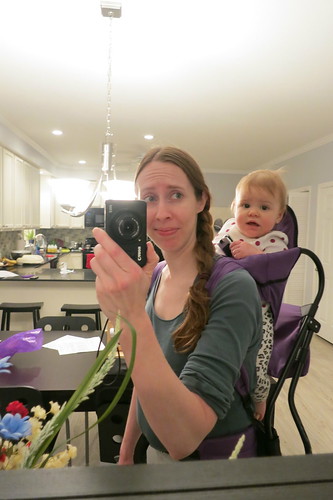 The biggest obstacle for my sleep this week was... my throat. I came down with some other disease last week, and it involved my throat being so sore that I couldn't sleep. So while Audra slumbered next to me, I got to look at her peaceful face, at least, but beyond that was just uncomfortable and frustrated that I couldn't sleep. She did fine last week though - one night where she only woke four times (with an over 4-hour stretch in there), and a couple other nights where she only woke once in a 5-hour stretch. Sometimes I look back to earlier blog posts, and reading the ones from when Audra first started waking so frequently is kind of horrifying, with just how exhausted I was and how much I struggled with it. We've settled into a situation that works well for us now, and I'm so glad I seem to have adapted to waking so frequently (and where I've adjusted my expectations so that a 4-wakeup night is a good one!), since it's really a non-issue for me now... unless I can't get back to sleep. So this week I was back to the horrible exhaustion for a few days, which reminded me just how awful that zombie state was.

This week I also put some shoes on Audra for the first time, and - since she already looked so grown-up - I thought I'd take it even further and stuck her in a proper coat too ;) She doesn't know quite what to make of the shoes once they're on her feet, but she is certainly interested in them otherwise. She has been trying to figure out the velcro, and spent quite a while the other night trying to unvelcro them herself. She also likes to hand me her shoes so I can put them on her, when she then kicks her feet around and takes them right back off again (before handing them to me to put back on her, of course). 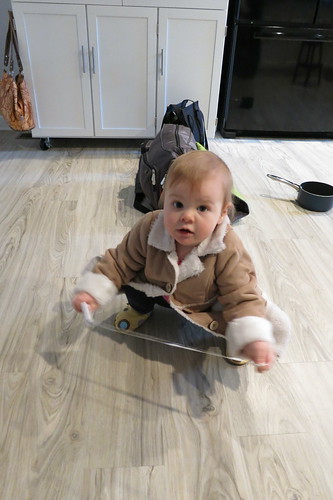 [She had measuring to do, in her new (to her) coat and shoes]

Audra has been saying "uh-oh" preemptively now, which is silly but at least useful so I have some warning she's about to drop something ;) She also has climbed up onto one of the other kid chairs we have that has a higher back, which I noticed when she suddenly loomed over the dining room table the other night... and when I went over to see what she had gotten herself into, I was greeted with the sight of her standing backwards on the chair, holding onto the back as she rocked herself back and forth - crazy kid. She has been playing independently more lately, and happily entertains herself moving from room to room, leaving chaos (or at least a mess) in her wake.

I picked her up from daycare once last week again, and she always seems a little shocked to see me there. She was happy to see me but it seemed like she almost couldn't process it - while I was holding her, she'd be looking away from me for a while before suddenly looking back at me in wonderment, with a big, open-mouthed smile on her face. She does that sort of thing anyway though, which is awesome - I'll be holding her and looking at something else, and suddenly notice Audra has moved so her face is right in front of mine, as she looks at me expectantly, waiting for me to notice her and boop her on the nose :)

We brought Audra along to a birthday party for one of Josie's school friends last weekend, and Audra had a really fun time there too. She walked all over the place, climbed onto or rode some of the smaller toys there, and was quite excited about a tunnel under one of the slides. She followed one of Josie's friends under the slide, and by time I had walked around to the other side, she was hugging the other girl :) Not entirely clear if it was reciprocal, but it was sweet nevertheless ;) 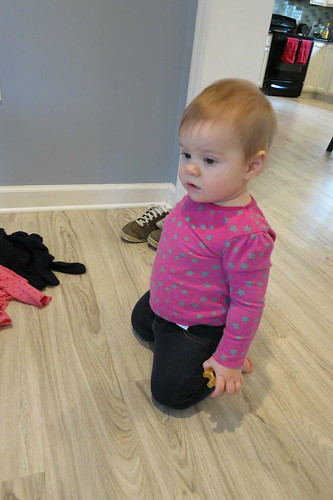 [A little perplexed by Ryan and Josie's shenanigans just off camera] 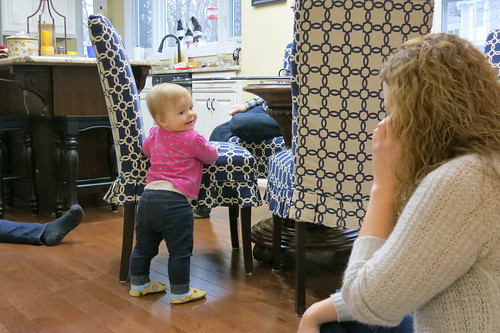 [Playing coy with her Aunt Alyson] 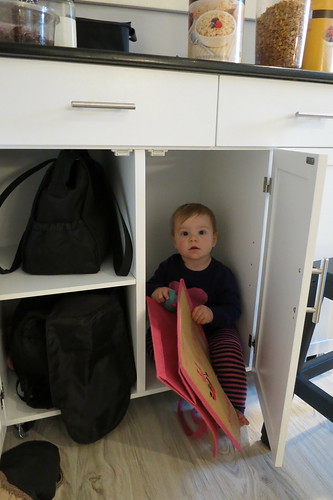 [Definitely not helping with laundry]
at 10:00 AM