Audra was still sick last week, with more coughing and congestion, but at least she didn't sound as croupy as the week before and she seems to be getting better now. I'm still sick, though, and feel like I'm coming down with another wave of illness now, which is mixed in with some lingering sinus issues from the first go-round. I'd much rather it happen to me than her, though ;)

I guess Audra's sleep wasn't particularly notable last week, since mention of it is mostly absent from my notes (and I can't remember anything without it being written down!). So she had possibly one 4-hour stretch at some point in the week, and then had a night where she woke more than normal and seemed to be sleeping lighter than normal...which was the night after I had pizza for lunch, so it appears that amount of cheese and/or tomatoes isn't entirely ok yet. I also tested peanut butter again last week, and that seems to be fine now too (at least in small quantities so far).

Audra seemed slightly less enthusiastic about food than she had been - although one day she ate two clementines, two helpings of yogurt, and a quarter of a cucumber for snack, several of her other meals she only tried a little bit of the food and then just fingerpainted with it or tossed it onto the floor (and then waved bye-bye to it) instead. I did notice another of the very few ways Audra and Josie are alike so far: they both seem to prefer foods more in their "natural" state. So cut up cucumbers are not that exciting, but a whole cucumber is worthy of being gnawed on the whole dinner. Same with apples, apparently, as Audra happily worked on (and ate most of) a whole apple for snack the other day, freeing me up to do yet more cleanup in the kitchen ;) 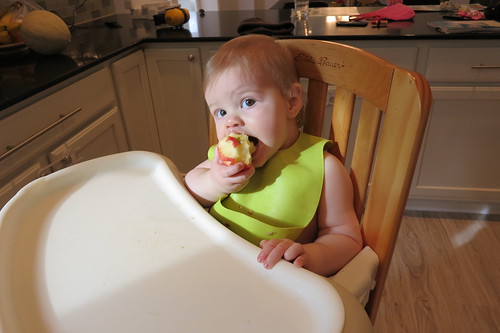 Audra seemed to start calling for us last week, since she yelled "ah!" or "ah-da!" in our direction whenever one of us left the room ;) Books seem especially delightful lately, as she'll bring them up to us to read to her, although they basically devolve into a game of peekaboo for her - we usually get about one page in before she slams the book closed, and then reopens it to lots of giggling. She also has been remarkably persistent in trying to figure out buckles, and spent an inordinate amount of time trying to get various buckles to snap together this past week. She also had a lot of fun playing with us in the evenings, and she has been very generous with her raspberry-blowing lately. Instead of just saving them for me, she has started blowing raspberries on Ryan and Josie too :) The girls found this absolutely hilarious, and also Audra sticking her fingers in Josie's mouth was quite funny... at least until Audra pushed her fingers in too far and made Josie gag :-\ 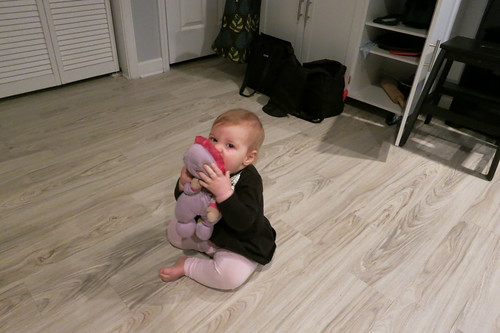 We switched Audra out of her infant car seat last week, which I have high hopes will help with her hatred of the car seat... maybe. She's been doing much better with not screaming in the car as much anyway, but still would consistently fight against being put in the seat, which she hasn't been doing with the new one so far. Maybe that will start up again once the novelty wears off ;) Anyway, it's more convenient for us to switch out who picks her up and drops her off now that we both have convertible car seats in our cars (normally Ryan does both, so he would keep the infant car seat with him), so I dropped off Audra at daycare once last week and got to see her interact with her boyfriend ;) Apparently she is quite fond of one of the other babies there, and when he got up from his nap, she stroked his face, gave him lots of kisses, and then tried to feed him some (fake) lime. So sweet :) 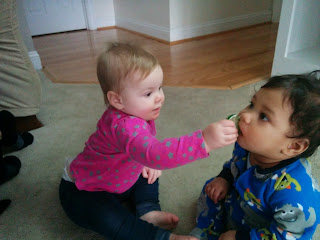 Audra has been walking so much more now, although I still don't have any videos to share - I have one good one of her, but since Josie is dancing around in her underwear in the background, I won't be sharing that one to save Josie from some embarrassment ;) Audra has also been moving things around a lot too, with rearranging furniture and pushing boxes/safes/etc from one room to another. This may or may not be related, but I suspect all this walking has triggered some insecurities for her too - as her world has just expanded significantly, she needs more anchoring and reassurance too. This, of course, seems to mean that she needs to stay close to mommy, so we're going through another clingy phase. At least it only took me a day to realize it this time, so it wasn't a week of me getting frustrated at my inability to do anything without a baby attached to me! So Audra is crying whenever I put her down now... or really whenever I'm not holding her or sitting on the floor with her (even the couch is apparently not ok). Ryan is not cutting it for her either, so I ended up strapping her on my back the other night as I cleaned up the kitchen, where she immediately calmed down and then was perfectly content (albeit a little squirmy since she was trying to see what I was doing) for quite a while. She laid her head against me a few times too (so sweet!), which I find funny when she does that or just has moments of stillness since she is usually just a bundle of constant energy and motion. I also love it when she flings herself onto me, laying back against me or laying her head on me with her arms wrapped around my neck (yes, she gives the best hugs). :) 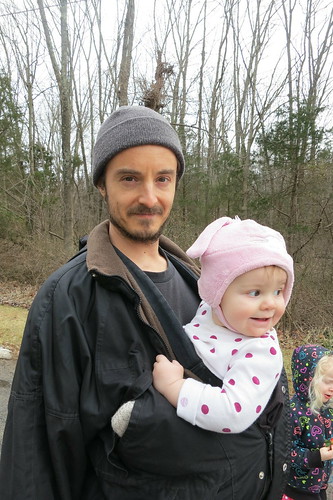 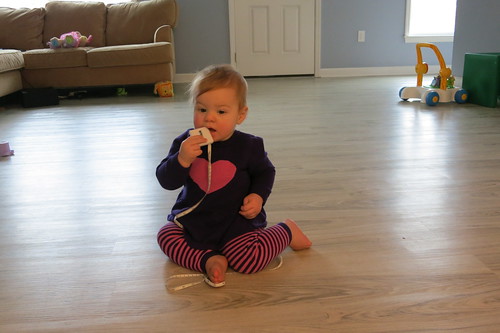 [One of her favorite toys is a tape measure] 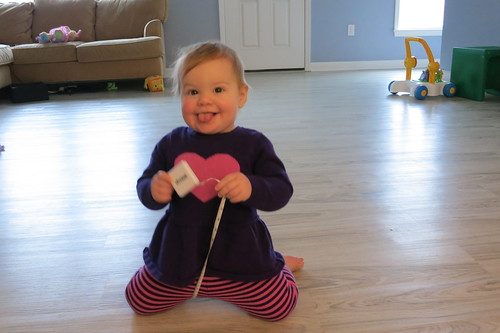