Oh, Audra. This little baby keeps us on our toes :) Perhaps not coincidentally, this week I started practicing yoga again, drinking beer (exactly one so far), and even had a cup of caffeinated tea (gasp!). There was really no reason I needed to abstain from alcohol and caffeine while nursing (at least, in the small amounts I normally drink), so I guess, 10 months in, I finally felt comfortable enough to cut loose a little bit ;)

The pumping situation is maybe improving from last week? I was still pumping at least a bottle (4oz) less than I needed each day, so I started taking Fenugreek and within hours I was already pumping more. That seems a bit unlikely that it would have an impact that quickly, but even if it's just the placebo effect, I'm ok with that ;) I've also been testing chocolate this week and it doesn't appear to be causing any issues for Audra, so it looks like I'm good to eat chocolate again too :) Josie will be so disappointed as she has been able to lay claim to all the chocolate that enters our house up until this point since she knows I couldn't eat it because it "upsets Audra's tummy." ;) So I think next up is testing strawberries and peanuts, and then I'll give it another month or so before I try eggplant and dairy, which are the last two things I've been avoiding and which had caused the most issues for her anyway.

Audra's sleep was - as usual - all over the place this week. She apparently had more playing she needed to do whenever I tried to put her to bed, since her naptime and bedtime sometimes extended for hours as I would keep trying to nurse her down and she would keep popping up with a grin on her face, aggressively blowing raspberries on my belly (or just slapping it - thanks, kid) or giving me kisses on my nose (which still entail just putting her mouth around my nose, sometimes with a rather disgusting amount of saliva involved too). And some nights she woke every time I shifted and wasn't able to get herself back to sleep at all... and then she had one awesome night where she woke a couple of times but got back to sleep on her own, and ultimately didn't nurse from 9ish until 3am.

Audra keeps plugging away at trying to walk, with taking a few steps on her own at a time, including a couple of times towards Josie (who I think doesn't quite understand the impact - good or bad - this will have on her quite yet!). Audra has also started climbing now, which is... startling. She has been climbing on stools lately, and climbed right up on the platform part of our bed the other day (which scared me to see her head pop up over the side of the bed, since she suddenly seemed so much taller!). She also climbed onto her walker, and alternated standing on one leg on it with rocking it back and forth in a rather impressive display of balance.
Audra just loves eggs, and was diligently feeding herself lots of eggs, some bacon, potatoes, and cantaloupe when we went out to dinner on New Year's. She also is very interested in using her own spoon and fork, and tried to scoop yogurt out of a bowl on her own with a spoon, and (adorably) would touch each piece of egg to her fork before putting it in her mouth :) She also still loves getting her teeth brushed... it must feel good - or at least tickle - since she gets excited when she sees the toothbrush, opens right up, and laughs as I brush her teeth :) 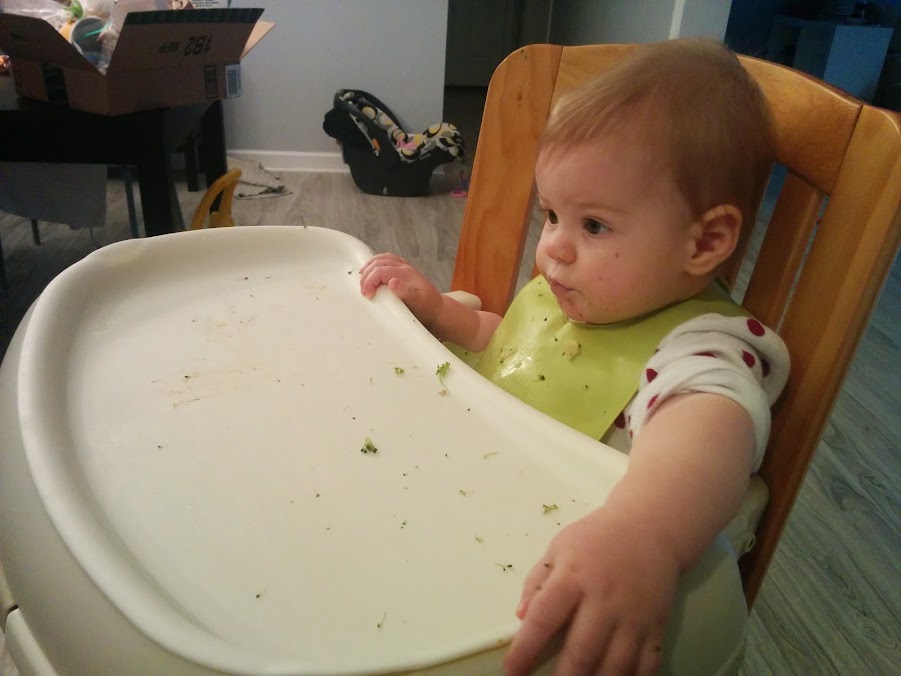 Audra continues to be more playful - and downright funny - as she comes up with little games that she finds hilarious. Like, for instance, when she squashed her nose against the mesh screen of the bed rail and then started laughing at herself (and had us all laughing too). She also seems to be playing with us around the stairs, since she'll crawl right up to them and seems to wait for us to tell her no, and then she peeks at us with a big smile on her face before actually trying to start climbing the stairs. She had a lot of fun with my mom the other weekend, being super happy and just wanting my mom to carry her around and bring her up to the various things she pointed at. Audra and Josie have been playing hard in the evening lately, with favorites being the jack-in-the-box they got for Christmas (that Audra can even crank on her own, a little bit) and Josie giving her pretend cake to eat from her hand (which Audra found very funny). I also continue to have grunting conversations with Audra (where we clench our fists and grunt at each other with utmost intensity), and now we have fake cough conversations too :) She also loves it when I mimic her flailing and lightly slap her hands or tickle her belly, and she gets really excited and kicks a lot :)
As far as language, I'm still pretty sure she's attempting to say "Audra" and "ducks", and also sounded like she tried to say "thanks" and "hi" after I did a couple of times. Oh! And she added "mama" to her babbling now (along with "baba" and "dada"), which I'm obviously a fan of. She also still likes it when I sing to her (usually the main way I try to head off her screaming in the car), and I find it funny that she appears to have selected "Wake Up Exhausted" as her song, since that's the one she calms down and/or laughs for. I tried "You Are My Sunshine" (which is Josie's song, anyway) or other baby songs, but she went for the one that has the most fitting title for this time in our lives, I think ;) 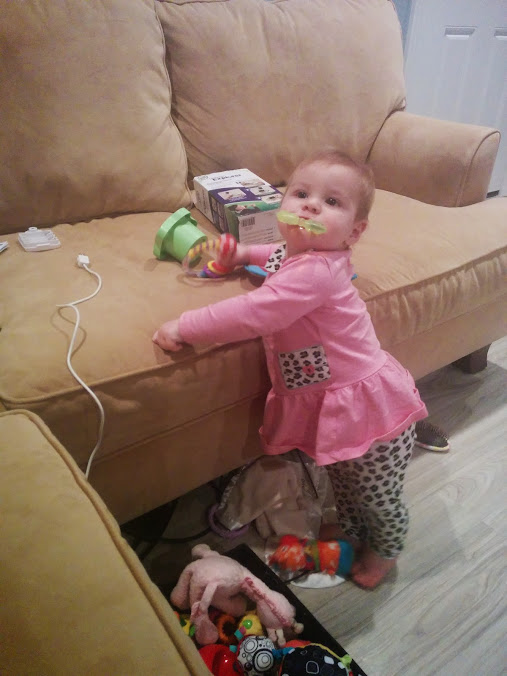 [Being goofy but actually chewing on a teething toy for once ;)]
[Making sure she gets every last morsel of food]
at 4:06 PM