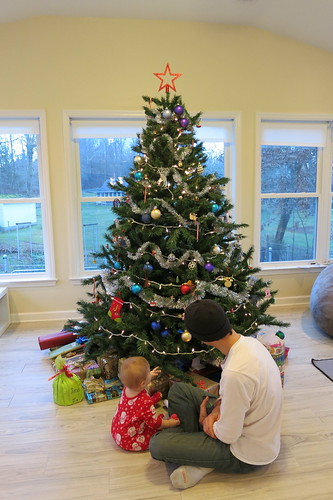 We dressed Audra up as an elf again (because really, she makes the perfect elf), opened presents at our house in the morning with Ryan's family, and then went over to Ryan's parents' house for dinner after naps. Audra was remarkably into opening her presents, and applied her trademark persistence to tearing off wrapping paper and otherwise getting into her (and everyone else's) stuff :) She instantly understood how her glockenspiel worked, and was perfectly happy whacking away at that for a while, although she was less enthusiastic about her new baby doll than I was expecting, given how much she lights up whenever she sees Josie's. 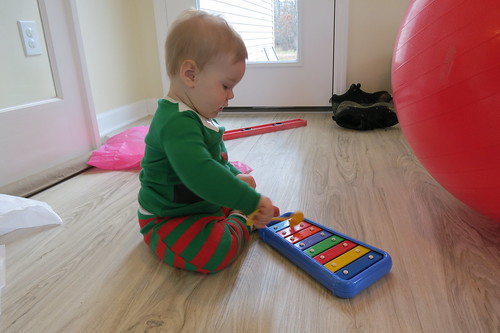 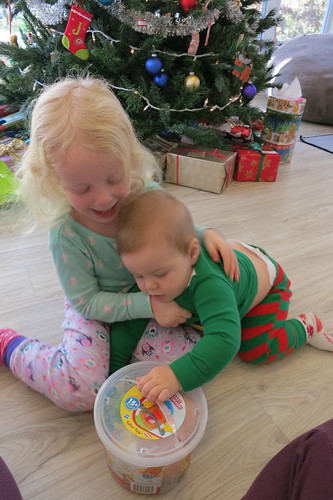 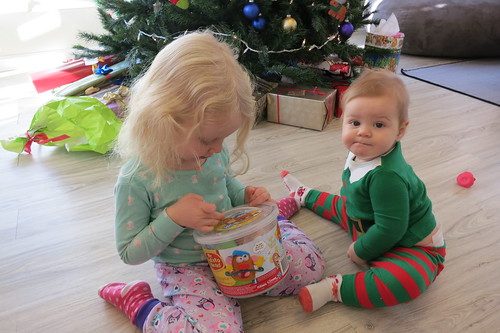 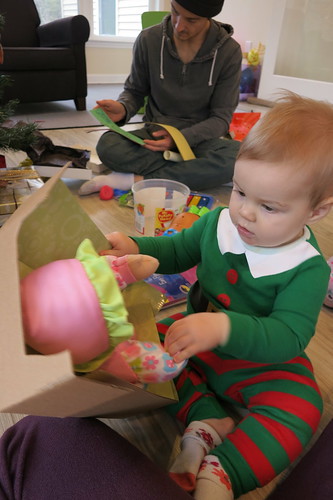 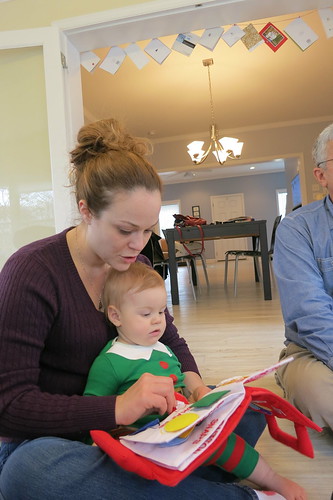 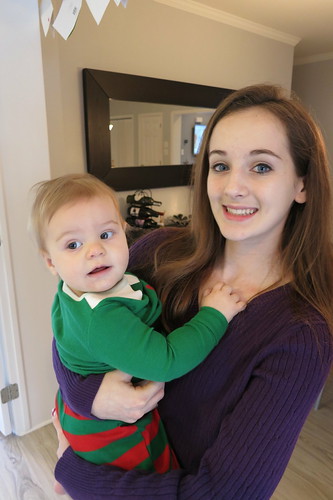 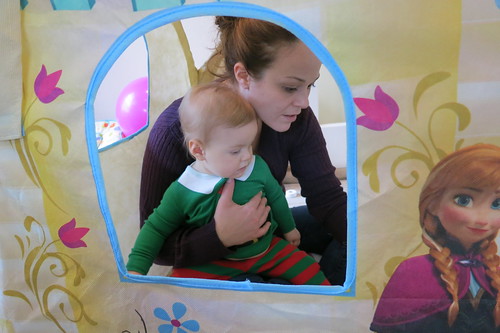 [In the princess castle with Aunt Alyson]

Audra really does quite well when she's passed around, and so she did wonderfully at Ryan's parents' house in the evening, where her feet barely touched the floor the whole time we were there :) She had only taken a short nap before we went over there, so I think that really helped - but regardless, she was happy, ate really well for dinner, and then fussed for less than 10 seconds in the car before she fell asleep on the way home.

As far as her walking, last week she had taken her first steps unassisted after we had stood her up and then encouraged her to walk to us. This week, she seemed to cross a (perhaps arbitrary) line to where we have decided she's WALKING! since she has now taken steps completely on her own - she stood up herself and then tried to walk to where she wanted to go, regardless of if we were there too.
This week we gave the girls a bath together for the first time, which also marked Audra's second bath ever (and the first one was when she was a newborn, so she didn't get to sit on her own and play). Audra and Josie were huge fans of this development, and had a grand time splashing each other, eating bath toys (Audra) and spelling words with the bath letters (Josie)... at least, until bathtime ended, and Audra gave me a seriously reproachful look as I pulled her out of the tub. In other sisterly news, we put Josie in charge of giving Audra yogurt a couple of times, which suited both of them just fine. Audra's little kicky feet were going the whole time (which she does when she's happy/excited) and Josie was squealing "good job, baby!" with each spoonful Audra happily took from her :)

Speaking of yogurt, Audra now seems to be tolerating some dairy! This is a relief to me, not only because yogurt is her favorite food in the history of all things edible (this is the only food she cries for when it's all done!), but hopefully that means I will be able to eat dairy again myself too (I really just want a milkshake). I've tried having some butter, and while she still spits up some afterwards, it's not too bad (and it may or may not be related anyway). So Audra is doing well with increasingly large amounts of yogurt, and has also tried cheese without any noticeable issues.

Audra has definitely started waving now, and it's just adorable as she waves to us, herself, the baby monitor, etc. Her peekaboo skills have improved, and now she (usually) covers her eyes until we say "peekaboo!" and then she'll uncover her eyes and giggle :)
I came down with another stomach bug last week, and while it seemed like it was mostly gone after the first 24 hours (during which I could barely eat or drink), I still felt sick and had headaches and a decreased appetite the rest of the week. Luckily no one else at the house got it, and the biggest issue now is that my supply has taken a definite hit. So now I haven't been able to keep up with as much milk as Audra needs each day for daycare, and have had to thaw out 2-5oz each day to make up the difference. I had hoped that her eating more solids would decrease the amount of milk she needs and lessen some of the pressure on me to keep up with her, but not yet apparently! So now I'm hoping to still get my supply back up again (although I'm over a week in at this point, with no improvement), but I have enough frozen milk to hopefully get us through a couple more months until we planned to start her on cow's milk anyway.

Audra did fine with sleep for the week - she had a couple of really good nights (going for 4-5 hour stretches) mixed in with less-than-stellar nights where she wanted to nurse most of the night and woke crying whenever I shifted. Her naps are probably the most consistent they've ever been, with her usually taking a single 3-hour nap with me starting around 11am, although she has also had days where she only slept half that or taken a 2-3 hour nap and then still needed a shorter nap before or after the big one. 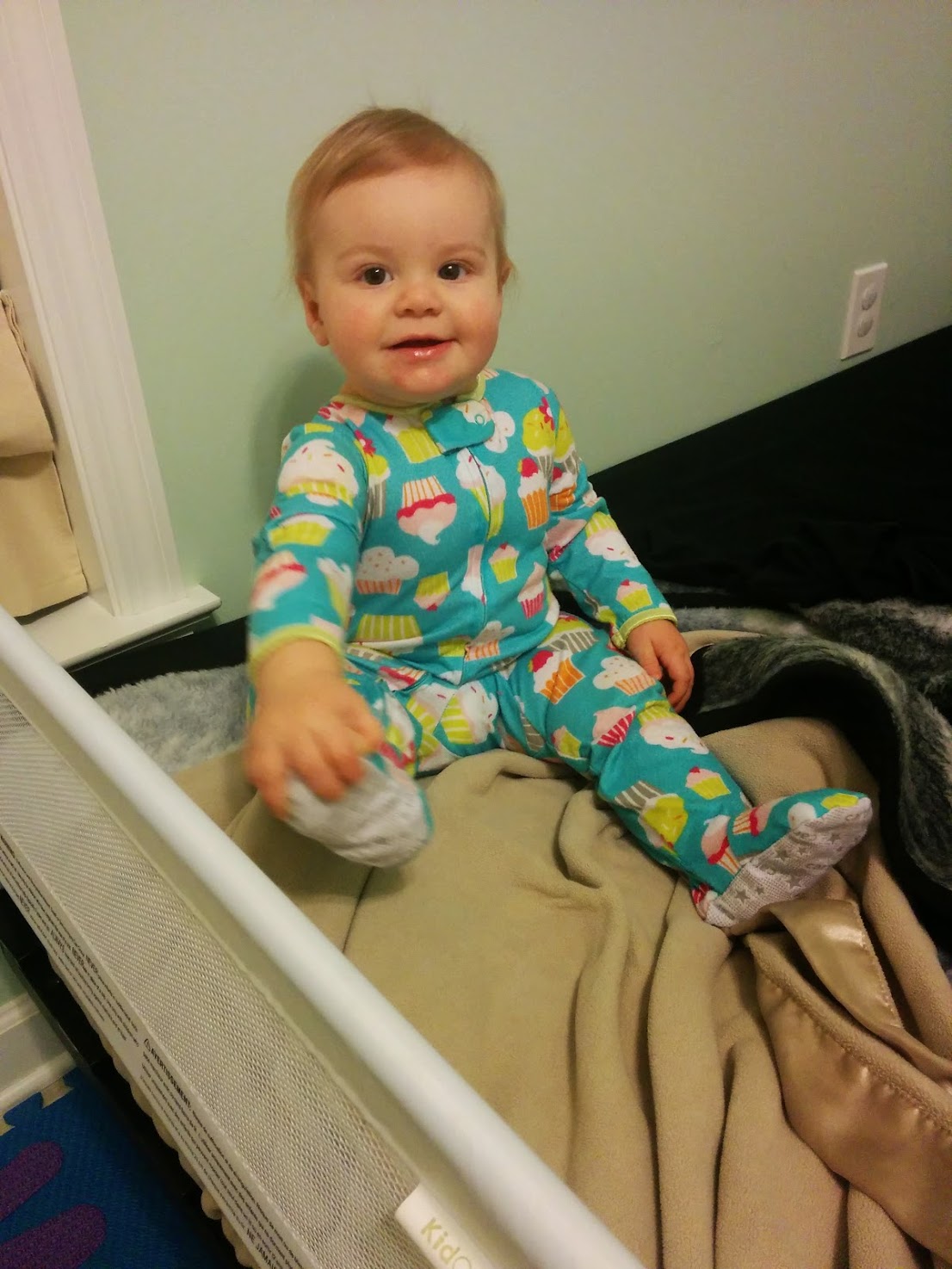 Audra transitioning down to one nap is also a huge relief for me, since that means we're that much closer to being able to get the girls on the same nap schedule... which means I'll be able to see Josie (and Ryan) more... which also means that the girls can entertain each other. It turns out it's actually easier to watch both of them at once at this point, since they both just seem happier when the other is around :) 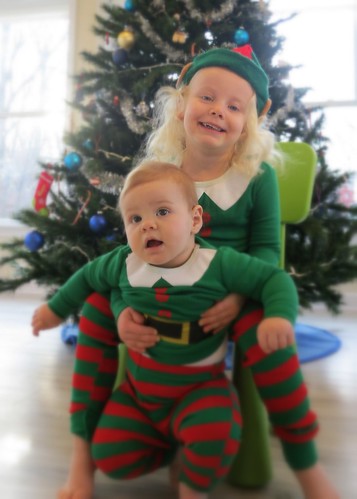 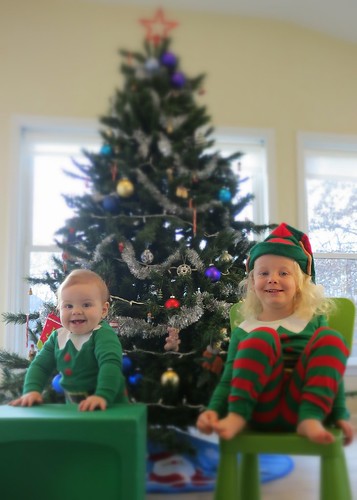 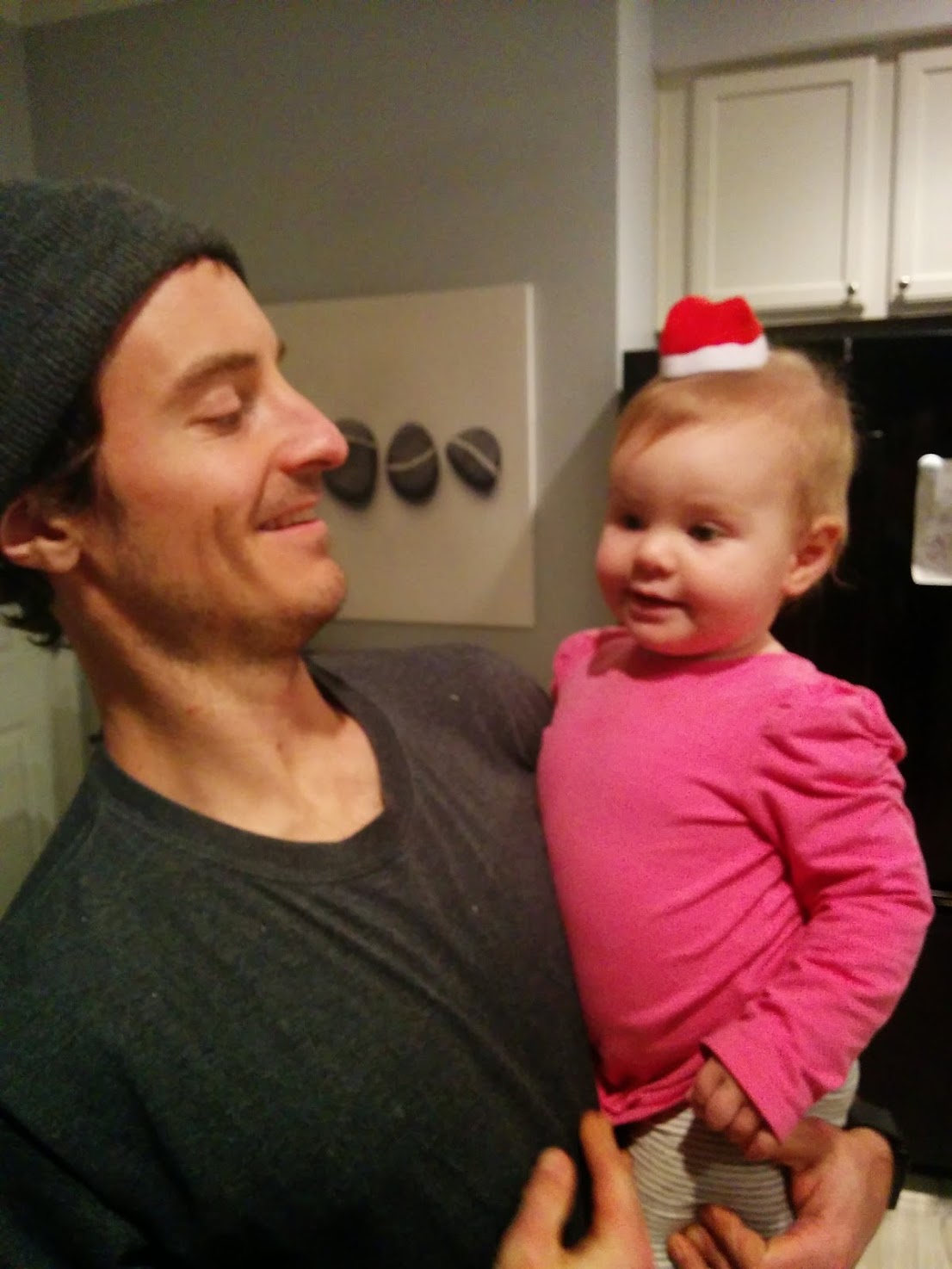