Although it's over a month later (turns out it's really hard to keep up with writing with two kids, the holidays, and a busy month at work!), I can now confirm that we had a really nice Thanksgiving ;)

Josie had a luncheon at her school the week before Thanksgiving, which went sooo much better than last year's. She was still getting used to her new school last year and her language skills weren't as good, so leaving her (sobbing) after the luncheon so she could attempt to take a nap in a room full of other (sobbing) kids was heart-breaking. But this time we were able to explain to her that we would be coming for lunch, leaving afterward to go back to work, and then would be back after nap time like usual. Being able to prepare her seemed to work really well, since she squealed and ran up to hug us both when we got there, saved us seats next to her (so cute!), did well eating, showed us some of the stuff around her classroom, wanted to be held just for a little while, and then happily pushed us out the door when it was all done.

For Thanksgiving proper, we hosted for both sides of our local families again, and everything went off without a hitch (with no side dishes discovered after everyone had left like last year!). I'm not sure if I can entirely blame this on the fancy new meat thermometer Ryan splurged on, but it possibly made a huge difference that we knew immediately when the turkey got up to temperature so we could pull it out and just keep it under low heat until everyone got there (it ended up done almost 2 hours earlier than usual too - maybe from not opening the oven a bunch of times to check the temperature?), since it was remarkably moist and delicious, even in leftovers. Josie had fun playing with her cousins, with Taylor braiding her hair into an "Elsa braid", and coloring and drawing with Christian. She got to sit up with her cousins at the "big kids" peninsula (for the first time without any parental hovering!), and claimed she was thankful for Mommy, Daddy, and Audra :) 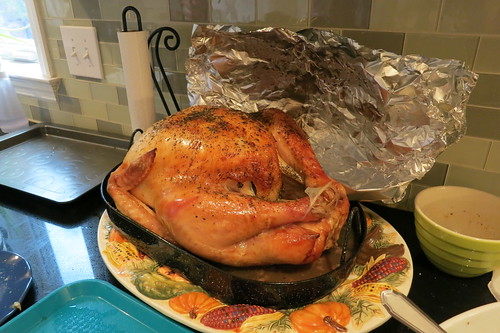 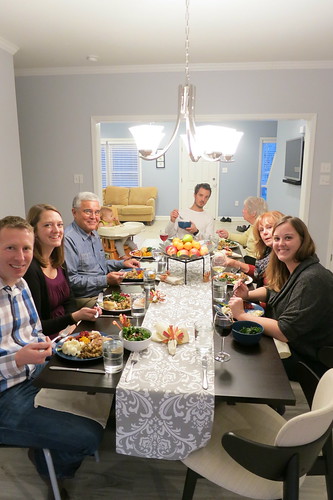 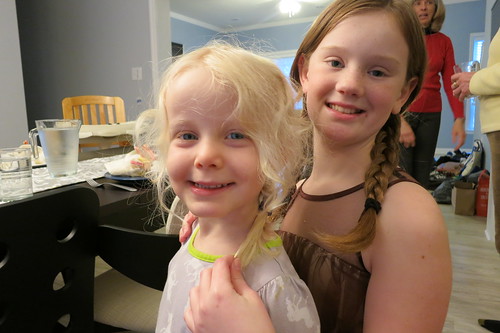 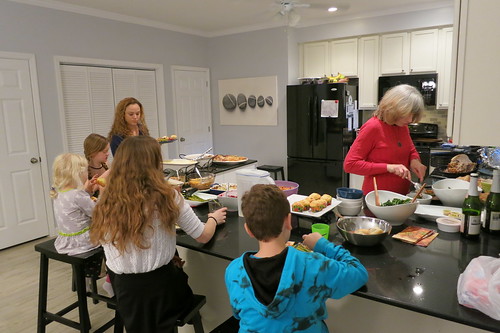 Ryan and I actually both had off the day after Thanksgiving, so Josie was excited to get to go to "baby school" with Audra while we spent the day relaxing at home... by going outside in the freezing cold to build a greenhouse. After quickly settling into the most optimal division of responsibilities (I was in charge of the instructions and setting up the parts, tools, and hardware for each step, Ryan was in charge of putting it all together), we got it almost finished after working on it all that day and for a few more hours that weekend, with just the doors and windows remaining. We actually just got the doors installed and windows fixed last week, so now we have a greenhouse! We're not sure what we're going to plant in there yet, but we can figure that part out later ;) 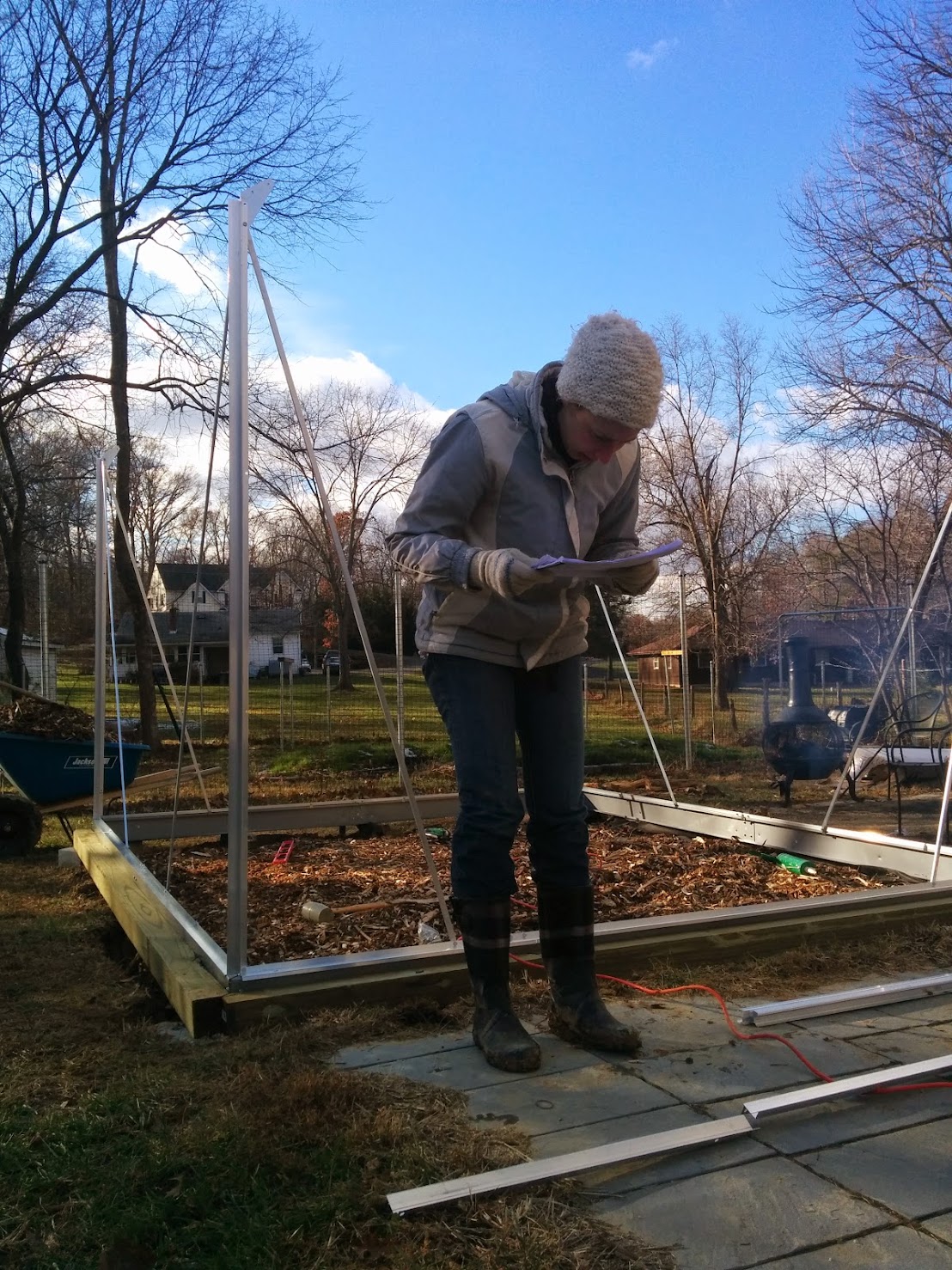 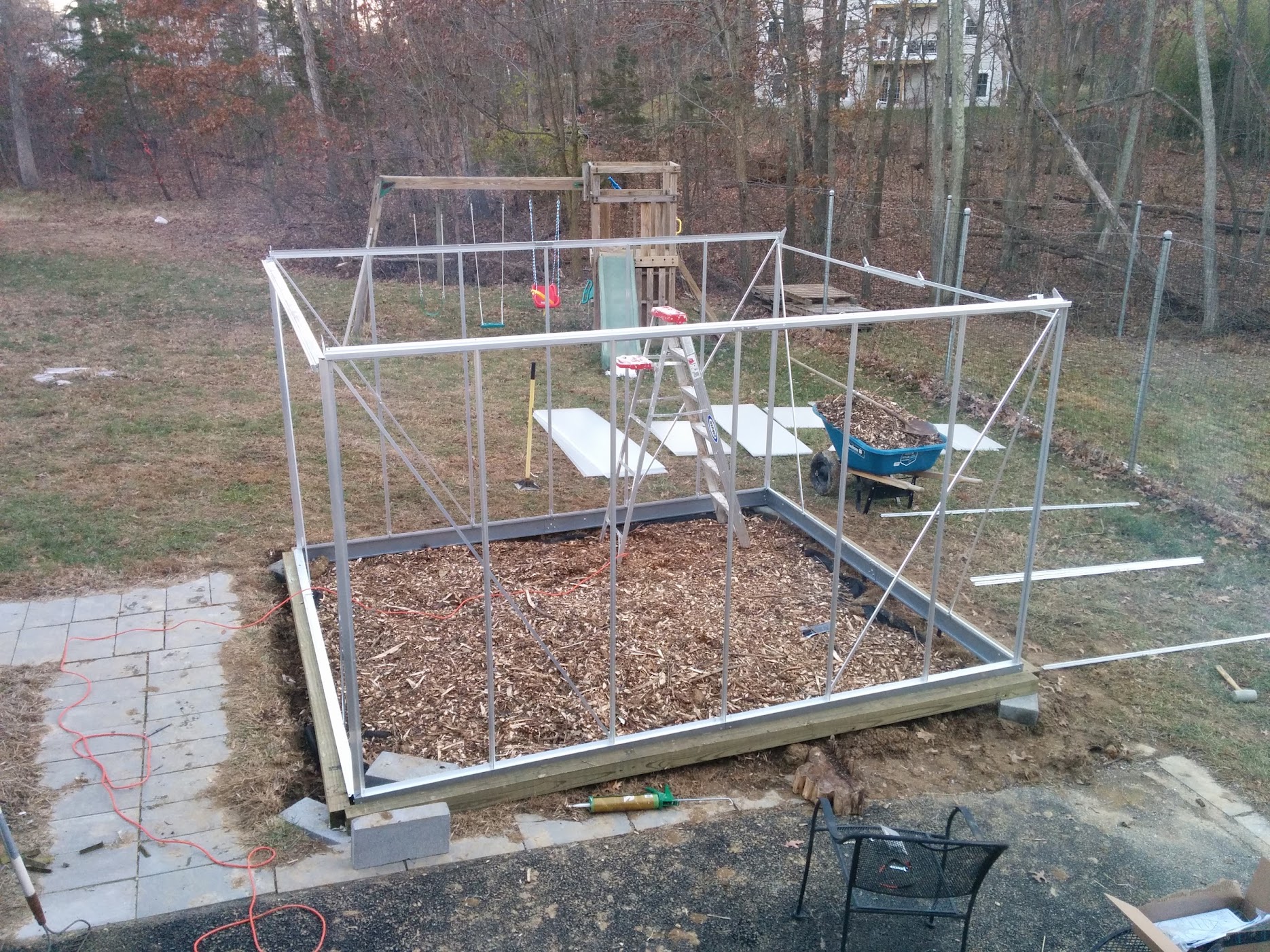 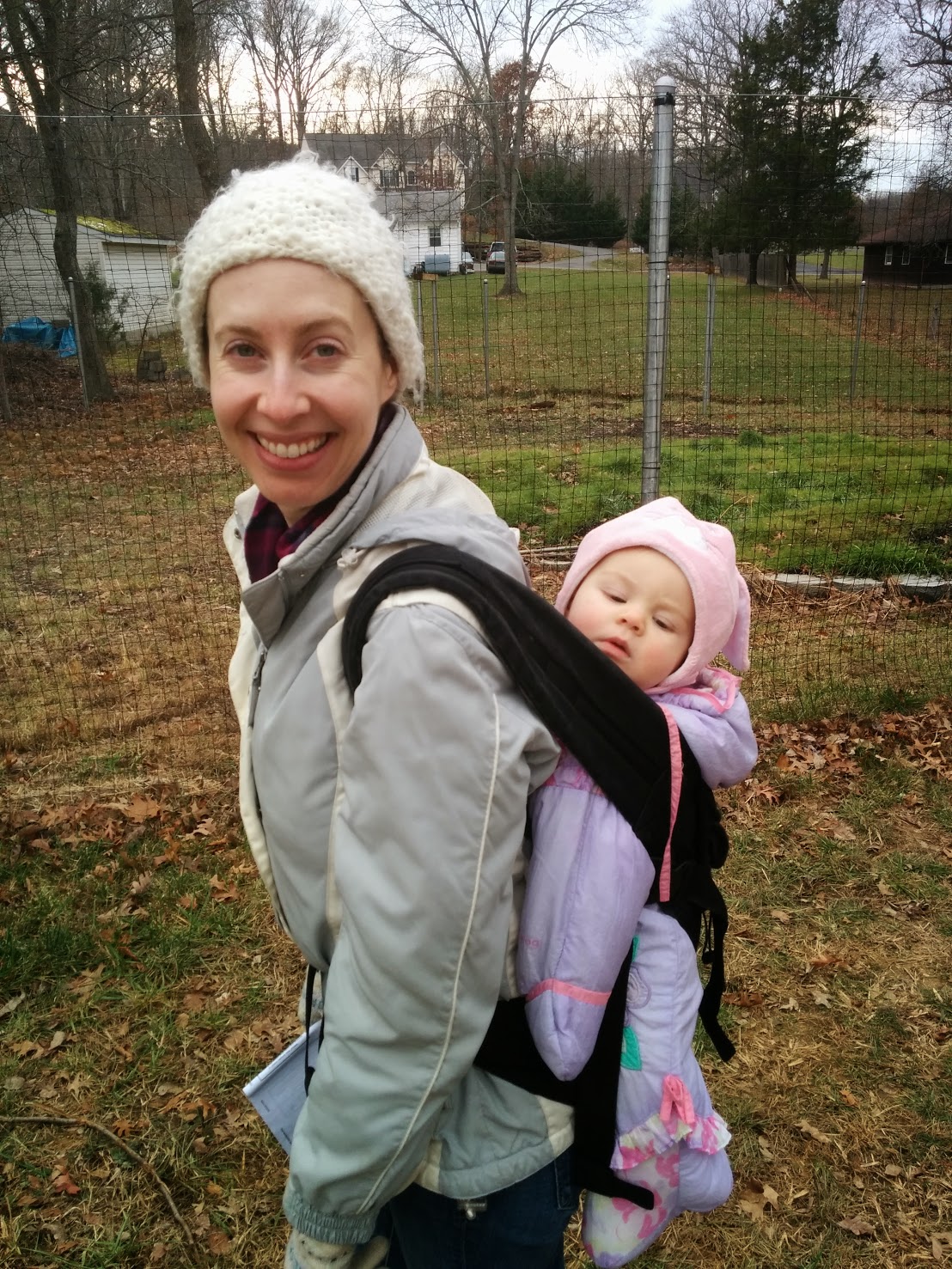 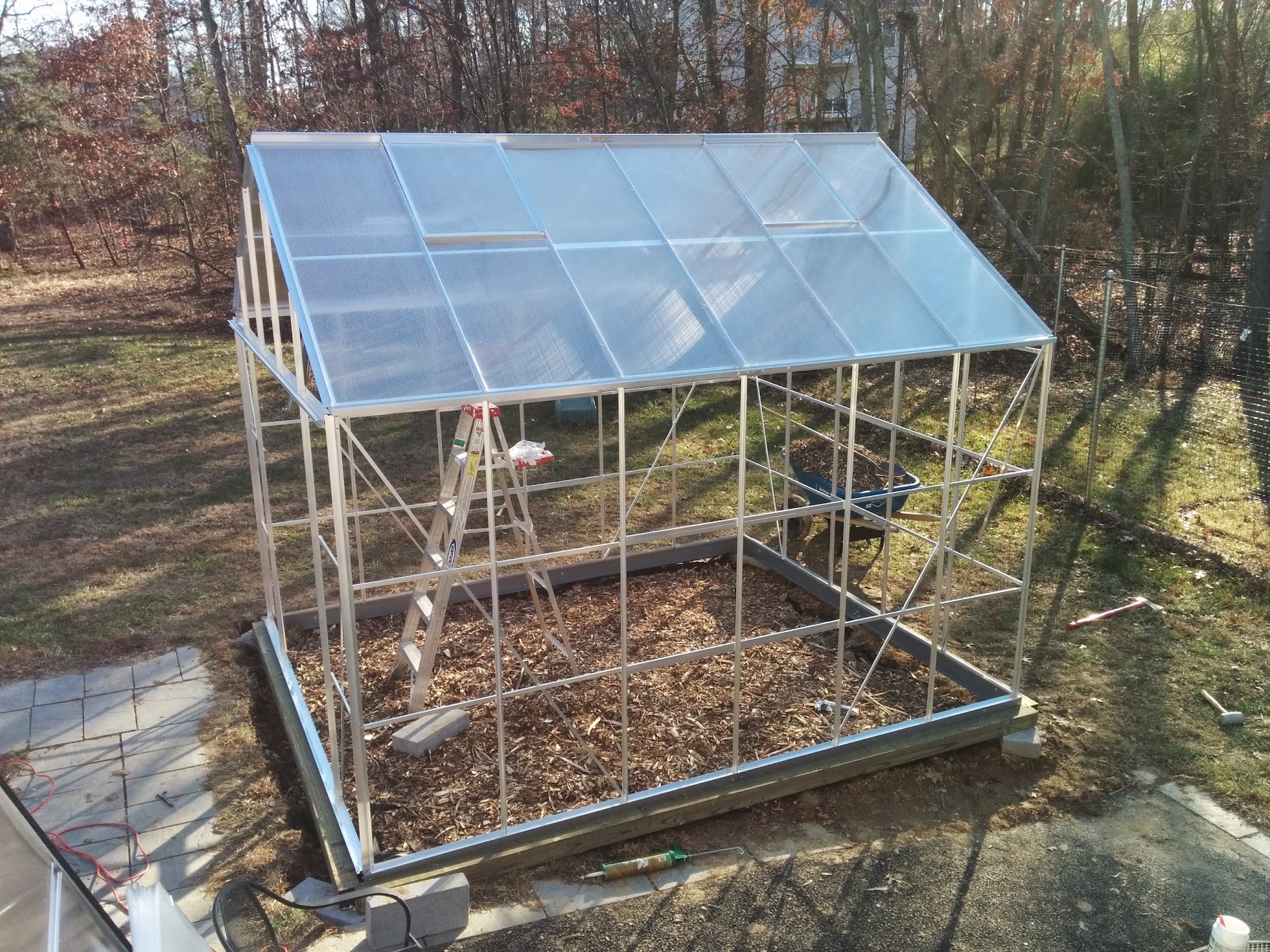 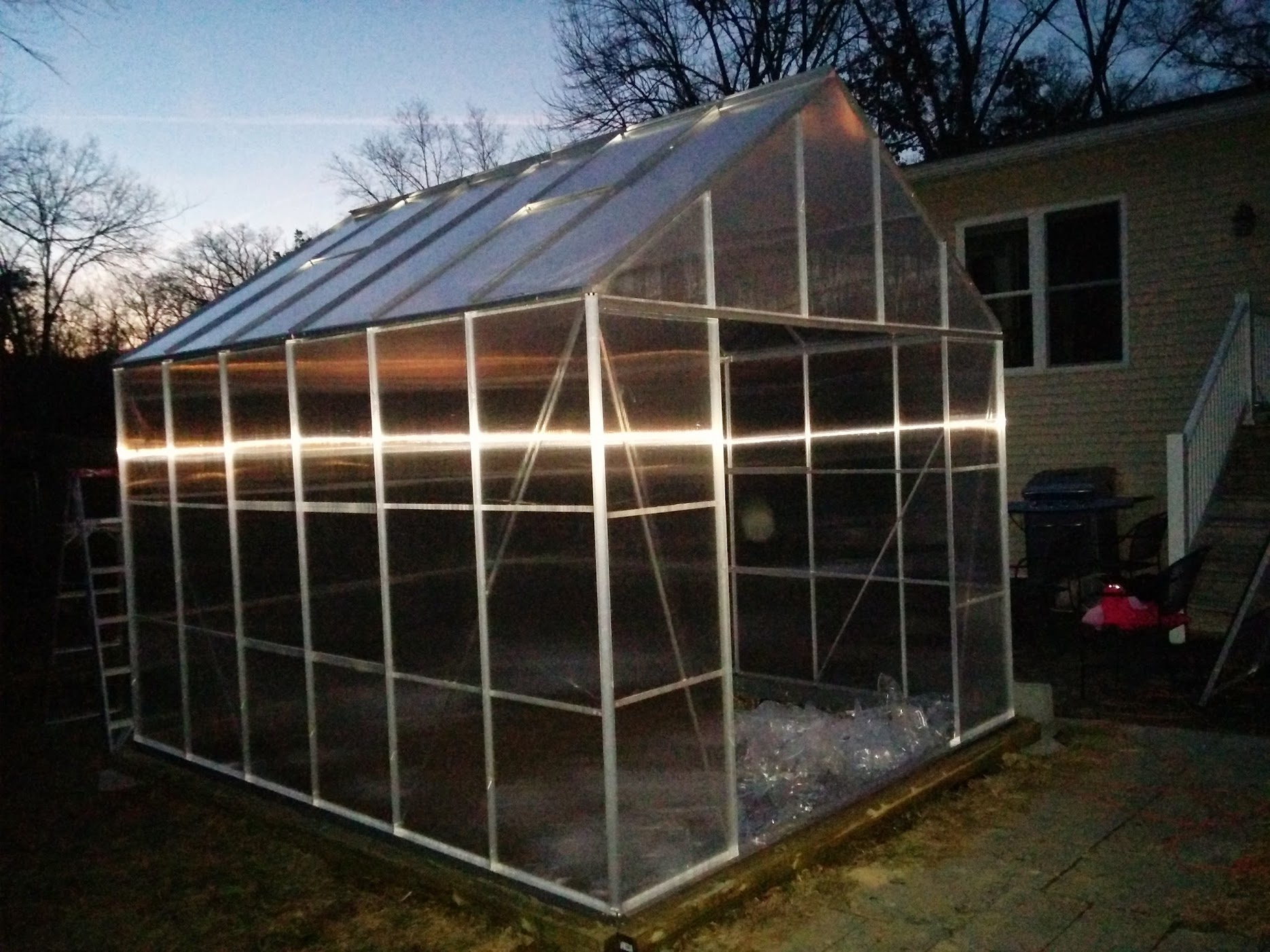 One of Josie's "firsts" for last month was going with me to vote. She was very excited to go to the "grown-up school" (our voting place is at a university), and adorably started whispering when I did once we got to the voting room. She did very well entertaining herself while I voted, appointed herself the carrier of the directions sheet, and helped feed the ballot into the box when we were all done - when she was quite happy to receive an "I Voted!" sticker for her efforts ;)

She also had her first official play date, which she kind of pushed me into organizing for her after she and her friend had decided on their own that N. was going to come home with us after school, which led to some shenanigans several days in a row as I tried to get out the door with only my kid in tow. I figured if they were going to put that much effort into having N. come over, I could at least try to actually make it happen :) So we set up a play date for the next weekend, and Josie was so excited for N. to come over after their naps that Josie barely slept and then she came out of her room on her own afterward (still a rare occasion). They were both a little shy at first, until a switch suddenly flipped and they both started running back and forth, from where we were in the sun room to the living room to bounce off the couch there, screaming with glee the whole time. They did very well playing together, and once Audra got back from her walking nap with Ryan, they included Audra to some degree as well - N. was enthralled with her, and Josie suddenly started laying more claim to "her baby" than she normally does ;) 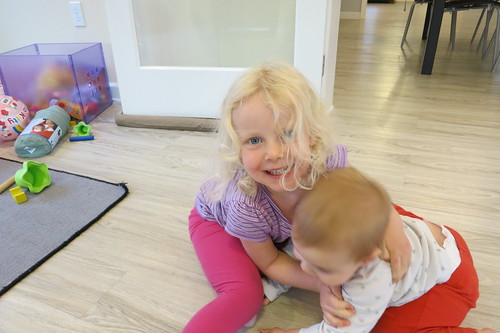 We also had some friends over for dinner one night, and Josie had a lot of fun playing with their kids, particularly the youngest, who is about a year younger than Josie. They stuck together, running around and doing stickers, then running races outside in the dark too... which was fun until Josie inevitably fell. I had been thinking about turning off her nightlight in her room, but after that experience and her plowing right into the door when the light turned off in the garage one night, I'm thinking she's perhaps not ready for that yet. Anyway, we were all outside toasting marshmallows, which she turned down at first, then decided that she would try after the oldest of the kids explained exactly what a s'more was to her. After eating a couple, she was quite thankful that he had convinced her to give them a try ;)

Speaking of sweets, Halloween just about drove us crazy. Josie is normally a very good eater, but we couldn't quite find a satisfactory way to deal with the candy she got for Halloween. She was fine with only having one piece a day, but no matter if she had it before, after, during, or nowhere near a meal, she devolved into basically taking a "no thank you" bite of each thing on her plate for her actual meals and then calling it good. I took several passes through her candy to thin it out (gradually leaving her with one of each thing and bringing the rest to work), and it still took over a month to get through all of it... and with her annoying eating, it seemed to take all the longer. But then she would also decide whatever I was eating was infinitely more appealing than the (usually comparable) food on her plate, and tried to convince me through flattery to give her my food ("I like your carrots, Mommy, they're so beautiful").

We also had our very first parent-teacher conference last month, which Ryan went to (and recorded for me) while I stayed home with the kids. Her teacher confirmed that Josie is doing very well, and does a good job advocating for herself. She's doing particularly well with her letters, and can now write "Josie", "Mommy", and sometimes our last name on her own ("Audra" is taking a bit more time!), and a favorite pastime lately has been for her to announce different words for us to spell so that she can write them. 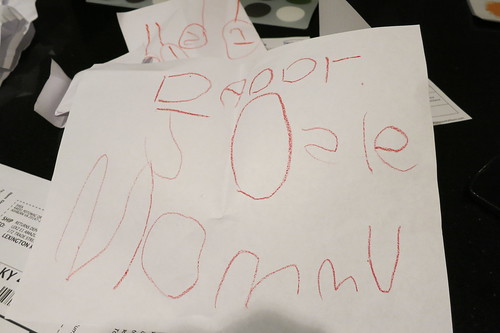 Menus are much more interesting now, as she pointed out different words for us to try sounding out together. She also likes finding letters in different ways (e.g., a "J" formed from a piece of spaghetti), and is having fun picking out the letters she recognizes in signs. She also seems to have a quota for pictures (or fans) she must make in a day, since each day we end up bringing a pile of paper home in her backpack. But it's hard to mind when her pictures are so adorable (and happy!) :) 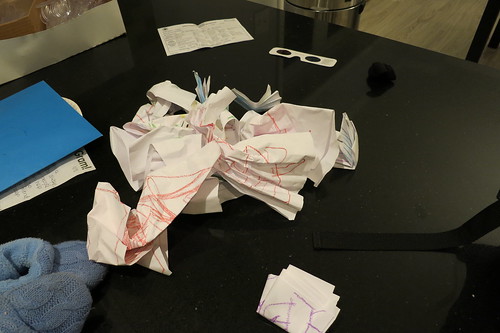 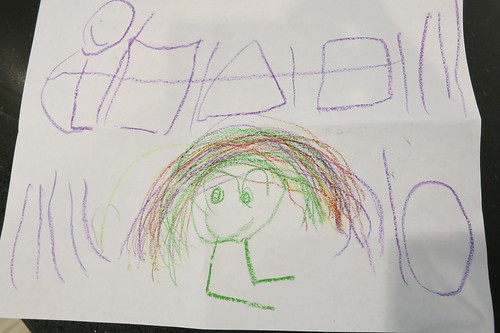 Josie seems to be on the cusp of "getting" puzzles now, since she started doing so much better just over a matter of a few days with matching up colors to figure out how the pieces fit together. She also continued to be really into blocks last month, building lots of castles and telling me it was for "decoration" for my birthday - and one time she added to that by saying she had to go get food for my birthday upstairs in her kitchen. When I told her she didn't have any food up there, she put her finger under my chin, said "I promise, I have real food in my kitchen," then flounced off to the stairs. Well then. 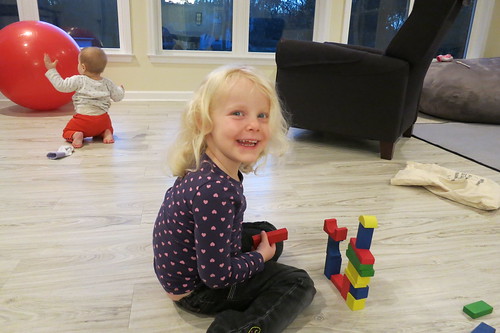 Josie has been very good about sharing things with Audra lately (as long as it's on her terms!), and has just been very sweet with her in general. She has been telling Audra she loves her and gives her hugs without any prompting (which Audra still isn't too sure about, probably because they usually resemble a headlock), she squealed over how cute Audra's little baby feet were with me, and she really liked being able to hold Audra's sippy cup for her as she drank from it. 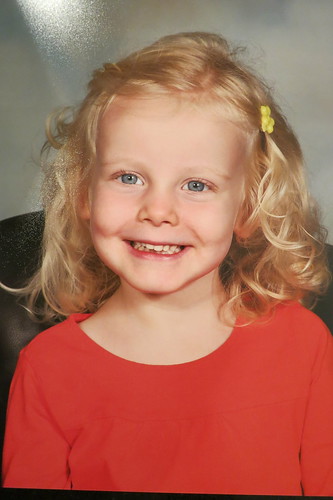 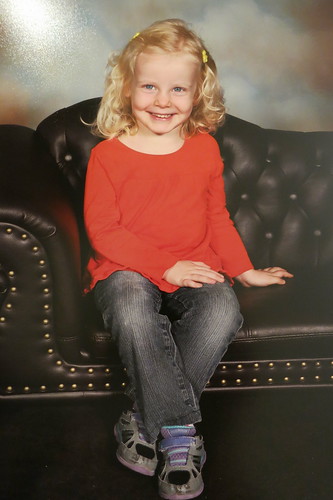 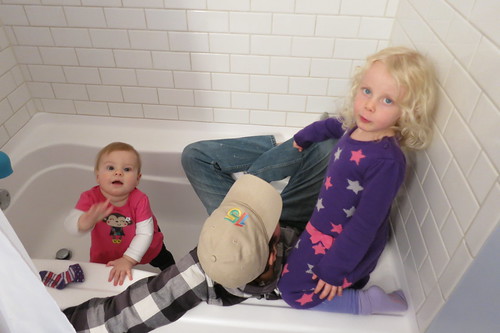 [Hanging out in the bathtub, naturally] 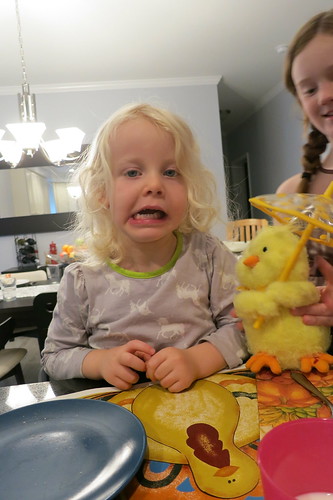 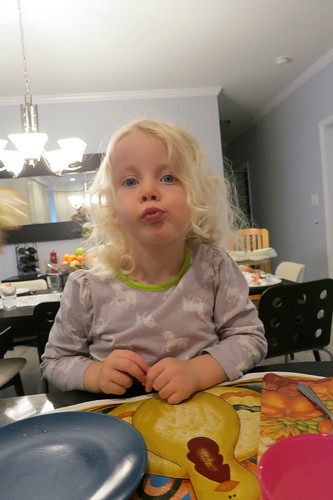 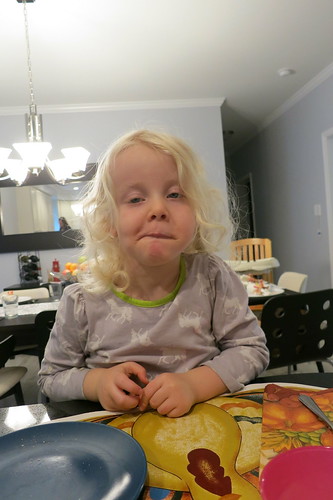 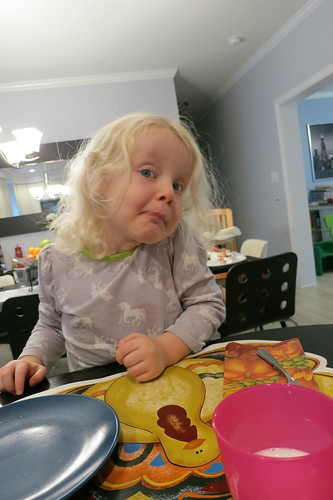