As of this week, Audra has now been an outside baby longer than she was an inside baby :)

In addition to that milestone, she also took her first unassisted steps! :)  Ryan stood her up a few feet away from him, and while she normally stands for a couple of seconds on her own before dropping down to crawl towards him, several times she instead took a handful of steps on her own - it was adorable to see how proud she was of herself! :) Alas, no pictures or video, though, since she wouldn't do a repeat performance once I grabbed my camera. She is also starting to cruise now, walking herself around with the help of our furniture.

What else? I'm becoming even more convinced that she is saying her first words. She very clearly said "da" ("duck"?) as I brought her up to her duckies picture the other day, although if her "ah-da"s are actually her saying "Audra", then that one's really the winner as her first word since she's been saying that for months.

We gave the ok to daycare to start giving her solids there - we had been holding off until we could introduce more foods ourselves so we could watch her for allergies (so far, she just appears to have a contact reaction to garlic) and until we felt more confident in her ability to feed herself without scaring her caretakers (she still gags quite a bit, which is perfectly fine but can look like choking). We had already introduced most of the foods they feed there, so we sent along a list of foods to avoid for now, but just decided to let them feed her instead. We'd rather her feed herself rather than be spoonfed, but she really, really wants to eat people food with the other kids, so we're going with it for now, and continuing to have her feed herself at home at least. We also started brushing her teeth (just with water), and she's actually pretty good about it. She lets us do it for the most part, then will try to brush them herself too (and actually, she tries to brush her own hair whenever she gets her hands on Josie's brush - so cute!). I also have a newfound appreciation for her toothbrush, since it entertained Audra the other night for long enough for me to actually be able to clean up the kitchen without her ever-so-helpfully climbing into the dishwasher like she normally does. 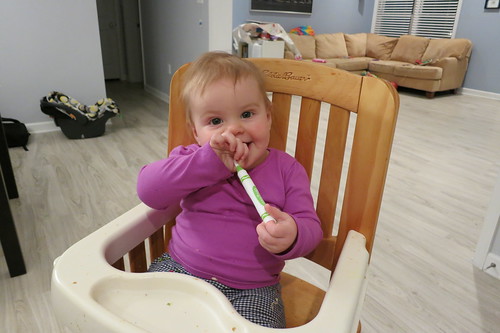 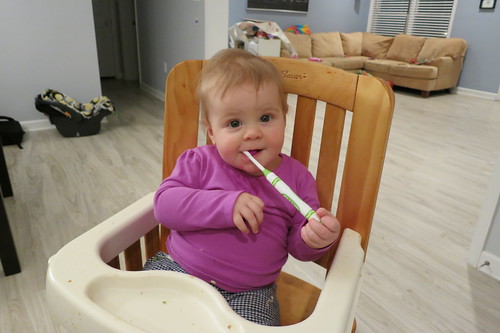 We went to another holiday party on Saturday, which was really nice since it was a neighborhood party that did not entail buckling any children into the car :) We've been in our house for a couple of years now and have really only met a handful of our neighbors, so it was really fun to get to know more of them - especially the ones with other kids around Josie's and Audra's ages ;) Audra is in the process of dropping down to one nap a day (usually 3 hours, around 11am-2pm), but had napped around 9am that day so her second nap was pretty late. The party had started at 3pm, so I sent Josie and Ryan on ahead until I finally woke Audra around 4:30pm. The party was just up the hill from us and a few doors down, so that seemed close enough that I decided to just stick Audra in the carrier and walk it. How quickly I forget 1) how out of shape I am, and 2) just how steep that hill is. I was huffing and puffing the whole way up it, which Audra found highly amusing :) She did well at the party, making her happy squishy face at people as she rode around on Ryan's shoulders. Then we all piled on the tractor and rode it back home, with Josie yelling "this is so fun!" and Audra swatting at my hair in amusement :)

We had Christmas with the local side of my family on Sunday, which was also really fun. My mom, aunt, brother, and sister-in-law all came over for presents and tea/snacks in the morning. We dressed Audra up as an elf, and she helpfully sat on presents and tried to eat everything... until she discovered that she could actually see out of the windows in the sun room, and then she spent a good part of the time banging on the window and licking her reflection. 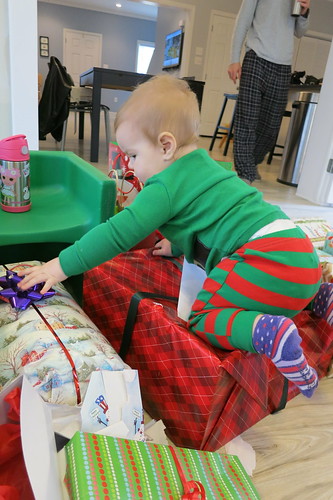 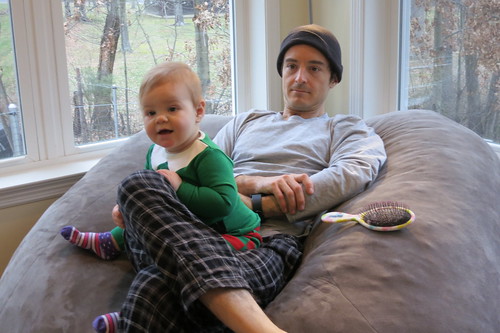 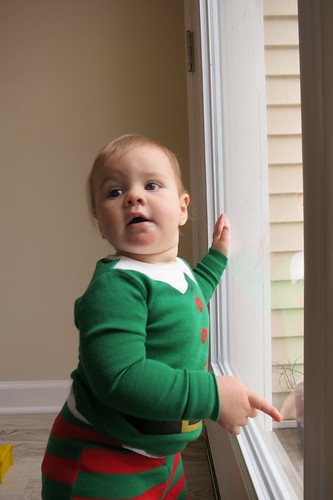 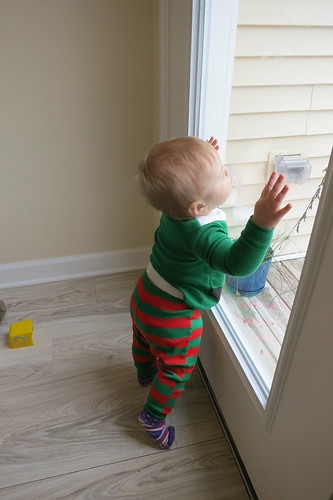 Audra had started getting a little fussy that afternoon, and then that evening she was very upset and wasn't able to get back to sleep after nursing around 10:30pm. We cycled through trying to nurse her, walk her, and just hold her for the next hour or so, before realizing that she probably had an ear infection (given the cold she had had all week, and the goop she had started having in her eyes). I gave her some Tylenol then, and she finally fell asleep in the carrier with Ryan for maybe half an hour before nursing back to sleep in bed and then having a relatively normal rest of the night. She seemed almost back to normal in the morning, but I still brought her to her pediatrician's walk-in hours anyway, just to double-check... and, sure enough, her left ear had some fluid in it but didn't look infected, but her right one definitely was infected. So now she's on amoxicillin (which she HATES now, in contrast to when she would suck it out of the syringe herself when she was last on a few months ago) and is doing much better.

She is also over 25lbs now, cut her two bottom teeth on either side of the middle teeth, and is starting to get some swelling in her gums where her molars will be coming through, perhaps sooner rather than later. Weee :)

Besides a few rough nights of sleep due to her congestion/coughing and ear infection, she had a few awesome nights last week, only waking 2-3 times some nights (with 4+ hour stretches), and falling back to sleep several times with me just patting her back.

And finally, here is what (I think) is a hilarious video of Audra figuring out exactly how to work Roomba for her purposes. Of course, now that she's figured this out, it's even harder to keep her away from what is now her FAVORITE TOY EVER, despite my attempts to explain to her that it is actually a very expensive (yay craigslist) complex bit of robotics that is the only way I'm able to keep our floors relatively clean.
Miscellaneous cuteness: 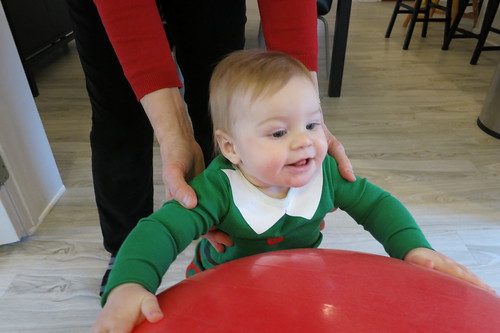 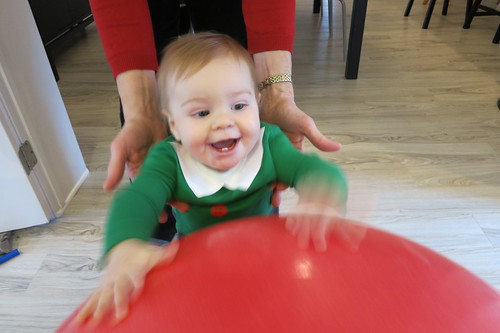 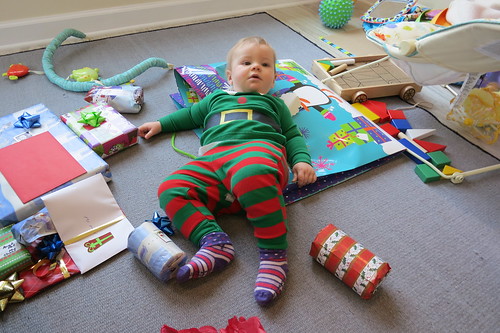 [Sometimes she just topples over and lays there like a turtle] 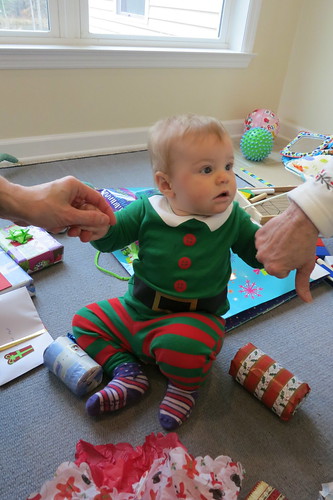