Last week was unexpectedly dramatic, as Audra came down with... something. She felt pretty warm and was acting quite sick on Thursday (making me almost too scared to fall asleep that night), although her temperature never registered much above 99 degrees (and, oddly enough, her hands and feet were freezing and blotchy). Her fever broke around 2am that night, and she seemed to be doing better on Friday, although she had a very inconsistent low grade fever throughout the day. Her temperature was completely fine on Saturday, except then we noticed what looked like a rash developing along her hairline. The rash was apparently very itchy, and she scratched up her face pretty badly and had troubles sleeping Saturday night since she was so itchy. By Sunday, the rash had spread down her face and her torso, so I took her to spend some quality time at Urgent Care that morning. The doctor seemed to think the rash looked the most like an allergic reaction to something she had come in contact with, but given the preceding fever, thought she might have roseola instead.

She slept hard that night (3-hour stretches and barely moving whenever I shifted), and we kept her home on Monday since her rash hadn't cleared up yet. She was super thrilled with Ryan in the morning, then good for me when I relieved Ryan at lunch-time (even letting me get in an hour of work over lunch!). She really does like the bathtub for some reason, so we hung out in the bathroom for quite a while before she took an almost unprecedented 3-hour nap (and I got a lovely nap in as well!). 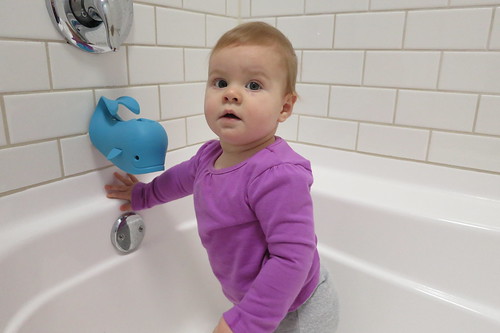 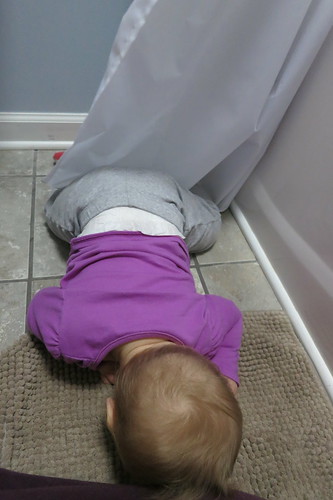 [Eating the bathroom rug... sigh]
Tuesday her rash was completely cleared up, but she had her 9-month appointment anyway, so Ryan brought her to that... where she apparently screamed the ENTIRE appointment. The doctor was unconcerned with her rash, thought she had an ear infection, and gave Audra a shot (and now she's all caught up with her vaccines again). Since Audra wasn't exactly being helpful in letting the doctor see her ears, we think she might not actually have an infection, since she just was not acting like her ears were bothering her. So we held off on giving her the antibiotic (since it messes up her system so badly), and several days later now, she still seems fine.

Audra continues to get more playful, which is awesome! She started playing peekaboo, and will cover her face with a towel, burp cloth, etc., before pulling it off with a big grin on her face. She hasn't quite figured out what part of her face she's supposed to cover though, and will sometimes just hold something up to her chin before pulling it away to wait for the resultant claps from me :) She also has started to hand us things, like one night when she handed her slipper to Ryan... who handed it to me... and I handed it back to (a delighted) Audra to repeat the cycle several more times :) She also, rather randomly, started curling her lip up and snorting like a pig when she's especially happy. Happy is good, although (and I say this with love) I was slightly disturbed by the fact that I found the opportunity to use the word "porcine" for the first time, and it was in reference to my adorable daughter ;)
In a very promising development, I've discovered we can redirect some of Audra's vocal energy to some degree. A few times when she started screaming, I answered her with some babbling, which she (thankfully) picked up and started repeating back to me. This only has worked so far when she's screaming just to make noise (not because she's upset), but at least loud babbling isn't quite as ear-piercing as screaming :) Speaking of which, we discovered one way in which the girls are exactly the same this week - their screams. Audra was trying to grab a toy Josie was holding, so Josie screamed at her - which is maybe not the most useful reaction, but they are already pretty well-matched physically, since unless Josie is willing to actually get up and leave, Audra can actually wrench things right out of her grasp. Anyway, Audra sat back, looked at Josie for a second, then very deliberately screamed back at her - at the exact same pitch. It almost didn't even sound like they were both screaming, it was so perfectly matched. I found this hilarious.
Audra continues to work on her walking, and although she has certainly gotten speedier (as long as she's holding onto someone), she only tried to take a step on her own once, and promptly fell down. She is starting to step on things though, lifting her leg up and experimenting putting her foot on other things (like toys or rungs on the kitchen stools) or in things (like her toy box). I assume this is part of the whole learning process, as she learns how to control her body better. In the meantime, she has one more method at her disposal for abusing her toys. 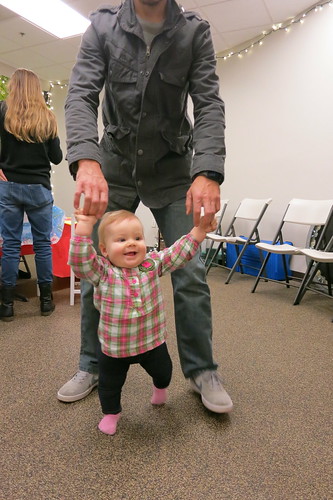 [Walking around at the birth center's holiday party]
Oh! And Audra did her first "joke" last week :) One night she didn't fall asleep right after nursing, so I laid there watching videos on my phone, waiting for her to settle down so we could try again. She joined me by laying down next to me with her head on my pillow for a while. Suddenly she sat up, and I saw her face looming over me in my peripheral vision. I didn't look at her right away, and she continued hovering there until it got awkward enough that I finally cut my eyes over to see what she was doing. As soon as she saw me look at her, she busted out laughing and then gave me a kiss (i.e., put her mouth on my nose). This was the first time she did something that she found funny, rather than just laughing at something we've done. Silly girl :) 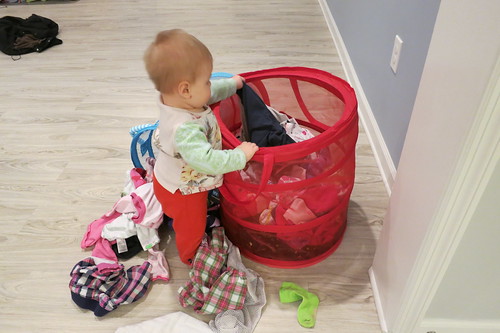 [(Not) helping me with laundry] 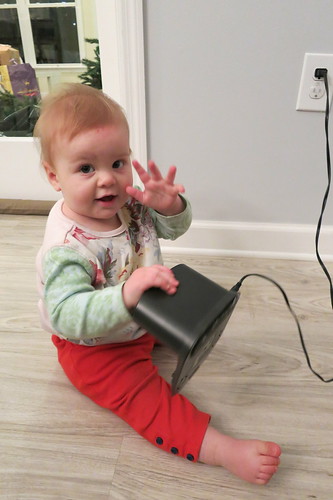