Audra has decided that her new goal in life is to be responsible for our power bill :) Now that she's gotten pretty good at turning off lights, she really just wants us to carry her around (with her finger outstretched) so she can turn off any and all lights she comes across. 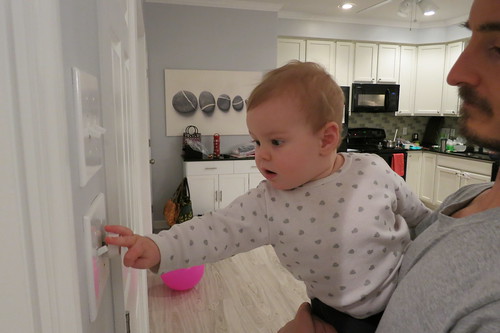 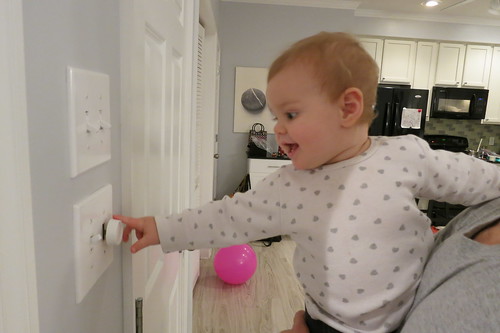 Audra has really just been so much calmer and more pleasant lately (my "Wonder Weeks" book tells me we are in another "sunny" phase, although I suspect the 3-hour naps she took both Saturday and Sunday played a big role too!), and it's so cool to see the more playful side of her personality coming through now. She really likes my phone charger, and raced to grab it one day when she woke from her nap - I grabbed her around the belly and instead of getting upset that I thwarted her (like she normally does), she just erupted into giggles before flopping over onto her back like a turtle. She is also just delighted whenever she finds an errant pacifier laying around the house, although she doesn't actually want to suck on it... oh no. Instead she likes to hold it out to Ryan before changing course and offering it to me instead. We've said the word "psych!" more times lately than probably anytime since the '80s ;)

Audra hasn't said her first word unprompted yet, but will usually mimic us if we say "baba" or "dada" (she's still not too sure about "mama"). However, when I asked her where her duckies were the other day, she looked right over to where they are and then said something that suspiciously sounded like "duck". What are these duckies? Only a Warhol-esque picture of a bunch of ducks that kind of creeps me out but that she inexplicably LOVES. It's right next to her closet, and her face just lights up whenever we go in that general direction, so we usually have to make a stop at her duckies so she can pat at them and attempt to rip the picture off the wall. 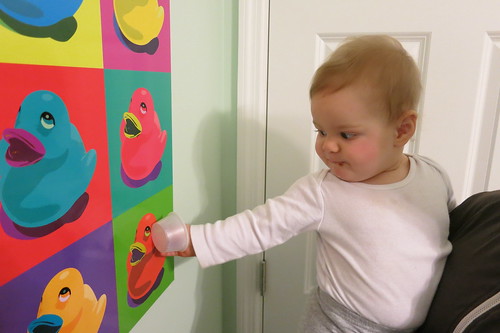 As it turns out, Audra also loves bacon (which is actually stuck to her lip in the duckies picture above), and yogurt. Ryan gave her only a tiny bit of his yogurt since we're still holding off on really introducing any foods to her directly that she doesn't tolerate me eating yet, but as soon as she had a taste, she was just about mauling Ryan to try to get more.

We went out to another holiday party last weekend, which she did really well at. She only fussed a little bit in the car on the way there and back (despite it being about a 20 minute drive in the afternoon/evening), and was quite entertained with all the commotion and people watching that she could do at the party. And while she just about got whiplash frantically looking back and forth at everything/everyone when we first got there, she felt comfortable enough (or overwhelmed enough?) to let other people hold her too. She normally is pretty shy at first - even around family - but she was doing so well that she was able to be passed around a bit :) 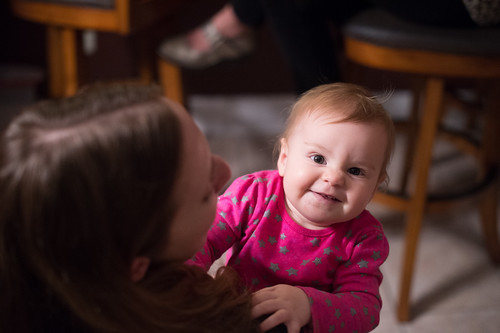 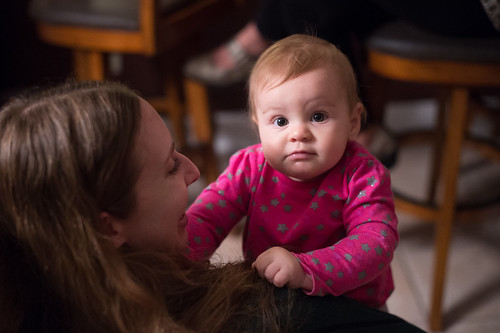 In kind of a related vein, Audra has been doing really well with going to bed later the last few nights. This is just a temporary situation, but so that I can work on Christmas-related stuff, we've been going upstairs to the guest room (i.e., baby play room, since it's the only carpeted room with a door in the house) after dinner each night until she gets fussy, so she's been going to bed around an hour later from normal. She also seems more sensitive now with how we interact with her - if I say "ow" a little too excitedly or "no" a little too sharply, her lower lip immediately drops and the tears start.

Her sleep continued to be going well enough, although I think we're heading into another rough phase as she's about to cut a lower tooth and she's coming down with a cold. But until then, I've been enjoying 4-hr stretches of sleep :) Lately she's been trying to nurse while laying on her belly, which doesn't work all that well, but if it does and she's able to fall asleep on her belly, she tends to sleep a little better/longer than on her back. I've also finally admitted to myself that I do actually like sleeping with her - I like having her close by me and to be able to easily comfort her and support her at night... although I also have to say that feeling goes away kind of quickly when she has a rough night ;) But if I really wanted to change the situation, I would certainly be trying harder than I am right now - but despite any complaints I have about bed-sharing, I am still making the choice to do it, and I do still think it's the right decision for her (and me) right now. As I've been saying, we'll revisit this at 12 months (although I've started to push this off to 18 months lately... we'll see).

The nights seem to break into three main categories now: a good night (where she sleeps longer stretches and is able to get back to sleep on her own at least once), a bad night (where she wakes a million times, needs help getting back to sleep each time, and/or wants to nurse the whole night), and a "just chuggin' along" night (where she has a decently long stretch of sleep but wakes about every 2 hours besides that, and needs help getting back to sleep almost every time she wakes). I actually prefer the "just chuggin' along" nights - which happen the most frequently anyway - since good nights make me get my hopes up too much the next night that I'll get more sleep again (and it's harder to go back to a "normal" amount of night wakings after a good night), while it's probably fairly obvious why I don't prefer bad nights ;) 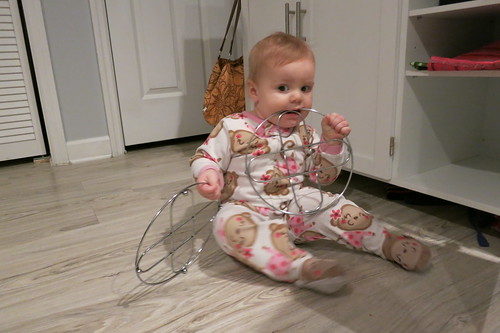 [Doubling the use of our trivets for the year ;)] 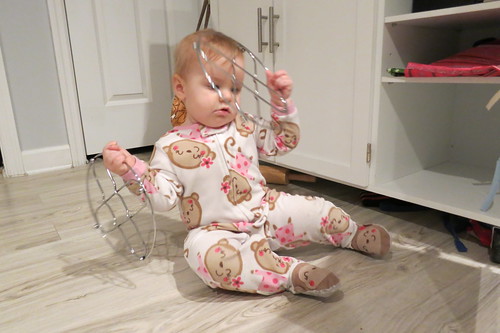