Audra may be developing at a perfectly normal pace, but to me, it seems like she is just barrelling through things astonishingly quickly now.

This week, the switch seems to have flipped with her walking, and she no longer seems to be stuck at a max of five steps per attempt. So now she has walked across the room, walked to us, walked to... nobody, really - we just turn around to see her wandering around sometimes. She seems to be showing off by walking while carrying things, stopping to squat down or pick something up and then continuing on or just standing there for an impressive amount of time. It's not like she's walking laps yet, but she is definitely getting more confident and interested in walking.

On the flipside, she is also doing her knee walking more. I still don't get this! It's so slow compared to her speedy crawling, but it is cute how she integrates it into her mobility now. She usually crawls up to her target, stops a few feet away, then goes up to her knees to grunt and swing her arms around as she knee-walks the last few feet. Very cute, and also not very stealthy, which is a positive attribute right now. She used to only want to stay close to us, but now that she is starting to venture off on her own we've had a few instances of "suspicious silence", which usually means she's in the bathroom, climbing on stools or unrolling toilet paper ;) Or, apparently, doing pull-ups - she actually pulled herself off the ground the other night, with just a fingertip-hold on the counter. She is now officially stronger than I am.
Audra has gotten a bit sassier too, and her cries are definitely differentiating themselves now. She no longer just uses her super-upset, ear-piercing, soul-crushing cry for everything (although that certainly still makes its appearance frequently enough), but now has her "you put me down and now my feelings are super hurt" sad cry, and her "I'm not pleased with this development - fix it, woman!" cry that is usually accompanied by her slapping at me (see video above). She has even thrown herself (carefully) on the ground and cried when I set her down, kicking her feet and generally having a little baby tantrum. And as annoying as this will probably be soon enough, in the meantime, I'm pretty pleased with her ability to express her emotions so much more clearly now and with how much better we're able to communicate - tantrums and all :)

Audra is showing much more interest in language now too. She'll mimic us more when we ask her to try to say different sounds, and has started making more sounds on her own :) She hissed at me when we were playing with a snake puppet, said "baa" and attempted a "moo" as we were looking at a picture book - but her "moo" is really just her blowing a little bit of air through her lips. It doesn't really sound like mooing, but it is adorable :) My favorite, though, is that she now says "uh-oh". I'm pretty much dropping things on purpose now (or so I can say!) just to get her to say it ;)

Perhaps in a related development, Audra is much more into her books now too. She already has a few favorites that make her break out in a smile as we flip through the pages, and she likes to bring me books to read to her now. Other things that make her happy are being held upside-down, as she will crawl up to us and then duck her head to headbutt us until we flip her over and bounce her around. She likes to brush her hair with Josie's brush, and has tried to brush our hair too :) She's now trying to figure out the mailbox shape sorter, and somehow is able to recognize phones even when they look nothing alike (e.g., a cordless phone vs a flip phone). Again, we almost never talk on our phones at home, so it's especially funny to see that she apparently knows all about talking on phones, and will insist that I hold the phone up to my ear to talk into it too :) 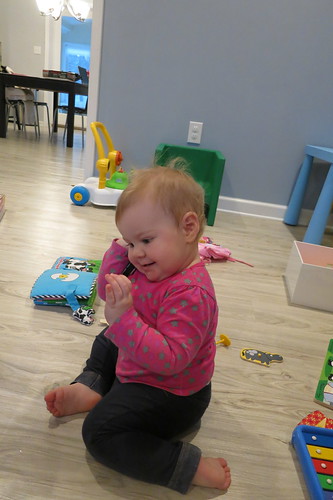 [Hello? Ok, buh-bye]
I have also had to pull her off the kids' table now, as she's climbed up onto it using one of the chairs. She watches for her opportunities, though - we left the gate open once for the stairs and she immediately made a break for it, crawling super fast and then giggling when I caught her :) She is doing more investigative play with putting things in other things, which is just fascinating to watch. One night she tried to put a spoon handle through a circle but couldn't quite get it then - and yet, the next night she had it mastered. She also likes to put different things into her stacking cups and then fling them around until everything falls out again. And she also likes to clap now :) 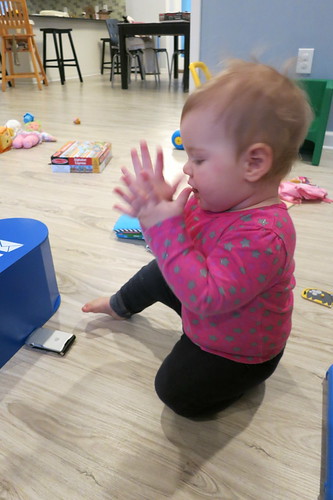 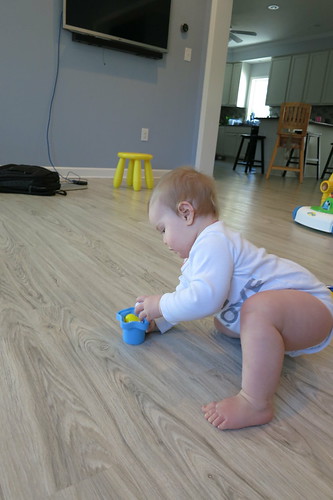 
[Throwing things out of cups]


We appear to have found another favorite food for her, as she cried when she finished her blueberries the other night. She also really likes clementines, as she kept yelling for more and ate nearly a whole one herself. She hasn't been as excited about meat lately, although she did seem to really like a piece of beef that she happily gnawed on for most of dinner (and actually ate quite a bit of).
[Lip-smackin' good] 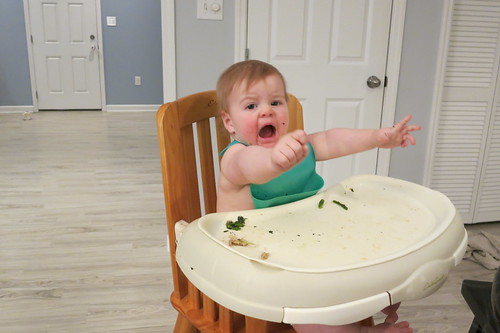 Audra is currently sick again too, although she's not really acting like it, except for all the congestion and coughing. She sounded a little croupy at night earlier in the week (and Josie too), so we all stayed home together on Tuesday. Her sleep hasn't really gotten worse, despite her being sick - she has had some problems at the beginning of the night since she keeps coughing just after she falls asleep, which then wakes her up again, but beyond that she's still waking her normal of every 1-3 hours. She also has been trying to sleep on me more, which I could care about (since it is sort of the opposite of "learning to sleep on her own"), except I don't. :) Well, maybe I do care a little, since I actually really like it - I'm happy to be able to sleep on my back, and I get to cuddle with Audra in whatever strange position she settles on (usually on her stomach somehow still nestled on my shoulder, but sometimes leaning back against my legs with her arms splayed out). We've had to wake her in the morning a few times lately to get her ready for daycare, which I've learned it's always safest to bring Josie in with me for, since Audra is usually so happy to see Josie that she's not too upset that we woke her... even when Josie likes to show her affection for Audra in funny ways. 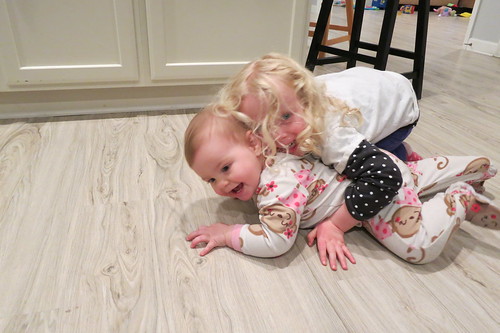 [Prompting yet another request that she not squish her sister]

I'm still taking Fenugreek every day in attempts to get my supply back up, and it's still sort of hit-or-miss - most days I'm still a few ounces short of what I need to send to daycare the next day, but I did actually pump enough during the day for the first time since I got sick a few weeks ago. I guess one good thing about having to dip into the freezer stash is it has reminded me that I need to use up some of the older milk, since I had some in there from May (which is a little outside the recommended storage time). So I've been using thawed milk for one bottle a day now until my stash is more current, and freezing whatever is left over after I fill the other three bottles. Nursing is going well too - Audra has been increasingly more acrobatic (and playful) while nursing, which is totally fine (and entertaining) now that she has figured out how to do it without biting me. Her morning nursing before she goes off to daycare and her first one when we reunite in the evenings seem to be particular favorites, since she tends to nurse for a bit, fling herself away to coo at the ceiling or kick in delight, and then will look at me with a big grin on her face before doing it all over again. 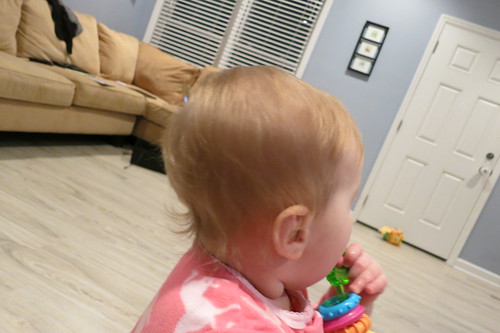 [Her hair is starting to curl!] 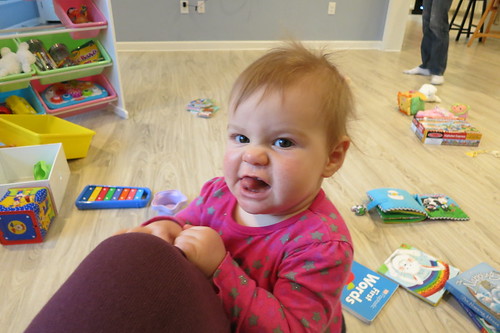 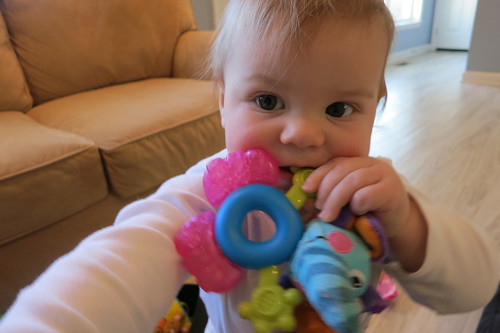 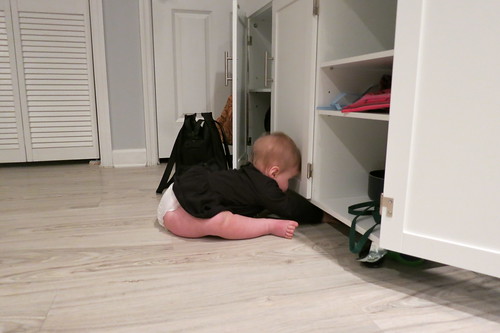 [Bendy baby]
[Clapping blocks together, and a little hesitant about me building the tower on her glockenspiel]
[I'm really not sure what she was doing here]
at 3:35 PM