Last month was dominated by Christmas for Miss Josie :) She had been very excited about Christmas trees and Christmas lights for probably weeks before we put up any ourselves, and kept asking to see the "really, really, really heavy tree" (my explanation for why it was still in the attic instead of set up!). And then when I finally did start setting up the tree, she helped me with ornaments, hanging several herself on the lower branches, and directing where I should hang some on the higher branches (although I did override her a few times, once the concentration of balls in one area got to be a bit much!).

We went to a few holiday parties in December, one at the birth center, one at the house of a coworker of Ryan's, and one in our neighborhood. Josie had a lot of fun at each one, especially when there was a separate "kids area" set up, and even more so if there were stickers at said kids area :) And yet I don't have any pictures of her at any of the parties, except for this one of her with a vintage VHS tape ;) 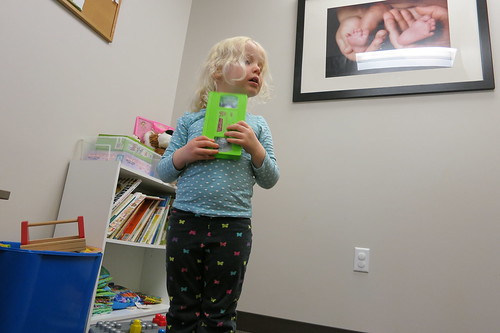 Josie's school did some holiday-related activities too, so Josie was very excited for pajama day (when she got to wear her elf pajamas to school!) and to see Santa. She told him she'd like candy canes and a toy frog for Audra for Christmas, which was pretty consistent with what she had apparently told her teachers she wanted too :) 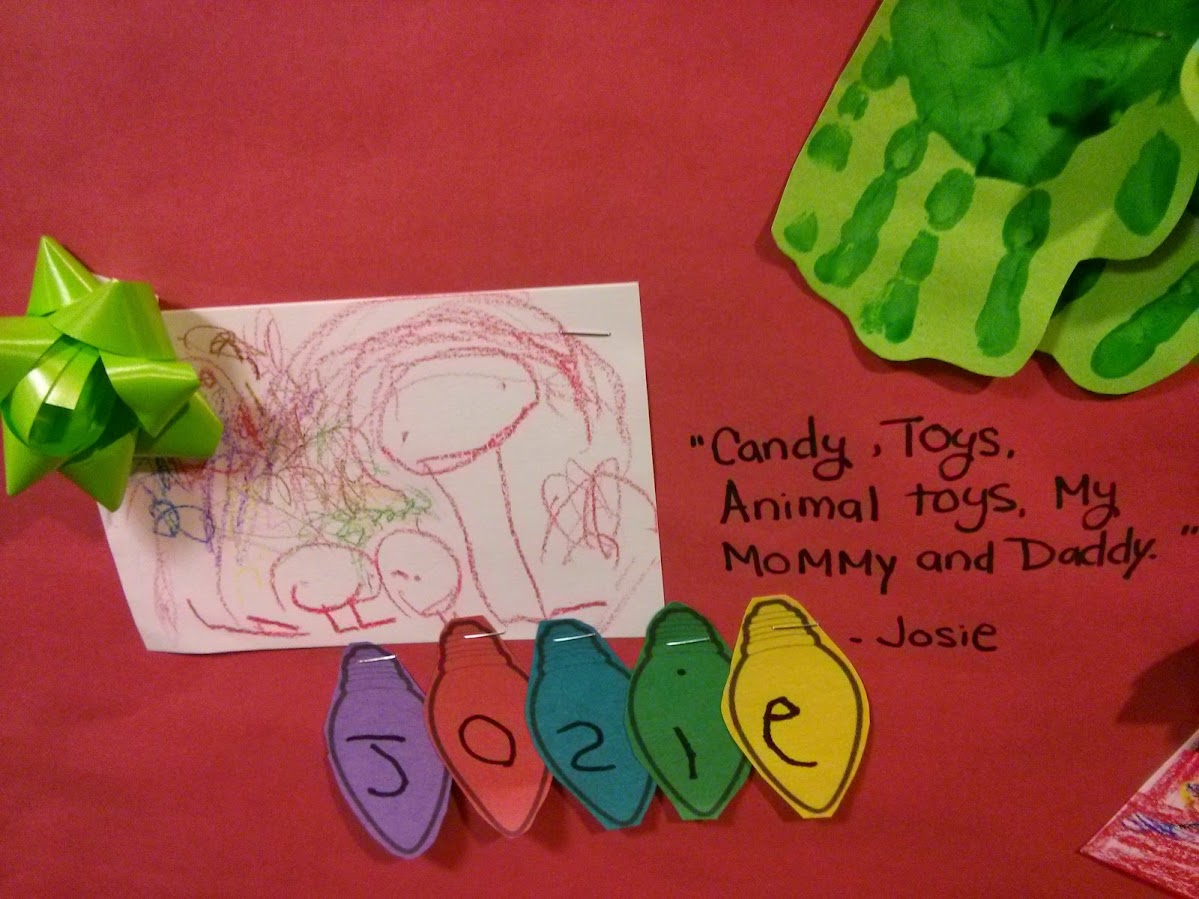 There was also a holiday program where the kids sang a few different songs, which was as adorable (and a little chaotic) as might be expected with a room full of preschoolers :) Josie had been regaling us with "The Driedel Song" all week, so it was fun to see the final performance :) The kids had also made ornaments, which I loved, although one of them didn't make it through the week... 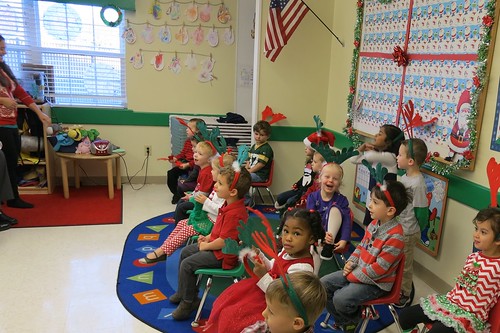 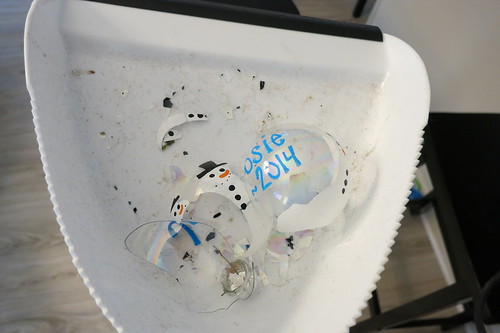 For Christmas itself, Josie was very excited about seeing all the presents under the tree in the morning. We hadn't played that part up too much since otherwise she would have been so excited that she wouldn't have been able to sleep (which I realize is part of the fun of Christmas, but maybe next year I'll feel more up to an early morning, when I hopefully won't be waking up every couple of hours all night still). We also decided against doing the whole Santa thing at home, and so she happily told everyone "nope!" when asked if Santa was coming to her house. We haven't really settled on our approach to explain why Santa would be going to some kids' houses but not hers, but it seemed to go well enough for this year, at least. She had a lot of fun opening all of the presents, and favorites include her umbrella and watch - basically, anything that is like "grown-up" stuff :) 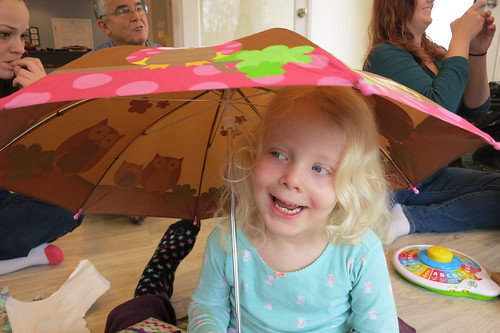 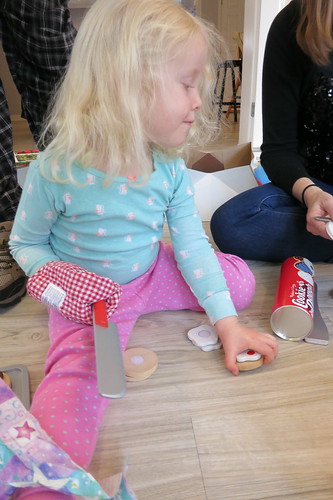 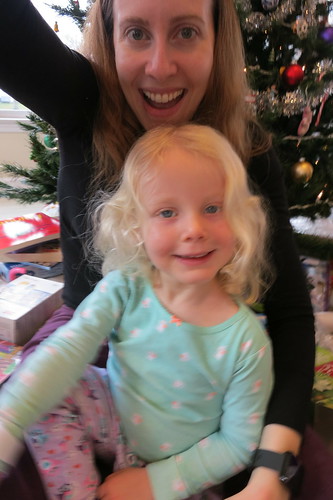 In non-Christmas-related news, Josie's imagination continues to be very fun to watch develop. She holed herself up in the guest room closet (otherwise known as where we store all the toys as we rotate them out), making "pumpkin pies" for a remarkably long time. She also has a couple of toy fish that live in the shower, and she was pretending that her fish were going to go to Ryan's work, then had me put them on the shelf "at work". A favorite game is still when she pretends that she's the baby kitty cat and I'm the mommy kitty cat (or vice versa), which is sometimes a blessing in disguise, since she'll cooperate very readily without whatever I ask her to do as long as I call her "baby kitty cat" or "meow" at her, as appropriate (but if I'm not designated as a kitty cat at that moment in time, I am not at all allowed to meow at her. This is one of the main rules of the game, apparently.).

Her drawings are still such a fun way to get a glimpse into how her mind works. For example, she drew a picture of me with an enoooormous belly (and a happy smile!), and it was apparently when both Josie and Audra were in my belly - this, despite many conversations where I've tried to dissuade her from this idea, she is still convinced that they shared space in my belly :) And impressive as that was, she then went ahead and wrote "Mommy" at the top of the page all on her own, then flipped the paper over to draw a picture of Ryan asleep in bed (but then got stuck trying to write "Daddy" on her own). She appears to have come across Captain Hook somewhere along the way, since many of her pictures now feature him and/or his hair, since most of the people now have a veritable mountain of curly hair atop their heads.

Josie is starting to offer up her own ideas and suggestions, and is no longer just automatically saying "yes" if we ask her if she understands or if she knows something (when she would just have to admit that she didn't actually know when pressed further). I think her ideas are fantastic, though, like when she told me she wanted a watch without a "9" on it so that it would never be her bedtime (clever girl!). She also recognizes other people's good ideas, like when she asked for a candy cane from the bowl at the front desk at school, and when I told her she could have one that afternoon instead, she congratulated me on my good idea and gave me a high five :)

Ryan's big project for last month was to build his mini-ramp for skateboarding. Josie is pretty interested in learning to ride a skateboard, but appears to share my aversion to sports that heavily feature falling down and getting hurt, so we'll see how this works out ;) Until then, Josie has had a lot of fun running up and down the sides of the ramp, and sliding down the sides or her slide. 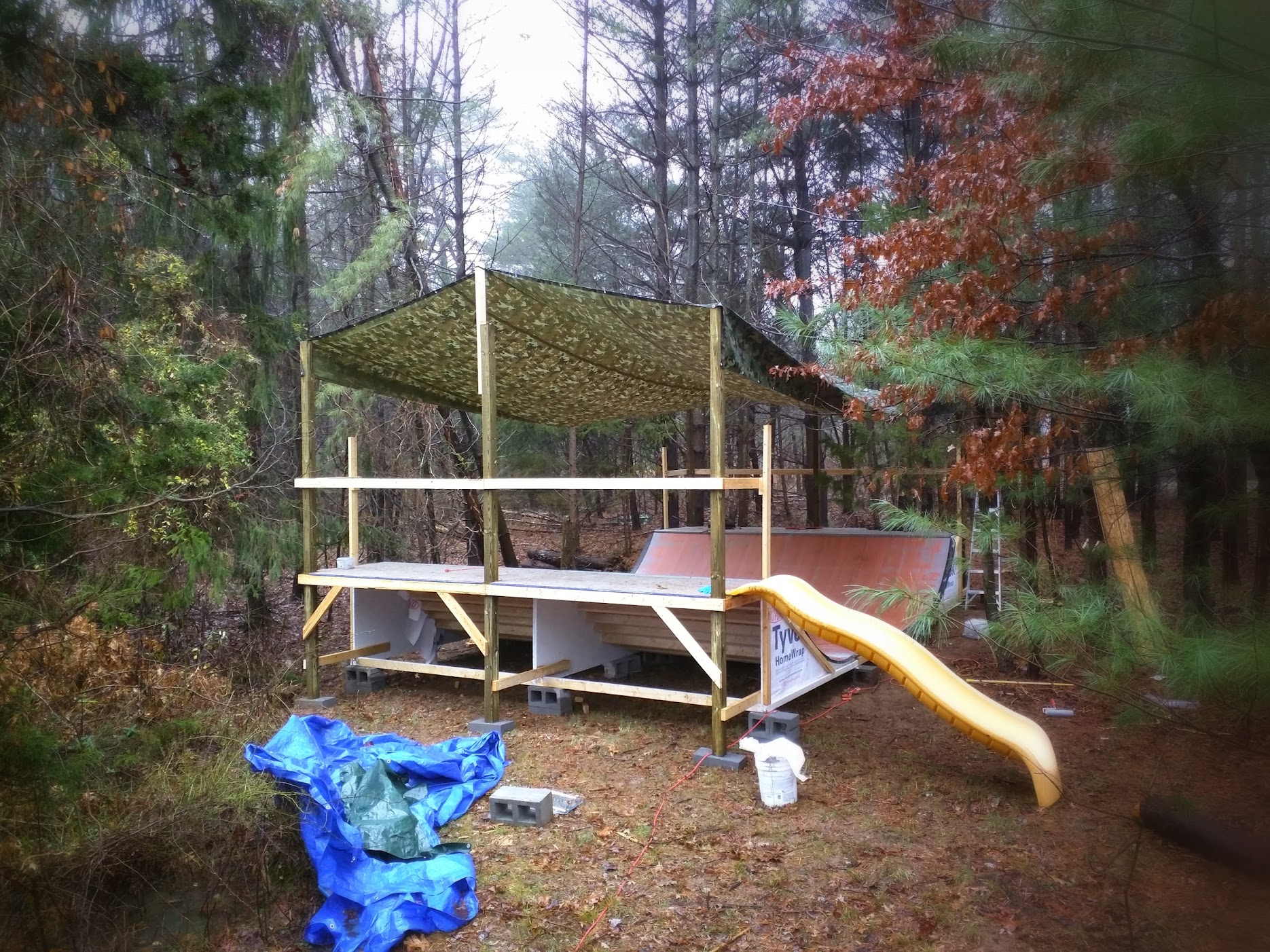 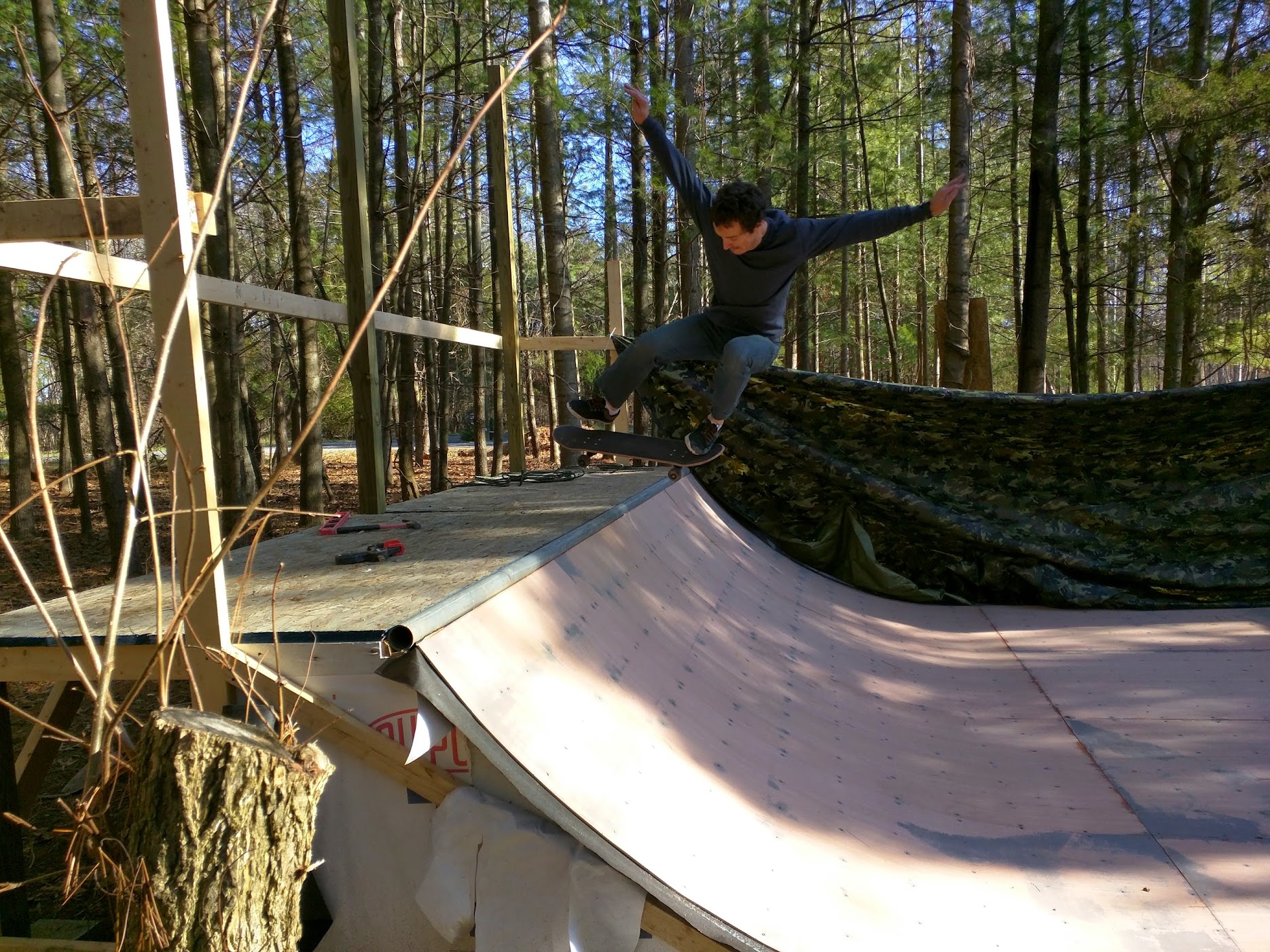 Josie has been especially fascinated with restaurants and kitchens lately, and was especially excited when we got to take a quick detour through the kitchen at a restaurant last month. She likes to pretend to order our food from the "cookers" at Chick-Fil-A, before getting back on the quiet train back to the fire station... naturally. At least it wasn't a boat back to the hospital like it usually is ;) We took her to a hibachi place for lunch since she had a half day on New Year's Eve, which was the best thing ever, as far as she was concerned. That was a really fun meal since she was enthralled with having her food cooked right in front of her, and she insisted on sitting on my lap (where she decided had the best view of the food being made) and asked questions about everything the "cooker" was doing, and was more interested in watching than eating too much of her food.

She has been really fun to take out lately, and it turns out she can be absolutely delightful company while out running errands. She has had more days when she's in a really good mood, which is obviously fun on its own, but sometimes she even had a day of NO CRYING. They are still few and far between, so it's still a shock to realize that it's the end of the day and there haven't been any emotional meltdowns :) I took her with me shopping a few times, and she was wonderful - listened well, had fun, helped me pick out presents for Audra, and was very patient when we ended up standing around waiting for our food for close to half an hour one night. She also had a blast at the post office and Target, although she can also be a little harder in some ways to take out now, since she wants to look at/touch everything and talk about everything in detail. Ryan takes her to movie night at the grocery store sometimes, which she also usually really likes... although she did say she didn't want to watch the movie "with the green boy" (which was Jim Carrey in "The Grinch"). :)

Josie seems to really be enjoying playing with Audra now, within Audra's capabilities - she still tries to get her to do stuff ("Audra, come over here!"), but she seems to understand more why Audra usually doesn't do it, and usually just seems to like having her around. Josie normally likes to keep a pretty big bubble of personal space around her, and so it can get a bit dicey when Audra decides she really would like to pat Josie/grab her hair/sit on her, but the other day Josie whined a little but ultimately did fine with Audra's feet resting on her, and then Audra climbing in Josie's lap and bouncing with excitement. And in turn, Josie is starting to give her more hugs and kisses (whether or not Audra actually wants them). ;)

Josie especially likes it when she can help do the "grown-up" stuff with Audra, like grabbing Audra's medicine out of the fridge for us and drawing it into the syringe (with help), or giving Audra her breakfast yogurt - Josie actually used the spoon and scraped the bowl on her own (usually a rarity!), and kept telling Audra she was doing a great job and was a good baby. The girls also took their first ever bath together, which they both loved. Josie shared her bath letters with Audra (with even more enthusiasm once she realized she could stick letters to Audra too, so Audra was wearing an "A" on her chest for a good part of the bath), and then told me not to take Audra out at the end since she wanted to keep playing with her. We also were able to bring Audra with us once when we went to pick Josie up from school, and it was just adorable how excited they both were - Josie squealed and practically climbed into the car seat to kiss her hello, and Audra's feet were just kicking and whirling in delight :) 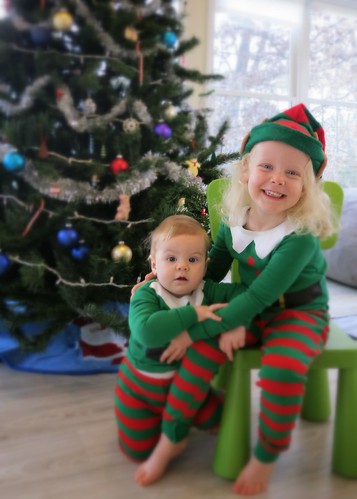 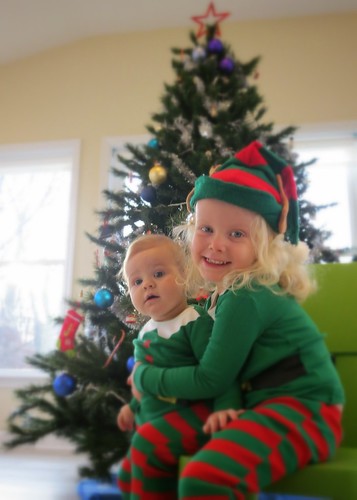 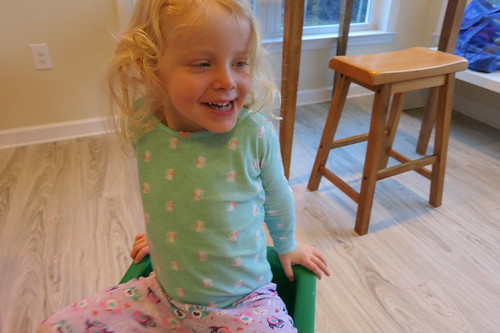