Last month, Josie had a few new firsts. I brought her to the dentist with me for the first time, and while we had talked about what would happen at the dentist, we were just going to play it by ear to see if she would have her teeth cleaned too... and apparently watching me go first helped her feel comfortable enough to hop right up on the chair and do a fantastic job while they did a full cleaning for her, complete with flossing :) She was almost unbearably sweet that day though - even before my heart hurt to see her in that big chair, sitting perfectly still and trying so hard to hold her head just right, as she was quietly observing me getting my teeth cleaned, she would whisper, "I love you, Mommy" and reach out her hand to me whenever I would look over at her. My sweet girl :) 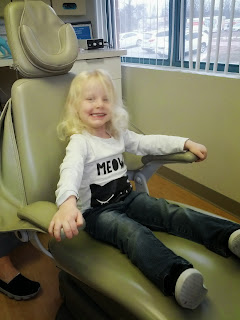 We also signed her up for ballet at school... we had waffled long enough to miss the deadline to sign her up for the first session in the fall, and after learning that just about every other girl in her class went to it (and seeing how often "ballet class" was factoring into her play), we made sure to sign her up for the winter session. She seems to be liking it so far, but is quite reticent when it comes to the details - so far we know that she got a sticker once and they did "tippie-toes", but that's about it.

Probably the biggest change last month was that Josie moved up to Pre-K at school. She was recommended to move up with a few of the other kids from Preschool, and while I was a little apprehensive since she was on the younger side for Preschool anyway, let alone for Pre-K, they assured us that she was definitely ready for it academically. I'm honestly still not sure it was the right decision, or if we should have pushed back and had her transition in a few more months instead, but I've been talking with her teachers throughout and watching her pretty closely, and she seems to be doing really well. While our first visit to the Pre-K class wasn't very promising (she stuck right by me and wouldn't say a word, only saying "I'm so scared of Pre-K!" after we left), the transition itself was actually pretty smooth and she has been really positive about the new class. Really, the hardest part right now is that she is no longer in class with most of her friends, and she's actually to an age now where that matters. She is making new friends in Pre-K, though, and hopefully more of her Preschool friends will move up soon enough too.

And actually, her transition to Pre-K went even better than it should have, since her first week there she appeared to be dealing with a minor ear infection too. She started complaining that her ear hurt on Thursday or Friday, and since we really try to avoid antibiotics unless absolutely necessary, after doing more research and reviewing the AAP's revised guidelines regarding treatment of ear infections, our plan was to observe her over the weekend and bring her in on Monday if she wasn't showing improvement. Even knowing that the vast majority of ear infections clear on their own within a few days, it was still hard for me to hold to this plan, though. It seemed to be a pretty mild infection, since she had a lowgrade fever and complained that her ear hurt, but she was still sleeping pretty well and never got to the level of pain that she normally seems to have for ear infections. So Friday night we tried various natural remedies to ease the pain/infection, which led to Josie laying on the couch with onion juice in her infected ear and a warm onion on top, and then warmed garlic mullein oil in her ear a few times that day and the rest of the weekend too. Saturday morning, her fever went up and she complained that both ears hurt, so I started getting more worried.... then after she woke up from her nap that afternoon, she was fine. Her appetite was still a little off, but no fever and no pain in her ear.... and no lasting effects from a round of antibiotics :) 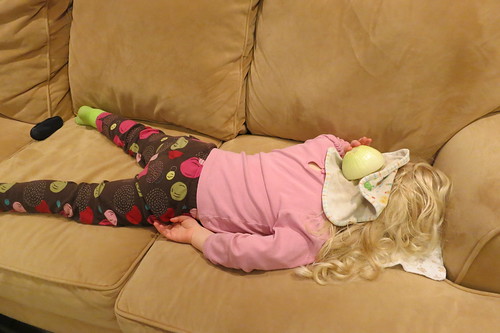 In other news, we changed up the toy situation at our house again, and replaced some of the shelving/closed bins we had in the living room with open bins so that more of the toys would hopefully be visible and therefore played with. We also pared down the toys yet again so that the number of options wouldn't be overwhelming, and added them to the toys stored away upstairs, which also seems to help with interest in them - the kids basically get "new" toys every few months when we rotate them, and something that was maybe beyond their skill level/interest before is now much more fun. 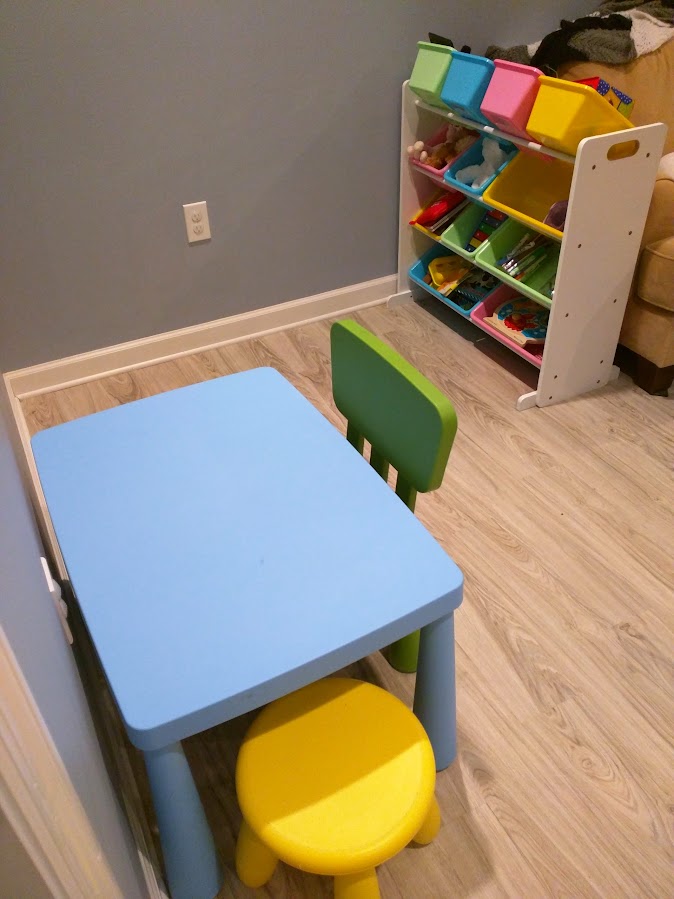 So far, this seems to be working very well, and Josie has played with a lot of the toys she didn't really touch before. She also rediscovered toys she already seemed to have forgotten about from Christmas, and was excited about them all anew :) She dressed up as a doctor several times, insisting on checking our vitals and plastering us with (luckily imaginary) band-aids all over, and had a ton of fun playing with Audra's fish pool... which was alternately a hat (to be sneezed off of our heads), or a birthday cake (for us to blow out the candles on before pretending to eat it). Even non-toys have been entertaining to her, as she was fascinated with a new scarf I had bought myself and wanted nothing more than to lay underneath it the rest of the night. 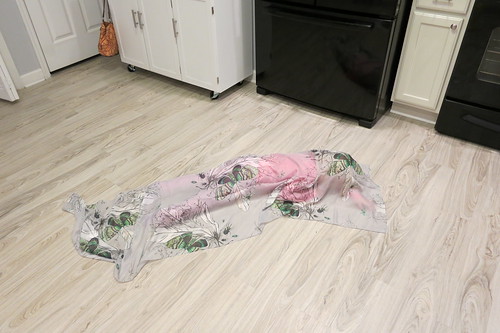 Audra's glockenspiel has also gotten some good usage, with Audra continuing to whack away at it, Josie making up songs on it, and Ryan actually playing it. He has been able to play along to various songs now, so a favorite pastime has been to put some Lumineers on the tv, and then Ryan will play along with the music while Josie and/or I sing, and Audra dances ;)

And after that heartwarming visual, I will bring it all down by saying that Josie has been making up songs more lately, sometimes wholly made up and sometimes existing songs just with changed words. One example of the latter was her singing "Dreidel, dreidel, dreidel, I made you out of POOP!" I think the responsible thing to do in response would have been to ask her not to use potty words, but we were laughing too hard so she got a pass this time ;)

Josie has been doing much better with using her words, so she'll say she "needs more time" when she's in a new environment rather than just get all upset when someone encroaches on her personal space before she's had a chance to warm up. Her harshest rebukes are currently "I'm not going to be your friend", "You're not being respectful", and "I'm so mad". I am apparently developing the "Mom voice" too, since one morning Josie told me I was annoying (in her defense, that was true), but quickly changed it to "silly" when I said "Excuse me?" and asked her to repeat herself ;)  But as she gets more comfortable with expressing her opinions and thoughts, we also get funny little Josie-isms like her telling Ryan "It's ok, Daddy, you can go to sleep in your bed now" after he fell asleep in her bed. Or explaining to me (and getting quite upset about it) how Ryan had thrown out her chocolate coin, that that's not nice that he threw away her chocolate, it wasn't his, and now she's very sad and she's going to tell her daddy that. She also had helpful words of advice for me when I accidentally slammed my head into the doorframe trying to buckle her into her car seat, as she suggested I put my head through the door hole instead (thanks, kid).

[The gravel road was making her so serious!]

She is starting to order her own food at restaurants, and has even made happy plates (i.e., she ate everything on her plate) a couple of times lately, which she hadn't been doing for a while. She does seem to be more inclined to eat well when she has some personal investment in it (like ordering it herself, or helping to make it), and since she usually likes to help whenever we let her, she has been helping out in the kitchen more lately - making breakfasts, cracking eggs, putting things away. We also kept her home one day last month since she had a night of croupy coughing, and seeing her playing at being a "baker" motivated me to actually bake something with her, so we made ginger snaps together. She did a good job helping me and seemed to have a lot of fun :) 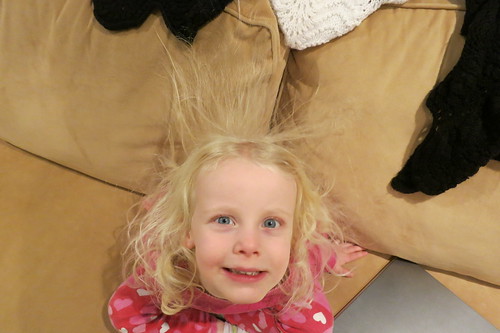 [Sick day = building up some static electricity courtesy of our couch] 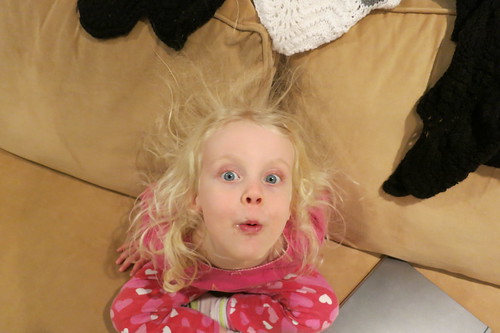 Josie has been keeping Audra at arm's length a bit more lately.... perhaps because Audra still loves to pull Josie's hair, and they are also more evenly-matched opponents now when they squabble over toys . But there have been moments of sweetness between them, as Audra is still thrilled by Josie's mere presence, and Josie still loves to give Audra food or help her with her sippy cup, and she randomly whispered "you're so sweet" to Audra while stroking her face :) 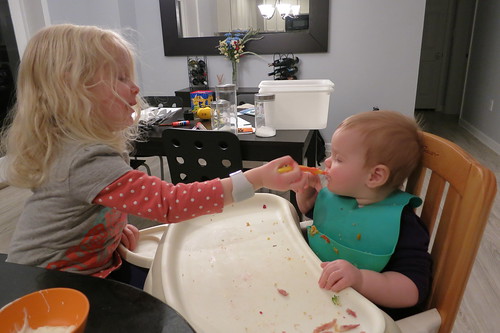 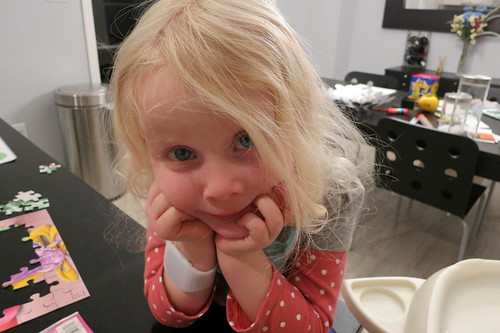 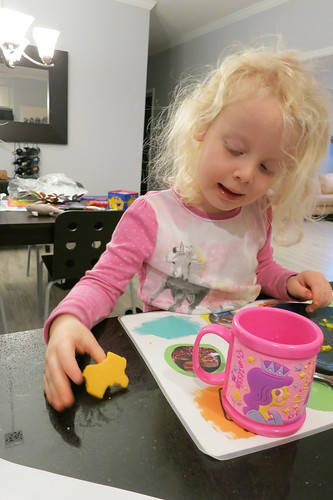 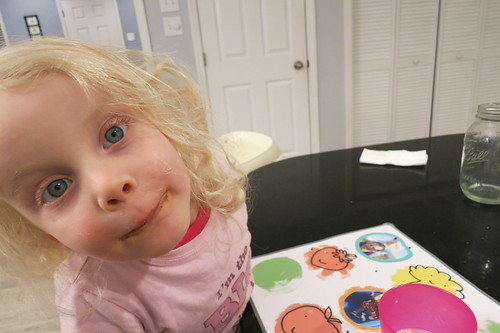 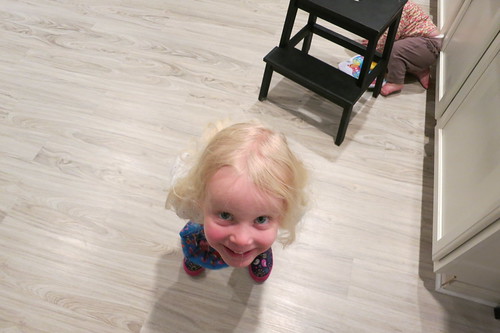