Last week had some cool developmental changes for Audra. Just as I was thinking I should give up on doing any signs with her (I'm not consistent with it, and while she seemed to recognize the sign for "milk" at least, she had never attempted to make it herself after all these months), she suddenly did the sign for "milk"! ...and then she continued to sign "milk" for everything that wasn't milk too, but that's ok ;) She also held up her finger to "shush" us after Josie and I had been shushing each other, and she loves to wave. She recognizes now that coats are usually involved with us saying good-bye to each other, so she starts waving whenever we start getting coats on... even waving to no one once when we all headed out the door together :)

Audra is getting more interested in having us name things for her, and will repeatedly point to the pictures on the wall around her change table for us to say what they are. She especially likes the fish pictures, perhaps because after I say "fish" for each one, I'll make fish lips and kiss her on the nose ;) But she is trying to say "fish" herself now too, and can at least make the "ish" sound.

We did all right in the evenings together, one night with her walking around eating an apple for most of the time I was doing evening chores. While I wasn't super thrilled about the bits of apple she was dropping all over the house, it did keep her happy and then it was funny to see her keep trying to fit the apple in her shoe... especially when she actually ate down the apple enough that it did fit ;) 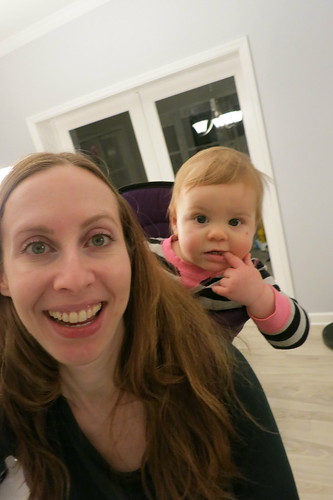 She is definitely interested in books, but apparently only in small quantities each so far. She'll bring me book after book to look at with her, and she'll gasp with delight as we look at the first page or two... and then she'll grab it away from me and toddle off to pick a different book for us instead. She also had fun putting her sock monkey in and out of one of my boots for a good while one night, and was also vastly entertained when I laid down on the floor to (pretend) cry when she started crying one night when I dared set her down for a moment. She immediately stopped crying and came over to pat me on the head (so sweet!)... before climbing on my back and bouncing around a ridiculous amount, making me laugh so hard it hurt.

We went to a couple more birthday parties last weekend for Josie's school friends. The first one was at an indoor playground with a separate toddler area too, which I thought Audra would be stoked about, but she was strangely subdued. I wonder if she was just overwhelmed with all the sights and sounds there, because she seemed happy enough, but just wasn't as enthusiastic as I was expecting. But nevertheless, she was entertained enough while we were there. She got to the second party late due to a late nap, but had more fun with that one, which had a bunch of inflatables that she was able to bounce on and climb all over :) 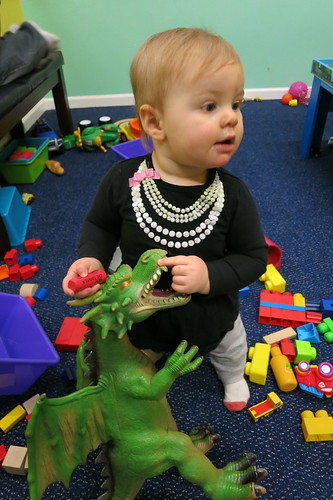 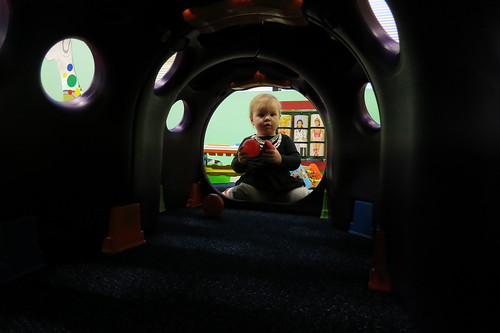 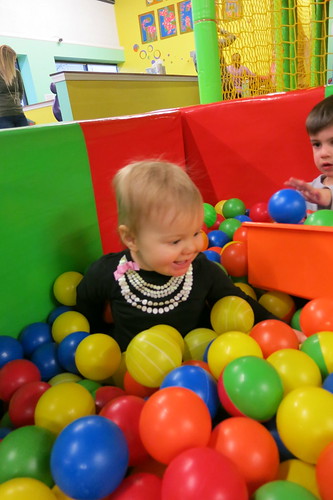 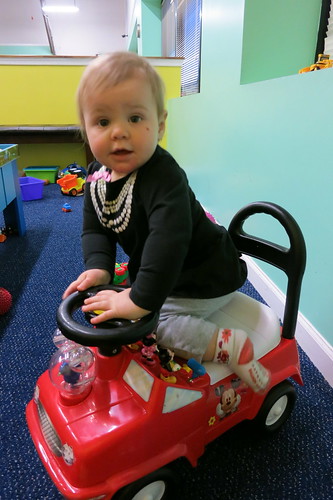 Audra has still been screaming a lot whenever I put her down, and won't readily accept Ryan as a substitute, usually crying for maybe 10 minutes or so before deciding that he'll do and then start playing happily again. She really just likes me to stay on the floor with her to serve as her home base. She now will sit quietly on my lap (sometimes even laying her head against me, which always makes me melt), or will come hug me for a quick cuddle before venturing off on her own again. She also recognizes when she's doing something she shouldn't, like the way she watches me as she very carefully bites me, or when she immediately calls out whenever she's able to secure the one remote we don't want her to play with. Her favorite toys seem to be non-toys: a pot and spoon, trivets, a tape measure, RCA cables, a rolling pin. She does like her actual toys well enough too, but these are the things she tends to come back to more often - silly girl :) She also likes to dump all of the toys/non-toys out of the bin and put that on her head instead ;) 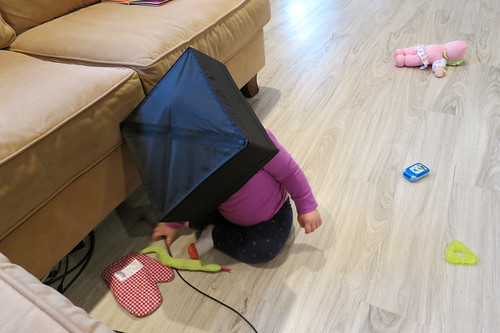 Sleep was still a bit rough towards the beginning of the week, since she was still waking frequently and sometimes having trouble getting back to sleep because of her coughing. Once the coughing finally went away, she still woke more than I remember her waking before this latest illness (but maybe it's exactly the same, who knows), but at least had one or two multiple hour stretches most nights. And on one notable night, she did multiple 2-hour stretches, fell back asleep on her own a few times without nursing, woke up as I got up at 6:10am and cried a lot on Ryan's chest for 10 minutes as I went to get ready for work, and then fell back asleep and was out for the count (even after Ryan moved her so he could get up too) until 8am.

We also had a snow day last week, and so we all stayed home on Tuesday. We spent most of the day inside since it was just so cold outside, and the girls had lots of fun playing rather rambunctiously. We eventually went outside too, with Audra bundled up with me as we walked out on our frozen pond for the first time :) 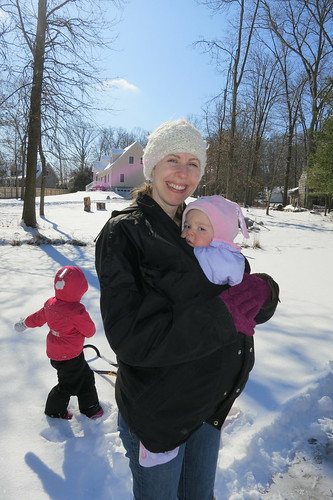 [Standing on our pond!] 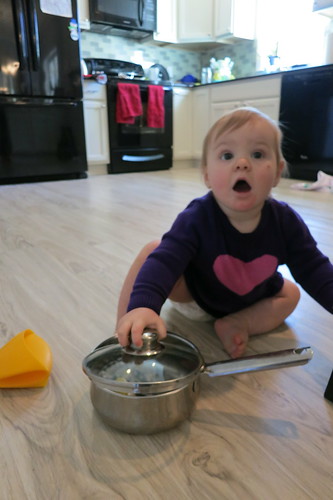