Audra was much more alert this week, as she was awake - and perfectly content - for an hour at a time a couple of times. We brought her in to Ryan's work last Thursday, and while I ate everything I could get my hands on (giving Ryan a much-needed break from cooking), Audra sat on Ryan's lap and calmly took it all in. Then when I got her back, we nursed a couple of times and then she looked more like this: 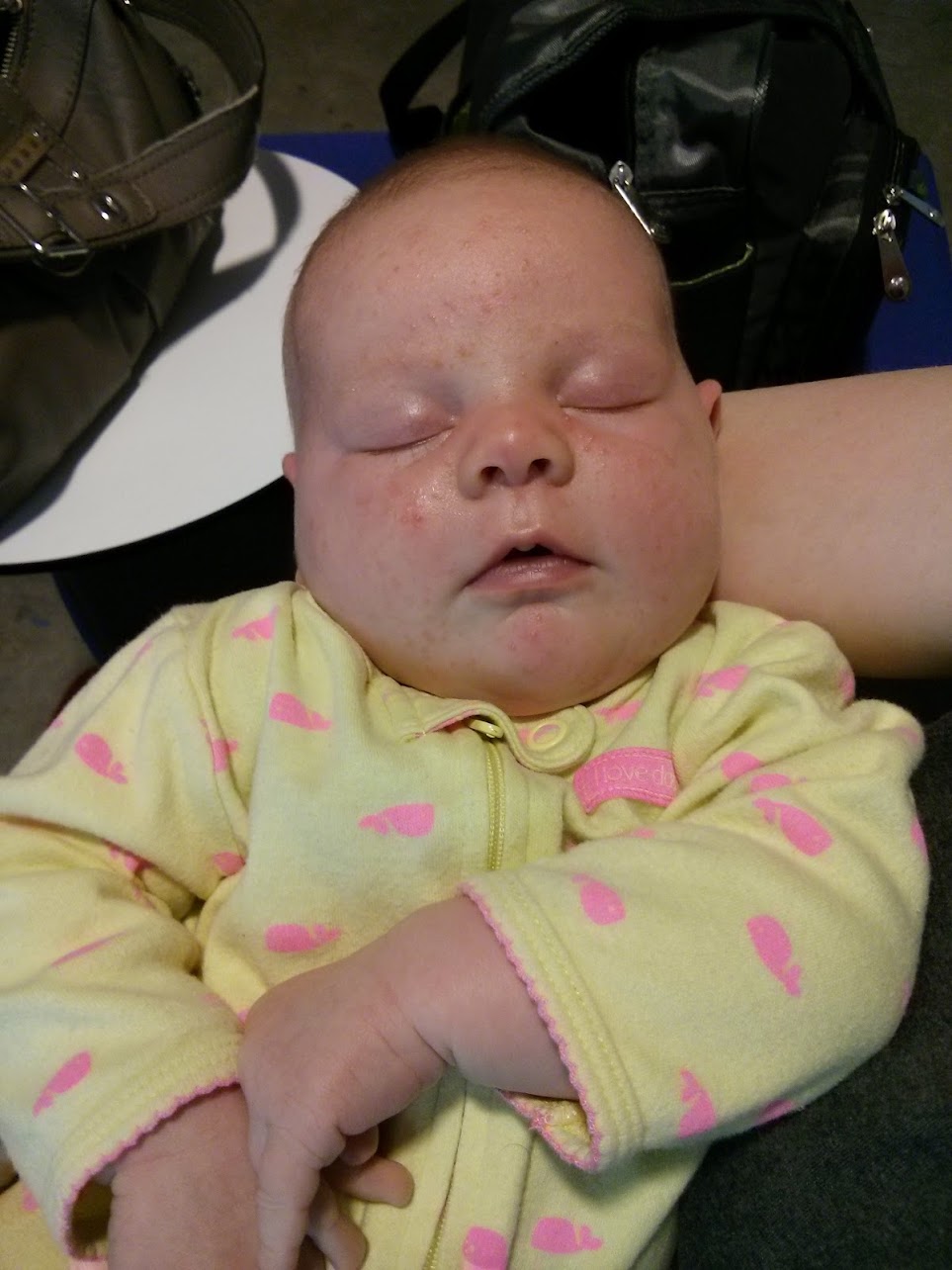 I kept looking at Audra this week and thinking she got so much bigger and filled out so much more. Her eyes also seem more blue now, and while her baby acne is still pretty bad, it seems to be lessening a little bit. She's pushing off us more with her legs, too, so I'm having to be a bit more careful to keep both hands on her when holding her so she doesn't launch herself off me. After not smiling for a few days, Audra had big smiles (or "big happy", as Josie likes to call it) for my mom and aunt when they came to visit this weekend :) And yet I still have no pictures of her full smile, just her goofy half smiles - hopefully soon, because it's super cute. She also likes to put her face on mine when I burp her, which so far is utterly adorable, but will be decidedly less so once she actually spits up on my face ;) 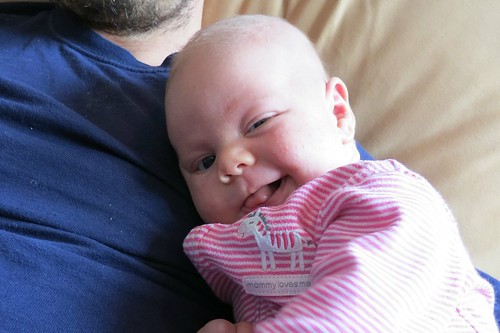 Speaking of which, Audra really doesn't spit up that much, which is really nice. I preemptively cut dairy out of my diet (for the most part, at least) right from the start, but she really doesn't seem to spit up that much anyway. She has been more fussy the last few days, so I've been on an even shorter leash than normal - she usually wants to nurse about every 30-45 minutes when she's awake, but it's been even more frequent than that lately. If this isn't her 6-week growth spurt, I can't wait to see what is ;)

Audra only slept on her own a couple of times last week (and usually after I had already stayed with her for the first hour or so), but she did do a couple of nights with a 6-hour stretch (and only one wakeup!), and has slept in her swing a couple of times now. I am probably happier about the swing than I should be, since it's still a sleep prop that we'll eventually need to wean her from, but having that hour to myself as she napped in the swing made me so delirious with freedom that I didn't care :) 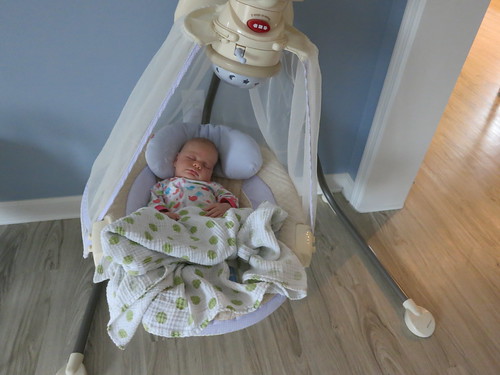 More of Audra's firsts from this week include her first trip to a sit-down restaurant, and her first illness :( Josie came down with something over the weekend, which spread among us in fairly short order. So now Audra is congested and fussy, and since Ryan and I have pretty bad sore throats and sinus pressure, I imagine she may be dealing with that too. We went to Chili's for lunch today, which was nice to get out of the house, despite feeling like my head was going to explode from the pressure. Audra did quite well, hanging out with Ryan for a few minutes, then nursing and sleeping on me and then in her car seat before she woke up from pooping (as she is wont to do). 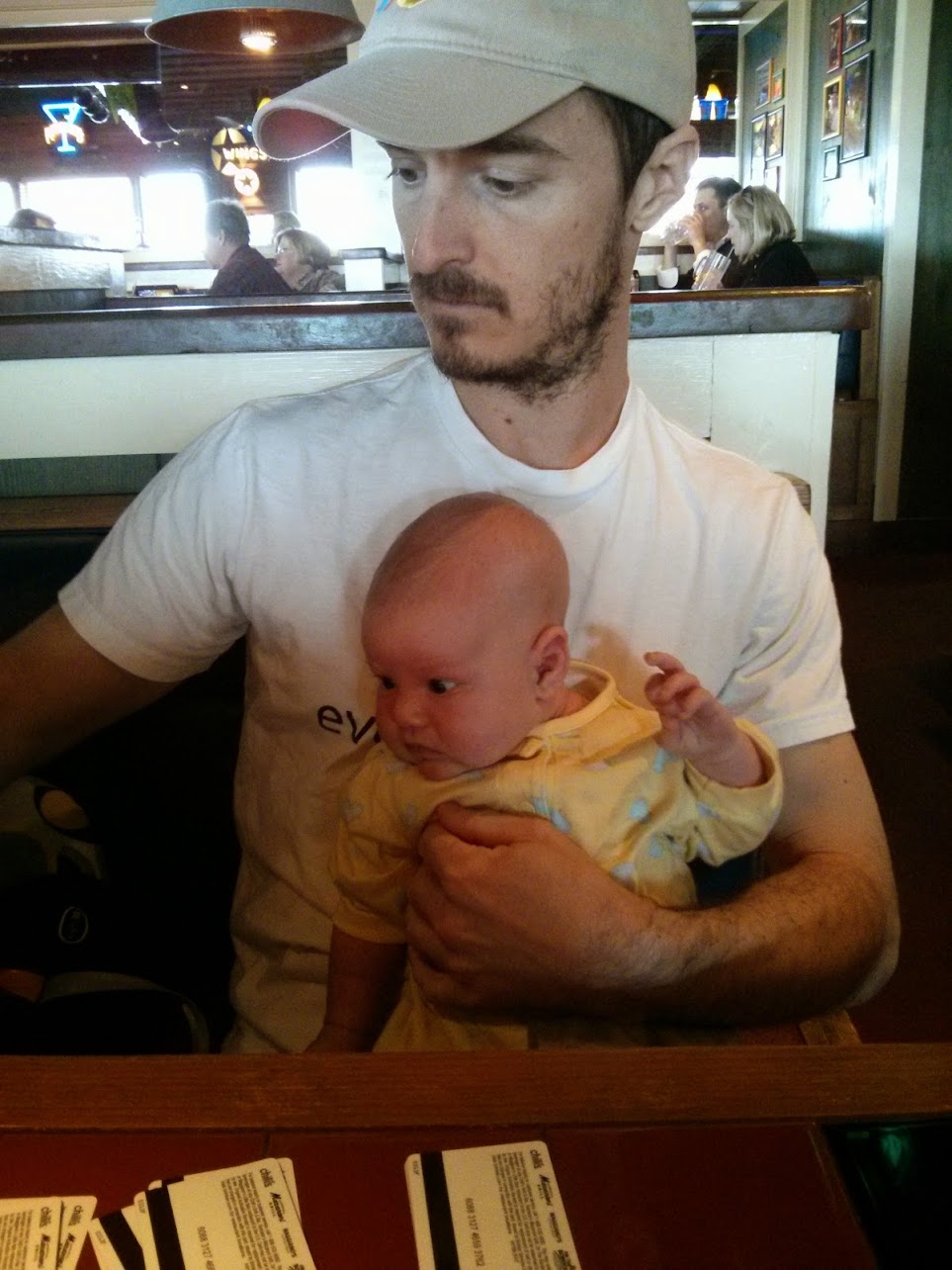 As for me, I actually had a couple of days of no crying this week ;) I feel like I have a much better handle on things during the week now, although the weekends are still really hard, with trying to have Audra get her naps in and still spend time with Josie. I know I need to try harder to not get frustrated over the things I can't control, but I think we'll get there. Hopefully soon. 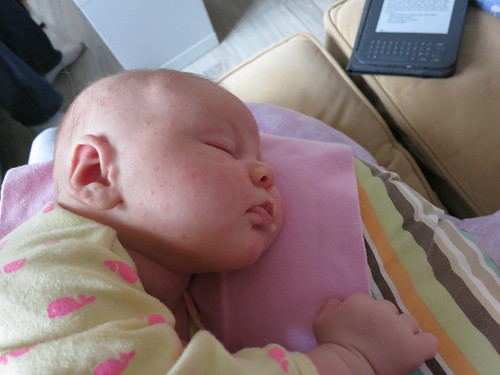 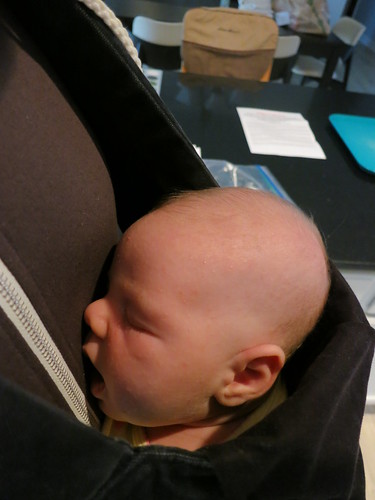 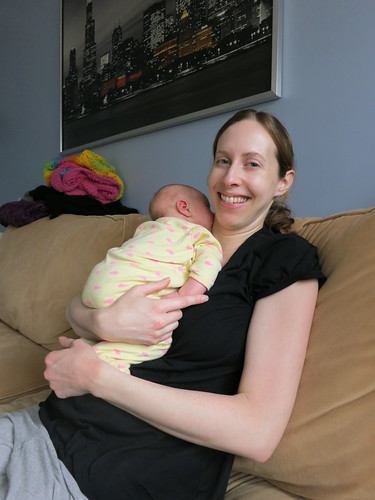