The theme of this week was getting out of the house: we took Audra in for a visit to my work, then to my final postpartum visit with the midwives, I took her to Mommy & Me yoga, and then we ate out and went shopping several times.

Audra did very well at my work - she was awake and calm for the first 45 minutes or so while everyone gathered 'round to ooh and aah at her, and then slept in Ryan's arms while I met with my manager to confirm my schedule over the next couple of weeks as I return to work. We then had to head straight over to the birth center for my last appointment with the midwives. By their scale, Audra is now up to 14lbs even :) They checked us over and said she looked great and I looked great, and just like that, our time under their care is now over. I'm taking it harder this time, and I'm not sure if it's because this is our last baby or because I bonded so closely with my midwives and the birth center experience as a whole (given that I was also there on a weekly basis for pre-natal yoga, and I met our doula through the center), but I'm pretty sad that I'll be saying good-bye to all the wonderful people there soon enough.

In the meantime, I'm trying to go to Mommy & Me yoga for the next few weeks until I return to work. My pre-natal instructor is doing that class too, so it was so good to see her again, as well as some of the other mamas that I got to know during the pre-natal classes, and my old Bradley instructor from my pregnancy with Josie :) So we went to one class so far, and Audra basically slept through the whole thing except for the last 15 minutes or so, waking up in time for a diaper change, nursing, and then final relaxation pose :) Unfortunately, although she did awesome in the car on the way there, she cried really hard most of the drive back home :(

The sleep update for this week is that Audra actually slept on her own for a bit most mornings after I got up. She is napping slightly better now, insofar as she is actually napping again. However, except for a couple of exceptionally sleepy days, she still is needing more assistance to get asleep and stay asleep than she did before the last couple of weeks. So pretty much every nap was either on me or in the carrier, and we even planned some leisurely trips to Wal-mart and Lowes so we could get some shopping done while she napped in the carrier.  At least she seems to be doing better with noise during her naps, and so she was able to tolerate sleeping on me while I was in the living room with Josie running around, which is preferable to me being secluded in a bedroom for most of the weekend. 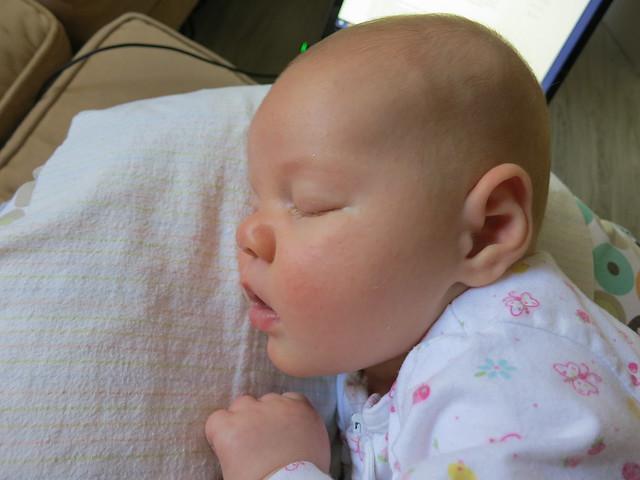 After reminiscing about some of our more difficult nights with Josie and feeling lucky that we hadn't had any of the same with Audra since her first couple of nights... she had a difficult night getting to sleep, where it took about four hours before she finally fell asleep around 1:30am :-\ On the other end of the spectrum, though, Audra also had her longest stretch of sleep yet this week, going just over 7 hours before waking me up to nurse. Of course, I wasn't able to enjoy this beautiful, uninterrupted stretch of sleep, since I woke up once to pump, twice because of a painful crick in my neck, once because of a tickle in my throat (and I managed to spill water all over my pillow when I tried to take a sip of water to relieve it), and once because of a bad dream. Sigh.

Audra laughed again in her sleep, but no awake laughing quite yet. She is also mostly out of her 0-3 month clothes already, the overachiever ;) She seems to be more aware of things now, and will zero in on me when I walk past her or say her name. She has also been much more fussy while nursing lately, so I'm thinking it may be a side-effect of her doing better with taking a bottle and/or that she's working on some developmental stuff. She's supposed to be starting to recognize patterns now, which includes physical patterns like kicking and flailing... and given the amount of kicking she did last night, it's a definite possibility that she's working on that now. 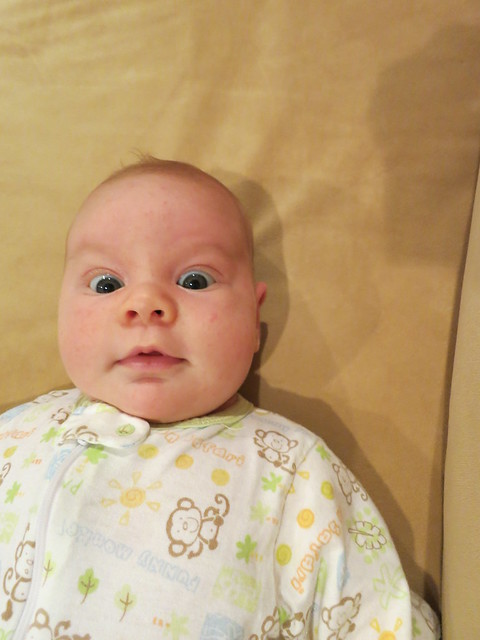 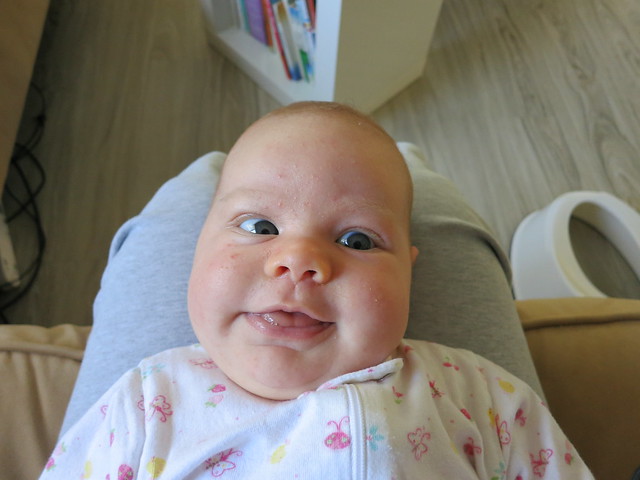 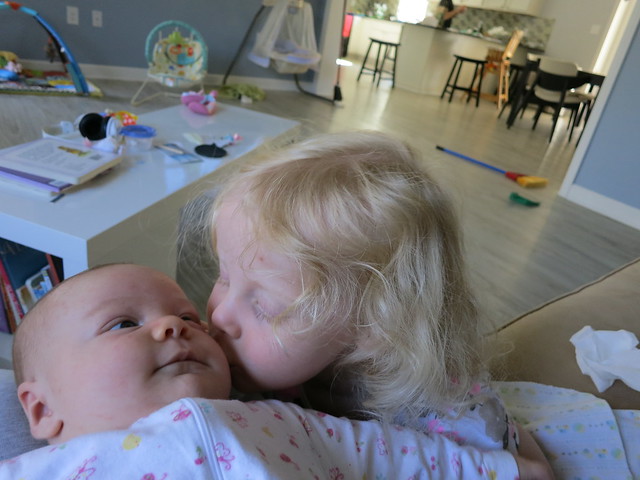 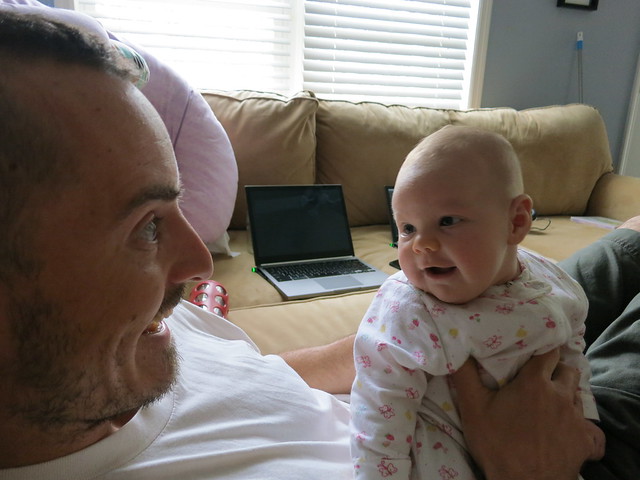 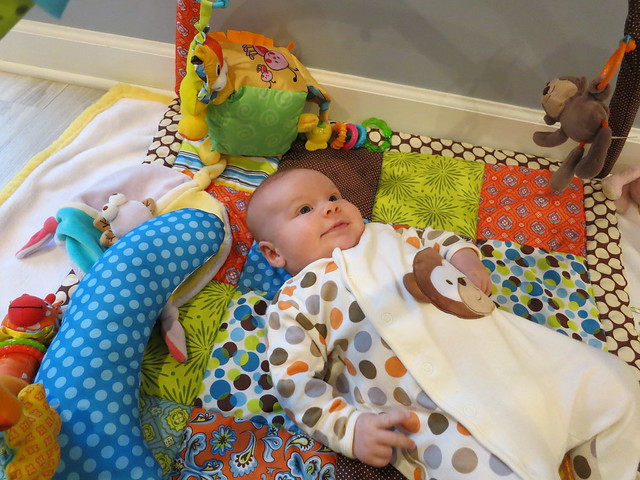 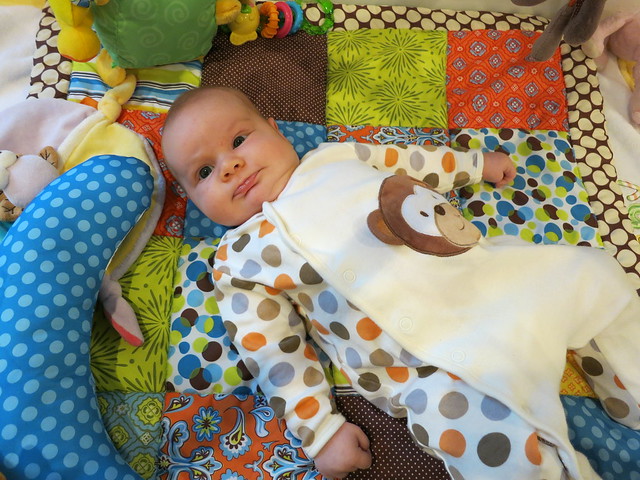