This week was pretty good, despite the continuation of Audra's disinterest in sleeping ;) I'm also feeling almost entirely back to normal emotionally and physically, which I've realized in part since I'm talking/obsessing about Audra's sleep less (yes, despite written evidence to the contrary!).

It seems pretty clear to us that Audra is working on stuff developmentally, given the difficulty she's having napping, how alert she is during the day now, and how she seems to have lost her single-minded focus to nurse at every given moment. In fact, she's actually gone over two hours now during the day before she's needed to nurse again! :) At night, she's also spaced out the feedings more, still going about 5 hours before waking up the first time, but now going a bit longer before waking up the next time - sometimes only an hour still, but sometimes 3+. And she's also more content being awake after waking from her naps without eating first, rather than only directly after nursing. But while she is most likely to take a nap in the mornings, the rest of the day is usually spent wearing her if we have any hope of her napping... and even then, a lot of the time now she looks like this instead of asleep: 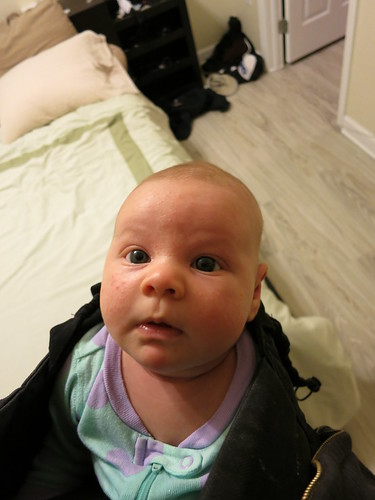 After a couple of false starts (apparently I can sleep through my alarm quite well, just not Ryan's), I finally started pumping overnight. This is in part because I finally sat down to figure out how much more paid time off I have, and the answer was... not much. Like, a lot less than I thought, to the point that we couldn't justify me taking it unpaid as we originally planned. So after a flurry of emails with my work over the past week, the new plan is for me to start working a few hours a week starting now and going until my PTO runs out, going in the hole for another 20 hours, and then doing a couple of half days before returning full-time on May 14. Audra will be 10 weeks old then, so it's still a couple of weeks fewer than I had planned to take off, but at least it's better than having to go back over a month early, which is what it would have been without this workaround (as it turns out, company policy wouldn't let me use all of my PTO/go in the hole unless I came back from leave first). So given that I'll be heading back to work sooner than planned, I needed to get pumping so we could start Audra on bottles and so I'd have something to send to daycare with her on the first day. Ryan gave her her first bottle last week, and she wasn't really a fan, so we'll also need to give her more opportunities to practice over the next few weeks. 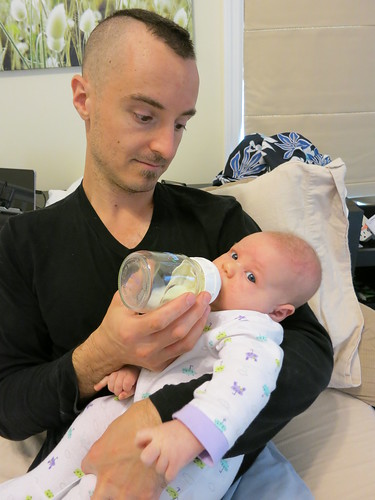 Since Audra will be going to the same in-home daycare that Josie went to, we know more what to expect and what to try to prepare her for. We're trying to make the transition as easy on her as we can, so we realized we needed to work with her on bottles and getting her used to a swing or bouncy seat more (also since that's likely what she'll be put to sleep in at first at daycare), and that's why we're doing the two half days to start to see if that helps too. We also went to visit daycare this week, which made me feel even better about Audra starting daycare (and me going back to work). Audra charmed everyone by being super good for the couple of hours we were there, crying just when she woke from her nap and pooped, with lots of smiles and cooing aside from that.

And that's pretty much the story with Audra: she's not one for napping, but she's been a relatively easy and content baby. She mainly just cries if she needs to poop or if she's overtired, and she's usually quite happy being awake for far longer than she probably should be as long as someone is holding her. She can usually go at least 20 minutes in the swing or on her playmat before she starts fussing, and she's quick to sweetly nestle her head under my chin when I rescue her from said swing or playmat :) I'm hopeful she'll be laughing soon too, since she laughed in her sleep a couple of days ago :) And I'm also hopeful that we've stumbled upon a way to make car rides more tolerable - she has been crying less frequently in the car lately, but when she does get going, it's at levels that are borderline eardrum rupturing. But although she was starting to fuss a bit before we even got back in the car today, I opened her window and she didn't make a sound the entire 10-minute drive home, so hopefully that wasn't just a fluke :) 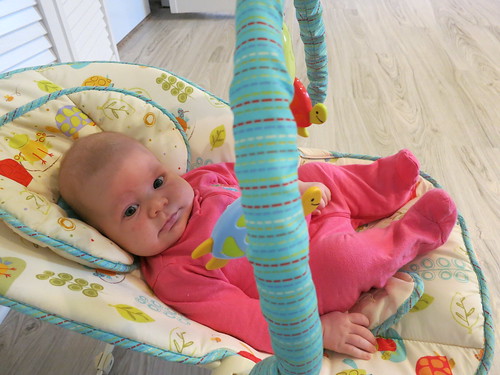 We hosted Easter dinner and the egg hunt again this year, which was a lot of fun. Audra did great, and it was wonderful to have so many hands eager to hold her throughout the day :) 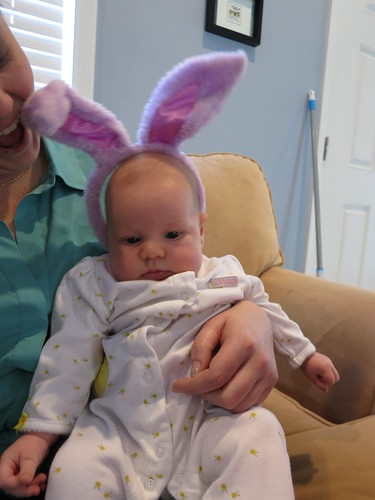 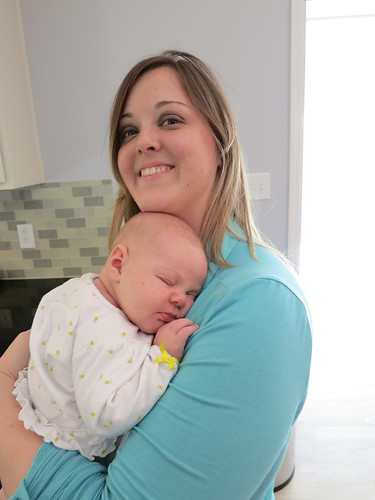 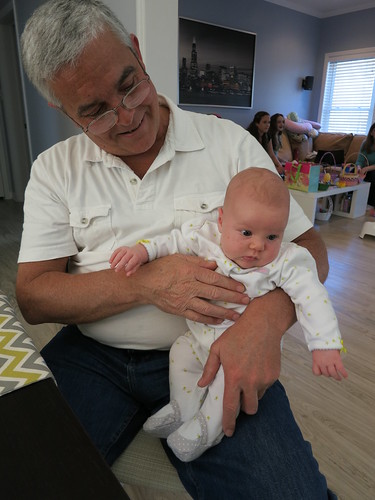 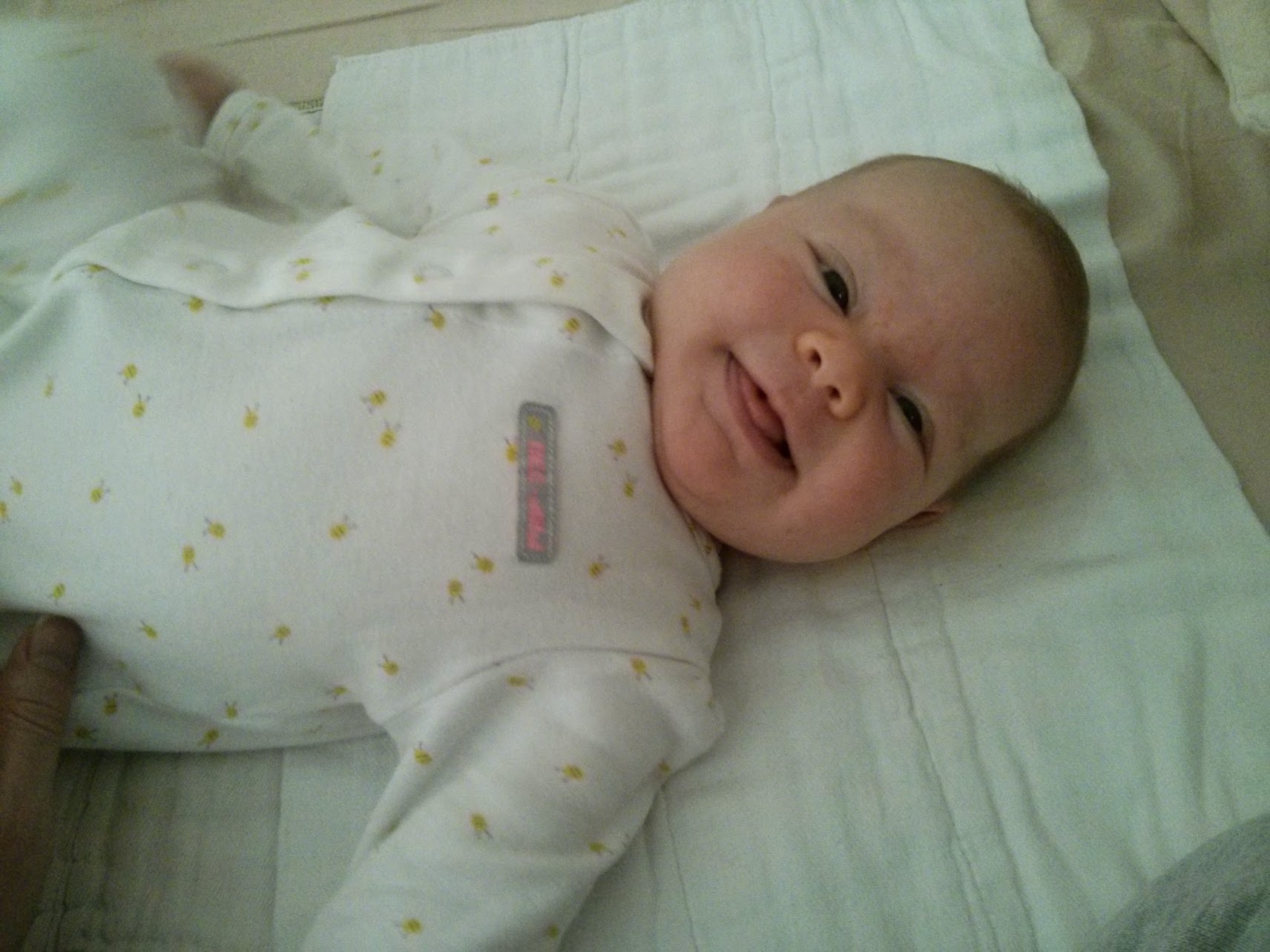 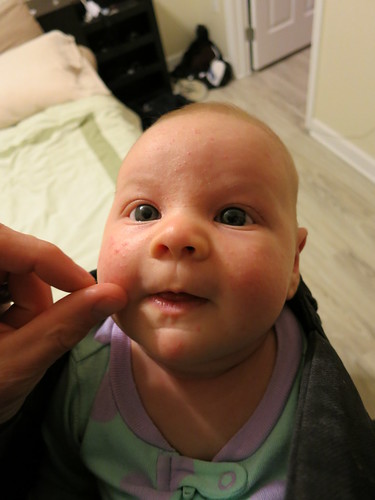 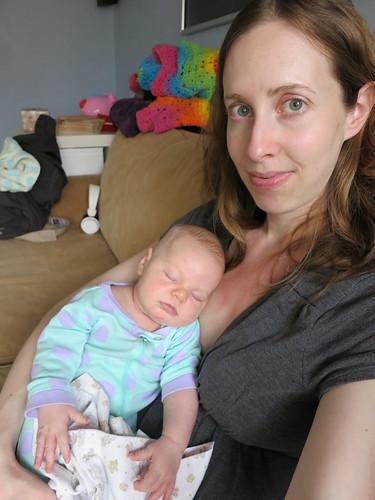