As it turns out, what's harder than taking care of a newborn (and toddler) is taking care of a newborn (and toddler) while sick. Ryan and I have been sick all week with a nasty cold, and Audra is having a bit of congestion still too. I'm having some difficulty trying to hold things together while dealing with the frustration and misery of being sick, and given some stuff Audra is going through now too, this was not an easy week - although there were some bright spots to it.

Audra continues to be more awake and alert, content to be up for over two hours... although the reason I know this is because she also is having some problems napping at the moment. Before, she had been awake maybe a couple of hours total throughout the day, and then awake most of the evening. But then this week, she just started struggling with naps, popping back awake after a couple minutes of sleep or just not falling asleep when she normally does to begin with (i.e., after nursing). She handles that quite well earlier in the day, but by evening, she's been an overtired, hysterical mess. At least her night-time sleep hasn't really suffered too much (yet). I start nursing her down just after 9pm, and she usually falls asleep and wakes right back up a few times, and sometimes nurses again a half hour after she first fell asleep, but then is usually asleep for the night by 10pm. She wakes 1-2 times overnight to eat (with the first wakeup between 1:30-4am), and then inevitably wakes up for the day around 7:30am when I try to sneak out to eat breakfast and see Josie off to school.

Audra also seems to be able to sleep through more overnight, which is good since I'm going to need to start pumping overnight soon, and we haven't started putting her in the crib at night yet (both were waiting until we were a bit healthier so we could feasibly deal with some interrupted sleep better). So she's slept through me getting up to try to clear out my nose (turns out I can't sleep if I can't breathe), shifting all over the place, dropping things, and coughing. So much coughing. Her sleep cycles also appear to have increased from 30 to 45 minutes, which is only exciting (to me) since it's evidence of her sleep maturing on its own. Since this is what our "strategy" is basically banking on (waiting for her sleep to mature on its own to hopefully resolve the early sleep issues we're possibly avoiding by bedsharing), it's heartening to see this happening. She also had a couple of good, 2-3 hour naps in her swing, but only managed 15 minutes of napping on her own on a flat surface all week.  But hey - it's something, and it was even in her crib so I was able to start my collection of slightly creepy monitor screenshots of her sleeping :) 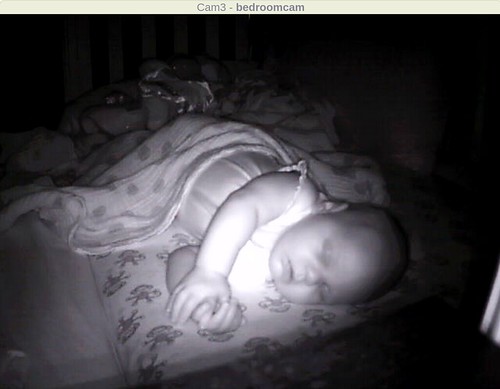 I can't tell if she is going through the big 6-week growth spurt yet, but with her disrupted sleep, increased fussiness, and changed attitude towards nursing lately, I'm hoping this is it. I'm fine with constant nursing, but angry, screaming nursing is much harder to deal with. I happened to stumble upon a blog post that advised switching sides every 15 seconds, if needed, if baby is fussing, and this has really helped us out. Audra still erupted into hysterical crying when I tried to nurse her the other night (only calming when Ryan took her out for another walk in the carrier), but for the most part, switching sides more often than I would normally seems to be helping her calm down enough to nurse (and sleep).

Ryan was out of town Saturday, so my mom stayed over to help me with the kids. I had been worried about this weekend for a while, but figured it would also be a good opportunity to work through (and get past) some of those worries. My biggest worries seem to have boiled down to Ryan being gone, Audra not sleeping, and not having anything planned to occupy Josie on the weekends. While my brother and sister-in-law helpfully took Josie out on Saturday, Audra's first difficult napping day happened to be that day, which, of course, was also when Ryan was gone. So that was a bit of a rough day, but we obviously all survived, and hopefully I can stop worrying so much about those things :)

I also have started carrying Audra in the carrier more, which I had been avoiding until now to let myself heal more. That helped with my mental state last weekend too, since for some reason I just feel so much more capable and like I can deal with things better when it's nice out, I have a sleeping baby in the carrier, and I'm able to eat and drink and spend time with Josie - sometimes all at the same time :)

And although we had sworn that we wouldn't eat out with both kids for months (or years), we went out to eat last weekend once Ryan got back. We survived that too :) Ryan ended up walking Audra around outside for the second half of the meal, but honestly, I think he had the easier kid at that moment ;) But we also walked around the town center where the restaurant is after our meal, and enjoyed the beautiful weather while Josie played some games and I nursed and cuddled with Audra. Who also smiles and coos now :) 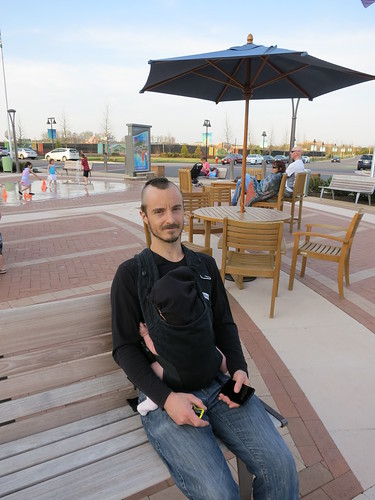 [At the town center, with Ryan's Mr. T-inspired haircut ;)]
[Not the best example of her cooing, but it's all I've been able to record so far] 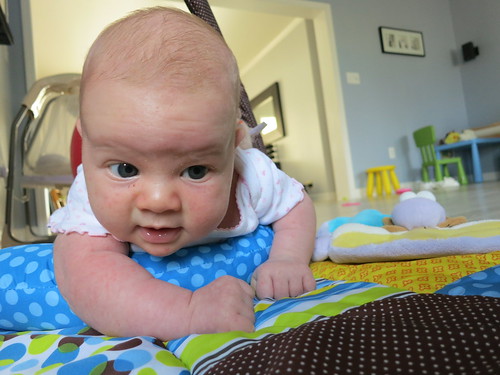 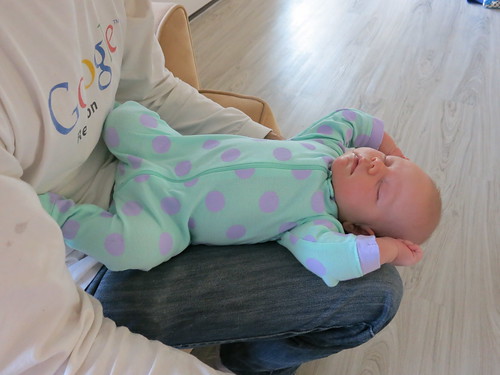 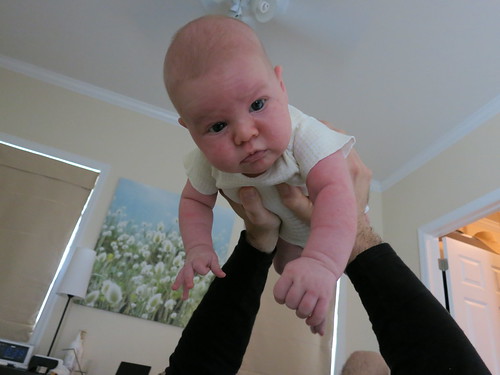